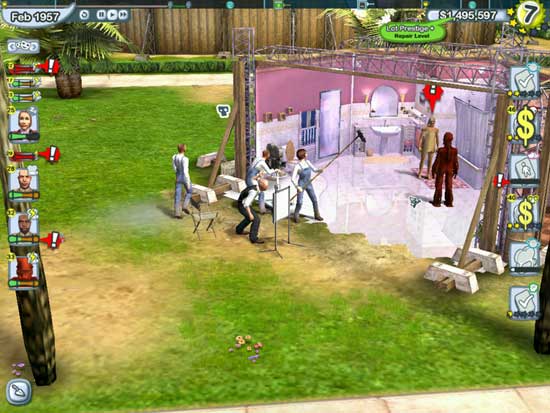 After all the mystery surrounding what must be Lionhead’s least hyped game, after all your expectations of cinematic glitz and glamour, your first experience of The Movies might be one of mild disappointment. Stick with it. The Movies might look like Theme Park given a cinematic spin and a 2005 makeover, but it’s so much more than first appears.


You see, when the initial tutorial takes you through the basics of running a studio, you’ll be hard pressed to see what makes The Movies different from the average Tycoon game. As with Theme Park, so many years ago, it still seems a case of building resources (the sets, production and staff offices, makeover departments, restrooms, bars and restaurants), adding decorative features (seats, plants, fountains, statues, trees) ensuring your team all pull their weight, everyone is happy, and that paths link everywhere up in the most efficient manner possible. Yes, there are scripts to be written, roles to be filled and movies to be made, but if you were expecting something substantially different to the usual tycoon formula, you might come away feeling short-changed. 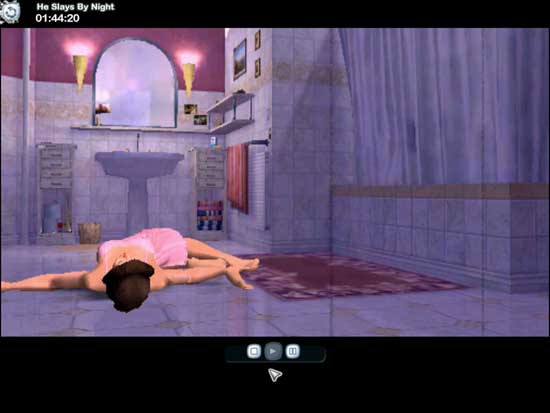 But let’s not be so mean: even if The Movies was just a tycoon sim, it would still sit somewhere high above the average. For a start, check out the graphics. Barring Rollercoaster Tycoon 3, The Movies is easily the most attractive tycoon game in town; brightly coloured and slightly cartoony in the best Theme Park tradition, but with a level of detail that goes far beyond anything we’re used to. Somehow, the engine handles scores of characters onscreen at any time – stars, crew, maintenance, flunkies – while managing to imbue each with real personality. You can zoom in from the standard birds-eye view, then get right down to ground level. Watch the assistant call action and work the clapperboard, a drunken star stagger onto set, and the whole cast and crew going through the motions as they shoot the take. You know it’s just Hollywood razzamatazz, but it doesn’t half make you feel involved in this odd way of life. 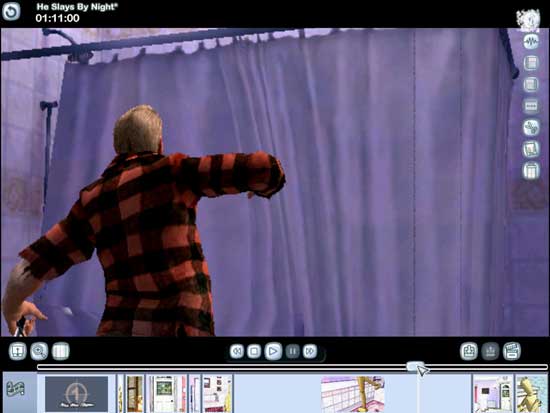 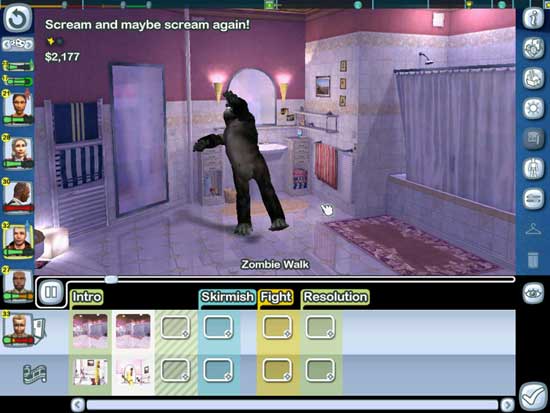 What’s more, Lionhead’s interfaces seem to get better with every game. The Movies gives you a wonderful example of how a little thought and some clever use of context-sensitive control can break down the barriers between the player and the game world. Want to make a star? Drag a waiting wannabe into the stage school and drop her in the relevant room. Want to write a script? Pick up a writer and put them in the room captioned with your genre of choice. And to turn that script into a movie? Pick it up, put it in the casting office, drag your stars in from their icons on the left side of the screen, and preproduction should begin. When rehearsals finish, drag the movie’s icon into the Start Shooting room. It’s that easy. 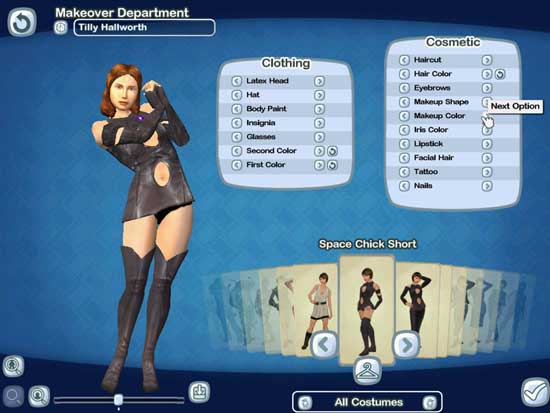 Plus, most of the information you need can be found without having to open a single clumsy status screen or menu. Hover the pointer over a star, and you get info on their current work, their mood and stress levels, any addictions to food and drink, and how they get on with the other characters in your stable. It’s wonderful stuff.


And that’s lucky, because there really is an awful lot to do. Pushing movies through production only takes up roughly 60 per cent of your time. The rest, you’re kept busy building new sets, researching genres, effects and techniques, managing the talent and ensuring they’re in a fit state to give their best performances, hiring maintenance staff, film-crew and assistants, and just making sure your studio lot reflects the developing grandeur of your studio. This last factor is more important than you might think, as the more luxurious your studio, the more likely you are to attract new talent to work in it. 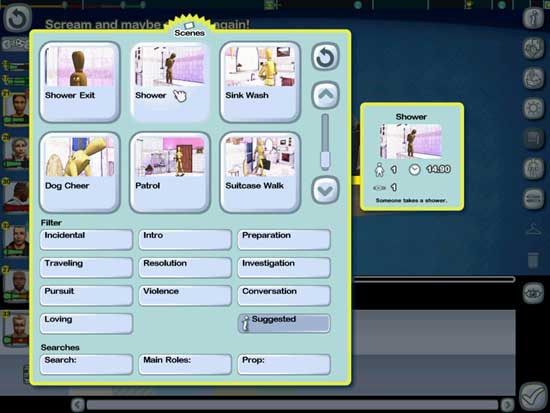 To be perfectly honest, just managing your stars is work enough. Not only are they neurotic, insecure and fiercely jealous of each other’s salaries, trailers and entourages (which you had better set about providing), they also need regular image updates and help with alcohol or eating habits. If you’re a studio boss in the classic David O. Selznick mode, you can even control their hair, make-up and dress to the Nth degree (real men will head straight for the auto-makeover option). 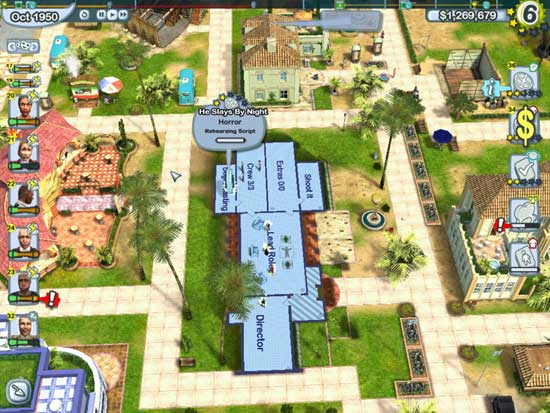 Three things ensure that all this is more fun than it otherwise might be. Firstly, there is a real sense of achievement when you get your first few movies made. You keep your fingers crossed when the ratings come through, wince at the critical reviews, and thrill when it hits the box office with a splash. After a while, the novelty wears off a little, and its then you notice the game’s very British sense of humour: the excessively lavatorial notices when a star wanders off into the rest room, the oddball comments from the radio announcers that perfectly lampoon the anti-cinema snobbery of the 20s, or the McCarthy paranoia and moral hysteria of the fifties. People had fun when they made it, and wanted you to have fun when you played it.


However, the best thing is that the game is informed, through and through, with a real love of old-fashioned Hollywood magic. It’s there in the symphonic themes, the titles, the creaky old Flash Gordon sets and western saloons, banks and street scenes. If you love the movies, you’ll love The Movies. It’s as simple as that. 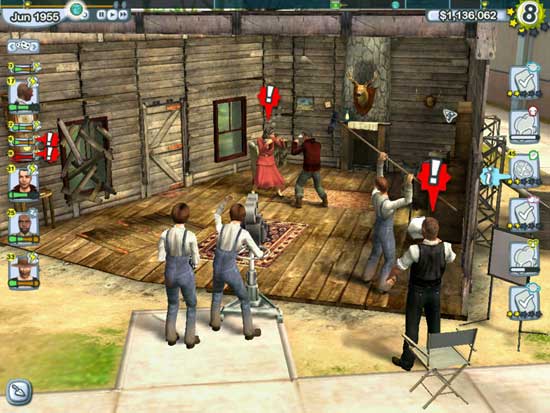 But is it a love that lasts? As a Tycoon game, The Movies does have its problems. Like Theme Park before it, there’s a time when the thrill of new movies, new sets and new stars wanes, and it isn’t helped that after thirty years or so of game time, the whole thing starts to snarl up. Your stars become a little too difficult, it seems impossible to keep them working or help them build relationships with each other – one of the essentials of decent movie-making, it appears – and the game gets stupidly stingy with new recruits. You might think wannabe stars would be queuing up all the time, but you’re wrong, and other essential workers are just as difficult to find. It’s quite possible that I’ve been doing something horribly wrong, but this problem isn’t even realistic. When the Hollywood studio system was at its height, few stars had careers playing basically the same roles that lasted for decade after decade, and there was always a new wave ready to replace them. So why all the shortage of talent looking for work? 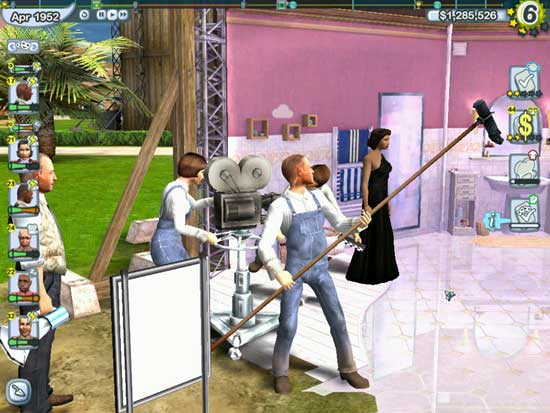 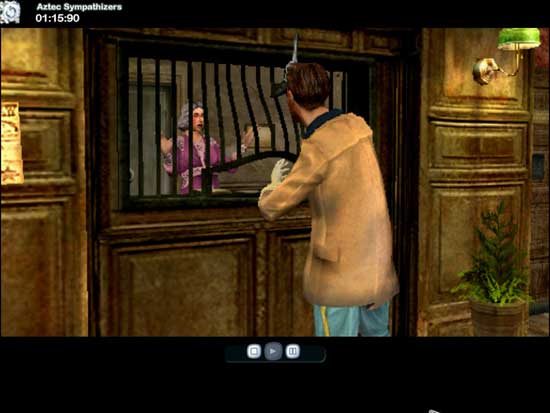 Luckily, it’s just when frustration creeps in that the real magic of The Movies makes itself felt. By opening up the Advanced Scriptwriting and Postproduction offices, you can take the sort of hands-on, total control of your product that even Harvey Weinstein would envy. The Advanced Scriptwriting module has you naming your film, picking your genre, then building your movie scene by scene, changing cast, wardrobe, props, lighting and camera angles as you see fit. Then, once the film is in the can, you can drag it into Postproduction and chop scenes, rearrange them, alter the music and – if you really want to go crazy – dub on your own dialogue and sound effects. The program even does its best to lip-synch the dialogue (though for reasons of my own embarrassment, I haven’t spent much time in this department). 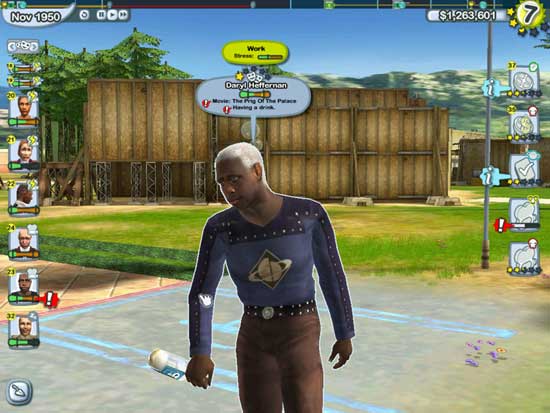 Admittedly, your efforts don’t seem to bear a huge amount of fruit when it comes to box office or critical reception, but then that doesn’t really seem to be the point. What is? The online export option. Just post your film onto Lionhead’s website and you can share it with adoring multitudes of other Movies fans. Now, it’s impossible to predict whether making movies with The Movies is really going to take off and grow, but I have a feeling that it might. There are thousands of keen movie-goers and DVD buyers out there, and a lot of people who fancy a quick and easy way of making cool, animated movies that let their creative side run free. The Movies lets you do just that, and it’s a whole lot easier to do than with any real film-making or animation app that I could mention. There are some quibbles – surely the program could take better care of costume and hair continuity than it does – but it’s a brilliant way for enthusiastic amateurs to get closer to the process of making their own films.


And it’s this aspect that will keep you at The Movies long after the appeal of the tycoon gameplay has worn off. In other words, The Movies isn’t a disappointment after all – beneath the Hollywood glamour, there beats a heart of solid gold.


The main tycoon game has some problems, but once you get into making your own movies, you won’t leave The Movies alone.