Sometimes, it’s a mechanic that makes a game – and in The Messenger, it’s the ‘Cloud Step’. It’s the first thing you’ll learn: when you hit anything with your sword whilst mid-air, you gain another jump. Simple, but this opens up a whole world of platforming possibilities from the get-go, and The Messenger quickly goes about testing your skills with some devious, Ninja Gaiden-esque action.

The Messenger tasks you – the titular Messenger – with taking a scroll to the top of a mountain to save your people from destruction. The big evil fights with the legendary ‘Hero from the West’, and so begins a series of fiendish platforming levels very much in line with classic NES titles. Spikes are murder, bottomless pits are plentiful, and enemies are more about obstructing your path as much as they are actually attempt to kill you themselves.

To help you get through you’ll discover a shop at most save points, where you’ll meet a hooded shopkeeper, who can sell you new abilities and tell you bad jokes (more on this later). You pay for the abilities with ‘Time Gems’ found in the levels – similar to Sonic’s rings – or by dispatching enemies.

The smart thing about these abilities is how they all feed back into the ‘Cloud Step’. For instance, the first ability I purchased allowed me to attack enemy projectiles. Useful, because there are a lot of enemies that fire projectiles at you!

Within a screen I realised that this now gave me another thing I could gain a double jump off, and suddenly I started noticing alternative routes through areas. I began thinking, “Sure, it might be difficult, but if I use an enemy fireball to bounce over to that candelabra, which I can hit and use to get onto that high ledge…”. I was usually rewarded with a secret area, or simply a shortcut past a difficult section. 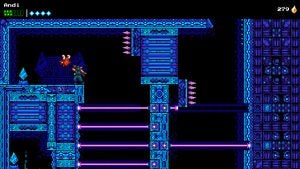 Sure, there’s the usual health and damage boosts, but items such as the Grappling Hook, which can grab walls, enemies and other things, and the wingsuit, which gives you the ability to glide by holding jump, all give The Messenger more ways to utilise his movement and that main navigation tool.

This also gives the developers carte blanche to create some truly devious sections –because, ultimately, you have all the tools at your disposal. At times, it can be a brilliant test of skill akin to Super Meat Boy and its ilk.

And, much like Meat Boy, it’s tough – and you will die. Plenty of times. Death sees you greeted by a little red imp called Quarble, who saves you from an untimely demise. He follows you around for a bit once you respawn, collecting any Time Gems you come across as ‘payment’ for his services. You don’t lose any pre-existing Time Gems, but you simply can’t acquire any more until Quarble has had his share.

In a game where you die this much, it’s about the right level of punishment. You don’t get sent back so far it’s a chore to try again, and although you’re inconvenienced by dying, you’re not robbed every time you make the slightest mistake.

Bosses are also classic pattern recognition big boys, firm but fair challenges that seem tough at first but, by the time you’ve bested them, they were mastered and almost easy. The difficulty slowly cranks up through the first few hours of play, and with a real challenge at the top of the mountain waiting for you, the first half of The Messenger – the NES half – is cracking. 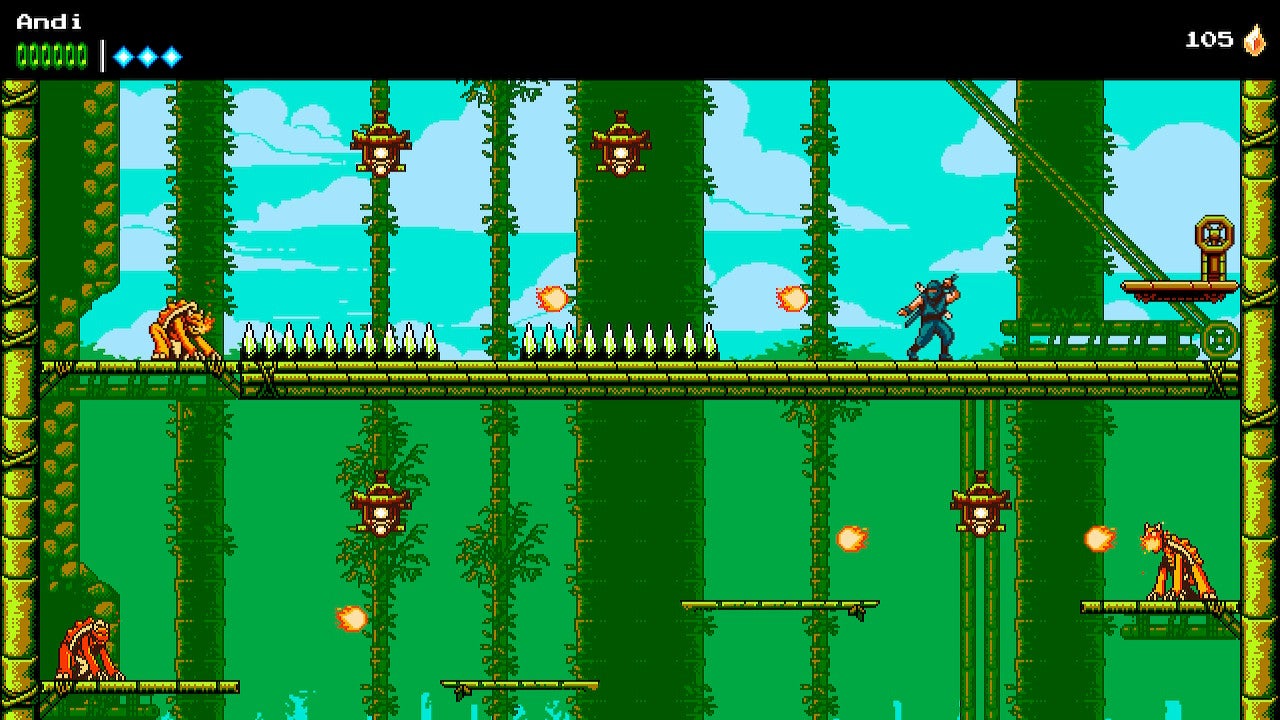 Now, I feel the following should have been kept a surprise, but since it’s such a key component, it couldn’t be left off trailers. At the halfway point, The Messenger shifts gears and jumps forward from the 8- to 16-bit era of gaming, with an appropriate visual change that takes place alongside.

At first, this appears to be a purely visual thing, but there’s far more to it. It has you revisiting old stages, where you can use the abilities you acquired through the game, and time rifts that allow you to jump between the two timezones to solve puzzles and find new items and areas.

It’s also a jump from the 8-bit era of platforming to the 16-bit era of exploration, with Super Metroid a clear influence. Seriously – if this hadn’t been used in the marketing, with a brave decision taken to keep it a secret, this would be at ‘Inverted Castle in Symphony of the Night’ levels of cool.

Jumping between the timezones isn’t always as simple as one or the other; there are parts where you can trigger warps that allow specific sections to leak through from one plane to the other, with say, platforms from one timezone appearing in another. Not surprisingly, given the quality of the game leading up to this stuff, it’s used in really creative ways – and even when it’s staggeringly difficult, it never feels unfair.

About the only real issue with The Messenger is the writing. It has a lot of fourth wall breaking, references to pop culture and other games throughout, and there’s always a punchline at the end of most interactions – especially with the shopkeeper.

Some of it works – there’s a particularly good gag involving a cupboard – but it’s a bit hit and miss, with a truly cringeworthy ‘Did you just assume my banter?’ line providing a particularly unfunny point. Honestly, your mileage may vary with this stuff, but for every chuckle there were an equal number of eyerolls. 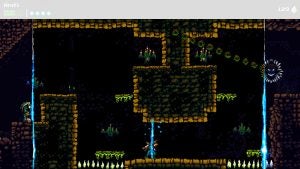 Despite the writing, which is definitely an acquired taste, The Messenger is a truly excellent classic platformer and a bloody good Metroidvania. There’s enough of a twist on both genres to make it stand out in an increasingly crowded market. It looks great, in both the 8-bit and 16-bit sections, and the music sounds like it’s ripped from the best NES game never made.

It treads the challenge tightrope with confidence, giving you a simple base of actions to get through anything it throws at you. It allows you to upgrade in a way that opens up more options, rather than simply making things easier. The game never feels unfair, even when you’re being killed over and over again, because it feels so tight and responsive.

The Switch has become a bit of a hotbed for this type of game of late, and The Messenger can stand shoulder to shoulder alongside titles such as Hollow Knight and Dead Cells. A must for fans of the genre, and a very strong recommendation for everyone else.