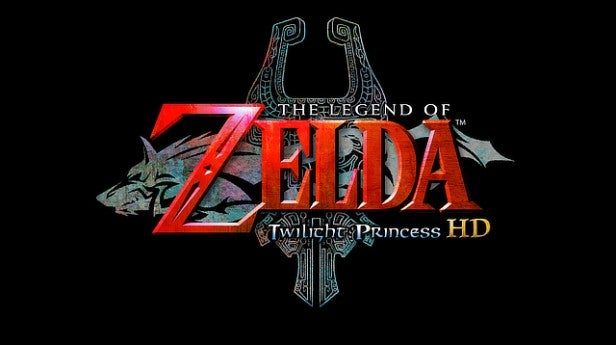 Exclusive to Nintendo Wii U
History hasn’t always been kind to Twilight Princess. Lauded at launch for its return to a ‘grown-up’ style after the cel-shaded, cartoon visuals of The Wind Waker, it’s now dismissed by some fans as a flawed, forgettable reworking of the legendary Ocarina of Time. For a game that was once hyped as the best Zelda ever, it’s rare to find it now in many people’s top five, while even those that love it will have few nice things to say about the Wii version; an early Nintendo experiment in motion controls.

Yet, updated and improved for this HD remaster, Twilight Princess stands revealed as a richer, stranger game than the one you think you remember. It can be awkward, confused and occasionally broken, but also bold, ambitious and epic in its scale. It’s no Ocarina of Time, but then, what is? 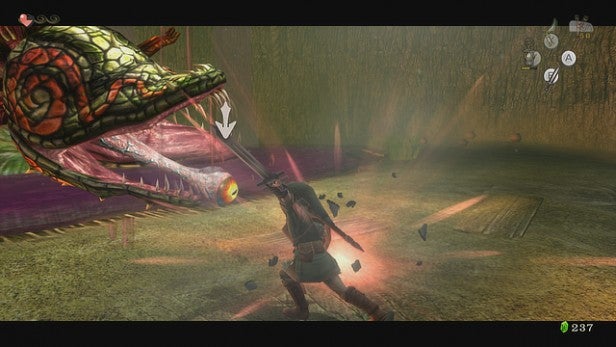 One thing’s for sure; it’s never looked better. The HD remaster isn’t quite as dazzling as The Wind Waker’s, partly because the latter’s cel-shaded graphics have dated better, and partly because there have been fewer enhancements to what was an already decent lighting engine. All the same, the combination of a crisp 1080p presentation, improved lighting and the widespread replacement of low-res textures with new high-res assets has done wonders for Twilight Princess’s visuals. With the scene and character geometry unchanged its still clear that you’re playing a decade-old game, and some of the ground and cliffside textures are horrifically bland. All the same, Nintendo’s strong production design consistently shines through.

And what a strange and brilliant design that is. Generally speaking, Nintendo’s biggest games look and feel like they’ve been conceived in a vacuum, as if the teams are dimly aware that other games are being made, but not to the extent that you might notice. It’s hard not to see Ico in the ornate, crumbling architecture of the land of Hyrule and the baroque designs of key characters and monsters, while Capcom’s Okami – the best of all Zelda wannabes – must have influenced Link’s wolf form and some of the Twilight stuff. 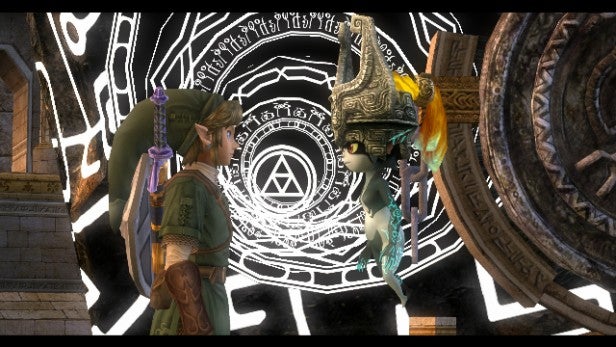 We might be mistaken given the timings, but there are even shades of Shadow of the Colossus in one or two boss battles, while the big action set-pieces – particularly the repeated bokoblin battles – feel like attempts to replicate the cinematic feel of the era’s blockbusters. Yet Twilight Princess still feels distinct, continuing the Japanese-meets-Celtic fantasy motifs of The Wind Waker, but then throwing on a weird country n’ western vibe. Link doesn’t don a Stetson and start packing six-shooters, but it’s a close-run thing.

In other ways, this is a more traditional Zelda. All the nautical trappings of The Wind Waker are gone along with the cel-shaded looks, and an older Link is back on horseback, roaming a recognisable Hyrule that’s a distant, age-worn cousin of Ocarina of Time’s. The structure is familiar, too, with a recognizable villain, the need to accrue powerful weapons to defeat them, and the classic dungeon-focused plotline. One dungeon leads to the next, each one containing some new gizmo to be used to reach and defeat the boss, before opening up new areas of the map and leading you on to the next part of the story. Of course, being Zelda it’s not quite that linear. There are numerous side-quests to follow, items to collect and secrets to be discovered, all in a world that isn’t by any modern definition open, yet still feels wide and immersive. 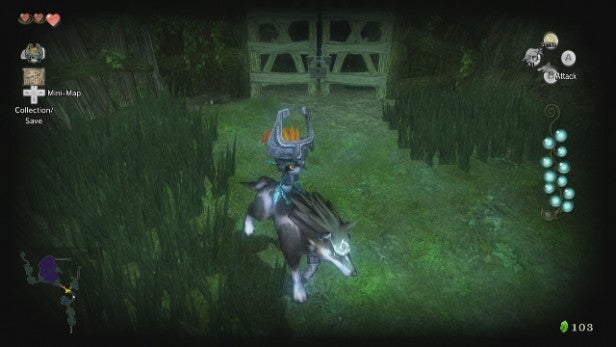 Yet Twilight Princess messes with the formula. It actually takes a surprisingly long time to get going, with several hours of play before you even hit the first real dungeon. Instead, you’ll be getting used to a new companion, the pint-sized shadow sorceress, Midna, and the twilight; the creepy scourge that darkens Hyrule and transforms its people into insubstantial spirits. The twilight also has the nasty side-effect of transforming you into a wolf, meaning you’ll spend substantial portions of the game bearing Midna on your back, roaming small chunks of Hyrule without the benefits of all that famous Zelda kit. Sure, you can bite and howl tunes, but even getting into buildings poses problems.

This also means that, before each of the early dungeons, you’ll have to spend time collecting ‘tears of light’; little droplets of magical light found by tracking down the twilight’s invading insects and taking them out. Nintendo has wisely reduced the numbers of these in the remaster from the original 16 per area, but these sections still feel like unnecessary padding – and in that they’re not alone. While all Zeldas involve some between-dungeon questing and collecting, Twilight Princess goes massive on this stuff, filling up each interval with a shopping list of people to help, things to collect and obstacles to move. 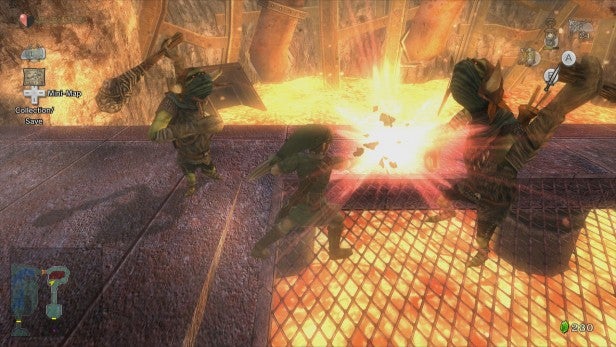 Too much care has gone into this stuff to make it tiresome, but some of these activities were clearly added to showcase what was new and radical about the Wii’s motion-sensitive controls. We get flying sequences, feats of marksmanship and running battles waged while protecting a stagecoach, with each one having one thing in common: they were tricky with the Wii remote, and they’re not much fun on a conventional gamepad. Sequences clearly meant to be cinematic spectacles now feel intrusive, like they don’t really belong with the rest of the game. Worse, they expose weaknesses in the controls, as you wrestle to switch camera angles or view modes while trying to tackle an already awkward task. That’s a shame, as most of the time losing motion controls has made Twilight Princess an easier game to play, with targeting and combat tighter and less prone to silly errors.

But if Twilight Princess can be ridiculous, it can also be sublime. The dungeons are among the best of any Zelda, each one throwing in new tricks and new mechanics to keep you thinking, puzzling and on your toes. Sure, some like the Lakebed temple are variations on established hits like Ocarina’s water temple, but they work on a bigger scale and pack new mechanics, obstacles and monsters. Others, like the Goron Mines, include magnetic surfaces and huge machinery in moments of vertigo-inducing spectacle. The gadgets improve on the arsenal of Ocarina and The Wind Waker, with the wind-making Gale Boomerang, the Double Clawshot and clever, combinable bombs, and the game keeps finding new and equally smart ways in which to use them. 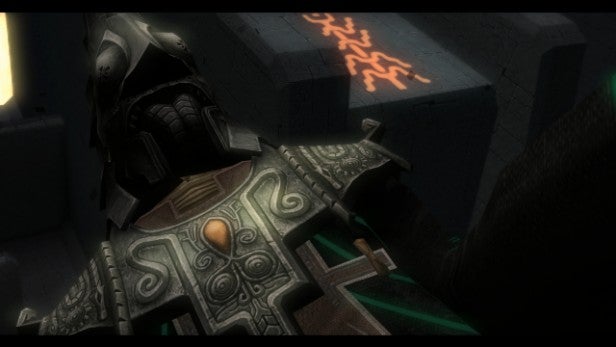 Meanwhile, the boss battles are up there with the series’ finest, pitting you against a range of vast, screen-filling monstrosities, each with some vulnerability you’ll work out and then exploit. Some suffer from wretched changes of camera angle and the limitations of the controls – I’m looking at you, Morpheel – but the best are challenging and puzzling yet still perfectly winnable, provided you pay attention.

Most of all, Twilight Princess has some of the series’ most intriguing characters and arguably its strongest story. It can be dark and slightly scary, but also cheerful, charming and bizarre. Characters that sometimes feel in danger of becoming boring become mysterious and interesting all over again. At its best, Twilight Princess recaptures the strange, melancholy mood of Majora’s Mask, and it’s all the stronger for it. 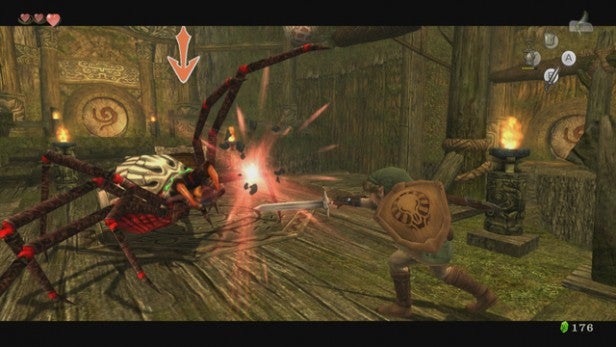 It’s a massive game, too. You can easily put in over twenty hours before you even make it to the halfway mark, and once you waste time exploring or in side quests the numbers only go up. There’s padding in there, no doubt, but it’s surprising how immersive and more-ish Twilight Princess can be over its extended running time. Even when it’s bad, the feeling is more frustration that you can’t skip to the good stuff than feeling inclined to give the whole thing up.

Non-graphical enhancements for Wii U are fairly minor. The gamepad screen comes in useful as a mini-map and touchscreen inventory, making it much easier to organise your items, drop them in the action slots and combine, say, bombs and arrows. There’s also a new side-quest collecting stamps from chests for bragging rights in the Wii U Verse. A few items or missions have been adjusted here and there, while bigger wallets makes collecting rupees a little less easier in the early game. Finally, an all-new Hero mode mirrors the dungeons, changes item placements and makes the game harder; all good news for those who complain that Twilight Princess is a bit too easy. 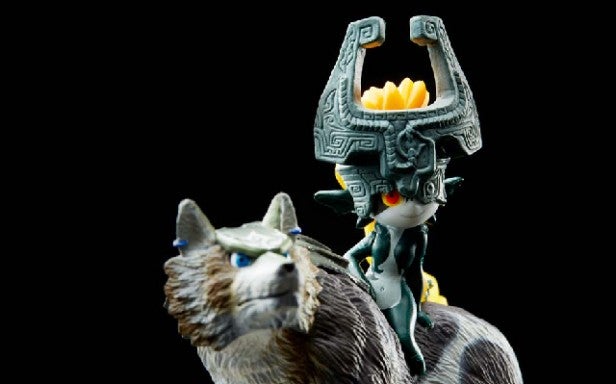 The biggest addition, however, is Amiibo support. Every Zelda-related figure has some impact when tapped on your pad, our old Link figure replenishing our arrows, while Princess Zelda and Sheik replenish hearts. The biggie, though, is the new Wolf Link Amiibo, included with the deluxe edition of the game. This apparently opens up a brand new dungeon – the Twilight Cave – though without a Wolf Amiibo to check this out with, we can’t say for sure right now. It’s a shame Nintendo has locked off new content for those prepared to cough up extra but, hey, at least that figurine looks good, right?

Verdict
Twilight Princess HD is an impress remaster of one of the most divisive Zeldas. As with The Wind Waker HD, genuine new stuff is relatively minor, but Nintendo has been smart enough to fix some of the original’s flaws. It’s still an odd, slightly inconsistent Zelda where not everything works perfectly, but it’s also huge, beautifully-designed, fascinating and immersive. By Zelda standards it falls short of being a masterpiece. By any other standards, it’s still an amazing game.

Have you been a long time fan of the series? Let us know in the comments below.