All the grumbles you’ve heard are true. Technically speaking, this is a Gamecube game with Wii knobs on. On occasion, it features low-poly models and spectacularly fuzzy, N64-era textures. It could have done with a spot of anti-aliasing. Swinging the sword using the remote is not as natural or as lifelike as you hoped it would be. At times, switching to the bow and trying to aim means spending a few seconds trying to get the remote to register properly with the sensor bar. The music sounds dated and synthesised, and could have done with full orchestral treatment. The save system is flawed. Link looks a bit of a nonce.


And none of it matters a single, solitary jot. 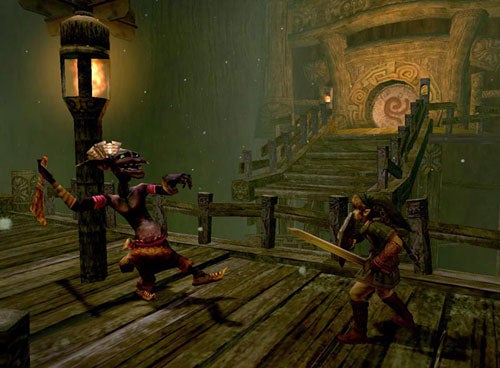 Frankly, if you come away from The Twilight Princess without feeling you have played one of the finest games of not just this year but any year, then you either a) have a pathological hatred of all things Zelda or b) seriously need to re-evaluate the way you look at games. True, it is probably the least revolutionary Zelda since Link to the Past. Yes, it does feel a bit like Ocarina of Time: Redux. But – and this is a very, very important but – it’s a masterpiece of games design, and a genuine gold-stamped, stick-it-in-the-hall-of-fame Nintendo classic. In the good old days before we all got our knickers in a twist about parallax occlusion mapping that used to mean something. Twilight Princess is the perfect reminder why. 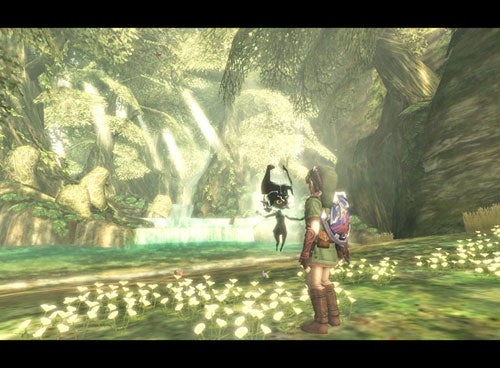 Let’s start with those much-debated graphics. Now, we all know that the Wii is no match for the Xbox 360 or PlayStation 3 when it comes to 3D horsepower: it hasn’t got the CPU grunt, and while we don’t really have much of a clue what the unit’s custom ATi chipset can do, we can be damn sure that it can’t compete with the Xenos lurking in the guts of Microsoft’s machine. Even the biggest Wii apologist will struggle to defend some of the visuals in Twilight Princess. Whisper it, but The Wind Waker was in many ways a more striking and beautiful game to look at, and there are moments – a forest corridor here, a dungeon chamber there – where the textures and modelling are so spectacularly awful that they might have been sucked straight from the Ocarina cartridge.

However, the more you play the game, the more these flaws disappear in the face of stunning, coherent and imaginative art. The lighting is frequently sublime; the character design is mostly wonderful; elements of The Wind Waker’s visual style have crept in and added a luminous note of cartoon wonder to the proceedings. There are scenes deep in the forest temple, or in the lava-filled depths of Death Mountain that are simply breathtaking, and there is epic architecture and waterfall-packed goodness here to match anything in Shadow of the Colossus. Last year, Kameo: Elements of Power gave us the nearest thing we’ve got to what a Zelda would have looked like on superior hardware, but for all its bump-mapped rocks and swaying grasses, it never got close to doing what Twilight Princess does here. This is a beautifully drawn fairy-tale world that you simply want to get lost in. 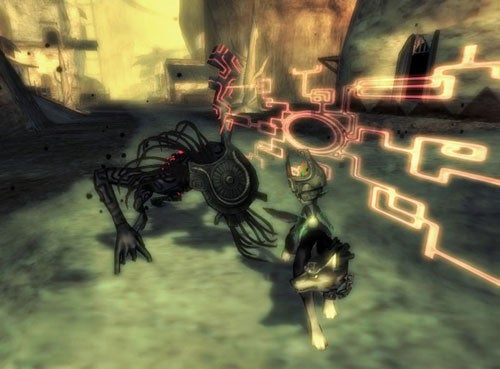 Now for the second tricky element – the controls. At first, I feared the worst. In the pre-release demo versions, I’d always found the fighting and aiming tacked-on and contrived, as if the Zelda team had been handed a remote and told to shoe-horn some Wii functionality in, or else. Within an hour of playing the full version, my fears had 90 per cent disappeared. Yes, it would have been nice if you could have thrust and swung with the remote and seen your movements replicated on the screen, but the general slashing mechanics work well, and there is a visceral feel to the fighting – particularly when you’re fighting on horseback – that wasn’t there before. Aiming slighshot, bow and boomerang is a little touch and go at times, but you can eliminate half of the problems simply by spending five minutes getting the placement of the Wii sensor bar right, and the rest falls into place fairly quickly. What’s more, some of the mini-games – particularly fishing and a spot of high-speed flying – make superb use of the remote. I was ready to hate, or at least only tolerate the controls, but to my surprise I’m growing rapidly to feel that this wouldn’t be as great a game without them. 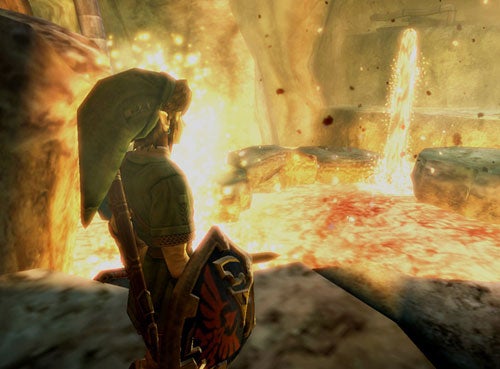 The music? Yes the sounds sound synthesised and plastic, but the themes are as stirring and majestic as always, and you can’t fault them in terms of always generating the right mood. The save system? Well, it’s annoying that you can’t save where you like in dungeons, but in actual fact there is a workaround (and anyone who has found Cooccoo will know exactly what it is). And Link? Well, he does look a bit of a big girl’s blouse from the front, but does it really spoil the game? Not on your nelly.

So, what makes Twilight Princess so special? Well, it’s partly a question of balance: balance between the old and new and balance between the big and small. On the one hand, it’s only building on the elements so well established in Link to the Past, Ocarina of Time and The Wind Waker. The structure couldn’t be more traditional Zelda – leave the village, become a hero, tackle three temples, then wait for the twist that tells you there’s more to come. Yet, on the other hand, the game never feels like a retread. For one thing, since Ocarina of Time the Zelda team has grown more adept at throwing in impressive action sequences to build momentum and keep things spicy, and here these are more cinematic and ambitious than ever before. There are fantastic battles with Link or horseback fighting against the odds, protecting loved ones, and slashing frantically left and right. There are scary bits where creeper creatures appear from nowhere. And of course, there are the boss battles – an area in which only Capcom seems in the same league when it comes to creature design and thrilling spectacle. 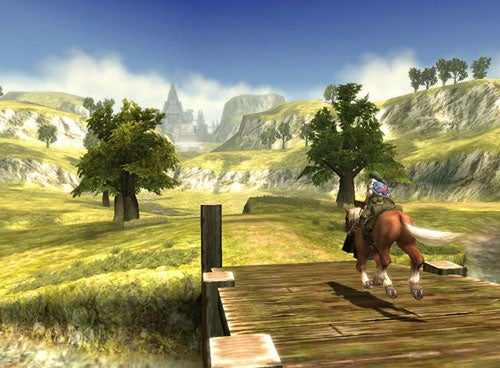 And the team has thrown in some new elements. The most obvious becomes apparent only a few hours in, as mysterious forces grab Link and when he awakens he has been transformed into a wolf. The change isn’t permanent, but it is recurrent, and results in some superb levels that go heavy on the platform-hopping and puzzle-solving. What’s more, the regular switch to a dark ‘Twilight’ world gives the game the dual world theme that’s at the heart of the best Zeldas.


Make no mistake – this is an enormous game, and one you could spend upwards of fifty hours playing. Even Hyrule itself has grown in scale since we last saw it. The grand open spaces are grander and more open, the towns and cities are larger and more populated. Amazingly, you get the same buzz you get seeing Zora’s domain in all its glory that you first got when you saw it in Ocarina of Time, for the reason that it has become more magnificent to match your 2006 expectations. Lake Hyrule, meanwhile, is a huge mass of water that practically begs you to dive in and explore. 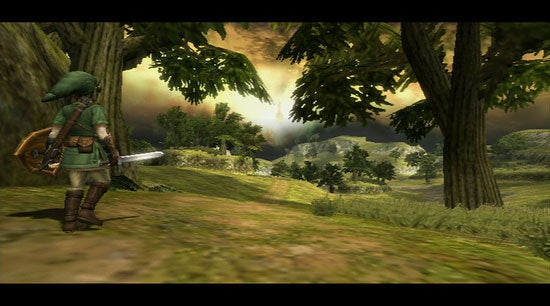 Yet, at the same time, Zelda hasn’t lost its intimacy. It still finds time for the smaller moments that bring the characters to life and make the story – while simple and often slightly cheesy – so engaging. The Twilight Princess team knows that we don’t play Zelda just to storm through the main story; we play it for the little stuff too. We want the silly collecting side-quests, the goat-herding, the fishing, the archery contests, and once again Hyrule is partly a playground in which your oddest whims are frequently rewarded. Twilight Princess is a dark tale – with the possible exception of the melancholy Majora’s Mask, the darkest Zelda yet – but that darkness is always balanced by a childlike sense of fun and a peculiar sense of humour. Simply put, it’s a real joy to play. 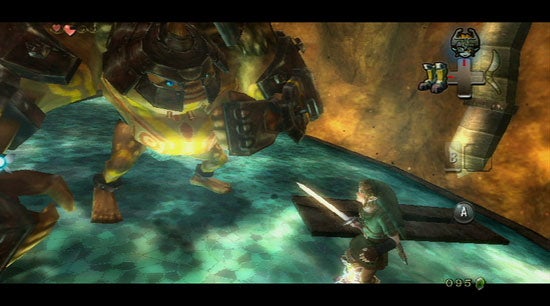 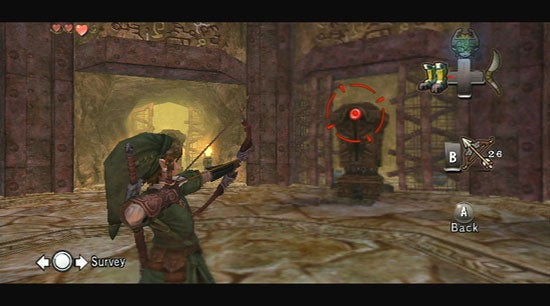 Of course, the real meat of the game remains the dungeons, and Twilight Princess’s temples sit square with the best of Ocarina of Time and The Wind Waker in providing both distinctive settings and compelling challenges that teach you new skills then ask you to employ them in increasingly imaginative ways. As ever, items are the key, and if you’re given the hero’s bow halfway through a dungeon, you can be pretty damn sure you’re going to need it from there on in. Yet Twilight Princess ingeniously asks you to combine items and abilities in ways that have you scratching your head one minute, then smiling when a solution clicks the next. On one level, little has changed since last time, but on a deeper level it’s different and even more satisfying. Comparing this to Ocarina of Time is a bit like comparing Half Life 2 to Half Life – sure the main gameplay elements are the same, but doesn’t it all feel bigger, more immersive and even more compelling? 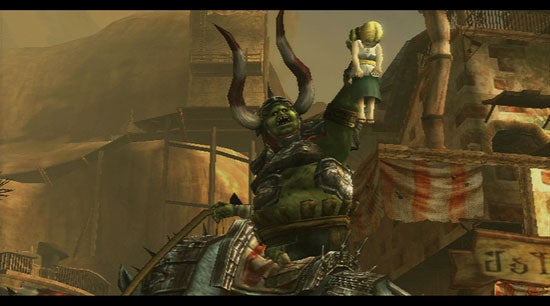 I could go on ad nauseum, but I won’t. This is a game full of ideas and moments that you should be allowed to discover for yourself. Most of all, it’s a game full of genuine magic and wonder. Some games you can almost reduce to a formula; the graphics are great, the sound is great, the combat is exciting, the levels are well-designed. Here, that whole approach seems just too reductive – there is something special at work here, and you’ll feel it from the very first few hours of play. The fact that you’ll still feel it nearly thirty hours later, with a vast chunk of the game still to go, says it all. The Twilight Princess may be a disappointment on some levels, but when the game as a whole is this majestic, it seems churlish and small-minded to give them credence. Just buy, play and enjoy.


Is it a flawless Wii showcase? No. Is it one of the best games ever? Without a shadow of a doubt. For all its cheesy sounds and ugly textures, Twilight Princess is a towering achievement.