Exclusive to Nintendo 3DS
The Legend of Zelda: Majora’s Mask 3D is arguably the most essential of the three Zelda remakes Nintendo has released on the 3DS and Wii U since 2011. Ocarina of Time 3D gave us the best ever version of one of the best games of all time, while The Wind Waker HD was a stunning update of a misunderstood classic, but Majora’s Mask gives the strangest, least familiar game in the series another chance to shine. Many people haven’t played it, and even if you did play fifteen years ago, you may be surprised. It’s both stranger and stronger than you might remember.

It’s all about context. Having spent four years developing Legend of Zelda: Ocarina of Time, Nintendo planned Majora’s Mask as a quick side project, designed partly to showcase the ill-fated Nintendo 64DD optical drive. It was developed in a year and to a budget, and while visually superior to Ocarina of Time – its detailed graphics made it one of the first games to require the N64 RAM expansion pack – it cleverly re-used or re-skinned characters and areas from its predecessor. What’s more, it was the first Zelda game to work explicitly as a sequel or side-story. The result? Too many people have sidelined it as a weird curio, and not a ‘proper’ Legend of Zelda. 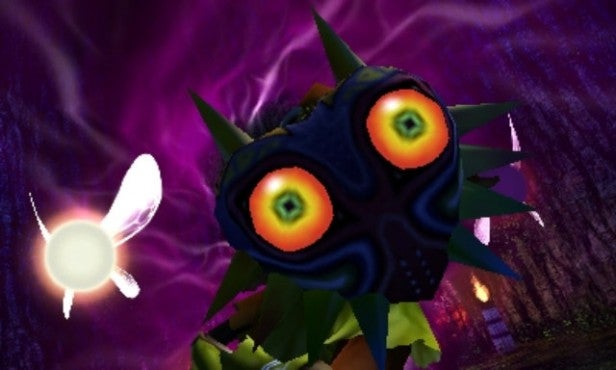 Freed from all the baggage, it’s clear how smart, innovative and ingenious Majora’s Mask is. It begins with the young Link, travelling the land of Hyryle after the events of Ocarina of Time. Wandering through the forest, Link is ambushed by a mischievous imp – Skullkid – wearing the sinister mask of the title. With Epona and his precious Ocarina stolen, Link follows the thief into a mysterious underground complex. There he fails to stop Skullkid and is transformed into one of the series’ puny, bubble-puffing, plant-like Deku Scrubs.

Using his newfound Deku powers, Link meets up with a strange mask seller, who promises to reverse the transformation provided Link can regain what was stolen from him, and recapture and return Majora’s Mask. What’s more, he has just three days to do it, or the mask seller will move on. This, it turns out, is the least of Link’s worries. The complex is a gateway to Termina, a kind of parallel Hyrule, and while the inhabitants seem oblivious, their world is in imminent danger of being destroyed by Skullkid’s efforts with a spectacularly creepy moon. Link has just three days to get the mask, save himself and save the world. 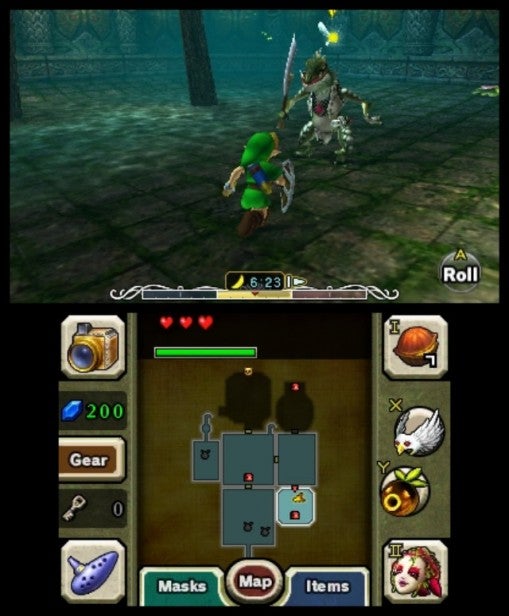 If it sounds impossible, it is, particularly as three hours of Termina time is roughly an hour of real-time. Yet here Majora’s Mask plays its trumpcard. Get past the opening section and regain your Ocarina, and Link earns the power to turn back time, so that he can continually relive the same three days. In effect, this is a fairy tale spin on Groundhog Day, but where Bill Murray needed to find himself, a community and, ultimately, love, Link needs to use the time available to complete as many tasks as possible before resetting the clock.

There’s a lot to get done. It turns out that stopping Skullkid involves visiting four ancient temples and freeing four ancient spirits, and that simply getting to the temples involves completing a lot of other tasks first. What’s more, the people of the central Termina Town have their own troubles, needs and desires, and helping them out – much like Bill Murray in Groundhog Day – is the only way to get your hands on essential kit. Throw in a mass of side-quests, challenges, contests and collectibles, and three days isn’t nearly enough, no matter how many times you can repeat them. 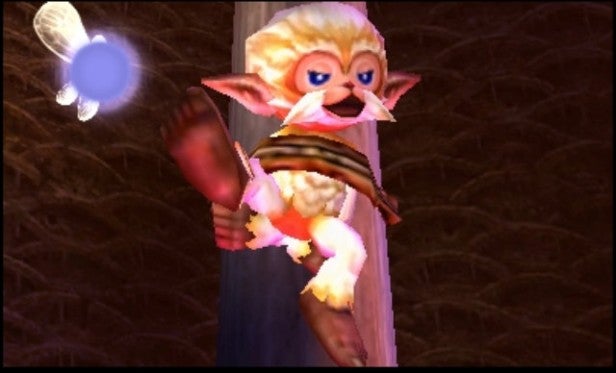 In lesser hands this would be a recipe for frustration, where you’re constantly struggling to get the right tasks done in the right order, but Nintendo has planned it all out brilliantly. While some objects disappear every time you put the clock back, others remain, and you can use these to create handy shortcuts. What’s more, the world is full of owl statues, which you can get an instant lift to once you’ve found and activated them. Songs, once learnt, aren’t forgotten, and so can be used to unlock new areas or shortcuts even once the three-day cycle has finished, and it’s also possible to bank the rupees in your wallet. Bank them on the final day and you can still withdraw them on the first – a practice that must wreak havoc with the bank’s accounts.

This structure gives Majora’s Mask a different feel from other Zelda games. It’s not that the usual visit new dungeon, discover new tool or weapon, use new tool or weapon to explore dungeon and slay boss stuff is abandoned, but it all now fits within a wider framework where you need to plan what you’re doing each day and make the most of the time available. In a way, the whole game is one grand puzzle: what can you do to further your aims within the confines of the next cycle? The in-game journal definitely comes in handy, enabling you to track the different tasks and characters, and work out what you’ve finished and what still needs work. 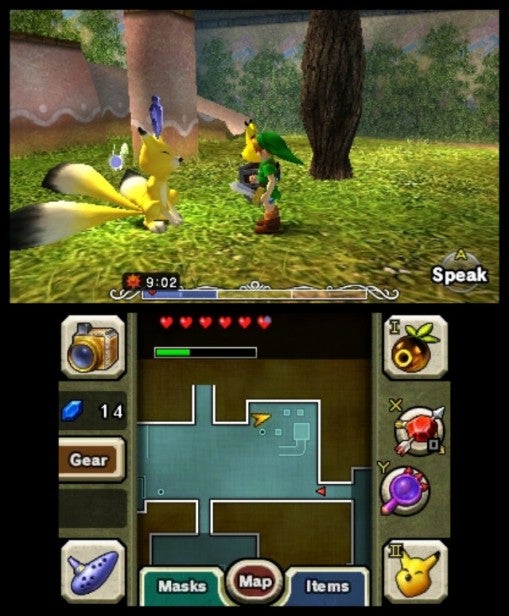 Masks, as you might expect, are critical. Once Link leaves his Deku form behind he can transform back into it at will, and the Deku mask is soon joined by a Goron mask, a Zora mask and a host of others. The key masks change Link’s form and give him new abilities, while the others give you a range of powers, ranging from gathering lost fairies to running faster, finding mushrooms, exploding and chatting with frogs.

Majora’s Mask isn’t an epic on the scale of Ocarina of Time, but in its own way more detailed and just as absorbing. You don’t have to tackle every challenge or complete every side-quest, but the game makes doing so rewarding and you can easily lose hours simply getting the small stuff done. And while talk of Majora’s Mask as the darkest of all Zeldas is a little overblown, there is something weird, crazed and oddly melancholic about it that permeates the story, the visuals and  even the music. The way the soundtrack changes over the final day does a fantastic job of ramping up the apocalyptic atmosphere. 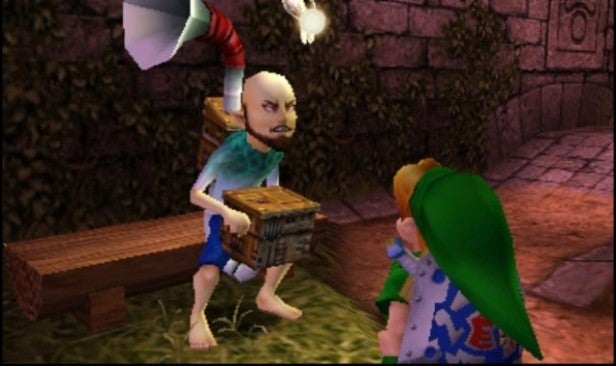 There aren’t many serious criticisms. Running out of time on a task on the third day can be annoying, but it doesn’t happen often. By making full use of shortcuts and your Ocarina tunes you can make sure it doesn’t happen at all. You’ll also find yourself stuck from time to time without much of a signpost, though this isn’t anything a quick visit to an FAQ can’t fix. There’s also Tingle, of course, but for some reason the Jar Jar Binks of Zelda doesn’t seem as hugely irritating now as he did back in 2000.

No, if we really, really had to grumble, we’d say that the dungeons – the Temples – are neither as numerous nor as inspired as their equivalents in Ocarina of Time. Even then, though, Snowhead Temple and The Great Bay Temple have some fantastic memorable moments, and the rest aren’t short of brilliant puzzles or demanding set-pieces.

This 3DS version alters the odd thing here and there, though it’s hard to remember enough to make direct comparisons. The difficulty curve seems a little smoother than we remember – particularly on certain boss fights. The main differences are, of course, visual. This is a more comprehensive update than Ocarina of Time 3D, with more detailed textures, better lighting and better models, not to mention excellent use of 3D. Playing on the new 3DS XL we had the 3D slider turned up most of the time, not simply because the new handheld handles 3D better, but because it genuinely makes Majora’s Mask 3D more immersive. 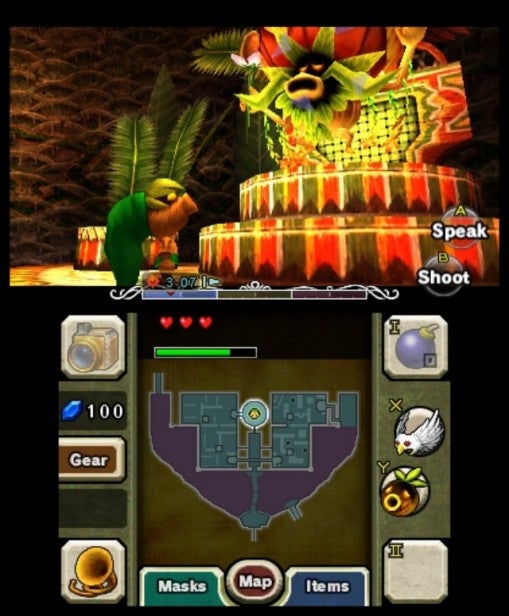 Nintendo has also done a nice job with the touchscreen, and managing your equipment and your masks and mapping them to the physical controls is a whole lot easier than it ever was on the N64. The more accessible map helps make sense of complex areas, and makes it easier to use your time effectively, rather than in unnecessary backtracking.

Fifteen-year-old games often feel like museum pieces, and the test is whether they still work well enough for you to ignore the limitations of the world or the game design and still have fun. The odd thing about Majora’s Mask 3D is that the usual rules don’t apply. Sure, its world can’t match the size or scope of modern open worlds, and it can’t compare to a Dragon Age or Skyrim when it comes to complex sub-plots, busy cities or background lore. Yet it still has so much unique personality and so much to experience. It’s incredibly absorbing even now.

Verdict
With its latest remake, Nintendo hasn’t just exhumed a golden great, but given us a new opportunity to recognise just how golden and great it always was. With superb, mask-swapping, time-twisting gameplay, great use of 3D, a compelling story and its own weird atmosphere, Majora’s Mask 3D is another must-have for your 3DS.