Constants and variables – a high-brow theme of Bioshock Infinite, but one that’s just as appropriate for The Legend of Zelda: A Link Between Worlds. In the land of Hyrule there’s always a princess, always a boyish hero, always dungeons to explore, gadgets to explore them with and always an overworld, full of monsters, magic and surprises, linking the whole shebang together.

In this, the latest Zelda is no different from any other. But then those variables come into play. On one level, like the New Super Mario Bros. games, A Link Between Worlds uses 3D graphics and recent technology to return to the 2D roots of a series. On another, it’s surprisingly innovative, taking risks with the established Zelda structure and finding out what happens when you do. Put it all together and you have one of the strongest games on the 3DS, or on any other handheld platform you could mention. 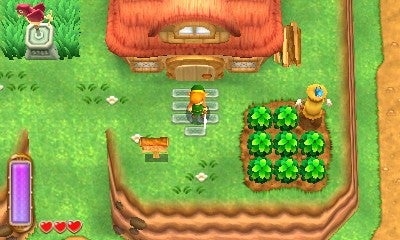 A Link Between Worlds has one specific vintage Zelda in its sights, and that’s the 1992 SNES classic A Link to the Past. It has the same top-down view, a broadly similar game world and is explicitly set up as a successor, though the hero, Link, and the princess, Zelda, are – as usual – not exactly the same people they were before.

It’s also styled in much the same way, with similar scenery, architecture and monsters, and a look that’s effectively what A Link to the Past might have resembled if it was being rendered in 3D on reasonably modern hardware. The aesthetic doesn’t have the charm and grace of the cartoon visuals of the Wind Waker HD, as used in The Phantom Hourglass and Spirit Tracks on the old DS, and we can’t really say that we’re fond of Link’s latest look. Yet this style turns out to have some major plus points, which we’ll come to later.

The tale begins in the way so many Zeldas start; with an urgent summons and a critical event that drags Link into contact with an evil power: this time an art-obsessed sorcerer named Yuga. Yuga is busy transforming the Sages that defend Hyrule into feeble paintings, and is only too happy to do the same for Link should he get in the way. Luckily, his plan backfires, giving Link the ability to transform at will into a 2D drawing that can wander along walls and past 3D obstacles. Armed with this power and every tool at his disposal, Link must find three magic pendants and then claim the ultimate weapon – the Master Sword. 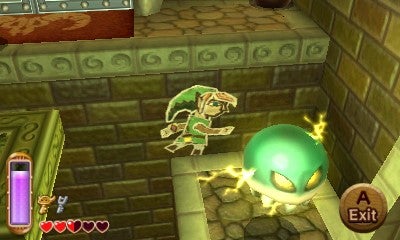 So far, so standard Zelda, albeit with a unique twist. Yet right from the start A Link Between Worlds starts to mix things up. Most Zelda games have a strict structure, where you journey through Hyrule to a dungeon, find a new piece of equipment, use the new kit to reach and then defeat the dungeon boss, and then use it to explore new areas and reach the next dungeon. Not so A Link Between Worlds. Now nearly all the equipment you need is available at the start, and you just need to rent or buy it from a mysterious bunny-eared merchant.

This has two effects. First, you need to keep bringing in the wonga if you want to get the gear you need. In fact, dying means you lose rented equipment, forcing you to return to your home and cough up more of your precious dosh. Zelda’s Rupees have never seemed so valuable or so much worth collecting.

Secondly, you have a lot more freedom in how you explore the dungeons. In the game’s first section you can opt to tackle dungeons two and three in either order. Once the action really kicks off you have even more dungeons in need of attention, and while you’re subtly encouraged to deal with some before others, it all really comes down to what you can afford, and whether you’re willing to rent or buy it. 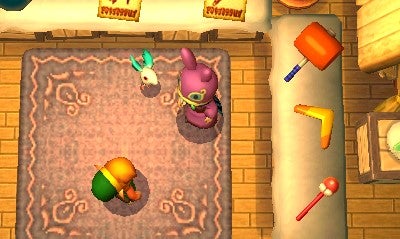 It’s at this point that A Link Between Worlds throws in its second big mechanic. The first few hours have their share of tricky dungeons, asking you to make full use of two great gadgets – the Link lifting Tornado Rod and the always handy Hammer – not to mention Link’s new 2D form. Get beyond this, however, and the game opens up a whole new world, Lorule: a dark mirror image of Hyrule where a different princess, Hilda, is only just holding out against the forces of evil. Link can move between the two worlds by transforming into 2D form then creeping through psychedelic cracks in the walls, and the puzzles become as much about exploiting the constants and variables between the two worlds as using new equipment, solving puzzles and defeating all the monsters.

Together, this handful of new ideas freshens up the Zelda gameplay, even as the presentation is raising nostalgic memories of Zeldas past. One of A Link Between Worlds’ key strengths is that it doesn’t tell you where to go or what to do, but leaves the situations lying within its two landscapes and giving (or at least renting) you the tools to do the job. There are hint and help systems built-in, like a handy fortune-teller, some helpful specs and a broomstick-based fast-travel system, but it’s great to see a game that makes you work out what you should do, even if it’s going to drag a few players towards the inevitable FAQs. 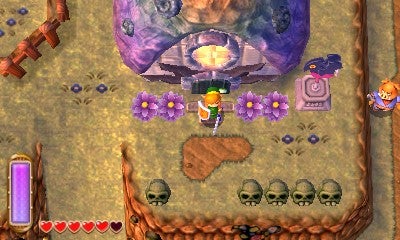 The best Zelda games are all-absorbing, dragging you from dungeon to dungeon with a mixture of sheer charm and the thrill of discovery. This is unquestionably one of the good ones. Along the way you’ll find the usual side-quests and eccentric characters plus some enjoyable mini-games, while collecting a range of gruesome ingredients for life-saving, damage-dealing potions. For a game with a reasonably small game world and a limited cast, there’s an awful lot of stuff here to get lost in.

That matters. A Link Between Worlds is on balance the best Zelda we’ve yet seen on a handheld, and one that can keep you sucked in for hours on end. It kept your writer going for two lengthy train journeys within hours of each other, where the time flew by like it was nothing. And while we usually poo-poo the 3DS’s 3D capabilities, they also count here.

The world and the dungeons are rendered with a palpable impression of depth that actually makes them easier to navigate with the 3D effect switched on, and that’s helped by the clean style of the graphics. There aren’t many 3DS games where the 3D actively encourages immersion, but here it does, adding a vertiginous edge to some of the environments, and making some of the boss battles genuinely spectacular. 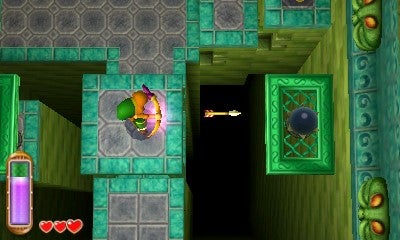 The downside of some of the changes is that it can be frustrating. The help systems are unobtrusive and do nothing to break the magic of the world, but we can guarantee you’ll get stuck somewhere along the way, particularly once you have to switch from Hyrule to Lorule and back again. The routine of having to return home to re-rent equipment every time you die can spoil the flow, though being able to buy equipment later takes most of the pain away. And while we’re grumbling, the new systems for managing inventory and choosing items isn’t bad, but you can only use one piece of equipment at a time, and switching quickly from, say, the bombs to the typhoon rod is a pain.

Well, more of a niggling ache, really. A Link Between Worlds is sometimes a little too easy, and sometimes a little too tough, but it’s always utterly beguiling. It says something that with a new generation of super consoles just around the corner, some small part of us would rather find a desert island (with a plentiful supply of power) and settle down to make the very most of this pocket-sized marvel.

A Link Between Worlds has one foot embedded in the series’ past and one foot firmly in its future, and the result is another classic Legend of Zelda. It doesn’t have the visual flair of The Wind Waker and its DS progeny, but it makes up for it with fresher gameplay, some brilliant new ideas and a more freewheeling style of epic adventure.  Handheld games don’t get any better.

Next, read our Nintendo 2DS vs 3DS vs 3DS XL comparison