As regular readers might have gleaned from my review of Iron Man last month, I don’t exactly have high expectations of game adaptations of superhero blockbusters. With very few exceptions, they’re dismal, uninspired and unimaginative affairs, seemingly designed to plunder the wallets of those who loved the movie (or the wallets of their parents, come to that). With The Incredible Hulk, however, there’s really no excuse. All Edge of Reality and Sega had to do was follow the template laid down by Radical Entertainment two years ago with Incredible Hulk: Ultimate Destruction, give it a polish, fill in a few cracks, and make it vaguely relevant to the plot of the film. Job done. 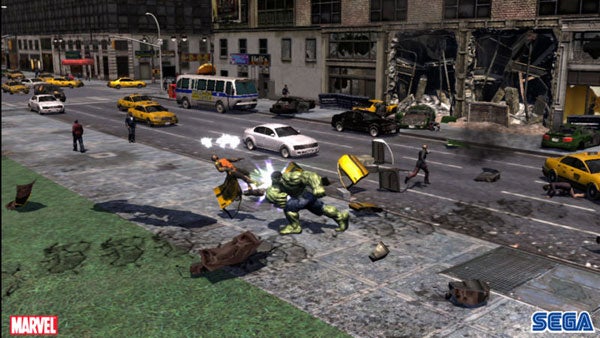 Shockingly, that’s more or less exactly what they have done. The Incredible Hulk follows Ultimate Destruction in abandoning linear levels for an open world structure, here – as in the game of Spider-Man 3 – the island of Manhattan. I’ve yet to see the movie, so I can’t tell you how closely the game mirrors the plot, but as far as I know the game takes one strand – Bruce Banner’s pursuit by the army and its creation of a rival ‘abomination’ – and adds a number of additional strands based on the activities of a mysterious group known as The Enclave and the activities of a selection of super villains.


Missions that further these plotlines are dotted around Manhattan for the Hulk to select as he pleases, and completing one mission will open up others in one or more of the plotlines. Along the way, you get a selection of mini-games to try your hand at, not to mention a wealth of bonuses and collectibles, from items that boost your health and your fury guage (used to perform health recharges and devastating special moves) to comic book covers, souvenir buildings and alternative versions of The Hulk to play. 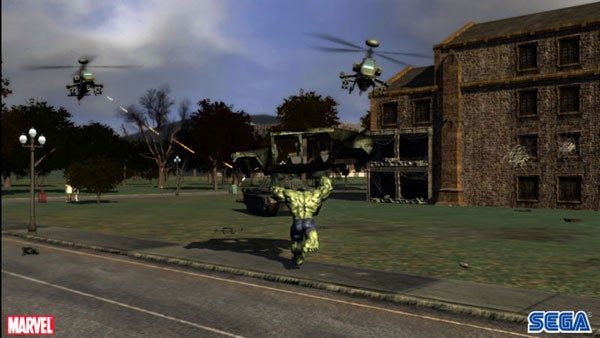 This is a better open world than we’ve seen in recent efforts like Spider-Man 3 and Iron Man; more densely populated, with a bigger variety of population and traffic and more sense of the world adapting to your actions. Nearly everything you see can be wrecked if you put in a little effort, and throwing taxis, lamp posts, buses, humvees, soldiers, armoured hulk busters and weird mutant creatures into the scenery is probably the single greatest pleasure of the game. Whole buildings can be taken down if you give them enough punishment, and you’ll even get the aforementioned souvenirs if you can batter down a New York landmark. It’s the sort of behaviour that has made The Hulk a popular figure with grumpy toddlers from two to eighty; feel free to shout “Hulk Smash!” as you go!

Of course, the downside of all that joyous smashing is that those puny humans in the smart green uniforms are guaranteed to intervene, and the more destructive you are, the more they’ll get in the way. Luckily, Hulk has a decent repertoire of moves to hit them with, from the classic punch to the grab and hurl to picking up a car or lamp post and bashing them with it. At first it seems like the combat system is weak in comparison to Ultimate Destruction, but in fact you can still mash cars into steel gauntlets or turn taxis and chunks of buildings into shields; you just need to wait until the game unlocks the moves necessary first. 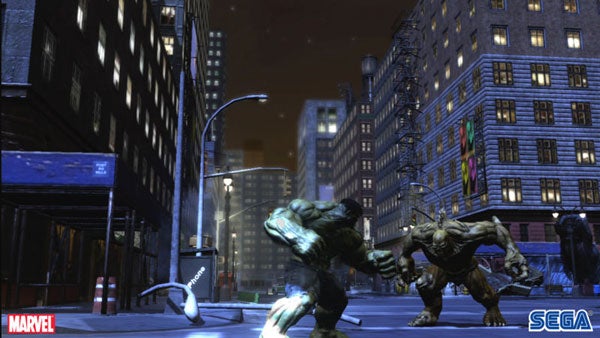 There’s a similar issue with movement. Initially, the less-than-jolly green giant feels a bit slow and tied to the ground after Ultimate Destruction’s Hulk, who raced up the side of skyscrapers and leapt several tall buildings in a single bound. However, a few speed upgrades soon cure the first problem, while getting used to the charged jump and high-speed bouncing moves will sort the second. And while I can’t help but miss the wall-running antics that made getting from A to B such a joy in Ultimate Destruction, you can still scale buildings at speed through the power of the Hulks mighty arms. 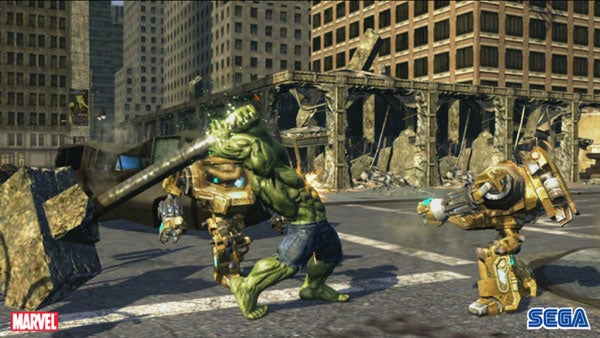 All of this is good, but it’s the dozens of small niggles that bring The Incredible Hulk down from the level of that earlier Hulk game. In nearly every important respect, this is a game that nearly, but never quite, delivers. Take the graphics engine, for example. At street level, most of the time, you get exactly the sort of visual richness you’d expect from an HD era game, with a detailed, nicely rendered Hulk, some solid-looking buildings, decent lighting and a sizable collection of cars, pedestrians and hostile troops or vehicles sharing the screen. Head up to the skyscrapers, however, and instead of the huge draw distances we expect after Assasin’s Creed or Crackdown, you get dull rooftops with obvious texture tiling and an awful lot of fogging to keep speeds reasonable. And when the action hots up, the frame rate slows down, going from occasional jerks to full on fits of stuttering when there are too many foes in the immediate vicinity, or when the missiles start raining down. I’ve even heard talk of complete freeze-ups, though luckily I’ve yet to have one of these happen to me.

Meanwhile mission design and pacing is a big disappointment. Too many fit the classic escort this guy/defeat these baddies/dispose of these bombs formulas, and most mean doing the same basic task several times until the game decides you’ve done enough. There’s little of the strategy we saw in Ultimate Destruction, and the combat just isn’t as varied or exciting. There’s no sense that you’re building your abilities and combos to match the growing powers of your enemies, and when upgrades are dished out, they seem to be served up without much rhyme or reason. Even the mini-games don’t have the wit we saw from Radical’s effort. Smashing 25 cars or battering so many soldiers in a minute is fun, but where is the equivalent of the car kicking, fire rescue or mini-golf challenges? The Incredible Hulk can do mindless destruction, no problem, but the earlier game still holds onto the ‘Ultimate Destruction’ tag. 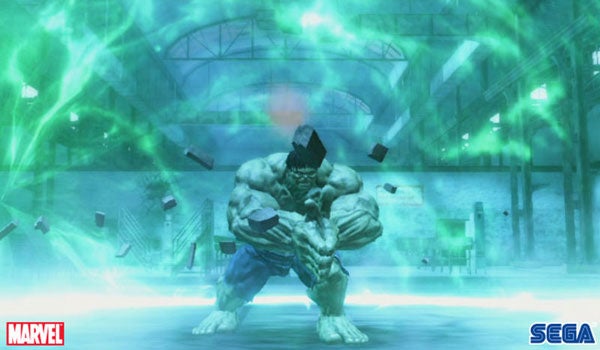 But this game’s biggest bugbear is repetition. It doesn’t help that where Ultimate Destruction had two different environments – the badlands and the city – to work your way through, The Incredible Hulk has just one. Nor does it help that so many missions seem to take place in the same small districts. Put this together with The Incredible Hulk’s heavier combat focus and you have a game where what you’re doing in hour five or six isn’t that different from what you were doing in hour two, and bar the odd spike the difficulty won’t really have increased. By this point it’s all beginning to get a bit tired. Also, for much of the time there simply aren’t enough missions available. There’s always somewhere to go and something to wreck, but wouldn’t it be nice to have a map that was buzzing with opportunity? 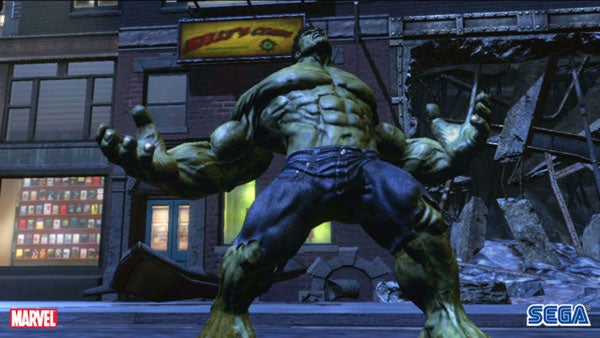 Does this make The Incredible Hulk a bad game? No. It’s better than Iron Man for instance. Nor would it be fair to criticise it too harshly just because it fails to live up to one of the best superhero games ever made. All the same, it’s not a game I would recommend shelling out £30 to £40 on, just because I think you could easily see the best of it within a couple of afternoons of play. There’s some good, simple fun in all that dumb destruction, but very little else going on beneath the surface, and The Incredible Hulk badly misses the exuberance and playfulness that made Ultimate Destruction such a great experience. The result is a half-decent movie adaptation, but a pale green shadow of the superior Hulk game.