It hasn’t been the most auspicious year for Microsoft’s Kinect. After a blockbuster launch with a handful of genuinely brilliant titles – Kinect Sports, Kinectimals, Dance Central – we’ve settled into the familiar pattern of novelty games and botched bonus modes for bigger releases seen before on the Wii.

Only Ubisoft’s Child of Eden proved exceptional, even if the art-gaming crowd went a little over the top. With The Gunstringer, however, there’s some hope that the tide might turn. Unique, innovative, fun and quirky, it’s exactly what you want from a Kinect game – one that works with, rather than against, the limitations of the system. 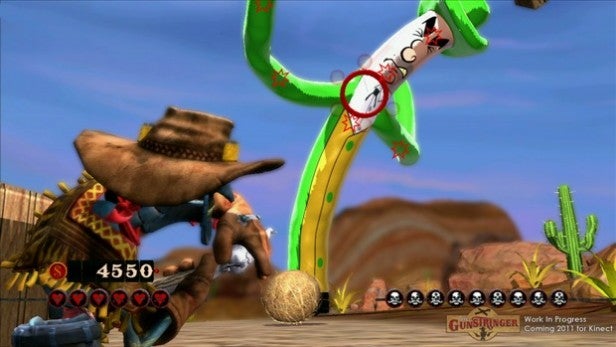 It’s a disarmingly slight affair, dished out at a budget price, and presented as a freakish puppet show being performed in front of a live studio audience. The Gunstringer is a warped Western with a cast of marionettes, featuring a string-puppet skeletal killer on a quest for revenge against his old gang of outlaws – a sort of Red Dead Redemption meets Muffin the Mule.

This conceit works into how you play the game. With the left hand, you hold the puppet’s strings. The game controls the forward (or backwards) movement and the view, but you can use the strings to pull the puppet left and right, jerk him upwards to vault a wall or gap, or tug him in and out of cover. The right hand controls your gunsight. Move it over a target and it locks on. Jerk your hand upwards, like you’re a five-year-old playing cowboys, and you let loose a volley of bullets. Standing with your legs wide apart and blowing over your pointy finger is both entirely optional (and not actually supported by the software) but we think it makes you look extra-cool. 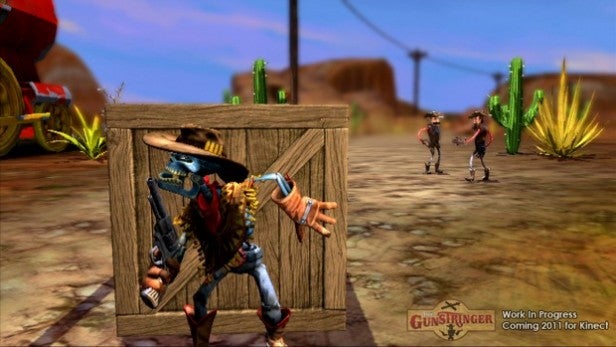 To be honest, that’s 90% of the game covered right there. But it’s kept fresh with constant differentiation – as each level moves from shoot-outs to fast-paced sequences on a wooden horse, to dodge the obstacles sections and twin-pistol blasting extravaganzas.

Sometimes you’ll reach an odd sequence of 2D platforming where you’re leaping over gaps and jumping spikes. Sometimes you’ll be placed behind some cover and given a new weapon – a shotgun or a flamethrower – to contend with. You might even find yourself mounted on a firework, or engaging in fisticuffs with mutants in a swamp. It doesn’t matter.

The Gunstringer isn’t about clever score-attack mechanics and it doesn’t really do hidden depths. It’s not arty like Child of Eden, and it doesn’t have an agenda to set or a genre to transform. It’s simple entertainment, built for cheap, dumb laughs, wet Sunday afternoons and Friday nights when you get back from the pub. Taken on these terms, it’s a fantastic Kinect game.

The controls still reveal the limits of the hardware. Don’t expect pin-point-accurate targetting and shooting, jumps have to be made a fraction of a second in advance, and the movement controlled by the left hand is prone to fits of unpredictable sensitivity. The game has clearly been designed to accommodate all these things, and for the most part it works. If you want to play Time Crisis, there’s a perfectly good version on PS3 with Move. This is not that kind of game. 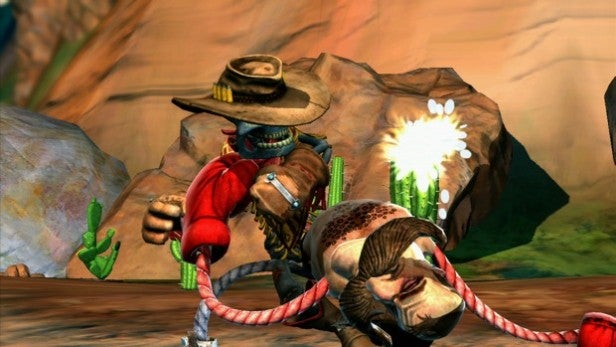 The graphics, meanwhile, are best described as stylish rather than impressive. Apparently, The Gunstringer and some of the other characters began as real puppets, and the game revels in the kind of bizarre hand-crafted characters and scenery we’ve seen before in LittleBigPlanet; you’ll even see human hands placing objects and items on the horizon as you go, while one special attack actually involves a pounding fist.

With scenes that take you through frontier towns, backwoods logging camps and bawdy river-boats – even weird pseudo-Oriental forts – there’s plenty of variety, and it’s all backed by a soundtrack that riffs on the classic Ennio Morricone Western themes to great effect. It even pinches Bastion’s interactive narration trick, though here it’s used more repetitively and sparingly, and mostly for silly comic effect. 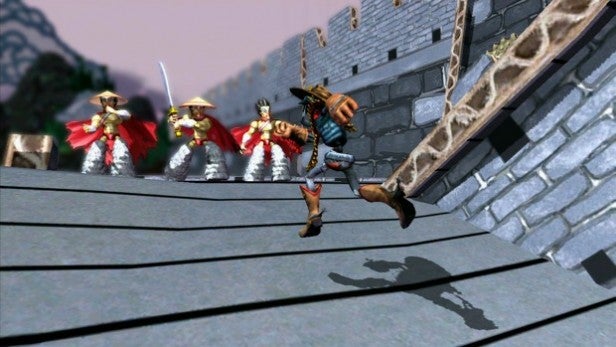 If the game falls down, it’s in the fact that it is undeniably light fare, and that there’s not an awful lot of reason for a lone gun to keep coming back for more. Online leaderboards and bronze, silver and gold rankings might encourage a few, but The Gunstringer hasn’t got the taut gameplay of a classic score attack game.

Cash earned through the killing can be splashed out on a bonus hardcore mode or new graphical effects, but these aren’t particularly convincing. What we suspect is that this will be the kind of game that comes out with family or company. Given the price – and the fact that its bundled with a free download code for Fruit Ninja Kinect – that’s absolutely fine.

Verdict
The Gunstringer might be slight and simple – and it won’t convince the Kinect-hating hardcore – but it’s a lovable chunk of rootin’, tootin’, shootin’ fun.