Maybe we shouldn’t be too disappointed. When EA bought the rights to The Godfather it was shooting for the moon, and when you aim that high you either succeed brilliantly, or fall down to the ground in flames. Still, when you adapt the latest Bond movie or super-hero blockbuster, nobody expects more than a by-the-numbers action game. When you take one of the greatest movies ever made and try to turn it into a game, you’re in for a more difficult ride. You’ve either got to make something special, or face the question “Why did you bother?”


It certainly doesn’t help when the movie’s auteur, Frances Ford Coppola, publicly disowns the result. “I went and I took a look at what it was” he told an American TV interviewer, “What they do is they use the characters everyone knows and they hire those actors to be there and only to introduce very minor characters. And then for the next hour they shoot and kill each other. I had absolutely nothing to do with the game and I disapprove.” 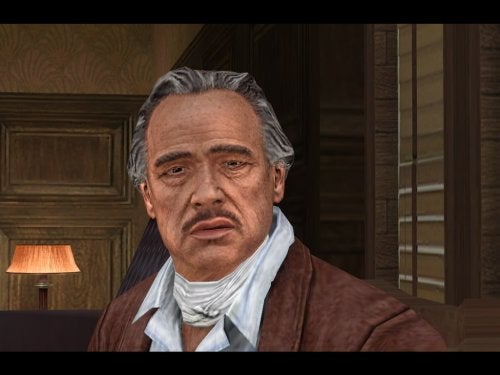 Well, he might not have made a decent film in more than a decade, but the man has a point. For all of EA’s talk of “respecting the fiction”, The Godfather is little more than a take on GTA, restaged in 1940s New York, and with an awful lot of shooting and killing to be done. As a smalltime associate of the Corleone family, it’s up to you to do their dirty work – removing the odd stone from the Don’s shoe, if you get my meaning – while extorting businesses, taking over rackets and hitting the odd freight truck. When you’re not building up your own empire on the side, you’re helping the family with its problems, effectively by playing a behind-the-scenes role in the events of the classic movie. 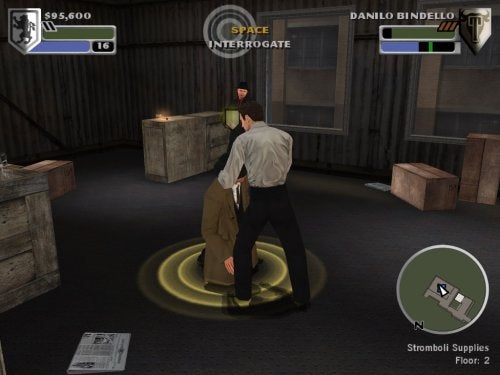 Now, don’t get me wrong: EA’s team has clearly made great efforts to utilize the available assets, whether dragging in Messrs Caan, Duvall and Brando for additional dialogue or bringing in the chilling Nino Rota score at every opportunity. What’s more, the main story missions are closely tied in to the film’s narrative. When armed goons come to kill the Don in hospital, you’re there to help Michael hold them off; when Sonny’s taken down at the tollbooth, you’re hot on the trail of the assassins; and when a certain portion of the equine anatomy needs to be delivered to a movie producer’s bedroom, hey, you’re there to do the honours. As the theme rises in the background and you hear the original cast delivering solid Godfather dialogue, it might be tempting to see The Godfather as a game that bends over backwards to pay its respects.

But look closer and you can see it’s only paying lip service. Take a moment to remember The Godfather. It is a violent film, but is it an action film? No. People die, and in shocking, bloody ways, but it’s not a body-count movie, nor does it ever leave you feeling life is cheap. Not so the game. For the most part, another mission means another shooting gallery; another club or warehouses full of faceless, gun-toting stooges either cowering behind doors or running manically from one room to another, seemingly for no other reason than to give you a chance to blast them. The environments are dull, the AI is useless. You’ve seen it all before, and done much better than here. 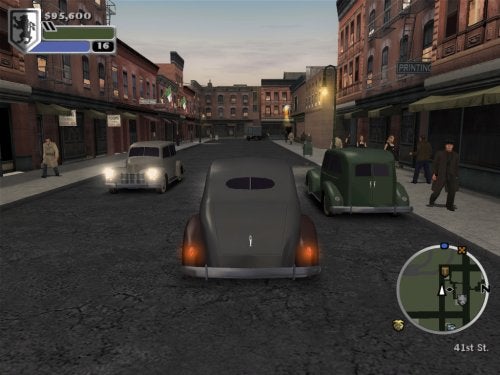 Otherwise, you’ll find yourself driving from one part of the city to another, often with a time limit, and frequently with enemies in tow. Given the fact that a) the car handling is twitchy and unresponsive and b) the New York City map is fiendishly (if accurately) hard to navigate, these portions of the game are about as satisfactory as a special edition of The Godfather Part III with an hour’s extra footage of Vincent/Mary love scenes. Yep, that bad…


Even when the gameplay grows more imaginative – sneaking the horse’s head into bed or offing a corrupt police chief – the execution seems woeful and unimaginative. Just do the right things in roughly the right order and you’re through. Some missions even suffer from horrifyingly pernickety conditions. At one point, you have to whack a rival don in a funeral home. Easy, you might think, but not when the game insists that you first murder his bodyguards then throw him in a waiting furnace. The result is a ridiculous situation where he can shoot you while you’re dragging him into position, but you can’t do more than wound him or you fail. I mean, does it really matter whether he hits the flames dead or alive? 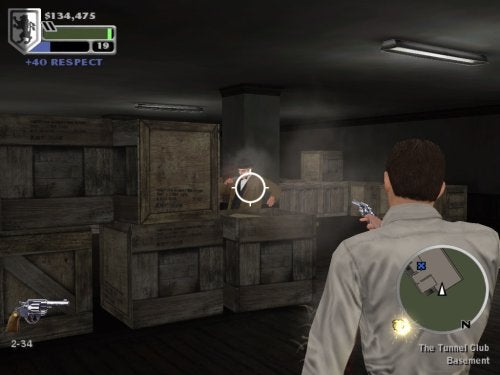 To be fair, not everything is a disaster. For one thing, the game avoids GTA’s habit of forcing you to repeat the same whole mission umpteen times until you get it right by breaking them down into sensible, checkpointed sections. For another, the combat system is in some respects the best seen in a GTA clone. Up close, you can lock onto targets, pummel them with your fists, grab them and thrown them about, and hang them over a window ledge in a vaguely threatening manner – in other words, the sort of negotiation skills that get results. When the guns come out, the game adopts a similar targeting system to the one used in EA’s last Bond opus, From Russia with Love, with an auto-target plus a manual precision aim for when you want to kneecap your target, not shoot them in the guts.

Well, the system works, but like everything in the game it’s not quite polished enough. There’s an annoying delay when switching from one weapon to another – or holstering and unholstering – that has caused my death on more than one occasion. Worse, the target switching seems horribly clumsy, particularly on the PC where it proves almost impossible to move quickly from one to the next. As a result, you tend to rely on mouse aiming in most situations, which has benefits (easier precision aiming) but also pitfalls (it’s harder to shoot from cover). 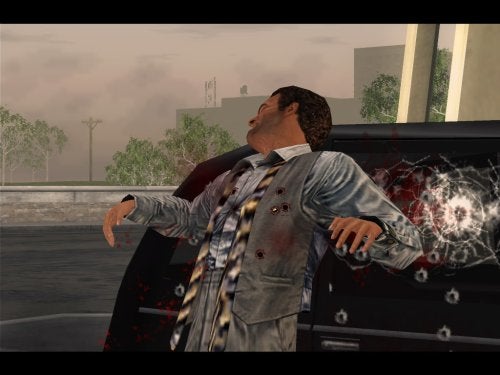 Perhaps the game is at its most entertaining when it stops treating you like a gopher, and gives you the chance to make a reputation of your own. Intimidating the owners of shops, hotels and bars gets you a regular income, and can also open up downstairs rackets that you can add to your criminal portfolio. The first couple of times you smack a mouthy manager around are fun – you need to be menacing, but not too menacing lest you back them into a corner or, worse, give the dialogue a permanent conclusion. However, as time goes on you’ll soon notice how empty and repetitive the experience is, and how little you seem to get out of it in terms of real rewards or satisfaction. Once the main story missions run out – all too soon – and the empire building aspect takes up the focus, there’s a danger you’ll stop long before you’re the Capo di Tutti Capi. 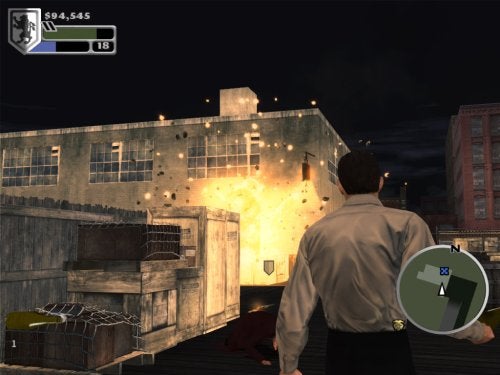 Overall, The Godfather fails on three levels. Firstly, the concepts just aren’t good enough. The game neither encourages the ‘toybox’ mentality of GTA: Vice City, nor matches the gravitas of its cinematic inspiration. Secondly, the execution falters. There are too many flaws, and too many areas where you’re left thinking “surely they could have done better than this.” Sadly, that thought extends to the graphics. The PS2 version looks OK, but with its angular models and rough textures it’s hardly cutting-edge stuff. The crime is that the PC version doesn’t look all that much better. The texture resolutions have been improved, and some flashy particle effects have been sprinkled on top, but the characters, clothes, and buildings have a slightly dated Direct X 7 look about them. As PC users also have to suffer sudden block-in of objects, occasional lapses in the frame rate and some weird moments when cars appear several seconds after their shadows, you really have to wonder what went wrong.

But the worst failure of all is that The Godfather never captures anything of the spirit of the films. For all the blood and vengeance, The Godfather is a film deeply informed by moral values. It’s all about respect, honour, family, trust and tradition – the things men will do to protect their families, and how those things can prove destructive. The game is different: it actively encourages an amoral attitude to life and property, and is too busy throwing out gun battles and car chases to work towards anything deeper. Its attempts to engage your emotions consistently fail, partly because its handling of relationship is so perfunctory that, when a loved one dies, all you see is another corpse on the floor. And while the absence of Al Pacino from the cast hardly helps (the role now taken by a charisma-free unknown), there’s no sense of Michael’s desire to escape the family business or his grudging acceptance that he can’t. Instead, he just seems like Sonny with a few more smarts. 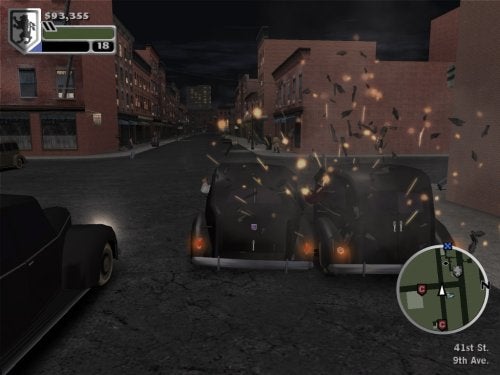 The Godfather isn’t a bad game – just a mediocre one – but this is a dark day for anyone who wants to see games on the same level as cinema or literature. It’s not so much that EA tried and failed to tackle the themes of a great movie, but that it seemed happy to settle for some easy gangster thrills that might satisfy the kids, and couldn’t even do that with sufficient class. What could have been a classy mafia epic becomes hour after hour of vaguely competent driving, shooting and killing, and in the end that’s all you’ll take away.


On one level, this is nothing more or less than a so-so GTA clone with a few smart game mechanics but less imagination. But then you remember that it’s meant to be The Godfather, and the whole thing seems like a criminal waste. Those EA wiseguys should’a had more respect. 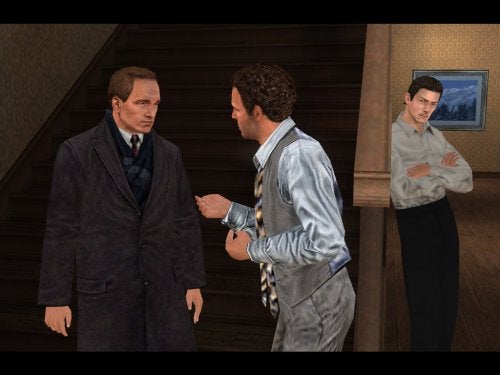