If you’re a fan of games like Don’t Starve or State of Decay, you’re going to want to know more about The Flame in the Flood. This game comes from a new developer called The Molasses Flood and I think it could be one of the standout games from ID@Xbox.

The Molasses Flood itself is a studio made up of ex-AAA studio developers, including members from Irrational, Harmonix and Bungie. Immediately the talent behind this Kickstarter title is clear.

The interesting gameplay mechanics and fantastic score could make this game, but it’s the art style that will really set it apart.

The Flame in the Flood is a story about a young girl’s survival as she makes her way down the river. But what’s different about this girl’s story is that she’s not actually alone. Our heroine Scout is accompanied by a loyal dog called Aesop.

That’s about as far as the story goes in the preview we’ve seen, but the real focus is on making your journey. Everything in this game is procedurally created, so you’ll find that each of these journeys is different.

The two must travel down the river, trying to pick up useful items and find shelters that will help them survive. Unlike Don’t Starve, the aim of The Flame in the Flood is to keep moving down the river, rather than making yourself a solid base.

At the very beginning all you have is Aesop, your bags and a raft, which you’ll use to traverse the river rapids and find new locations. Each area will offer you different items to help you along, some found in chests or out in the open, such as flowers or wood. 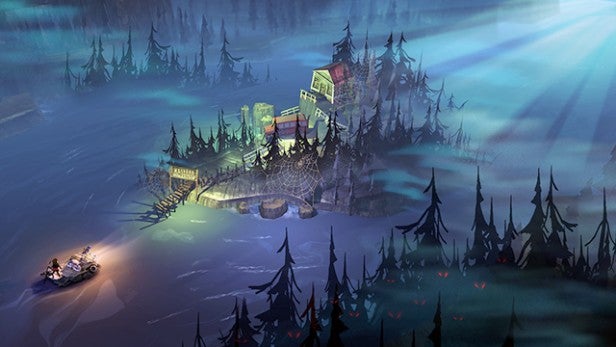 You’ll want to keep important items in Scout’s rucksack, which is expandable, but there’s also the option to store some items in Aesop’s backpack. What’s an interesting idea is that anything stored in Aesop’s pack will be carried over into a new journey, if and when you die.

So if you’re health is looking a bit low, you’ll want to quickly transfer any really helpful items to Aesop before you lose them altogether.

Aesop is helpful in other ways too. He’ll sniff out any more hidden useful items in an area to help you along for example.

As you start collecting items you’ll be able to craft weapons, traps and other things that you’ll need to protect yourself, such as a bigger bag or a trap to catch animals. 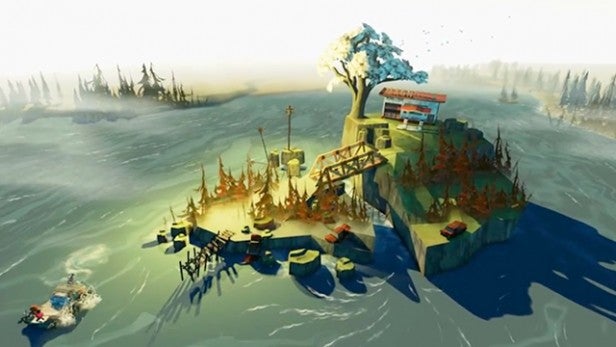 In order to decide what you need to craft, you’ll want to monitor Scout’s stats, which will you show when she’s feeling tired, unwell or otherwise not 100 percent.

And the world will do its best to throw its worst at you. Even enduring the rain storms and attempting to find a warm place to sleep can have its difficulties.

As you travel down the river you’ll be alerted to various stops along the way, which you can get to by directing your boats through the rapids. Areas include churches, which you can use to get yourself some food, campsites for shelters and other more unusual places to explore.

From what I’ve seen so far, there’s definitely going to be a pretty steep learning curve with The Flame and the Flood, as you figure out which structures will help you in your time of need. 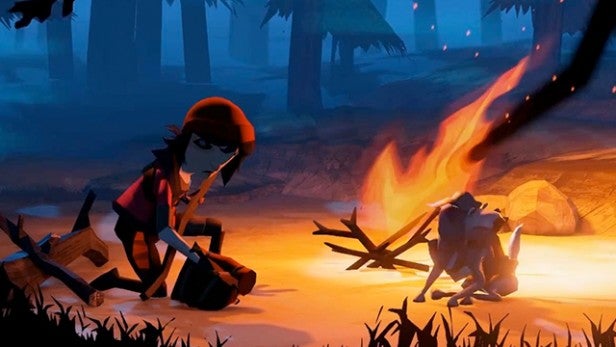 The gameplay is instantly immersive as you strive to keep Aesop and Scout alive, but part of that immersion comes from the stunning artwork used.

Developer The Molasses Flood has managed to enlist the aid of Scott Sinclair, the artistic director on titles including BioShock Infinite. The colour palettes are vibrant and the art style is very unique. It’s clear that Sinclair’s influences will distinguish this game from other titles on the Xbox Live Store.

I only experienced The Flame in the Flood for a short while, but it’s clear to see that the developer has taken the survival genre and given it a unique look and feel.

Plus, you’ve got a soundtrack from Alt-Country rocker Chuck Ragan, giving it that American backwater feel.

This could well be a huge hit for the indie scene on Xbox One, as it offers something refreshingly different. The impact of both its aesthetic and its inventiveness could be likened to Max and the Curse of the Brotherhood as well as BioShock Infinite.