Available on Xbox One (tested) and PC
In HBO’s superb crime procedural, The Wire, the criminals who end up in jail have a saying; “You only do two days: the day you go in and the day you come out”. That’s all well and good for a jailbird serving a life-sentence who needs to make peace with the fact that they’re never going to breathe free air again, but what if you’re planning to make a break for it? What then?

In that instance, you’ll find you’ll make every hour of every day count. In fact, good time management is a core factor in The Escapists, a new game by developer Mouldy Toof Studios, which puts players in the overalls of a prisoner and tasks them with busting out of an assortment of stockades. 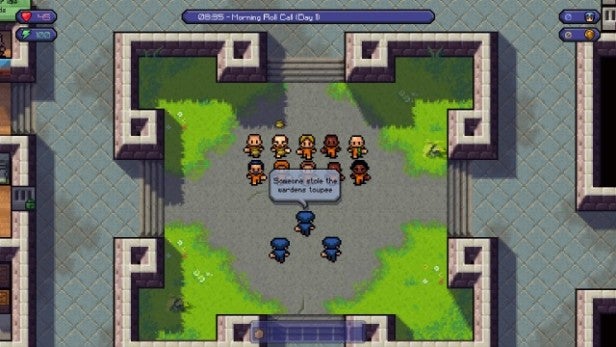 The Escapists takes place over a series of days, weeks and months – which fortunately don’t play out in real time – and every 24 hours is broken up into a schedule. Days typically start with roll call and the inmates then head to their first meal. There are chores to do during the day – such as working in the laundry – and inmates also have supervised time in the gym and in the showers (it’s not what you’re thinking). They also have the odd segments of free time, too, but for the most part they’re on a clock.

The reason it’s worth remembering all this is because there are penalties for being caught in the wrong place at the wrong time. If one of the guards find the player where they’re not supposed to be, they’ll be suspicious, and if the player keeps their errant behaviour up, the guards will eventually beat the tar out of them and send them to solitary – which kind of puts a dent in their escape efforts. Learning and sticking to the prison’s routine is key to keeping a low profile as the player goes about the business of escaping. 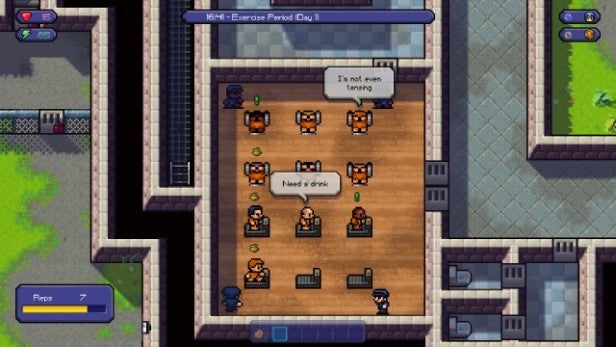 Ironically, for a game set in a series of prisons, the only way to describe The Escapists in terms of its structure is ‘open-world’. Players generally have the freedom to trundle around their surroundings, blocked only occasionally by the odd locked door or roaming guard. This not only gives them the option to investigate their prison and identify its weaknesses and possible escape routes, it also allows them to hob-nob with the other felons and pick up jobs and equipment.

Players will earn cash in the prison by taking on an assortment of jobs offered by other inmates – such as causing a ruckus at dinner allowing another inmate to slip away, or beating up a guard who extorted a teddy bear off one prisoner (seriously) – and this currency is needed to buy items they can fashion into useful equipment. 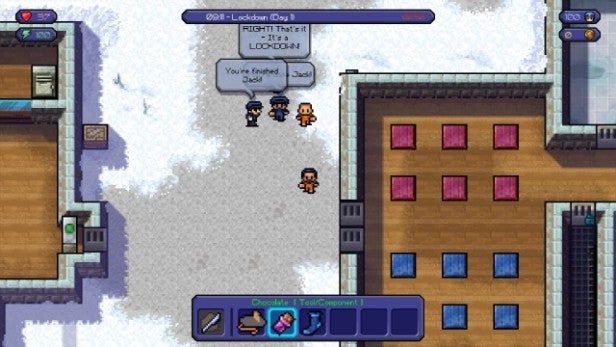 Combine a sock and a bar of soap, for example, and you have yourself a rather handy cosh, which makes battering guards and other inmates a doddle if you’re asked by prisoner to do this. (Otherwise we suggest hitting the gym and beefing up your strength in the weight room because the guards and prisoners in The Escapists aren’t exactly pushovers). Combine a sheet of metal with a tool handle using duct tape and you’ve fashioned yourself a flimsy shovel, which can be reinforced with more metal and tape later – and it’s worth doing this because flimsy items are… well… flimsy and they can break quite easily.

The crafting mechanic in The Escapists isn’t exactly what one would call intuitive. One of the downsides of the game is that it’s not immediately clear which items can be combined into something useful. However, it’s worth pointing out that there’s a handy wiki page for the game where some generous soul has catalogued all the items that can be crafted as well as the components needed. 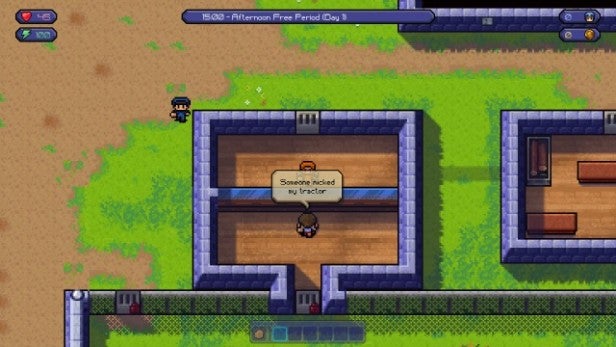 Players are also advised to find a safe place to stash their gear; if either a guard or another prisoner duffs you up while you’re going about your daily routine – which can happen quite a bit – you’ll lose any items you have on you. Furthermore the guards carry out spot checks on the cells throughout the day and if they find anything in your cell that looks suspicious, you’ll lose it. There are also metal detectors in certain areas of the prisons and walking through one of these while carrying anything you’re using to escape will trigger an alarm.

It’s also worth noting that the player’s activities can have consequences; in our play through after we’d roughed up an inmate named Mike at the behest of another jailbird, Mike would initiate the odd fight with us if we came across him in the hallway. When he did it in front of the guards, there was also a chance that we’d get hammered along with him – and in which case, we’d lose all of our gear. Since fighting is something of a Quick Time Event, this became quite maddening over time. 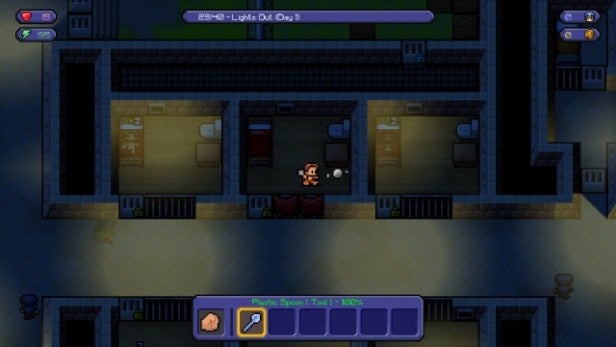 The real punishment comes, however, if your escape plans are uncovered. Players have to take care to conceal their activities from the guards – such as throwing a bedsheet across their door to ensure guards don’t see them scooting up into the vents, or making sure there’s a dummy of them in the bed when they’re out of their cell at night. They’ll need to keep out of sight of roaming guards with flashlights, watch out for patrolling jeeps and there’s even one prison where they’ll have a sniper to deal with. If their plans are discovered, they’re stuffed; The Escapists cruelly will dump them right back to where they were when they started with no equipment and any modifications they’ve made to their environment to aid in their escape eradicated.

It’s quite an old school level of difficulty, really, which sits nicely alongside the charming 8-bit presentation of the game.

Verdict
The Escapists may look cute and lightweight, but it’s a surprisingly deep sandbox RPG that punishes sloppiness and where players have a multitude of options in how they go about crafting their escape. Its learning curve is steep and hints are few and far between, but hey, that’s life on the inside for you.

Just take your time – after all, in prison, you have time in abundance.