Available on Xbox One, PS4 (version tested), PC
Fourteen months on from its launch on PC, The Elder Scrolls Online finally arrives on console with its subscription fees dropped and a new business model. This leaves us with two questions on our minds as we fire up the PS4: how well has TESO survived the transition, and how well is it holding up?

On the first count, pretty well. And the second? We’re not so sure. A year is a long time in gaming, and while TESO remains a solid MMO with a few odd quirks, it now looks and feels weirdly dated. Meanwhile, the tension between the solo RPG roots of the series and what we expect from an MMO isn’t getting any better. We still like TESO – don’t get us wrong – but we don’t like it quite as much as we did last year.

Generally speaking, the core gameplay is unchanged from the PC version. The action kicks off with your nascent hero imprisoned in Coldharbour, the plane of Oblivion ruled by the fiendish Daedric Prince, Molag Bal. After an escape you find yourself adrift in some corner of the continent of Tamriel, armed with whatever gear you managed to escape with, and ready to start your first quests. Where you start and which quests are open to you will depend entirely on which of the game’s three factions you joined during character creation, giving you three entirely separate entry points into the game. 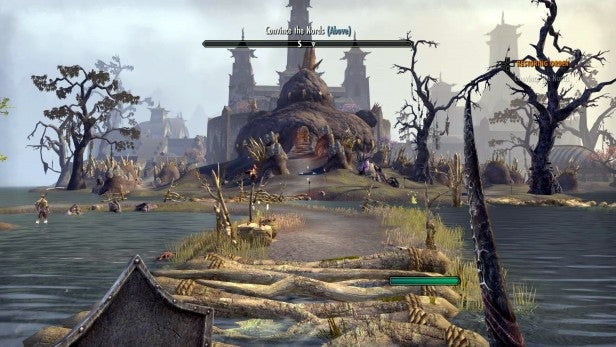 That’s important, because we’ve found that the nature and quality of the experience varies depending on which one you pick. Up to a point, you’re free to go wherever and do whatever you want, slaying monsters, accepting missions and generally doing good deeds. In practice, however, it’s best to let the game guide you. Following one chain of quests will lead you to new areas, where new chains of quests will open up. Strike out on your own or try to skip ahead, and you’ll find the going tough and the monsters tougher. You’ll die a lot.

It’s not that the combat is tougher on console. It’s still a kind of halfway house between the real-time, skill-based battling of Oblivion and Skyrim and the hotkey-based combat of a more traditional MMO, with the left trigger blocking, the right trigger striking, and the bumpers and face buttons unleashing spells and special moves. Moving and evading incoming blows is arguably easier with analogue sticks than with keyboard and mouse, and while remembering which attack, ability or spell you’ve assigned to which button can be a challenge, everything eventually falls into place. Buttons can also be reassigned to new powers at any time.

TESO also does a good job with the rest of a complex interface, drawing on Bethesda’s experience with Oblivion and Skyrim to create a system of menus, quest journals, maps and inventory menus that’s intuitive and quick to navigate. Sure, you’ll want to find somewhere quiet to change weapons or check your quest journal – with no pause, you’ll be open to attack – but you won’t find doing so tricky. 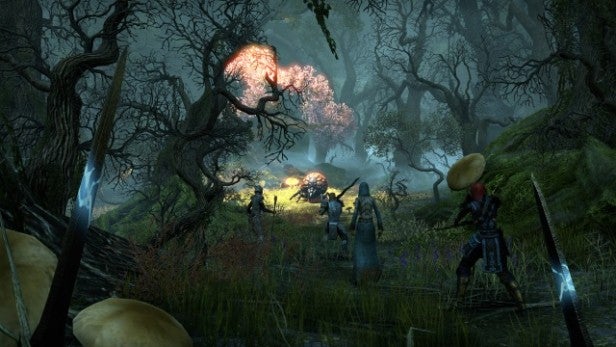 As far as the graphics go, the news isn’t quite so positive. On PS4, TESO looks plainer and less glamorous than it did on a PC with the settings turned up high, and while you can see Bethesda’s great art direction shining through, this game isn’t a match for Skyrim on last-gen consoles, let alone other next-gen RPGs like Dragon Age: Inquisition or The Witcher 3. For a game that’s full of sweeping fantasy vistas, the scenery can look dull and repetitive and the vegetation lifeless. What’s more, draw distances appear to be lower, while problems like texture pop-in and stilted animation crop up more often than they should. After months of playing the Enhanced Edition of this or the Definitive Edition of that, it’s a shame to see a PS4/Xbox One conversion that looks markedly inferior to the version we played last year. And while we haven’t experienced any connection issues or game-breaking bugs, others on the forum have encountered their fair share.

Of course, it’s hardly fair to compare an MMORPG with the latest cutting-edge single-player RPGs, but then TESO almost demands it. The fact is that, in its early stages, TESO still feels like a solo RPG. It’s not just that you can polish off substantial portions of the early game solo, but that you must do so; key quests are designed for solo players, you’ll find that different members of a group can’t join a quest in progress, and you’re held off from playing the multiplayer-focused quests and dungeons until you’ve reached level 10 or above.

This isn’t necessarily a bad thing. It helps TESO retain that authentic Elder Scrolls atmosphere, and means that players learn the ropes before they start grouping up. What’s more, some MMO players enjoy playing solo, at least some of the time. Most importantly, even when you’re questing on your own you’re rarely playing on your own. You’ll be surrounded by other players, and it’s not unusual for them to join you in taking out a ferocious mob or a tricky boss monster, or for you to do the same for them in turn. Sometimes this works to the detriment of the game – it’s difficult to feel like the hero who saves Davon’s Watch when everybody else is saving Davon’s Watch around you – but that’s kind of unavoidable for an MMO. 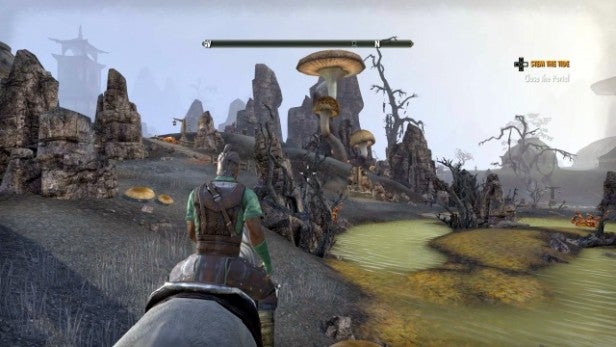 One thing we loved last year was the quality of the TESO’s quest design. Beyond the music, the blockbuster presentation, the background lore and the fully-voiced characters, the game built atmosphere through quests that gave you more to do than slay x monsters and collect their vital organs. There was detective work to be done, mysteries to be solved and some interesting moral choices to be made, all of which made TESO feel less like your average World of Warcraft clone, and more like a proper Elder Scrolls game.

This year, we’re not so convinced. Last year we signed on with the Daggerfall Covenant faction, and enjoyed an early game that seemed to sweep you naturally from quest line to quest line, the story deepening and growing more engaging as we moved along. This year we signed up for the Ebonheart Pact, and we’d have to say that the quest lines aren’t so engaging. There have been more straight kill-and-collect missions, several variations on ‘find my lost friend/brother/children’ and a worrying obsession with lost livestock. To balance this, we’ve had some epic, multi-part questlines with satisfying payoffs at the end, and the quests seem to be improving as we level up and build in power, but it just goes to show how different the experience can be depending on your choice of faction.

As we said, there’s a weird tension here between giving fans what they expect from an Elder Scrolls game and following the conventions of an MMORPG, and at times this threatens to pull TESO asunder. Yet it’s also part of what makes the game more interesting than many straight MMORPGs, particularly if you come more from the RPG side than the MMO. 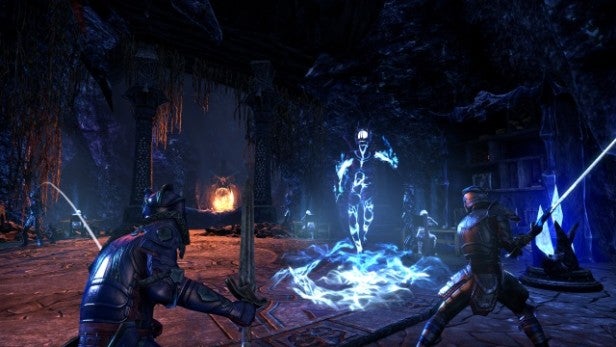 MMO veterans might be disappointed by the early game, but there’s plenty to get their teeth into later on. There’s more group content waiting once you do level up, with a mass of four-player group dungeons available, plus some smart group-finding tools to help you build a pick-up team to tackle them. Beyond this there are public dungeons and boss battles, plus large-scale, player vs player battles in the central realm of Cyrodil. Perhaps too much of this stuff is kept locked away until players reach higher levels – we’ve yet to reach the really lofty heights ourselves – but it gives players long-term goals to strive for.

One downside we hadn’t anticipated was the increased use of voice chat. This has its plus side when it comes to group activities and teamwork, and Bethesda has linked volume to distance, so you only hear other players when they’re reasonably close. All the same, there’s nothing more corrosive to a fantasy RPG’s atmosphere than loud hip-hop being blasted through another player’s microphone or someone’s brother/mate/mum/significant other waffling on to them in the background while you play.

It might sound like we’re down on TESO, but it’s actually still a solid and enjoyable MMO. It has flexible character creation that doesn’t shoehorn you into narrow roles, plus a strong progression system that allows you to take your hero in a range of different directions. Even when the quest design is dull, it never makes you feel like you’re grinding for loot and experience – the curse of far too many MMOs. The more you play, and the more time and energy you invest, the more engaging the whole thing becomes. 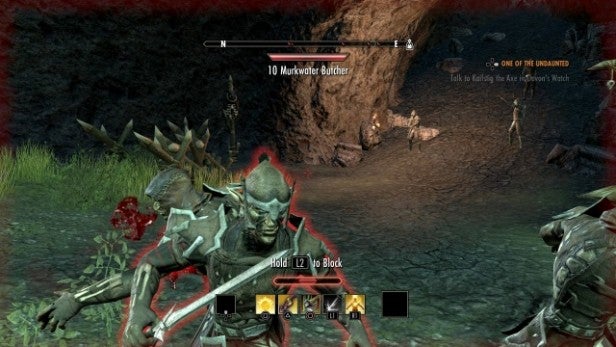 With no monthly fees to pay, there’s also no reason not to keep playing. While you can pay real cash for in-game currency, armour packs, familiars, mounts and other upgrades – not to mention memberships with monthly credits, progression bonuses and DLC – Bethesda isn’t forcing you to. At no point while playing TESO have we felt our progress blocked or stymied in an attempt to make us splash out.

Is TESO an essential for fans of RPGs, the Elder Scrolls or MMOs? No. The Witcher III and Dragon Age: Inquisition are both superior solo RPGs, and TESO struggles to match the freedom and drama of Skyrim. And while MMOs used to be short on supply on consoles, Xbox One owners can already turn to Neverwinter, while PS4 owners have DC Universe and Final Fantasy XIV: A Realm Reborn to fall back on. The latter is TESO’s biggest competitor, and one made more appealing by the upcoming Heavensward expansion. However, with a monthly subscription to keep paying it will cost you more long-term.

Verdict
While we’re not so impressed with the graphics, TESO has made a fine transition to console in terms of controls, interface and the all-important gameplay. At its best, it’s still a solid, exciting MMO, with masses to explore, some great quest-lines and some fun multiplayer gameplay later on. At its worst, you can feel it falling somewhere between being a solo RPG and a true MMO, and the quest-lines fail to grab your interest. Tamriel is well worth exploring on PS4 and Xbox One, but those looking for an MMO equivalent of a Skyrim or Oblivion may go away disappointed.