It says something about an expansion pack that its biggest defect is a bug affecting those who put between 50 and 120 hours into it. Clearly, this is a bit of a disaster for those planning to kick off The Shivering Isles then return to the land of Cyrodil and complete every quest and side-quest going, but think about it – how many full games are there where you would want to put that sort of time in? Now try and think of another expansion pack that offers that much gameplay. Many? I don’t think so.


(Note: I realise the bug will affect PC gamers much sooner, but Bethesda seems to be fixing the problem for them faster). 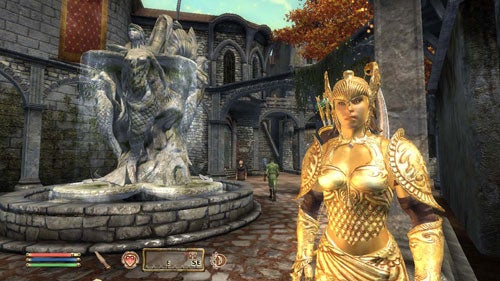 But then most expansion packs for established RPGs entail nothing more than a clutch of new quests and dungeons, a handful of new monsters, some new arms and armour and a few big baddies to batter to make you think you’re getting your money’s worth. Most, essentially, give you more of the same, just a little less thoughtfully put together and less exciting than you remember it. The Shivering Isles, in contrast, is basically a self-contained side adventure to the main Oblivion collection, taking you to a whole new region with a whole new central plotline and a comprehensive change of style. Think of it as a holiday within a holiday, to be taken either when you’ve finished Oblivion’s central quests and you’re looking for something to do beside clean up all the side quests, or when you simply want a change of scene. 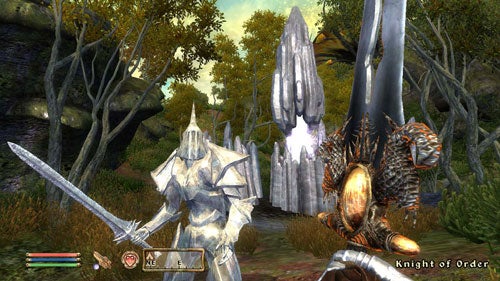 And what a change of scene it is. The Shivering Isles is a realm of madness, ruled by a crazed Daedric prince, Sheogorath, and reflecting his warped personality. The land itself is schizophrenic, split into a Northern region dominated by vivid colours and brightly rendered fungi, and a Southern region of ragged hills, gloomy swamplands and twisted vegetation. The two realms, Mania and Dementia, share a capital city, New Sheoth, which is itself divided into Manic and Demented halves, and each is guarded by a rival sect of Daedric females, the Golden Saints and the Dark Seducers. It’s a fascinating world, and if you can criticise The Shivering Isles for anything it’s that it doesn’t run with the schizophrenia theme enough. While quests frequently involve activities in both realms, there’s rarely anything that requires you to work the two in parallel in the way, say, Nintendo has done with its parallel realms in the Zelda or Metroid games. That would be genius. This is merely inspired.

All the same, it’s great to see Bethesda shifting away from the straight fantasy world it created for Oblivion and towards the less conventional world of Morrowind. Oblivion was classic high-fantasy stuff, mined from the Tolkien/Eddings/Feist vein, though with darker leanings visible when you ventured through the Oblivion gates into the Daedric netherworlds beyond. The Shivering Isles seems informed by a different sensibility. There’s a touch of Lewis Carroll in the giant mushrooms and nonsensical dialogue and the influence of Michael Moorcock in the baroque fantasy trappings and the twisted psychological overtones. With Oblivion, Bethesda showed that they could build a leading-edge graphics engine and use it to render the most gloriously lifelike and beautiful high-fantasy world ever created for a video game. With The Shivering Isles, it’s showing what that engine can do for something more dreamlike and imaginative. What’s more, this approach carries over beyond the look to the overall feel. There’s a real sense that, in Sheogorath’s realm, any rules there are are made to be broken. If you were growing tired of Cyrodil, don’t worry – this is something new. 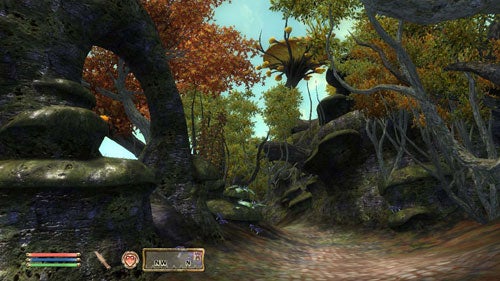 The same goes for the personalities and creatures that occupy it. Even the lowly cannon fodder critters are new to the game, while the supporting cast is smaller but also richer for it. Madness is very much the theme, with enough deranged witches, paranoid nutcases and lunatic substance abusers to fill bedlam. One woman keeps a tame zombie in her bedroom and calls it ‘Uncle Leo’, another weeps for her colossal, Frankenstein’s monster of a child, while another man begs you to kill him in a way he can’t see coming. Mania is ruled by a narcotic-loving bon viveur, while Dementia is ruled by Lady Syn, a paranoid aristo who is convinced that her subjects are conspiring to get rid of her (and the fact that she’s right doesn’t make her any less crazy). Basically, this isn’t your usual elves and goblins setup. 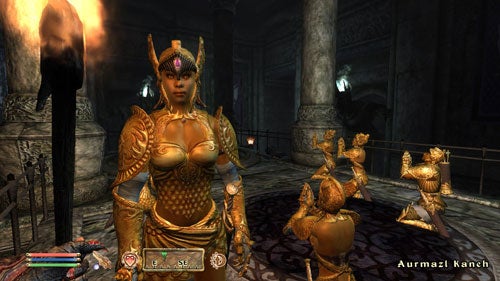 These themes have even worked their way into the missions. At first, you’re pretty much clueless. Sheogorath has summoned you to his realm and wants you to make yourself at home, but it’s several hours in before you discover your main task. In the meantime, you’ll be kept busy wondering through weird, insect-filled tunnels while addicted to a strange narcotic with a fiendish comedown, cruelly testing fellow adventurers with trials designed to take their lives or their sanity, then torturing the local populace as part of a high inquisition. It’s Oblivion, but not as you know it.

The interesting thing is that the combination of the twisted environment and the primarily unpleasant population has you making moral choices that you wouldn’t normally make in the regular game. In the main game my character has been a bit of a goody two-shoes, but let loose in The Shivering Isles he’s been forced to take a more, shall we say, pragmatic approach to getting the job done. If someone needs to be poisoned, pushed off a high wall or murdered in cold blood, then so be it, and if villagers have to be massacred or one faction needs to be betrayed, then that old adage about omelettes and breaking eggs may well apply. As it’s hard to proceed without adopting Sheogorath’s ‘flexible’ values, you could argue that this removes some of the freedom of choice that Oblivion provided, but it certainly makes for a deliciously dark tale. The side-quests, meanwhile, are enmeshed in the region’s nutjob lore and petty squabbles. There’s none of the guild-related, sword for hire stuff that made Oblivion such a time-sponge, and the landscape is nowhere near so vast, but that doesn’t mean you won’t find plenty to keep you busy if you choose to veer off the central path. 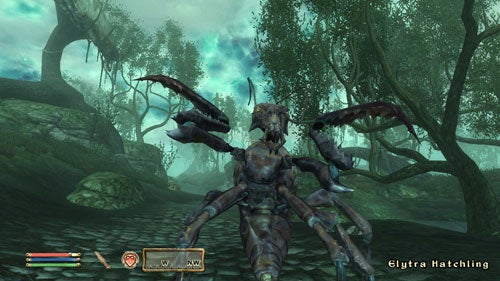 There are, of course, rewards for doing Sheogorath’s bidding. Early on the expansion pack starts dishing out unique special weapons and items – you just have to love a schizophrenic sword with day and night forms – and by collecting the island’s distinctive madness ore and sorcerous ‘matrices’ you can have the local smith create weird new arms and armaments that should have you cutting quite a dash once back in Cyrodil. However, the real rewards of The Shivering Isles lie in something less tangible. The more the adventure moves on, the more you realise how far ahead of most other RPGs Bethesda’s classic was. In The Shivering Isles, as in Oblivion, levelling and looting aren’t the real reasons you keep on coming back: it’s the experience not the XP that counts. You want to explore the world to its full, try everything once, or just see what happens next. Few games combine fighting, sneaking, diplomacy, exploration and a spot of detective work with this much grace, and there aren’t many RPGs that give you such a sense of immersion in a magical world. 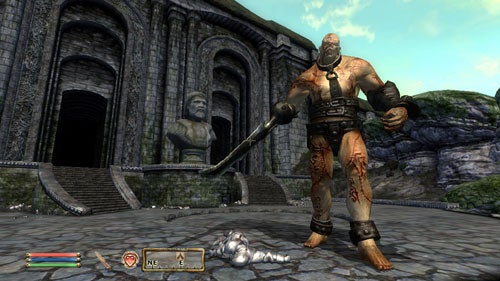 True, the illusion is often broken. Even though Oblivion’s character AI was cutting edge, it still stopped well short of creating truly believable characters. Why? Because the cast seemed unable to recognise changing contexts or react to your activities beyond a simple knee-jerk response. The same remains true of The Shivering Isles, where the Golden Saints in New Sheoth will still hail you cheerfully even though you were directly responsible for the butchery of their comrades in the eldritch halls of Cylarne, and where the duke of Mania will eat his dinner untroubled despite the fact that his cook will have waded over several corpses on his way to the kitchen. Me? I think I’d order takeaway that night.

All the same, I think you’ll be more than willing to turn a blind eye to such defects. By the time Sheogorath has you working on the main quest proper – the prevention of a cyclical event called the Greymarch which sees the forces of order (or boredom) destroy his schizoid kingdoms – you’ll just be too caught up in the unfolding events and your ever increasing powers to carry on picking holes in the game’s AI. Simply put, The Shivering Isles is as horribly addictive as Oblivion ever was. As an example, I planned to put in a quick hour of play at 9pm last night before writing this review. At 1am I realised that this might have been a mistake… 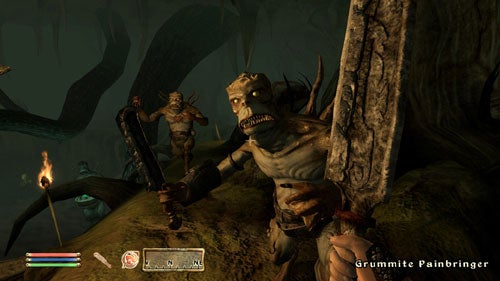 Normally, it’s hard not to be a little ho-hum about expansion packs. They are there to serve the faithful, and as long as they give the hardcore fans more of the stuff they liked originally, then they have done their job. The Shivering Isles, however, really is something different. If it reminds me of anything, it’s The Legend of Zelda: Majora’s Mask – a ‘side story’ that took the central game elements of Ocarina of Time and used them to build something rich, strange and intriguing. The Shivering Isles does much the same thing. It’s not an absolute essential for anyone just getting started in Oblivion – the main game has more than enough to keep most people playing for a year or more – but anyone who has fallen for Bethesda’s creation will find this a compulsive companion to last year’s finest RPG. At less than £20 it offers better value for money than most full games.


Much, much better than the average add-on, The Shivering Isles is a superb expansion that dares to take Oblivion somewhere new and undeniably fascinating.