If you read around a bit, you’ll come across several opinions on The Darkness – and all of the sensible ones will be good. Some people merely think it’s another fine leftfield FPS from the creators of Chronicles of Riddick: Escape from Butcher Bay. Others think it’s a storming cinematic FPS let down by a few minor shortcomings. Me? I think it’s easily the best FPS so far this year, and the best narrative-driven FPS since Half-Life 2: Episode One. 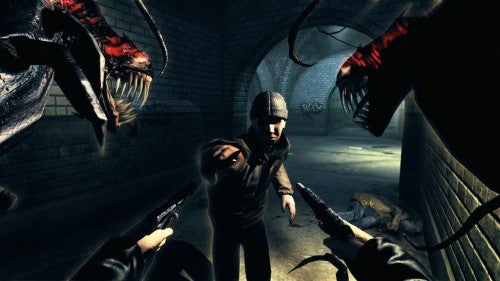 I don’t bring up the comparison without reason. If you wandered through Episode One complaining that the technology hadn’t moved on enough since Half-Life 2 and bemoaning the limitations of the AI, then you’ll likely have some reservations about The Darkness. If, however, you let the game under your skin; if you warmed to Alyx and the rag-tag rebellion; if you recognised it for the compelling, emotional experience it was and loved every single minute of the ride, then you might feel the same way about The Darkness too. In the end, it’s just one of those games. I can’t imagine anyone playing it and coming away totally unimpressed, but some of us are going to get more caught up in it than others. 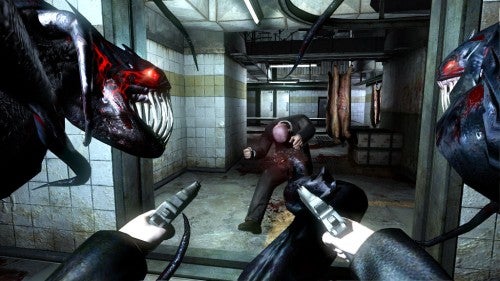 To be honest, I didn’t start out thinking I would be one of them. The game’s opening sequence – a frantic car chase through a New York transit tunnel – is certainly arresting, but the hero and the initial setup left me cold. A long-haired, leather-coated Mafiosi killer, Jackie Estacado seems to be your standard-issue urban anti-hero, and his betrayal at the start of the game ticks all the gangland cliché boxes. The language seems excessively packed with profanity, and the violence seems gratuitous and overdone. The game’s major twist – his possession by the forces of “The Darkness” of the title – seems sudden and poorly explained. The early gunfights feel limp, and while Jackie’s newfound abilities to summon demonic servitors and control a vicious snakelike emissary put a cool spin on the FPS formula, there’s little to make you think you’re playing anything particularly extraordinary. Coming from the guys behind Riddick, you can’t help but feel a little disappointed 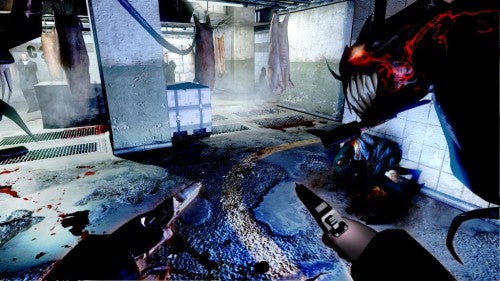 Just give it time. Steadily the game and its world opens up, as new characters are introduced and the game gives you more room to explore its New York City setting. The action starts to find a rhythm, and you uncover new ways in which your abilities can be used. It’s true that you’re restricted to a few, slightly claustrophobic city locations, linked together by subway trains and stations, but if keeping you on a tight leash helps build this sort of atmosphere then I can see why Starbreeze stayed away from a larger, free-roaming world. As the game kicks into what first appears to be a simple tale of supernatural revenge, you begin to learn more about your abilities. You come to understand that, as in Riddick, taking out the lights gives you the advantage. 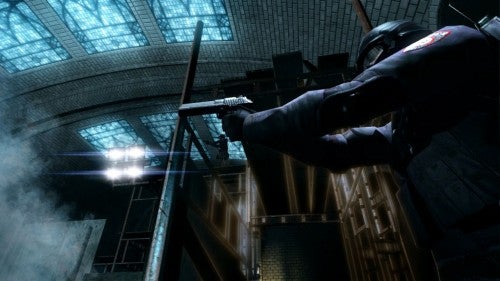 It’s not just that your powers help you see while your enemies can’t (love the cool pulsating lines effect, Starbreeze) but because they actively feed on darkness. With time, you discover that the creeping, wall-crawling minion you can send out under your direct control isn’t just a means of solving simple puzzles, but the easiest way to eliminate tricky enemies and soften up a room before you enter. With time, you find out that you can just play through the main plotline in linear fashion, but you can also take on RPG-style side-quests and unlock bonus rewards. Two hours in, and The Darkness seems to have a hold on you. 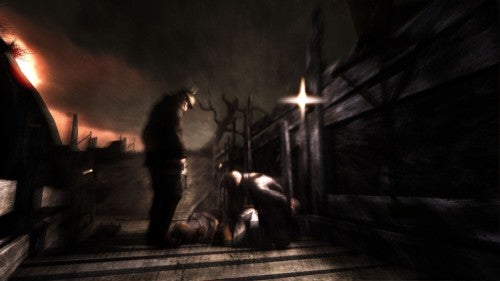 More interestingly, some of your expectations start to get overturned. Jackie isn’t the gun-crazed, goth goon you might have taken him for, but a man with a conscience and The Darkness isn’t an orgy of demon-powered destruction, but a measured, oddly sombre experience leavened by the odd deft touch of humour. It’s a game that lets you take your own approach to situations, allowing you to mix and match your supernatural powers with gunplay as you see fit. And while you might have seen them coming, the game hits you hard with two sucker punches in a row. Before you know it, you’re out of the grimy urban badlands and fighting your way through a hellish WWI-inspired netherworld, where the muddy trenches meet the horrors of Silent Hill.

I won’t say anything more because I don’t want to spoil it for you, but by this time you should be totally hooked. Once it hits its stride, The Darkness is wonderfully paced, and Starbreeze prove time and time again that they know just when to throw in a huge set-piece, when to give you a new power to play with, and when to keep you constrained or allow you to unleash your full supernatural armoury. Additional summoned minions, adding covering-fire or kamikaze bomb attacks, are a constant source of pleasure, and the black-hole Darkness power is one of the most spectacular weapons I’ve seen for a while. 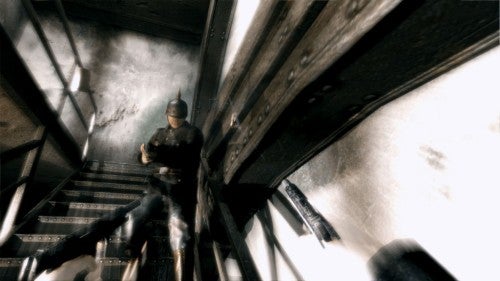 What’s more, The Darkness has some of the best set-piece shoot-outs I’ve enjoyed since F.E.A.R. – you have to love the levels set in a deserted subway station and an abandoned Turkish baths – and some of the most genuinely unsettling sequences I’ve had outside of a major survival horror series. It was clear from Riddick that Starbreeze understood how to put together a cinematic game, but The Darkness is full of little directorial touches that make the game as cohesive and engaging as anything Valve has ever managed. It’s reasonably lengthy too. Several times I’ve found myself fearing that the game was about to reach a premature end, only for a whole new chapter to unfold. 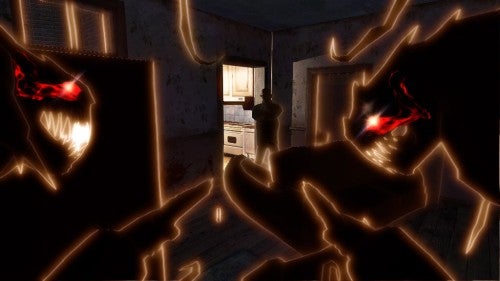 Of course, there are some areas where you can pick holes, and most of them have to do with the underlying technology. Visually, the game is indisputably magnificent, building on the normal mapping and lighting technologies used in Riddick to create convincing characters and urban environments, or nightmare vistas of mud, fog and rust. Ambient lighting and blur are employed with skill, and the use of post-processing effects, texture and colour is as good as GRAW2 or Gears of War. The audio is equally strong, with a great, responsive score and some fabulous use of 5.1, both for atmospheric noise and the full-on bang and blast of battle. All the same, even I have to admit that its slightly off-putting that so few doors on the average street can be opened, and that the streets are so empty of citizens. More seriously, I also have to admit that the AI is more along the hide-and-fire lines of, say, Call of Duty 2 than the aggressive, co-operate and outmanoeuvre lines of F.E.A.R. As a result, there are times when The Darkness feels like a throwback to the days of Deus Ex than a true next-generation shooter.

Finally, I should also add that the multiplayer aspect has potential, but I’m not entirely sure it’s being realised. Adding minions and shape-shifting to the basic deathmatch and capture the flag modes is fun, but there seems to be an awful lot of lag and the maps are a little uninspired. I’m sure I’ll give it another try, but for the moment I’d sooner fill my time on Xbox Live with Shadowrun or Call of Duty 3. 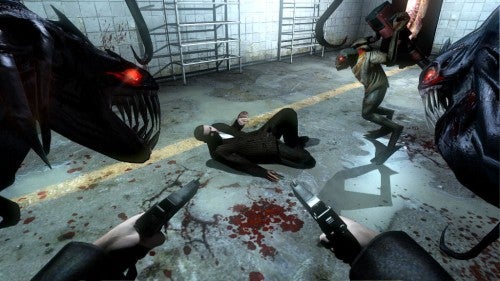 Overall, I’ve been having an internal dialogue ever since I started playing The Darkness: is this ‘just’ a great game, or is it an absolute belter that anyone with a PS3 or 360 ought to own? My critic’s head says the former – the AI is too iffy, the world too limited and insubstantial to put The Darkness up there with a Half-Life 2 or a Resident Evil 4. But as a fan of games, and someone with an old interest if largely dormant interest in comic-books and horror, I’d have to say the latter. What it all comes down to is this: The Darkness has captured my imagination and made me more excited to see what happens next than any game I’ve played in, well, I don’t know when. Feel free to have your own opinion, even if it disagrees with mine. Go on. Get caught up in the dry feature comparisons and technical shortcomings if you must. Me? I’d rather stop talking, and get myself back to the game.


Starbreeze proves that Riddick was no flash in the pan with the most tightly-paced, compelling and atmospheric FPS of the year so far. Niggle about dated elements if you must, but embrace The Darkness and you won’t want it to end. 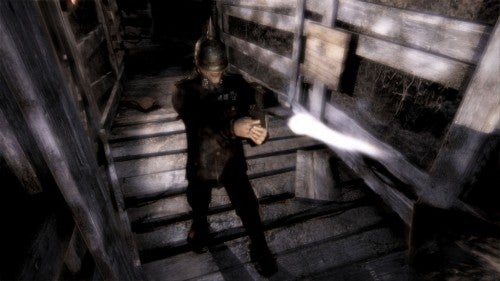