Available on PS4 (reviewed), Xbox One, PC, Xbox 360
It’s hard not to be impressed by the sheer scale. The Crew might have miniaturised the USA, shrinking states and cities so that they’re boiled down to an essence, making Chicago to New York a fifteen-minute drive, but this is still the most expansive open world of any racing game. It makes the Franco-Italian and Colorado settings of the Forza Horizon games seem tiddly, while Need for Speed: Rivals and Most Wanted can’t compare. The nearest open worlds would be the Hawaii and Ibiza settings of Test Drive Unlimited and its sequels – games you’ll soon find lurking in The Crew’s DNA – but even these can’t match The Crew’s massive landscapes for size.

These aren’t empty landscapes, either. The cities might not be accurate, but each one captures the most iconic architecture of its real-world inspiration, and a little of the feel. The freeways might not go on for miles and miles, but from the wild coastline of Northern California to the grasslands and forests of Dakota they traverse some incredible scenery. The streets teem with cars, buses, taxis, trucks and people. The tracks outside the cities are busy with wildlife, albeit some strangely suicidal critters. And everywhere you go there’s something to do, whether a full-sized event or a bite-sized challenge, that might see you slaloming around markers or speeding through gates in return for cash, experience points and car parts. 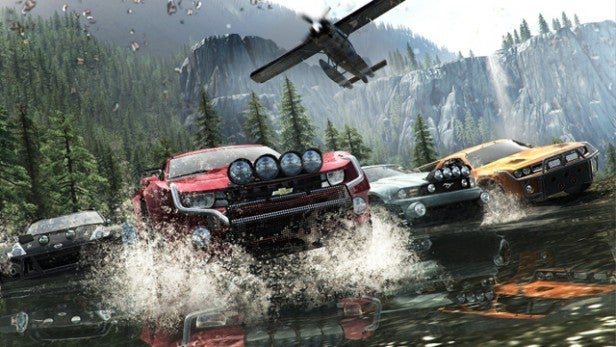 Many of the team at studio Ivory Tower worked on Test Drive Unlimited and Unlimited 2, and it shows. Like Eden’s almost-classics this isn’t the kind of game that wants to lock players to a track or shuffle you from one event to the next, but a game that wants you to explore. Whether on the road or off the road you’ll find places to go, rivals to beat, secrets to uncover and challenges to master. As with Forza Horizon 2 there are fast travel options that you’ll barely use, just because driving from one place to another is a rewarding activity in itself.

Nope, the world is undoubtedly the star of The Crew. If The Crew has problems, they’re the result of other things. 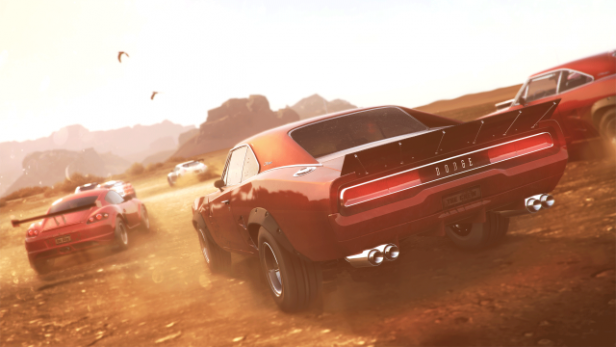 One of these things is the whole premise. The Crew seems to have been designed by people who’ve watched too much Fast and Furious and played too much Need for Speed – and we’re talking Need for Speed: Carbon and The Run, not Need for Speed: Hot Pursuit. We get another hackneyed tale of criminal street racers, murdered kin, a protagonist framed for a crime they didn’t commit and an FBI-sponsored attempt to infiltrate the underground fraternity. The illegal racing gang, the 510, featuring every criminal cliche in the book, and the protagonist – a modishly bearded gent more likely to be searching for the best ristretto in Shoreditch than racing contraband motors, is no better. If the plot doesn’t put you off, the nonsense sputtered out by every cast member will. The Crew has a lot of cut-scenes, and were it not for the skip button they’d be almost beyond endurance.

Not all is well with the gameplay, either. The handling is fine, but not always that engaging. Cars drive like you’d expect a vehicle of that size and power to, but there’s no real sense of tyre connecting with tarmac, dirt or shale, and certainly not the kind of feedback you get in Forza Horizon 2 or even DriveClub. And while some of the events – particularly the off-road ones – are a lot of fun, there’s a whole host of minor niggles that continuously get on your nerves. 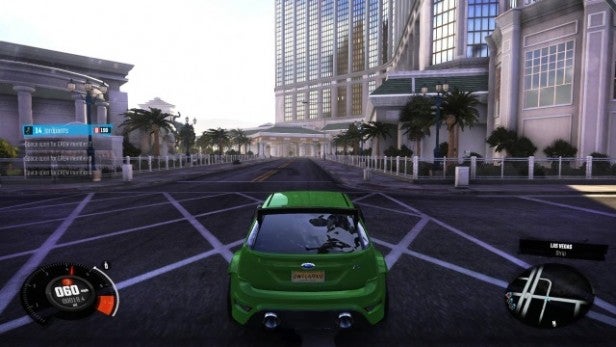 The worst offenders include a weird satnav indicator that floats in the sky, forcing you to keep flicking between the road ahead and the space a few metres above it, and a failure to mark the course out properly off-road. Street races are messy, with weird moments that see rival racers almost warping from a position seconds behind you to a position just a few feet off your tail. Most annoyingly, The Crew loves to punctuate the racing with takedown missions, but then makes your targets both too speedy and too agile. You can run them down, but it usually takes a few goes to learn their route and work out at which points you can reach them when they’re at their most vulnerable. This turns out not to be that much fun.

Why, meanwhile, do so many people in The Crew give you something valuable to deliver then insist you drive like a maniac within some completely unnecessary time limit to get it there. In the world of The Crew, supermarket click-and-collect schemes would tell you to be at the store within two minutes or they’d pulp your whole shop, charge your card double and take a sledgehammer to your car when you got there. 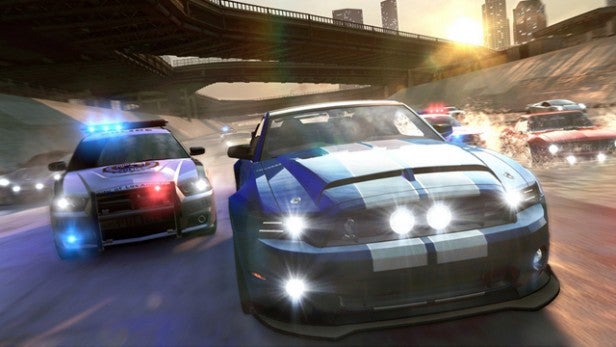 As for the police chases… well, I thought that after Watch_Dogs I’d suffered my year’s share of being relentlessly pursued by psychic cops on the streets of Chicago. Not only was I wrong, but the gits have turned up in New York, Las Vegas and everywhere else from the West Coast to the East. You’ll either lose them in seconds by driving off-road, or you’ll have them on your tail for twenty minutes.

Even the game’s attitude to cars is baffling. You can collect cars and customise them for the different types of conditions and events, but the game usually lends you a car to complete the more unusual types, and encourages you to keep updating one car with different racing kits rather than play the field. Upgrades are awarded for completing events and challenges, but they seem to adjust stats – like equipment in an RPG – rather than make a tangible difference to how the car drives.

You’re not thinking about how to allocate your resources and tune your vehicle for best performance, merely grinding for upgrades to make your car a little faster in the next event. 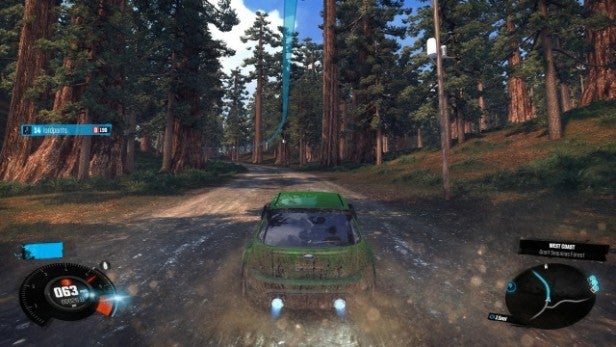 There are shortcuts. Driving well and completing missions will earn you perk points, which you can spend with the crew members you unlock during the game to boost your braking or handling, get a bonus on experience points or make upgrades and repairs cheaper and/or more convenient. Rather less salubriously, you can also spend real-world cash on in-game currency to buy additional perks and upgrades. The game doesn’t go overboard in forcing this on you, and we managed perfectly well without, but you know it’s all going to end in tears once players get involved in the PvP-heavy endgame.

The Crew’s strength is its variety. With so much country to cover there’s a wealth of tracks and conditions to explore, and while the whole criminal gang framework is a bore, it means you’re rarely doing one thing for too long. Bezerk off-road scrambles follow tightly-wound street-racing tussles, and you can make it through the next takedown knowing that there might be another checkpoint race along some winding forest road around the corner. 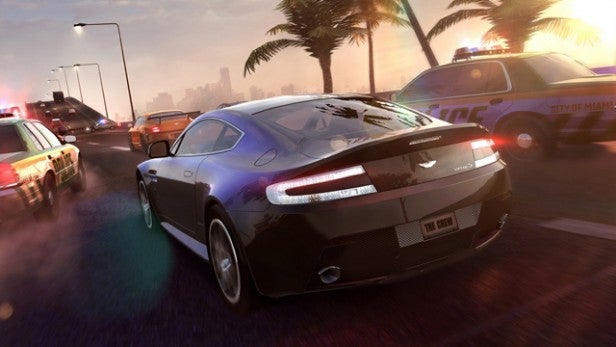 The game’s arguably at its best when you’re not really doing anything, just taking in the scenery, enjoying the road network and tackling the odd challenge as you come across them. The racing can be thrilling, too. The upside of those ludicrous deadlines and of all those races where you have to come first or fail is that the action gets intense. There’s almost no room to slip up in many races, keeping you on the edge of your seat until the end.

It’s not the most amazing-looking racer. The lighting and some of the textures can have an oddly last-gen look about them. Neither the scenery nor the cars have the detail or lustre of those in Forza Horizon 2 – or even DriveClub – and the frame rate falters in the busiest urban scenes. Yet there’s something amazing about The Crew’s model-village version of America. One night I drove from Vegas to San Francisco just for the hell of it, and watching the landscape turn from desert to mountain to primeval forest to sweeping coastline made The Crew seem strangely wonderful. 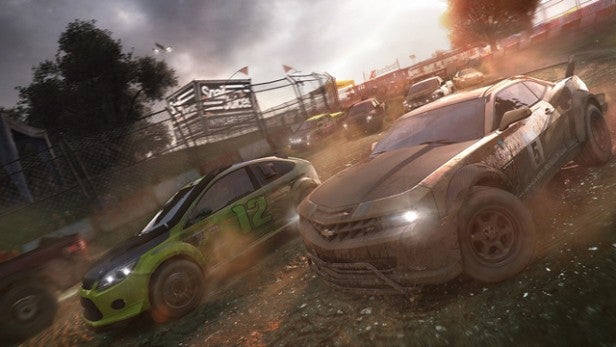 The game’s real USP should be its online elements (hence the title) but these turn out to be a double-edged sword. Some events, and particularly the takedowns, are a lot more fun if you can mustre another one to three players, and the default option for starting a new mission is an ad-hoc, co-op attempt. Find some friends with copies and join up for a session, and you’re playing The Crew as it’s meant to be played.

Play it with strangers, however, and it doesn’t quite come together. Either nobody responds to your call for co-op action, or you’re told that there aren’t any players in your session. Even when you do find someone who wants to team up, they often want to drive off and do something different, giving you the choice of tagging along with them or carrying on on your tod. In a way, The Crew faces the same dilemma as Destiny: how do you encourage players to work together when they join the game apart? Yet where Destiny does it with smart mechanics and powerful loot motivation, The Crew struggles to pull players together. 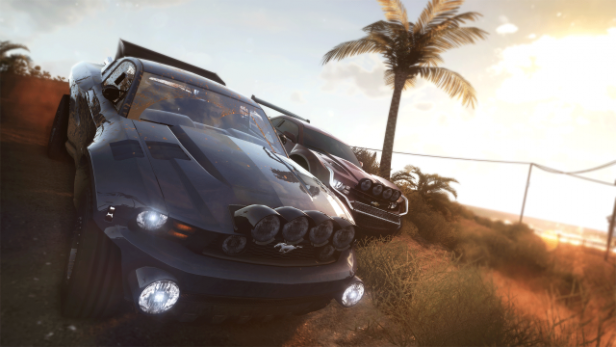 It’s worth exploring the multiplayer aspects. Players can join factions, take part in Player vs Player races or simply drive around together, tackling challenges and taking in the views. With time you’ll probably develop a network of players, but if you don’t The Crew won’t be as much fun long-term.

This is a bold, ambitious racer, and a natural next step from Test Drive Unlimited and Unlimited 2, but as with those games there’s something missing. With more tweaking, some work on the graphics engine and some tweaking of the missions and mechanics, we could still be looking at a cult classic racer. For now, however, The Crew, is a little too hit and miss.

Verdict
The Crew has a fantastic open world to explore and some excellent racing, but too much is second-rate about the visuals, the handling, the narrative and the mission design for it to make the most of all that good stuff. It’s worth playing for the scenery, the challenges and the variety of the gameplay, but it’s neither polished enough nor consistently strong to stand up to Forza Motorsport 2 as a thoroughbred next-gen racer.