Now this is what you call a genre mash-up. The new game from Project Gotham maestros Bizarre Creations is a third-person shooter that you play like a cross between a racing game and a lightgun game, yet has much of the look and feel of an arcade beat-em-up. Frankly, it’s not easy to get your head around all that – but then it’s not always easy to get your head around The Club. 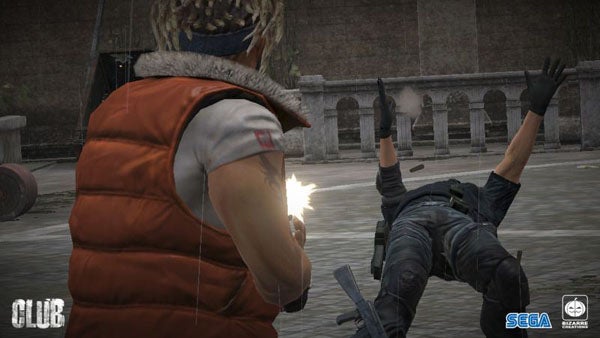 Play something like Gears of War and you basically know where you are. You start at one point on the map, make your way to an objective or an exit on the other side, and try your best to kill anything that stands in the way. The Club is very different. True, in the most basic game mode, Sprint, that’s exactly what you’re doing. However, simply getting from A to B while blowing up enemies X, Y and Z really isn’t going to get you very far. The Club isn’t just about surviving; it’s all about shooting with speed and style. If you’re a cowardly custard camper or the kind of bore who likes to carefully work their way through a shooter, headshot by headshot, The Club probably isn’t for you. 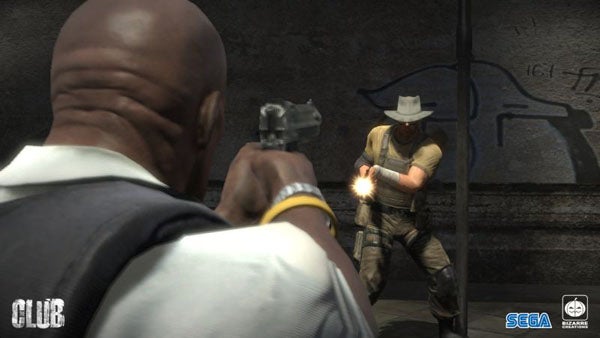 As you might remember from our preview, the storyline is a reworking of The Most Dangerous Game/Hard Target and Fight Club, where an elite group of morally bankrupt moneybags hosts an underground kill-or-be-killed competition, dragging in fighters from all over the world. Essentially, the set-up is much like the King of Iron Fist tournament in the Tekken games, with eight playable characters, all of whom have some sketchy storyline and a reason to enter the fray. The Tournament is played out across eight different locations around the world, and each location has six or seven separate events. Some will be sprints, where you simply have to get to the exit. Others will be Gauntlet events, where you do the same but against a worryingly draconian time limit. Others may be Siege challenges, where you must survive for a set period without leaving the prescribed area, or Survival events where waves of enemies converge on your location. Finally we get Time Attack, where you have to run a course through the level, managing up to three laps while killing foes, shooting targets and collecting tokens to keep the meter running long enough to reach the finish line.

Survive and complete each event and you make it to the end of that stage of the tournament. Earn enough points while you’re doing so and you can finish in a podium position and go on to the next stage. The challenge is, then, not just completing each event but completing each event with more points than your rival contenders. On the easy ‘casual’ setting this isn’t much of a challenge, but switch up to the ‘reckless’ setting and you’re in for a shock. Suddenly, you’re not coming first but down towards the bottom end of the results table. This is The Club’s way of telling you to raise your game. 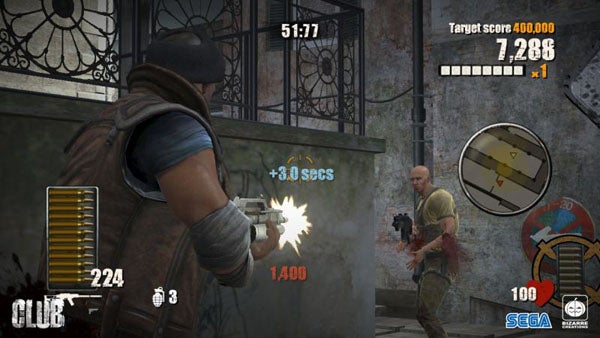 Doing so takes practice. The trick isn’t just killing your enemies but chaining together those kills into tasty combos. Basically, ABK, or Always Be Killing. Take out the guy on the left at close range, then squeeze the left trigger to zoom and pop a headshot on the guy to the right. Now hit the ‘skullshot’ target on the wall to keep the combo going and rack up your bonus, then push forwards and blast the guy coming round the corner. Keep the kills coming thick and fast, and you might just end up with a high score at the end. Headshots, ‘penetrator’ shots, and death rolls (roll into position, then pop) all help, as do explosions that vaporise multiple targets in one go. The game even rates you for what weapon you’re using and whatever your now dead foe was packing. In the meantime, you also need to balance the demands of combo maintenance with those of survival. If you don’t grab health packs where available and watch your own back, you might not even get to the end. 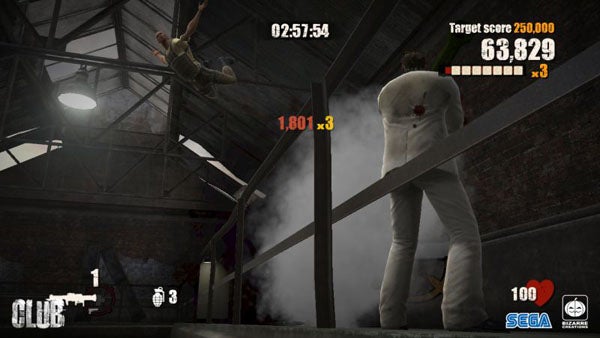 To be honest, managing all that is going on does take some raw talent – and some solid experience in other shooters goes a long way – but it also takes repetition. Knowing the level, the position of the skullshot targets and the directions from which enemies will come will enable you to plot your route through and chain together combos. Understanding which weapon to use at which time will also boost your high score.


This is also where choosing the right character comes in handy. Of the eight options available, some – like the Russian, Dragov – are slow-moving tanks. This gives them an advantage in Survival and Siege events but not in the Gauntlet or Time Attack challenges. Others – like the Japanese cop, Kuro – max out speed at the expense of strength and stamina. As in a fighting game, you have to learn to work with the strengths and weaknesses of each character. As the disgraced US cop, Renwick, you can afford to take a fairly balanced approach, constantly moving forwards and hitting hard where it counts. If you play as the Nigerian bruiser, Adjo, then you can’t move so fast but you do have brute strength on your side. In a way, these guys also work like cars in a racing game. While you can theoretically tackle any event with any character, some combinations work better than others.

The main tournament mode has enough challenge to last you a good few hours. Play it on Casual just to learn the levels and the ropes, then start working your way through Reckless and beyond for a more satisfying long-term trial. I suspect, however, that the real meat of the game will turn out to be the single event mode, whereby you can tackle any unlocked event in any unlocked location at will, with different score barriers for the different difficulty settings. Not only is busting open an event on Reckless or Real difficulty level an achievement in itself; your score also goes on to the online leaderboard. This is where the addiction really sets in. At first, even the basic completion score will seem out of reach, but after a few goes you’ll figure out how to work your way through the level and chain together the mightiest combo. Once you’re on the board, you’ll look at your position with horror and start working on little ways you can climb by racking up the bonus points a little further. It’s a bit like the online time trials in a decent racing game. Just as you can spend hours whittling your time down on a single track, so you can do the same in The Club just building up a score on a single event. 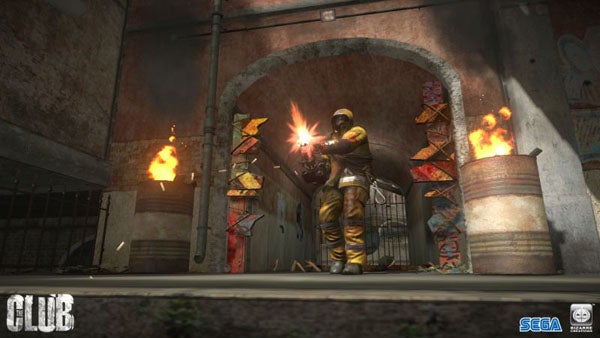 This is good fun, and there’s no question that The Club is a refreshing change from your usual third-person or first-person shooter. The relentless pace turns each event into a three minute thriller where every headshot counts, and there’s a real sense of your skills improving. The biggest problem the game faces is that I suspect its demands won’t suit everyone. It’s a game for those with an insatiable love of the high score, an eye for the perfect head shot and an insatiable desire for perfection. You need not to mind repeating the same event over and over again if that’s what mastering it takes. Not everyone can adopt that kind of mentality. Not everyone will love The Club. 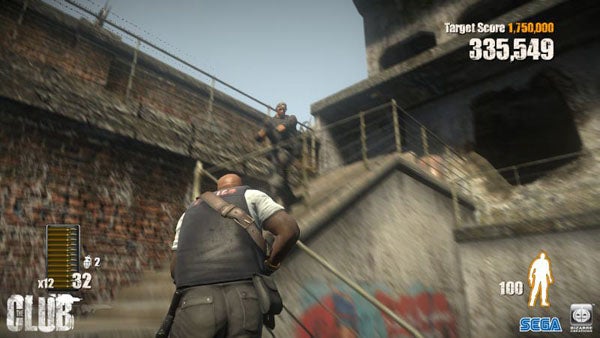 And it doesn’t help that The Club doesn’t do all it could to drag players in. Bizarre has given it a wonderfully consistent and coherent aesthetic – think industrial, think rust, think scrawled concrete and decay – and gritty art style, but the result is worryingly short on spectacle. The levels aren’t exactly beautiful, and even though the individual settings sound cool – an abandoned English mansion, a rusting cruise liner, the back streets of Venice – they’re surprisingly samey once you actually start ploughing through them. Both the 360 and PS3 versions look fine – bar the occasional bit of slowdown – but neither really pushes the host machine that far. Even the sound feels a little subdued. The rather understated sound effects might match the visual style, but they can make the game sound less exciting than it actually is.

What’s more, it’s disappointing to see how little the characters can interact with the environment. Sure, you can kick or barge your way through certain barriers or blast through the occasional balcony, but a lot of the time you can throw grenades or blast gas tanks all over the shop and barely anything will collapse or crumble. Your guy can vault over some obstacles, but not over the many waist high barriers dotting the level. You can’t help wishing you were in control of someone more athletic, who could do more than simply run, roll, aim and shoot. 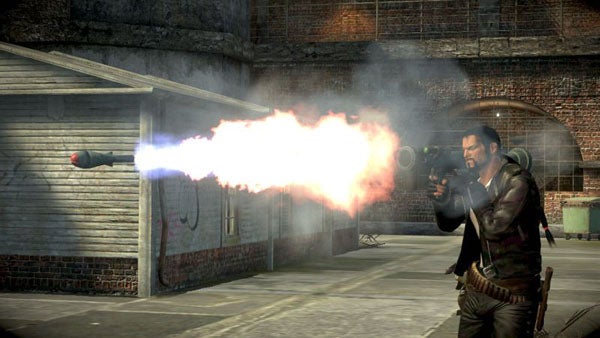 Multiplayer is a bit of a mixed bag, too, though not in a way that’s directly the fault of the developers. At the moment, most players seem to be going for the straight deathmatch game, which doesn’t really play to The Club’s strengths. The alternative Siege and Fox Hunt modes are more interesting and enjoyable, so we can only hope that more pick them up as time goes on. 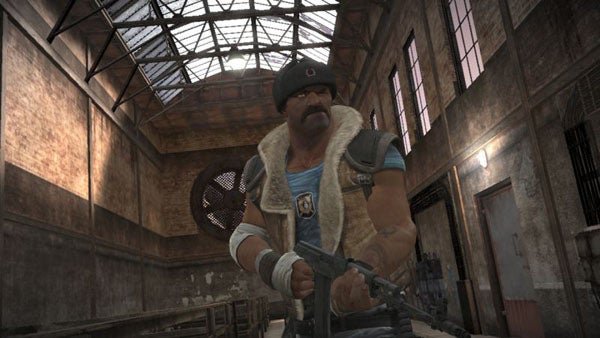 Coming to a final conclusion on this one is very difficult indeed. After playing the demo I wanted to love The Club – and in a way I do. It can be compulsive, interesting and challenging in the same way as a great old-school arcade shooter. On the other hand, I keep feeling that there’s something missing. Couldn’t it have the destructible environments and cool character moves of, say, Stranglehold? Couldn’t the levels be a bit more exciting and distinctive? Couldn’t it just have action replays and a touch more glamour? I reckon that for every 100 of you out there, about 30 will hate The Club, another 50 will like it. The remaining 20 will really connect with it and won’t rest until they have their name near the top of at least one leaderboard. In the end, I’ll have to leave it to you to mull it over, work out which you are, and vote with your wallet accordingly. The Club is an establishment that won’t accommodate everyone, but that’s OK. After all, it wouldn’t be right if just anyone could join.


A new and very interesting take on the 3D shooter, but the emphasis on score-building and an overall lack of glamour are guaranteed to put off a large section of the audience.