However England fare in the final Ashes test, the 2009 battle has done a fantastic job of dragging Cricket back into the public imagination, and that represents a golden opportunity for Codemasters. For around 15 years, on and off, the company has been pushing out cricket games under the Brian Lara banner, fending off the occasional challenge from EA and enjoying a modest level of success. If ever there was a time for a cricket video game to hit the big time it’s now, but it won’t be easy. As even EA has found, it’s one thing making a sports game that can appeal to that sport’s hardcore fanbase, and quite another to make one that will appeal to a wider audience. Now that audience might be ready for The Ashes 2009. The question is whether The Ashes 2009 ready for it? 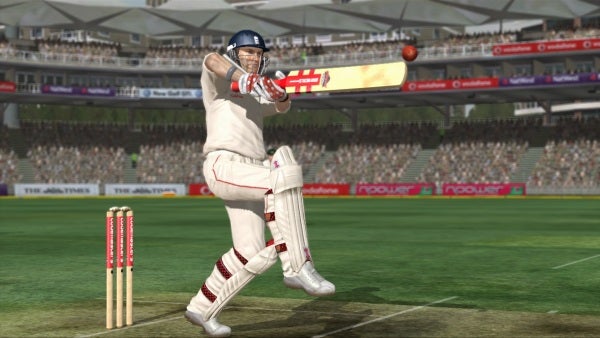 Up to a point, the answer is yes. Admittedly, there are some rough edges in both the Wii and Xbox 360 versions tested, ranging from unconvincing fielder animations to some truly shocking likenesses – you’d be more likely to find this Andrew Flintoff holding up a post office than bowling for England. If you know your cricket players, you’ll doubtless find other efforts here that aren’t so much uncanny valley as downright weird Grand Canyon. Yet for the most part the graphics just about pass muster, the presentation is slick and the commentary, from Jonathan Agnew, Ian Botham, Tony Greig, Shane Warne and Ian Bishop, does a fine job of rambling on and off topic in a vaguely convincing manner.


The game also benefits from all the replays, Hawkeye breakdowns, statistics and camera angles you’d expect from TV coverage (minus those gratuitous close-ups of girls in tight T-shirts and low cut tops you get when the cameramen start losing interest). The Ashes 2009 isn’t quite in the same league as a FIFA or NBA on the atmospherics front, but it’s definitely heading in the right direction. 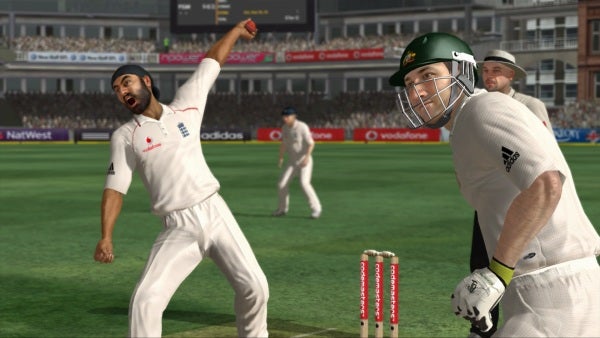 Points, too, for trying to make the game accessible to newcomers. Without a basic knowledge of cricket you won’t get too far in The Ashes 2009, but you don’t need anything more than the fundamentals. The high-end versions feature a good hour or so’s worth of tutorials from Messrs Warne and Botham, with onscreen prompts to take you through the controls, and good old Beefy dishing out advice on situations where a certain shot or style of delivery might reap rewards. It’s probably the best in-game coaching I’ve seen since NHL 09 last year. The Wii version gets more basic training, but then – in this case – that’s all that’s really needed.

Let’s be clear: on the high-end platforms, The Ashes 2009 requires mastery of some fairly complex controls. To bat, you’ll need to choose your stance with the left bumper and trigger, use the left stick to control your shot direction, then use one of three face buttons to choose a defensive, attacking or overhead shot, which you’ll then need to time perfectly before remembering to press Y to start your batsmen running. To bowl, you need to select a delivery using the left and right bumpers and the face buttons, then position the bounce with the left stick and hit a face button again to deliver, again with split-second timing. The tutorials do an excellent job of taking you through all this, but there’s quite a lot to get your head around straight off, and it will be an hour or so into the game before you really get the rhythm of the timing. 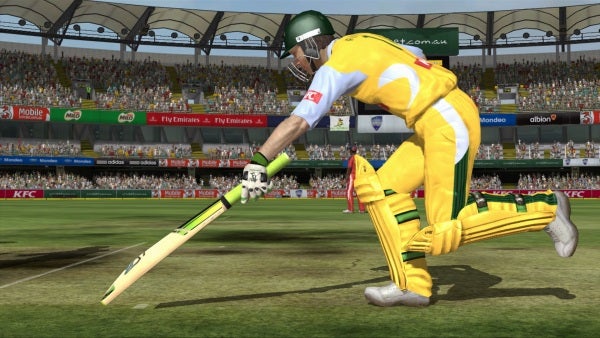 The upside of all this complexity is that you can’t fault The Ashes 2009 for lack of detail. Whether you want to spin, swing or just a bowl really fast, the game bends over backwards to let you have your way, and there’s a similar level of accuracy to the batting. Fielding is mostly automatic, but the game allows you to select different layouts with a quick flick of the left stick. What’s more the new mechanism for catching – a sort of slowmo quick-time event with a decreasing red to green to red circle indicating your chances – is brilliant, ensuring that a fielding player must keep on their toes in the gaps between deliveries. 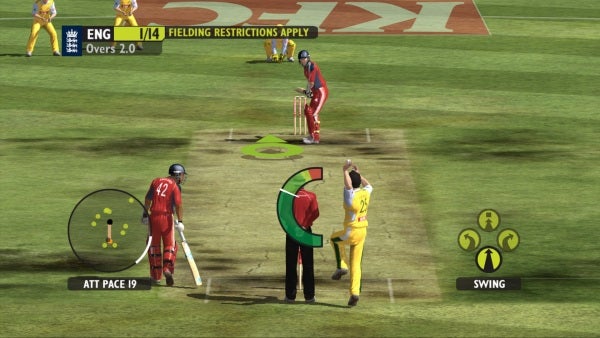 The Wii version is more instantly playable, but here there’s a slight disappointment in the controls. While the lack of MotionPlus support is understandable so soon after the peripheral’s release, the game doesn’t really go far enough in delivering a lifelike cricket feel using the regular Wii controls. While you can bowl properly if you like, a quick flick of the remote works just as well, and you actually adjust the speed of your delivery using the A and B buttons, not by flicking harder or faster. It’s a similar story with batting. There’s no sense that you’re affecting the angle or speed of the shot with the remote – it’s all a question of timing. This might make the game easier to pick up and more practical as a sofa-based activity, but you can’t help but feel that The Ashes 2009 is slightly missing the point of the whole Wii experience.

Still, you can’t fault either version for play modes or options. Even the more basic Wii version has a choice between quick exhibition matches, a series of challenging scenario missions and a full simulation of The Ashes, while the other versions go two better, losing the exhibition matches and scenario mode but adding online modes, one day cricket, full tests and 20 over matches to the line-up. And when we say a full simulation of The Ashes we mean it – all the games, in all the stadiums with each and every over. And if you don’t want to relive England’s glorious victory/ignominious defeat (delete as necessary), the game features all the main national teams and a generous selection of international stadiums, even if the odd name or detail has been tinkered with here and there. 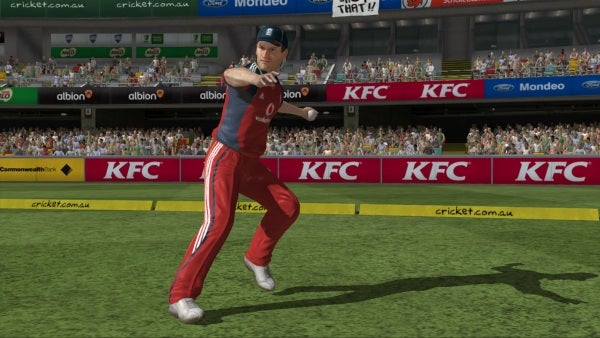 All in all, then, The Ashes 2009 seems like a generous and well-thought out cricketing package, ideally placed to capitalise on Ashes fever. Unfortunately, while it’s a good sports game, it’s not a great one. Let me explain the difference. A good sports games combines a reasonable simulation of the sport with enough detail and action to entertain existing fans – deserving the classic ‘if you like x, you’ll like this’ kind of cliche. A great sports game manages to reach out to the larger audience of those who have a passing interest in the sport, but probably don’t follow it religiously. In this category we might put a handful of the Tiger Woods/PGA Tour golf games, Virtua Tennis 1 to 3, one or two of the NBA and NBA Street games and maybe Madden NFL09. Oh, and let’s not forget Sensible Soccer or the last couple of FIFAs. The Ashes 2009 is good, but it’s not on the same level. 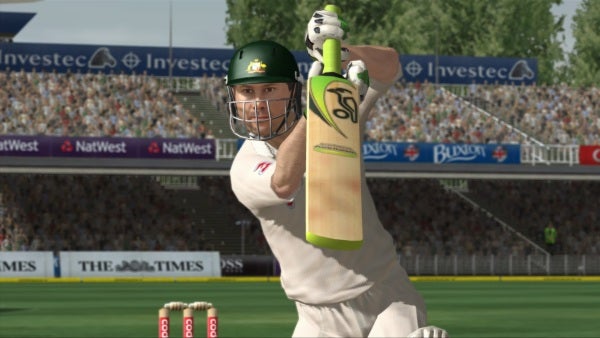 The biggest problem might just be down to cricket itself, and that’s the pacing. The shorter exhibition and one day matches give newbie players a quick fix of entertainment, but they’re not really meaty enough to sustain much interest in the long term. The Ashes and Test Match modes, meanwhile, are probably a little bit too meaty. In fact, when you’re starting out they can feel like they go on for an eternity.

The difficulty curve is part of the same problem. At first, and particularly in the Wii version, my innings spent as a fielder seemed to go on interminably, while innings spent as a batsman went by almost in an instant. Whatever my bowlers did with the ball, it seemed impossible to get the batsmen out whether bowled, caught or run out, while my batsmen seemed barely able to swing without getting caught. After a while, I started to forget about hitting the stumps, and just concentrated on setting up scenarios where I might get a catch. Once I did that, things fell into place and – suddenly – the opponent score line went from around 92 for 3 to 64 for 9. 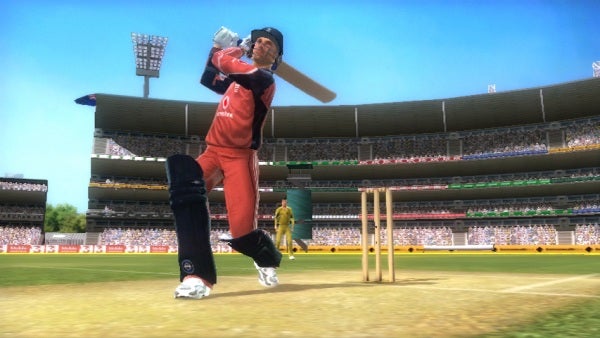 Even with three difficulty levels, The Ashes 2009 seems to sit on a knife edge between mercilessly difficult and stupidly easy on the fielding side, while batting can turn into a question of who can get the most fours and sneak the most singles without getting caught or run out. The AI stamps mercilessly on risky doubles, and you’ll soon note that while you can and will make timing mistakes that result in being bowled-out or LBW, the computer player is rarely – if ever – caught doing the same.


The Wii version, meanwhile, just feels too superficial to be satisfying. Without all the advanced control options of the Xbox 360 version, you’re left with a rather more basic test of timing and – as the overs wear on – you feel less like a player and more like a spectator. It’s entertaining enough for a quick match with a limited number of overs, but I can’t see anyone wanting to put days or weekends into playing it. 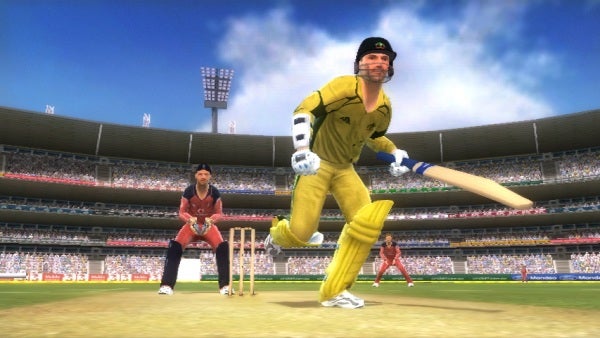 In short, we’re still in “if you like cricket, you’ll like…” territory here, and the Wii version isn’t going to change that. The 360/PS3/PC incarnations will, I think, be more appealing to the cricket fan, even if the scorelines depart from reality, and played with friends online or offline, there’s enough potential for a long, satisfying, tactical game. If, however, your interest in wide legs and mid-offs is likely to wane once the Ashes is over, then there are better ways you could invest your hard-earned cash. The Ashes 2009 is good, but it’s not quite as brilliant as this year’s series deserved.


Despite some graphical shortcomings, this is a fine cricket game for leather and willow enthusiasts. Sadly, it doesn’t quite have the wide-ranging appeal of a truly great sports game.