Teufel is known for delivering stunning high-end speaker systems at inexplicably low prices, but it’s always interesting to hear what the German company can do when it really lets its mullet down. So when we were asked to check out this £3k 5.1-channel system we simply couldn’t resist, particularly when we remembered how much we enjoyed listening to another of Teufel’s mega-pricey packages, the even more costly System 9 THX Ultra 2. 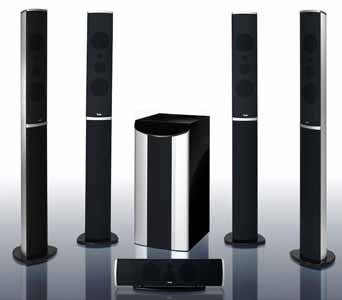 This system uses Teufel’s discontinued LT 7 system as its template, retaining the same front, centre and rears, but eschews the wireless rear speakers and digital subwoofer included in that much pricier package in favour of a regular sub and wired rears.


The fronts and rears in question are the M 720 FR, a column-style speaker that stands 1.4m tall and is mounted on a dark speckled grey granite base. The build quality of these things is phenomenal, thanks mainly to the use of 4mm thick aluminium, which gives them overwhelming strength and stability.

Although they’ll stand the test of time and completely justify the expense, we doubt they’ll be to everyone’s taste aesthetically. The brushed metal finish with screws dotted all the way down the sides makes them seem rather cold and industrial, lacking the elegance of wooden cabinets. But if your living space calls for a starker, modern speaker then these certainly fit the bill, and the black or maple piano gloss panel running down the back adds a bit of character.


Remove the speaker baffle and you’ll spot two 130mm woofers with carbon fibre reinforced sandwich cones (tasty!) that handle frequencies from 80 to 350Hz, and they’re joined by an 80mm cone driver for midrange sounds up to 1.8kHz and a 25mm fabric tweeter for high frequencies, both of which are placed in their own enclosure.

The M 720 C centre speaker is blessed with a similar spec in a bid to ensure homogeneity across the soundstage. It uses the same drivers as the columns (obviously rearranged to accommodate its horizontal configuration) and it’s also housed in an aluminium cabinet. It ships with a granite base for table-top mounting, which we imagine most people will favour, but if need be the centre can be affixed to the wall.


As mentioned, the use of a lower-specced subwoofer is what separates the LT 6 from the LT 7 system and is the reason why the LT 6 is much cheaper overall. The LT 7’s sub (M 7200 SW) came with built-in digital signal processing and a wider range of tweaks, but the Bassist M 7100 SW included here is a much simpler beast.

The sub matches the other speakers aesthetically, boasting a similarly distinctive combination of aluminium and gloss black, but the most pertinent fact is that it’s absolutely huge – try lifting this out the box on your own and you’ll need to ensure there’s a bed in A&E with your name on it. It’s 75cm tall, 47cm deep and weighs 38kg, so it’s a serious space-hog.


Let’s face it, though, if you’ve got this much to spend on a speaker system, chances are you’ve got a living (or cinema!) room big enough to house it. And if that’s the case, the titular THX Select certification makes it ideal for filling rooms up to 50m(sup)2(/sup). 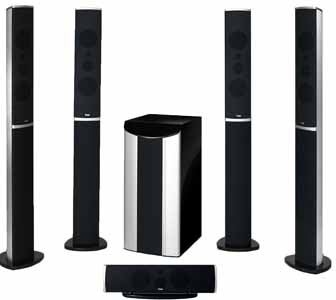 Inside are two 250mm long-stroke cones and a 700W(!) amplifier, while on the outside you’ll find all the usual bits ‘n’ bobs like cinch inputs, high-level (speaker) inputs/outputs and dials to control the phase setting, crossover frequency and volume. Also on the rear are a few reminders of the system’s THX Select certification, such as their recommended volume dial position (which is maximum, naturally), a switch position that bypasses the built-in crossover frequency control and a stereo output for daisy-chaining extra subs.


Rigging up the system is blissfully simple – no fiddly, inconvenient speaker connections to deal with, just large, easily accessible gold-plated binding posts located at the bottom of each column.

It should come as no real surprise that when fed a high-octane movie soundtrack like I Am Legend or Transformers on Blu-ray, the sound quality on offer is absolutely immense, boasting a blend of mind-boggling detail insight, staggering power and captivating surround imaging. 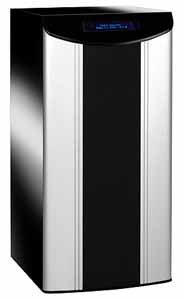 With big action set-pieces, the system effortlessly conveys a sense of scale and space that makes you lose yourself in the moment in a way that only the best speaker systems afford. There are no stand-outs and no weak links, which is testament to how well-matched these speakers are. With every channel pulling in the same direction, the result is a solid, harmonious soundstage.


And this is what makes the end battle in Transformers such a riveting listen. The Teufels blast out this whirlwind of ferocious effects, potent explosions and clearly-voiced dialogue with perfect poise and no distortion, and the interplay between the channels is consistently entertaining and utterly convincing. Topping (or should that be bottoming?) it all off is the superb sub, which musters bass tones so tight and deep your neighbours will never forgive you. Although, again, if you can afford such a system you can probably afford to separate your house a couple of miles from anything so vulgar as another property. 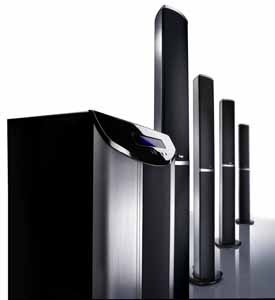 
We’ve tested a lot of impressive compact speaker systems lately, which do a terrific job for those with small living rooms and even smaller budgets. But when you want to replicate the jaw-dropping, eardrum-shattering experience you get from your local multiplex then sometimes only a properly awe-inspiring system like this will do. And on that score, the LT 6 THX Select delivers the goods, mustering a detail-rich, dynamic sound that’s also laced with elegance and finesse.


The only issue is the price, which many of you will no doubt will take one look at and close your browser in disgust, but when you consider that the sound and build quality is as good as some speaker systems we’ve heard that cost thousands of pounds more, then you might start to see this system in a whole new light.