We all love subwoofers for their earth-shaking bass capabilities, but let’s face it – they can be a right pain to integrate into your living room. Not only do they demand to be placed in the optimum position in the room, but without careful Feng Shui that big black box can end up sticking out like a sore thumb.


But with a (stereo) typical slice of German practicality, Teufel has hit upon a great idea for its latest home cinema speaker system – why not incorporate the sub into the front speaker column? In fact, why not shove a sub in BOTH front speakers and really keep the neighbours on their toes? 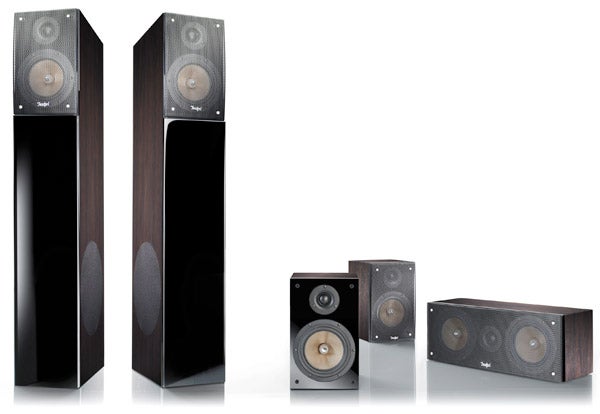 The result is the Theater 3 Hybrid, a surprisingly affordable 5.2 speaker system with a 150W subwoofer amplifier built into each of the floor-standing M 320 F front speakers, allowing each column to act as a passive stereo speaker and active sub simultaneously.


Teufel reckons that the use of two subwoofers improves the bass response of your system, and it’s an idea that the company has already used on its more expensive Theater 4 and Theater 5 Hybrid systems – but the Theater 3 brings the technology to a lower price point and the smaller speakers are easier to integrate into your home.


The M 320 F front columns stand at just over waist height (940mm) and like all the other Teufel speakers we’ve handled recently they’re impeccably built and reassuringly heavy – you certainly get a lot of speaker for your money. Both are styled in a very alluring gloss black finish, which covers two thirds of the front panel, while the top third houses the speaker that uses a 130mm fibreglass woofer and 25mm neodymium tweeter. On the side is a 200mm bass reflex subwoofer, which is separated from the other drivers by an acoustic partition. 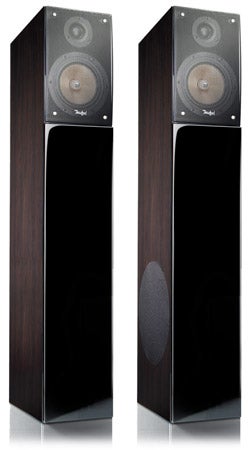 To get the full benefit of the active subwoofer in each speaker, they both need to be plugged into the mains – good luck keeping your electricity bills down – but because they can also be used as a passive stereo pair you don’t necessarily need to plug them in when used with a stereo amp.


There’s quite a lot going on round the back of each speaker. There are switches to change between ‘Stereo Amp’ and ‘AV Receiver’ modes, set the bass level at either -3dB, 0 or +3dB and choose between ‘On’ and ‘Auto’ power settings. As well as a pair of gold-plated binding posts, there’s a cinch pre-amp input, which lets you connect the sub output from your receiver. It does however mean that you’ll need a Y adaptor to feed both subs at the same time (unless your amp has two sub pre-outs of course).

The system also includes the M 320 C centre speaker and the M 320 R rear speakers. The M 320 C comes with the same gloss black front panel and wood veneer cabinet as the fronts and features two 130mm fibreglass woofers and a 25mm neodymium tweeter. It can handle up to 160W, which means dialogue shouldn’t be overpowered by the other channels when listening at loud volumes.


The M 320 R bookshelf-style rears feature the same finish and woofer/tweeter combo as the fronts, and they can be mounted on Teufel’s M 110 P stands. Maximum power handling is rated at a reasonable 80W.

In action the Theater 3 system delivers a knockout performance on the whole, getting stuck into the thrills and spills of ”Cloverfield” on Blu-ray with plenty of zeal. Effects from the rear and front channels, such as Army gunfire or the panicked voices of the fleeing crowds, are crisp and decisive thanks to the clean, sharp treble, and they’re fired into the room at a fast pace. It all adds up to an open, detailed and dynamic soundstage that effortlessly amplifies the movie’s sense of excitement.


Dialogue is smooth and forthright from the centre channel, and its wide dispersion means that it sounds just as good even when you’re not directly in its line of fire. The dual sub arrangement pumps plenty of deep bass rumble into the room as the monster stomps around the Manhattan streets. The subs cross over to the fronts seamlessly, which makes for a solid, cohesive sound, but despite this we’re not completely blown away by their performance. 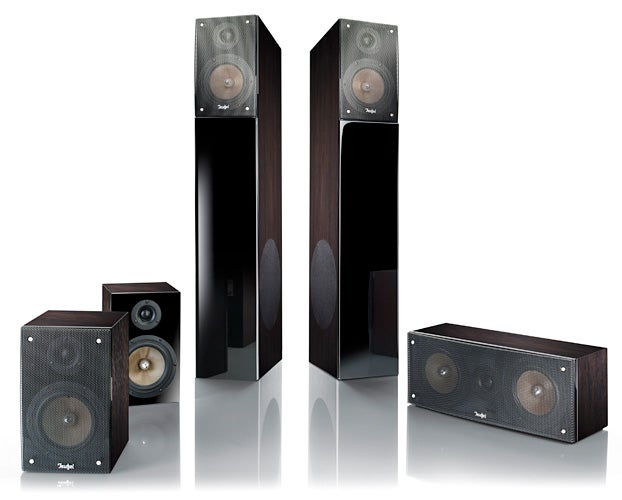 Although the volume and depth of their bass output is impressive, the subs lack the agility of a decent dedicated subwoofer, employing a sledgehammer approach when a more precise and punchy bass sound would have served the action better. Perhaps we’re being picky but it’s definitely worth checking out before you buy to see if you like this sort of brash bass delivery.


In all other respects though the performance is hugely satisfying, particularly stereo music playback with the sub amps switched off. And it’s here that we hear the worth of those integrated subs, as they lend extra bottom-end solidity to musical genres that demand it, such as rock and dance – U2’s ”Get On Your Boots”, for example, is full-bodied and propelled along at a rapid, rhythmic pace with bags of energy and detail. But with the fragile jazz of Miles Davis’ ”Kind Of Blue” CD, it conveys the gentler sounds with admirable skill.


The Theater 3 Hybrid is yet another impressive addition to the Teufel speaker family, delivering an enthralling sonic experience with home cinema fare and handling music with the smoothness and expertise of a much pricier system. As for the integrated subs, their space-saving benefits are an obvious bonus, and although they lack the punch and dexterity of a dedicated bass box, their sheer volume and depth should still be enough to boost your enjoyment of action-packed movie tracks.