Despite Teufel’s reputation for good value, some of its speaker systems are astronomically expensive. Take the LT6 THX Select system for example – its sound quality is nothing short of staggering and you certainly get a lot of speaker for your money, but with a price tag pushing £3k only city bankers and Simon Cowell need apply.


So with that in mind, we’re taking a look at a new system that might appeal to those on a more modest budget. At just over £800, the Theatre 200 is hardly cheap but more realistically priced than the LT6 or System 9 – and once you open up the boxes you might think you’ve been undercharged. All of the speakers included in the Theater 200 system boast incredible build quality, the sort you rarely find at this price point. 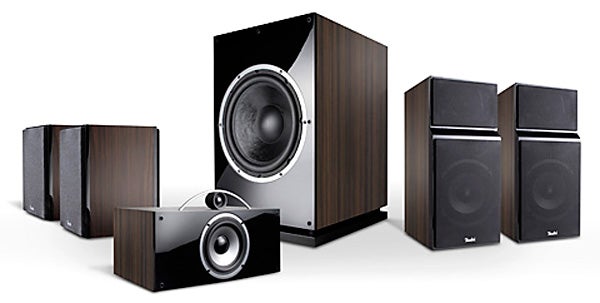 Theater 200 is a fourth-generation descendant of Teufel’s Theater 2, a ‘legendary’ system from the mid-90s on which the company built its reputation. The package includes a pair of T 200 F front speakers, an acoustically-enclosed two-way design. Inside is a 170mm coated cellulose fibre woofer and a 25mm large tissue dome tweeter, driven by a neodymium magnet and a voice coil chilled in ferrofluid. Nice. 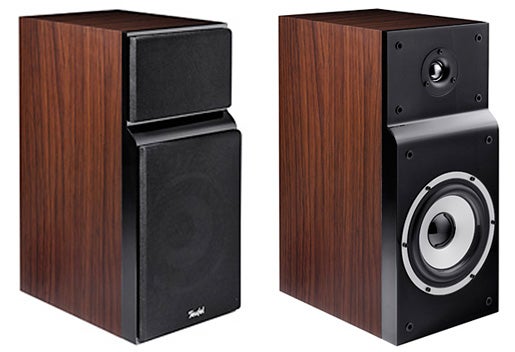 
The unusual two-tiered design of the cabinets not only makes them look distinctive, but also serves a practical purpose, compensating for the run-time differences between the drivers. The whole system comes in a ‘classic’ dark walnut finish, which might look at home in your Gran’s living room but could be a bit musty for more modern tastes. Remove the speaker baffles and you’ll uncover a more fashionable gloss black finish. 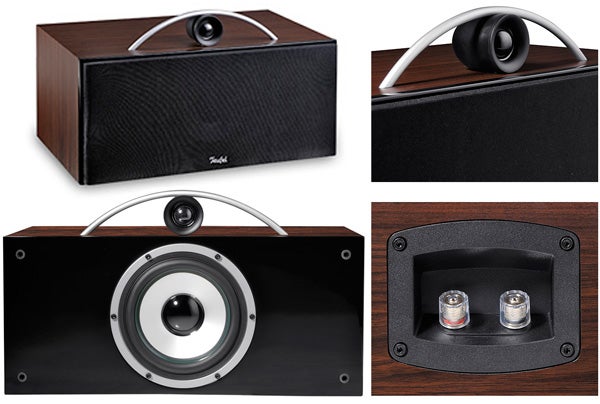 
Things get even more aesthetically interesting with the T 200 C centre speaker, which has its tweeter mounted on top of the cabinet under a silver arch, for delivering clear, unhindered speech reproduction. Its drivers are the same as the fronts, which also share this ‘staggered’ tweeter arrangement inside their cabinets, all of which should ensure a homogeneous sound across the front soundstage. The power handling figure given for both the fronts and centre is 140W.


Rear channel duties are handled by a pair of T 100 D speakers. These are dipoles, which means they emit sound from drivers on both sides to achieve a more diffuse surround effect when wall mounted (just like in the cinema). The effects are reflected along the walls and off the ceiling, making it harder to tell where they’re coming from. However, if you’re not mounting them on the wall then the two-way effect can be switched off, essentially turning them into an extra pair of T 100 Fs.

Completing the set is the T 2000 SW sub, which is an absolute monster, not only in terms of size but also power – it packs a 250W class D amplifier, reproduces frequencies from 200Hz down to 28Hz and can comfortably fill rooms of up to 50m2. But boy is it big – this thing stands 60cm tall and weighs 25kg, so you might want to give Geoff Capes a call when it’s time to install.


On the back are more controls than you can shake a stick at. Three dials let you adjust volume, crossover and phase, plus you’ll find cinch inputs and outputs and a switch to select Full Range or Low Pass mode (the latter should be used if your AV receiver lacks bass management). The speakers are a doddle to rig up thanks to the inclusion of large gold-plated binding posts. 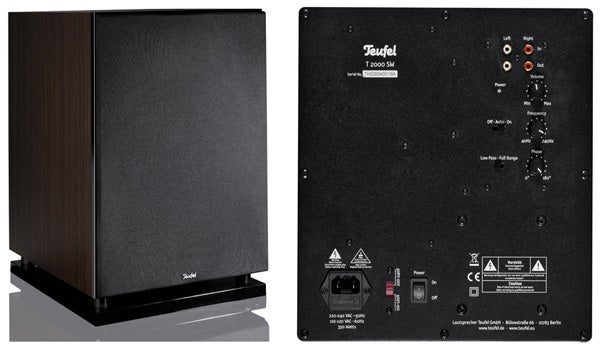 
To test their performance, we fired up ”Iron Man” on Blu-ray and skipped to chapter 5, where Tony Stark busts free from the cave in the prototype suit. The action is conveyed with tireless energy, immense power and compelling detail. All six speakers are seamlessly integrated from front to back, creating a breathtakingly immersive soundstage – bullets fire at you from all angles and whip between the speakers with amazing precision, with nary a trace of harshness even in the sharpest sounds. There are times when it could do with a little more drive and attack, and as a result it’s not as relentlessly thrilling as the LT6 system, but it’s not far off.


The dipole rears are a revelation – the back of the room is a wall of sound, with effects shifting smoothly from left to right, but they place individual sounds accurately when needed. The use of the same drivers across the soundstage means the rears can tease out delicate surround detail as competently as the fronts – light ripples of applause at the press conference and the chatter of crowds at parties emerge with delightful crispness. 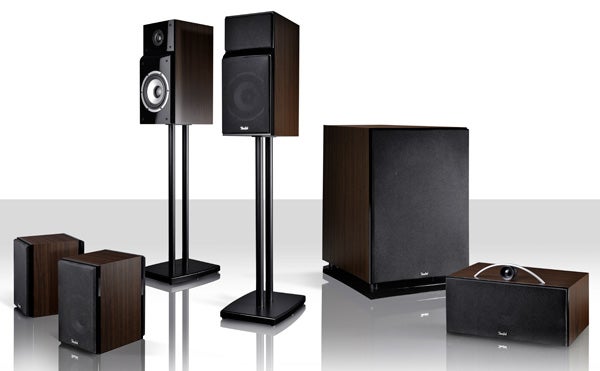 
What’s also impressive is how effortlessly the Theater 200 fills a room. The immensely powerful sound gives ”Iron Man’s” high-octane set pieces the sense of scale they deserve, to a greater extent than most of the slightly cheaper systems we’ve auditioned recently. Much of the credit for this should go to the subwoofer, which is ridiculously powerful but taut and punchy at the same time. It takes some careful tweaking to stop it sounding too prominent, but find the right balance and you get a meaty, cohesive performance.


Other plus points include the way the centre channel conveys dialogue clearly and with plenty of body, and its ability to pick out fine background detail during quiet scenes. And despite its home cinema leanings, the Theater 200 also turns in a beautiful performance with music, injecting it with warmth, detail and precise timing.


The success of the Theater 200 goes to show that you don’t have to be a millionaire to get a taste of Teufel at the top of its game. The system delivers the sort of powerful, large-scale sound that you have no right to expect for under a grand, and if you like the quirky styling and have room for the unfeasibly large sub, then this is £800 well spent.