Teufel might not be a name you’re familiar with, but the German company has been selling speakers since 1979 and has enjoyed enormous success in its native homeland. But now the company has started selling its products to the UK through its new English website, and showed off its complete range to the press at a recent preview event in London.


Among the many products on show were all-in-one home cinema systems, PC speaker kits, serious audiophile THX systems, iPod docks and stereo speakers, but on test here is the Impaq 500, a 2.1-channel all-in-one system that comes with an integrated DVD/CD player and amplifier unit, two IP 500 F column speakers and the IP 500 SW subwoofer. It’s the follow-up to the company’s debut 2.1 system, the Impaq 400, and the idea behind it is to deliver a powerful home cinema experience without taking up loads of space – summed up by the mantra ‘maximum home cinema, minimum space requirements’. 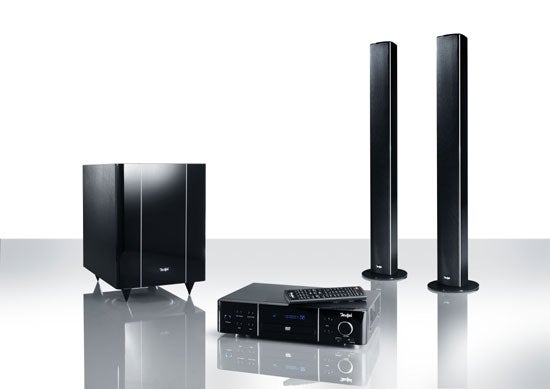 Stylish design is another important part of Teufel’s ethos, and on that score the Impaq 500 doesn’t disappoint. The main unit is handsomely crafted and unashamedly chunky, which provides a welcome alternative to the hordes of slimline units doing the rounds. It’s finished in gloss black, and the fascia is fitted with a sparse selection of big chunky buttons, a tasteful silver-trimmed volume dial and a centrally placed disc tray. Just above the tray, an easy-to-read illuminated display shows the elapsed time and track/chapter number, while on the bottom right corner you’ll find a USB port and a headphone output.


On the rear panel is a very generous array of sockets, including HDMI, component, S-Video, composite and SCART outputs, plus optical digital, coaxial digital and analogue stereo audio outputs. External audio sources are well catered for too, with three analogue stereo inputs plus optical and coaxial digital inputs. Rounding up the selection are aerial inputs for the built-in FM/AM radio tuners and three pairs of speaker binding posts, which makes a refreshing change from the inferior springclip terminals found on the majority of home cinema systems.


It only takes a quick feel of the speakers to realise where your money’s going. The columns are robust, weighty and elegant, sporting the same gloss black finish as the main unit. The subwoofer also boasts classy looks and large rubber spikes to minimise vibration, but its enormous size rather contradicts the message about not taking up much space. It’s not powered, so the only thing you’ll find on the back is a pair of binding posts.

The spec sheet makes for good reading, and perhaps the most important thing on it is the 450W power output generated by three digital power amps. It boasts on-board decoding for Dolby Digital and DTS, while Dolby Virtual Speaker is on hand to generate virtual rear channels from two speakers using ‘psychoacoustic room modelling procedures’, a feat that it hasn’t convincingly achieved on other systems. You’ll also find a selection of EQ modes with exciting names like Rock, Pop and Jazz.


You shouldn’t have trouble playing your media library as it supports a healthy range of formats, including most recordable DVDs and CDs, DivX, MP3, WMA and hi-res JPEGs. MP3 and WMA files can also be played back from a memory device connected to the USB port. 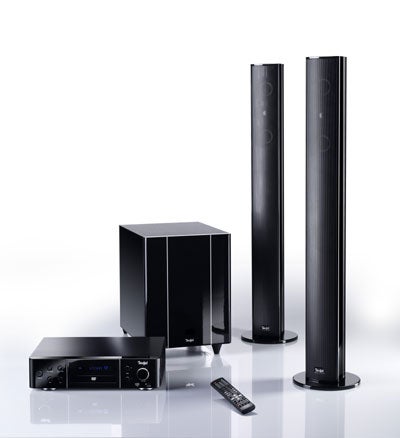 When connected to your TV’s HDMI input, you can upscale the video signals to 1080i and 720p, as well as the more unusual output resolutions of 1024 x 768 and 1366 x 768, which might come in handy for owners of older HD Ready displays, but it doesn’t make up for the fact that a system at this price really should offer 1080p upscaling.


In operation the Impaq 500 is generally agreeable but it’s hardly the cutting-edge experience you may be expecting for the money. The onscreen menu architecture is clear and the displays are colourful, but it all looks a bit dated. And although the remote’s button arrangement is fine, it looks tawdry and the buttons themselves are sticky, failing to register a press on a few occasions.


Onto performance and the first thing we noticed after loading up Gladiator is how effortlessly powerful the system is. At just over half its maximum setting it delivers a seriously meaty movie experience that easily fills a reasonably-sized room, giving you a bit of leeway should you wish to crank it up further and really wake the neighbours. 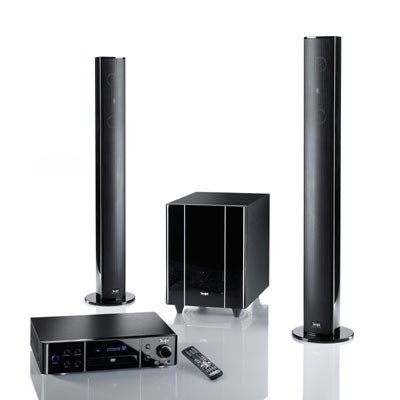 The sound quality is breathtaking throughout, best summed up by the movie’s opening battle between the Romans and the Germanic hordes. Excellent treble reproduction makes arrows fizz loudly as they fly through the air, clanking weapons sound realistic and resonant but not tinny or bright, and Russell Crowe’s barked orders cut though the melee with ease. The system also blasts out punchy, muscular bass that lends a solid foundation to the frenetic action, plus the perfectly judged crossovers make the bottom end fuse seamlessly with the midrange.


Naturally our next port of call was the coliseum, and the Impaq 500 handles the fierce combat scenes with the sort of authority and drive that makes for a thrilling listen. But also remarkable is its ability to tease out subtleties in the soundtrack and reproduce them with almost surgical precision.

Less impressive is its ability to mimic the effect of surround speakers through its stereo pair, with Dolby Virtual Speaker failing to do justice to Gladiator’s normally enveloping 5.1-channel soundtrack. Although the front soundstage is wide and dialogue is convincingly relocated into the space between the two speakers, the rear information doesn’t get behind you in the way real rear surround speakers do. It’s a criticism we’ve made countless times and once again it reinforces the fact that if you want a true home cinema experience then a 2.1 system isn’t the way to go.


The system is terrific with music, offering a crisp, punchy presentation of Dave Grusin’s Mountain Dance CD. It tenaciously keeps pace with the varying jazz-funk rhythms and makes the dancing piano notes sound warm and colourful – you can hear Teufel’s audio expertise oozing from the speakers. 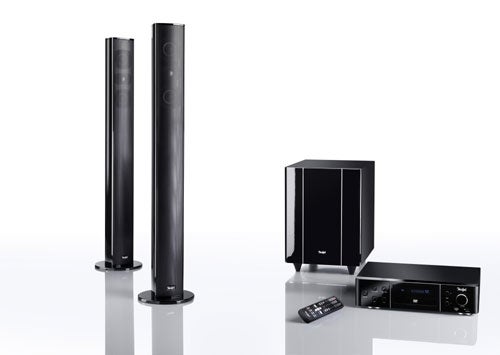 Picture quality from the HDMI output is solid but not world-beating – colours are smooth and convincing, deep black levels give the picture real punch and block and mosquito noise are nowhere to be seen, but there’s a slight hint of softness that prevents it reaching the levels of clarity that you get from a good standalone player. Playing back a 1080i image on a 1080p set isn’t ideal either, but for most tastes the Impaq 500’s pictures will be more than acceptable.


The Impaq 500 is comparatively expensive for a 2.1-channel system, and with a lack of 1080p upscaling and a dated operating system it doesn’t always justify its hefty price tag. But the system’s saving grace is its phenomenal sound quality, which is effortlessly powerful and wonderfully detailed, although don’t expect miracles from its virtual surround technology. The build quality and styling is also a cut above many 2.1 systems, making this a very promising start from a company that we hope to hear a lot more from in the future.