Hear the phrase ‘all-in-one system’ and it conjures up thoughts of cheapo one-box packages with hollow speakers, passive subs and so-so sound quality. But with the Impaq 4000, Teufel is looking to banish such thoughts to the back of your mind with its typically luxurious build quality and the sort of classy sound performance you get from a decent separates system.


Inevitably that extra quality adds plenty of pounds to the price tag, but if you’ve always wanted a Teufel system, and hate the thought of buying components individually, then it could be money well spent. 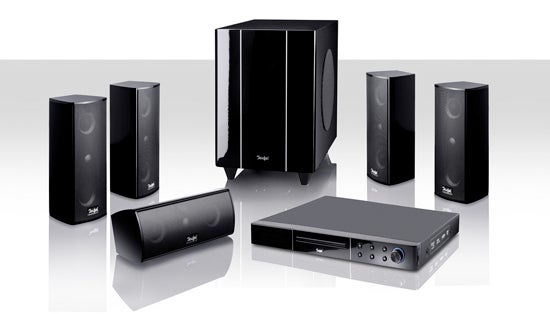 The Impaq 4000 is one of two new 5.1-channel systems in Teufel’s range, sitting alongside the step-up Impaq 6000 (£1,250), which includes column speakers instead of the 4000’s satellites. The centrepiece of the package is the IP 6000 DP ‘preceiver’, which features a built-in DVD player, preamplifier, surround sound decoder and FM/AM radio tuner. This unit is only available with the Impaq 4000 and 6000, so anyone hoping to pair it with a different speaker system is out of luck.


It’s amazingly slim for a unit of this type and is drop-dead gorgeous, fusing the eye-catching sleekness of a Samsung system with the esoteric allure of Loewe or Primare. The casing is rock-solid and finished in high-gloss black lacquer, while the fascia is peppered with just a few buttons and a blue-lit volume dial. 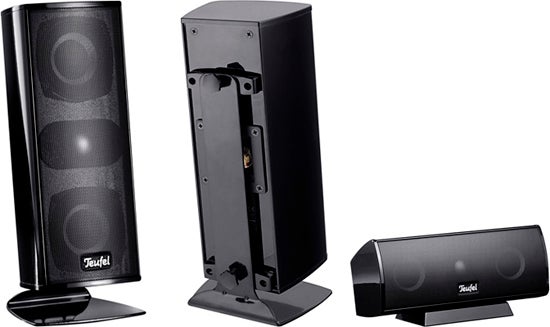 The rest of the system is styled with similar panache. You get four identical speakers for the front and rear channels (IP 4000 FR), all of which are dressed in the same high-gloss finish and boast beautifully built aluminium cabinets. You can wall mount them, but in the box you’ll find table feet that look great when attached to the bottom. Their two 80mm midrange drivers and 25mm tweeters are positioned in a D’Appolito arrangement, just like the centre channel which is exactly the same but mounted horizontally.


Completing the speaker line-up is the all-important IP 4000/6 SW subwoofer, which also handles amplification for the entire system. Inside is a six-channel amp that supplies 5 x 50W to the satellites and keeps back 150W for itself. It’s by no means small but doesn’t let the side down aesthetically – the gloss-black finish and silver stripes are a fetching combo and it’s lifted off the floor by four rubber spikes. Like all of the components, this sub is exclusive to the Impaq 4000 and 6000 systems.

Turning back to the preceiver unit, it’s equipped with a fairly generous range of features, but the big question is why Teufel didn’t include a Blu-ray player. It’s the least you should expect when spending this much money on a home cinema system and its absence makes the Impaq 4000 feel a bit behind the times.


But as DVD players go, it’s pretty decent. SD discs can be upscaled to HD resolution on compatible TVs via the HDMI socket, with a choice of 1080p, 1080i and 720p output. It also plays MP3, WMA and DivX files from DVD, CD or USB stick (via the side-mounted port) and spins most recordable DVD formats. 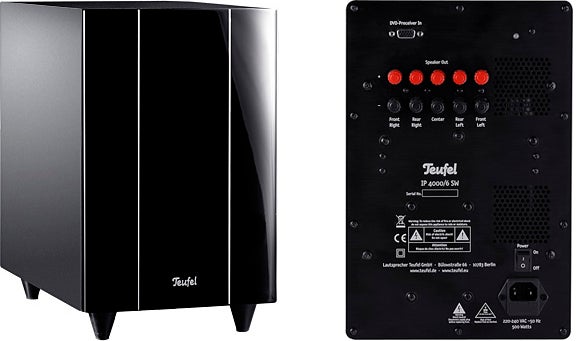 You also get a copious amount of other sockets on the back, including two HDMI inputs that let you pass other hi-def kit to a single input on your TV, plus component, S-video and composite input and output. For audio, you get optical and coaxial inputs (two of each), optical and coaxial digital output and analogue stereo input/output. An audio minijack is provided for MP3 players and you can add an optional Teufel iPod dock – all of which makes the Teufel a top-notch hub for you entire home entertainment system.


To complement its Dolby Digital and DTS decoding, it’s equipped with a modest array of audio processing modes, including Dolby Pro Logic IIx (with modes for music, movies and games), Dolby Headphone and basic bass management. You can also adjust the levels of bass and treble using dedicated controls on the remote, and there’s a range of EQ modes that adapt the sound to suit different musical styles. 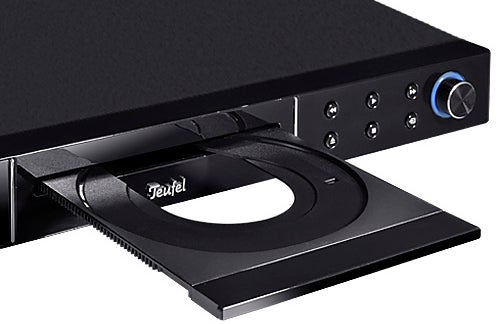 You shouldn’t have any trouble installing the Impaq 4000. All the cables you need are found in the box, and thankfully each speaker sports gold-plated binding posts instead of the much-dreaded spring-clips. The main unit and subwoofer are connected using a fairly short 15-pin connector, which limits where it can be placed. That they’re not connected wirelessly is a shame but not a deal-breaker.


On-screen, Teufel keeps things simple with a pleasant, if rudimentary, setup menu. All the essentials are covered and the layout is logical, plus the cursor moves around without hesitation. We love the remote, which boasts a rubberised back, a brushed black finish on top and big chunky buttons. It crams a lot of keys into a tight space without feeling cluttered and the labelling is helpful, although the playback buttons are far too low for comfort.


In terms of performance, the Impaq 4000 is an exceptional system. It’s a million miles away from the bright and booming sound of many systems, conveying the electrifying DTS soundtrack of our Apocalypto DVD with power, control and subtlety.

Its pedigree is apparent from the very first scenes of the movie. As the camera zooms through the rainforest undergrowth, the delicate sounds of wildlife and rustling leaves fill every inch of the soundstage, creating an immersive, atmospheric experience. The sensitivity of these satellites ensures that even the gentlest effects are voiced with impeccable clarity.


And as the tranquillity is broken by the petrified boar, the dynamic shift is swift and impactful – pounding drums rumble from the front channels with incredible force and the ensuing chase is absolutely thrilling. There’s no harshness or thinness in the treble, midrange sounds are full bodied and bass is taut and fulsome – qualities you simply won’t get from a sub-£500 system, and a compelling reminder why you shouldn’t skimp when it comes to home cinema sound.

Other scenes like the dramatic raid on the village and Jaguar Paw’s relentless chase through the rainforest also highlight the Teufel’s virtues – superb detail reproduction, tight, punchy bass, expansive rear effects and prominent dialogue from the superb centre channel. It can’t quite match the wallpaper stripping power and detail insight of our reference separates system (an Onkyo TX-NR906 and Teufel Theater 3 speakers) but as all-in-one systems go this is a formidable sonic performance.


Teufel isn’t known for its video prowess, but given the quality of these upscaled DVD pictures maybe it should be. At 1080p and 1080i, the IP 6000 DP produces crisp and detailed images, which also boast the sort of richness and filmic depth that will satisfy videophiles whose displays demand only the best-quality signals. The screen is packed with deep, radiant colours, and its ability to render the numerous shades of green and nail the Mayans’ bronzed skin tones demonstrates its versatility and subtlety. What’s more, it’s all conveyed without a hint of block/mosquito noise or stepping on diagonal edges.

We also checked out its digital media skills and MP3, WMA, JPEG, DivX and XviD files are handled with no problems, although hi-res JPEGs are reproduced in a much lower resolution and it didn’t play our WMV test files despite Teufel’s website claiming that it would.


The Teufel Impaq 4000 might be expensive, but after testing out a few movies you’ll begin to understand why. The sound quality is a cut above what we’ve come to expect from cheaper all-in-one systems, while its looks and build quality are sensational. That said, we think it’s absolutely criminal that Teufel left out Blu-ray playback in favour of DVD, even taking the quality of its upscaling into consideration – hopefully Teufel will see sense and include a hi-def player with the next generation of this system.