Teufel may be a relatively new name in the UK, but the German speaker specialist is already building a strong reputation for itself. In the Home cinema arena, Teufel has proved that it can compete with the best whether in the value sector or the high end, with its Motiv 3 and System 9 THX Ultra systems respectively. But those sets require a separate amplifier or receiver to drive them, and not everyone wants to go to that extra expense. 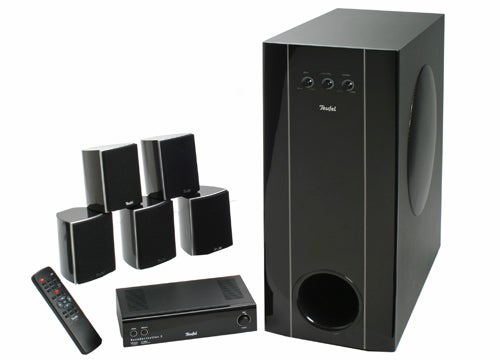 If you’re looking for great surround sound for your games and movies, but haven’t got a huge wad of cash burning a hole in your pocket, Teufel has you covered. The Concept E 400s are the latest addition to Teufel’s Multimedia range, sitting at the top of that particular tree. And even though the price of £283 might not seem that cheap to some, the Concept E 400s produce sound that’s far more impressive than that price suggests. 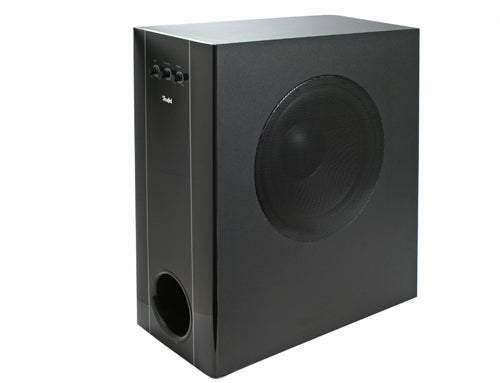 These speakers produce big sound, far bigger in fact than I would have expected from an all in one system. The key to that big sound is the truly massive subwoofer that’s the cornerstone of the whole setup. I’ve seen bigger subwoofers, but not as part of a multimedia system like this, and certainly not at this price point. Of course it’s not just a subwoofer, since that big black box also houses the amplification for all the satellites, as well as for the sub itself.


If you want numbers, the CE 400 SW subwoofer has a 500W amplifier hiding inside it, but 250W of that power is dedicated to driving the sub, leaving 50W per channel for each of the satellite speakers. That’s a pretty generous spread of power, and the decision to funnel half of it to the low frequency channel pays real benefits when you’re watching an explosive action scene, or playing a through a particularly hairy fire-fight in say, Halo 3 or Gears of War 2. 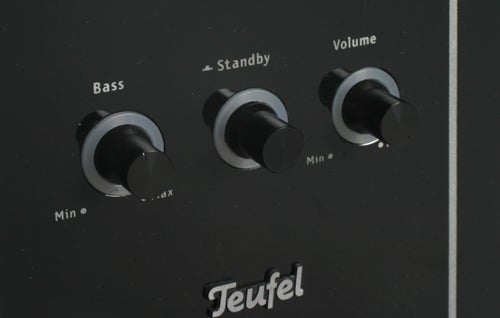 As is usually the case with Teufel speakers, they look good as well as sounding good. The subwoofer is finished in glossy black, which will no doubt complement the majority of high definition TVs that it’s likely to share a room with. There are, what looks like, three dials on the front of the sub, although the centre one is actually just a button that toggles between standby and on. The right dial is the master volume for the whole set, while the left dial controls the amount of bass, which can be set from a mild atmospheric rumble, to window shaking earthquake levels!

At the rear of the CE 400 SW you’ll find five pairs of spring clips for the satellite speakers – binding posts are a bit much to ask for at this price point. Next to the spring clips are six analogue phono inputs for pumping the 5.1-channel signal to the amplifier. Throw in the power socket, and that’s all the connections covered. So, you’re probably wondering why Teufel would create a speaker set like this with only one source input. The answer is simple, Teufel is expecting customers to pair the Concept E 400s with one of its Decoderstations. 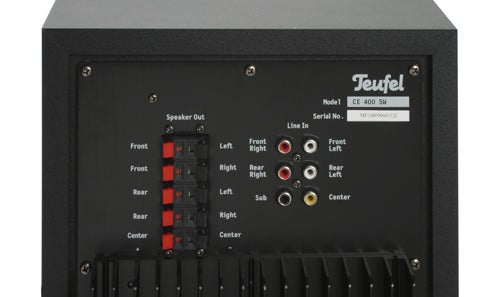 Teufel sent the new Decoderstation 5 along with the Concept E 400s, which will set you back an additional £154, although if you didn’t need quite so many inputs, you could go for the older Decoderstation 3 for £111 instead. The Decoderstations bring two benefits to Tuefel’s multimedia speaker sets. First, they allow you to connect multiple sources, and secondly, they have integrated Dolby Digital and DTS decoders, allowing you to output a pure digital bitstream from your source. There’s also in-built Dolby Pro Logic decoding, so you can get a surround sound from analogue stereo sources too.

The Decoderstation 5 has four digital inputs – two optical and two coaxial. You also get three analogue stereo inputs and one full set of 5.1-channel analogue inputs. This last set is particularly important if you’re planning on hooking up a Blu-ray player. Since the Decoderstation 5 doesn’t support the latest high definition codecs like Dolby TrueHD and DTS HD Master Audio, the answer would be to buy a player that decodes these new codecs onboard, and then outputs the decoded audio via six analogue channels. As long as your Blu-ray player has that ability, there’s no reason why the Concept E 400s couldn’t make the most of your Blu-ray soundtracks.

There’s an infrared remote supplied with the Decoderstation 5, allowing you to switch sources and adjust the volume from the comfort of your chair/sofa. Unfortunately there’s no way to remotely switch the subwoofer on, so you’re still going to have to get up from your chair to get things going, although it will power itself off if left idle for a while.

Teufel doesn’t supply any cables or interconnects with the Concept E 400 set, which is no bad thing in my mind. The vast majority of sub-powered multimedia speakers ship with poor speaker wire, already cut to lengths, which may or may not be suitable for your particular use. If you’re worried about the extra cost, don’t be, since the AC 2015 cable set, which includes a full set of 5.1-channel interconnects and 20 metres of speaker cable, will cost you around £10. 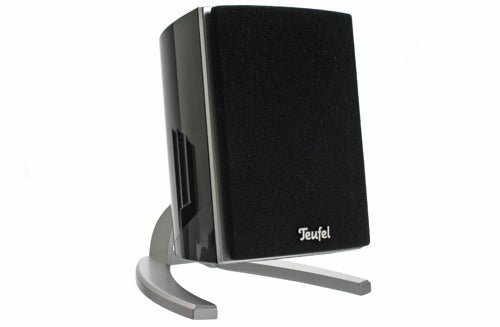 When it comes to sound quality, these speakers don’t disappoint. Considering that all the amplification is sitting in the subwoofer, the handling of subtle effects is surprisingly good. With multimedia sets I expect there to be a leaning towards big action set pieces, whether in movies or games, but the Concept E 400s deal with quiet scenes with equal aplomb. The centre dialogue channel is particularly impressive, locking your focus to the screen, with little, if any perceptible dialogue bleed into the left and right channels. 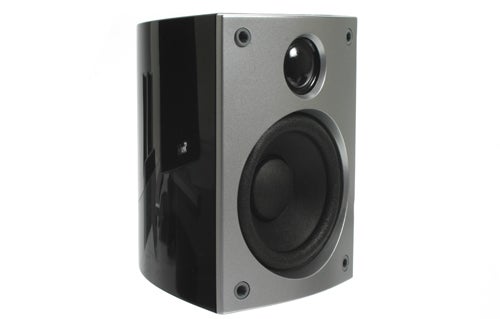 But when the gloves come off, and those big action scenes come around, the Concept E 400s really show what they’re made of. The Dolby Digital soundtrack on Transformers was a joy to hear on these speakers. The soundstage was beautifully rendered with all the positional effects, especially on the rear surrounds, enveloping the viewer. But it’s when the action hots up, and that huge subwoofer fires up that this set really comes into its own – the sheer power will make any blockbuster that bit more immersive. 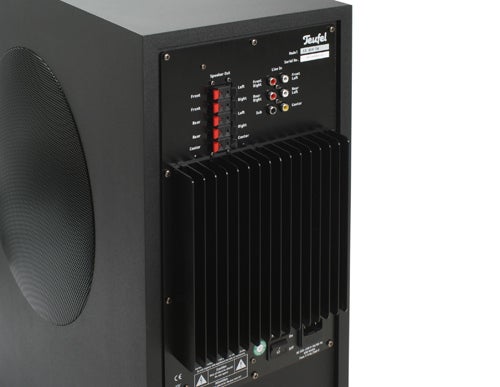 The Concept E 400s are no less impressive when they turn their hand to gaming either. Hooking up an Xbox 360 and firing up Halo 3 proved that point. The real time Dolby Digital soundtracks on modern console games cry out for a high quality surround sound setup, and the Concept E 400s are definitely up to the job. It’s arguably even more important to have an immersive and accurate soundstage when playing a game than it is when watching a movie. Being able to hear where your enemies are, or what direction shots are coming from just adds another dimension to proceedings.

So, when you add it all up, the Concept E 400s, Decoderstation 5 and all your cables and interconnects are probably going to set you back around the £450 mark, which isn’t exactly small change. But when you consider what you’re getting for that money, and how much a comparable receiver and 5.1-channel speaker set would cost, this setup offers decent value for money.


If you’ve already got a high definition TV, a games console, a PC and a Blu-ray player, you’re probably already thinking about a surround sound system to get the most out of your kit. And if you are in that position, the Concept E 400s and Decoderstation 5 will make the perfect addition.


I’m not going to pretend that these speakers are cheap, but considering that Teufel is a serious loudspeaker manufacturer, I wouldn’t call them expensive either. Ultimately, if you’re looking for an active surround sound speaker set, the Concept E 400s should be high on your list.