It’s immediately apparent that Teufel is doing something different with the Concept B 200 USB speakers. They’re priced like a decent set of 2.1-channel speakers, but lack a dedicated subwoofer which might make you wonder what that £184 is buying. But as the System 5 THX Select 2 speaker set showed, Teufel doesn’t mess around when it comes to providing excellent audio equipment. 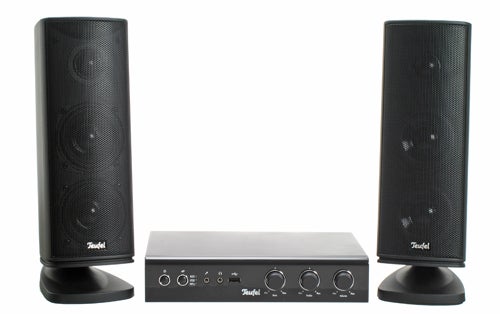 The clue to the Concept B 200 USB’s party trick is in the name. Rather than connecting to the audio output of your PC, the Concept Bs come with a dedicated amplifier unit, the CB 200 CS Control Station, that connects via USB. The benefit is self-evident; bypassing your PC’s integrated (read: rubbish), soundcard. There are two reasons you might want to do that. One, the digital-to-analogue decoding in Teufel’s amp unit will almost certainly be better than what your PC can provide, and two, amplifying an audio signal that has already been amplified itself (as a ‘normal’ set of speakers would) will only ever degrade it – an issue which Teufel’s set-up avoids. 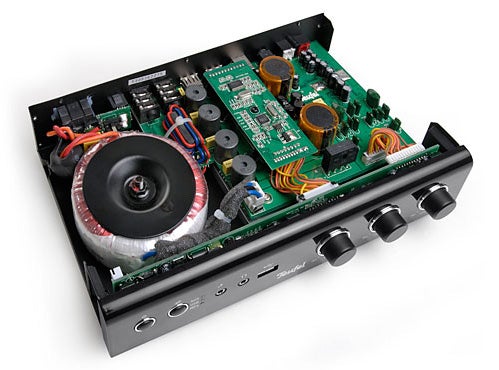 You only have to pick up the reassuringly heavy amp unit to get an idea of the quality audio it should output. Power is also drawn direct from the mains via a kettle lead suggesting that some serious components are at work inside (that toroidal transformer looks very nice). And if that doesn’t sell you, the black anodised aluminium casing and glossy black plastic front fascia look great even if they get noticeably warm in use.

Teufel has made the interesting choice of having the amp unit double as a USB hub. Two USB ports sit at the rear of the amp, alongside the ‘B’ type connector which goes to your PC. The rear also carries stereo phono inputs, a 3.5mm input jack, the left and right speaker connectors and a ‘proper’ power switch, for when standby just doesn’t cut it.

At the front, you’ll find standby and source select buttons, microphone and headphone jacks and a third USB port. Three knobs, controlling bass, treble and volume adorn the right and all have a lovely, smooth action to them making fine adjustment a breeze. Good luck pushing the volume up above a third of its full range without needing new eardrums, though.

The only disadvantage this set-up might pose compared to a more usual pair of speakers is the desk area required to place the amplifier. Specifically the unit takes up 250 x 52 x 170mm of your precious space, which isn’t exactly excessive. A subwoofer would certainly take up more space, although most likely under, not on top of, a desk, of course. 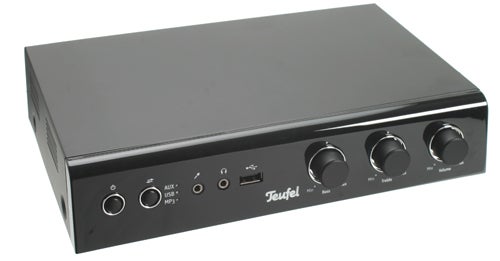 Each speaker stands about a foot high and is finished in matt black plastic, such that they match the amp nicely. Four channels are each powered by their own 30W output, which translates – as I already hinted – to a tremendous amount of volume at your disposal. Even pushed to the extremes the clarity never drops and there’s nary a hint of compression or distortion as you might find in a lesser set of speakers. 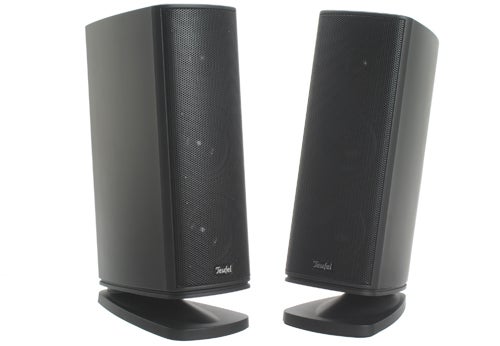 The lack of a subwoofer does mean the bass output is slightly lacking compared to a set of 2.1-channel speakers, but that’s not to say there’s none at all. In fact, the ‘trumpet-like’ design to the opening incorporated into the base of each speaker helps enhance those lower frequencies. However, if you’re the kind of music listener that thinks that the more bass presence is felt, the better your audio sounds you’ll want to look elsewhere. The Creative GigaWorks T3s or Razer Makos, for instance, deliver more on that front. 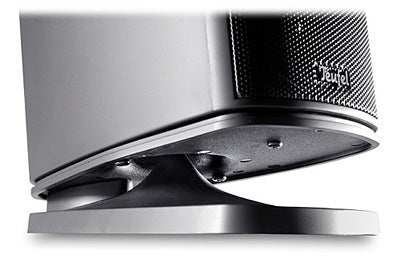 However, if clarity, precision and detail are important to you then the Concept B 200 USB speakers will be right up your street. The quality of their audio reproduction is nothing short of phenomenal. There’s simply no other way to put it. I’m not exaggerating in the slightest to say that these are the best sounding PC speakers I’ve ever had the pleasure of listening to by a decent margin.

Not wanting to sound hyperbolic, but playing the trailer for Terry Gilliam’s forthcoming The Imaginarium of Doctor Parnassus I was able to notice details – such as the rushing of the wind in the background over the end credits – that simply weren’t present using my PC’s admittedly awful integrated soundcard. Giving a range of other video content an airing and the results were similarly impressive. 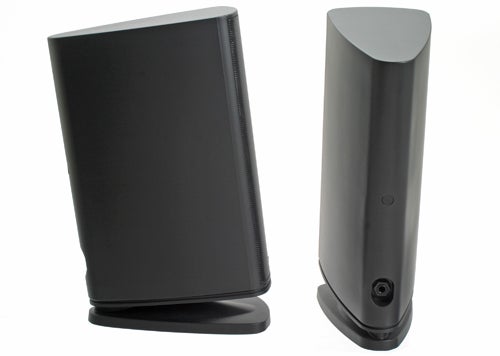 The only drawback is the slightly narrow soundstage the ‘2-channel’ stereo speaker arrangement offers, but that’s a fault of all such speaker systems. Some clever placement of the speakers will go some way to sorting that, if it really irks.


Turning to my music library I felt compelled to give just a few albums an airing. Muse’s better two works, ”Showbiz” and ”Origin of Symmetry” obviously, were reproduced with stunning precision. The strained tones of Matt’s guitar and voice ring out as clear as day, and even without a subwoofer there’s no shortage of presence from Chris’s penetrating bass lines or Dom’s hectic drumming. 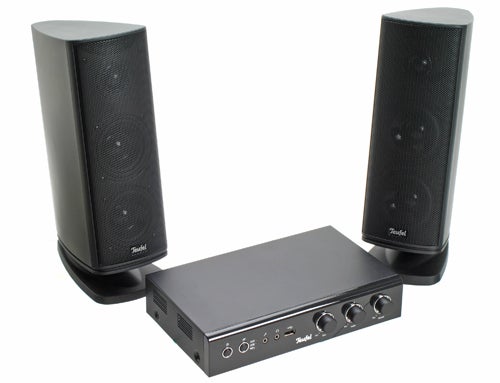 Calming things down a little and switching over to the beautifully melancholy ”Kingdom of Dust” and ”Lost Souls” by Doves I was equally pleased. The level of detail drawn out by the Concept Bs is simply wonderful. Almost without realising it I managed to also work my way through ”The Seldom Seen Kid” by Elbow before finding myself relaxing to the sombre but magnificent tones of Fleet Foxes’ self-titled album, so lost was I in the music.


Sure, turning a more critical ear to the output I’d have to concede that a few tracks could do with a bit more bass. But the sound produced by the Concept B’s is so warm and inviting that when just sitting back and listening, any complaints just melt away. Frankly, Teufel will only be getting these speakers back by prising them out of my cold, dead fingers.


By the standards of other subwoofer-less stereo PC speakers the Teufel Concept B 200 USB system is expensive, granted. But that’s to be expected because not only does the ‘break-out’ CB 200 CS Control Station offer convenient controls, a USB hub and a range of ports, it’s amplification finesse is in a completely different league. Film soundtracks are reproduced with aplomb and to listen to music through these speakers is to have your collection jump out and give you a warm, tender hug – it’s simply lovely. Trust me when I say these are worth every single penny.