The Teufel Columa 900 is the bigger brother of the Columa 700 system we reviewed back in March, and once again it aims to combine the German brand’s silky sound quality with a funky, flat TV friendly design.


Unlike the Theater 3 system that buried two subs inside the front speakers, this one uses a conventional 5.1 configuration made up of four column speakers for the fronts and rears, a horizontal centre speaker and a powered subwoofer.


The system costs £1,300 but after unpacking it from the boxes it feels like it should cost a lot more – you certainly get a lot of speaker for your cash. Each component is weighty and built to last, although understandably they’re not quite up to the same heavyweight standards as the Theater 3 or System 9. 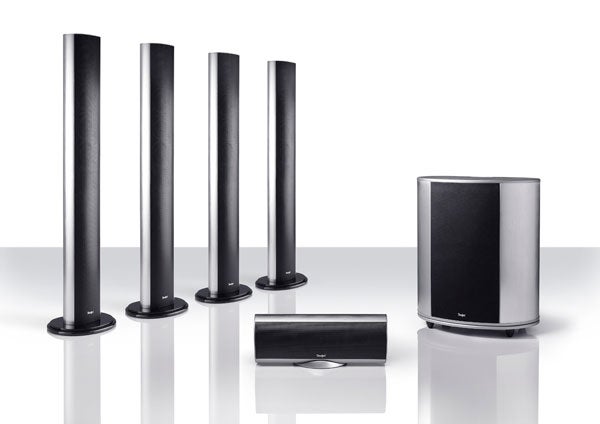 Looks-wise, the Columa 900 is typically attractive, with a black and chrome finish that communicates cutting-edge chic, a nice departure from the more elegant lines of other Teufel ranges.


But the system’s most compelling design feature is the remarkably shallow profile of the CL 90 FR front/rear speakers. Measuring just 8.3cm deep, you’ll have no trouble sliding them into tight spaces in your living room. Most of the front is taken up by a non-removable metal grille, keeping those drivers out of sight, and each one is screwed onto a gloss black stand.


The columns also boast an interesting driver arrangement, described as a 2.5-way system. Inside each one are four mid-range drivers, with the bottom two having a lower treble cut-off than the upper two. These lower drivers dip right down to an unusually low 100Hz, which lends extra beef to the bass output and also results in fewer frequency drop-outs caused by clashing frequency delays. There’s also a 25mm cloth dome tweeter that handles the delicate top-end stuff and should integrate seamlessly with the upper mid-range drivers.

The CL 90 C centre speaker is fitted with the same drivers as the columns, which should guarantee a uniform sound although it can’t handle as much power. Like the towers, the 25mm cloth dome tweeter is positioned exactly halfway between the two mid-range drivers. On the outside, the speaker looks like a mini version of the columns flipped on its side, and its slim dimensions make it easy to attach to the wall below your TV – otherwise, you can attached the supplied table mount and plonk it on your AV stand.


The system’s line-up is completed by the CL 900 SW subwoofer, which is a 25kg beast but carries its bulk well with the same smart chrome/black styling as the columns. Like the other speakers it’s surprisingly slinky at just 25cm deep, while its curved edges help it stand out from the hordes of boxy subs on the market. On the inside there are two vertically positioned 200mm drivers powered by a 250W Class D amp, and the quoted frequency range is from 38Hz up to 200Hz. 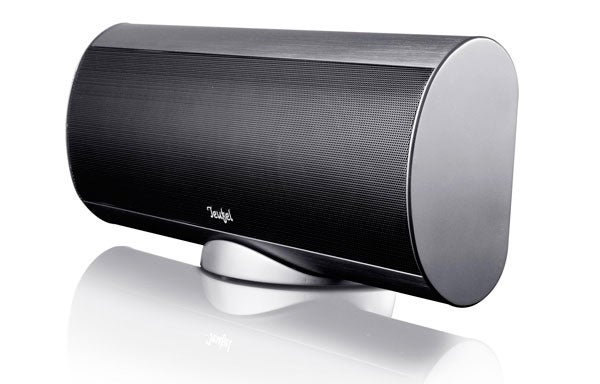 The rear panel is packed with knobs and connections that help you satisfy your taste in bass. There are two pairs of low-level cinch connections (one input and one output for adding another sub), dials that control the phase and frequency, high-level speaker terminals for stereo amps without a sub pre-out and a switch that alternates between Low Pass and Full Range, the latter bypassing the Phase and Frequency controls.


It certainly looks the business on paper but how does all this impressive-sounding tech perform? To find out we fired up Hellboy II: The Golden Army on Blu-ray and found that this system tears into the DTS HD Master Audio soundtrack with all the verve and poise of a far more expensive system.

During the movie’s noisy bits, like Hellboy’s barney with the Elemental, the Columa is utterly commanding. As the big beanstalk smashes its way through the parked cars, the bangs and crashes are delivered with enough force and intensity to have you using the nearest table as an Anderson shelter. It’s the sort of immersive, pulse-quickening performance that plunges you right into the action and doesn’t let go until the credits roll.


The superb high-frequency handling of those dome tweeters gives effects an irresistible crispness, augmenting the abundant detail in the movie’s high-res sound design and eking out delicate background minutiae that can go amiss on lesser speakers. The top-end detail is forthright and composed, and refuses to buckle even with the volume dial turned up to neighbour-bothering levels. And during the calmer moments it helps make dialogue sound clear and velvety.

The subwoofer also proves to be a formidable presence – the deep rumbles during Hellboy’s battle with the Golden Army effortlessly convey the brutality and urgency of the scene. But credit should also go to the low-frequency drivers in the columns, which not only lend extra heft to low-end effects but also blend beautifully with the sub to create a slick, cohesive whole.


Teufel also describes the columns as fully-fledged hi-fi speakers, and after enjoying a range of music material we can see where they’re coming from. Our trusty Kind of Blue CD sounds sublime, lending the jazz classic plenty of warmth and emotion.


If you’re looking for a stylish 5.1 speaker system that offers sensational sound quality at a very reasonable price then look no further than the Columa 900. It may lack the power and grandeur of Teufel’s System 9, but the fact that it even comes close at this price is reason enough to give it a whirl.