Teufel has been turning out some very impressive speaker systems of late, with the Impaq 500, System 9 and Motiv 3 packages impressing us with their breathtaking sound quality and typically Teutonic build quality. Now we turn our attention to the German company’s brand new 5.1-channel system, the Columa 700 R, which Riyad reported on recently – and it’s a TrustedReviews exclusive.


The system, which is recommended for rooms of up to 30m², comprises four CL 70 FR floor-standing columns (hence the name), a horizontal CL 70 C centre speaker and the CL 700/6 SWR subwoofer, which doubles up as a surround receiver with built-in Dolby Digital/DTS decoding, 250W of amplification and plenty of sockets for external audio sources. But if you’d rather use a separate receiver then there’s a separate version of the system (Columa 700) that comes with a normal active sub, the CL 700 SW. 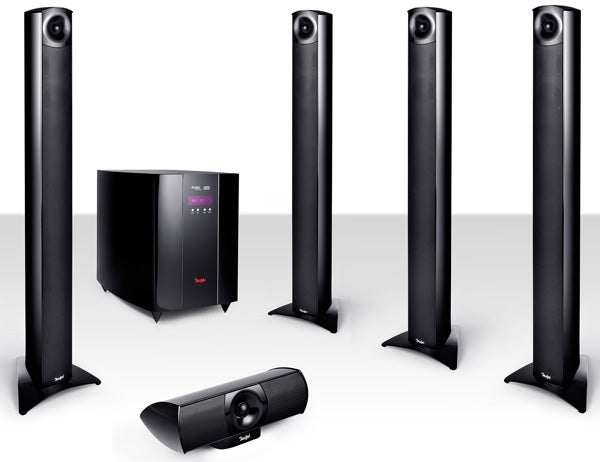 The entire Columa 700 R system is impeccably constructed and absolutely gorgeous to look at, thanks to the luxurious gloss-black veneer used on all of the components. The cast aluminium floor-standers’ sleek and sexy curved design not only gives them a striking appearance but also helps to deliver what Teufel describes as ‘an extremely precise, transparent and dynamic signal reproduction’. Each column measures 1,110mm high and is set onto a curved triangular base mount that has to be screwed on, and the end result is visually stunning and acoustically sturdy.


The power handling capabilities of the front and centre speakers are 110W and they boast a frequency range of 100Hz to 22kHz. They also boast tweeters with integrated ‘waveguides’, which guarantee a balanced, wide-angle dispersion of the treble frequencies to ensure that treble sounds great no matter where you’re sitting. The two mid-range drivers are positioned as a D’Apollito array and accurately match the tweeter.


The centre speaker features a similar design to the fronts but is designed to sit horizontally on the supplied table mount. All of the speakers feature sturdy gold-plated binding posts and can accommodate cable diameters up to 6mm.

As for the CL 700/6 SWR, it’s bulky, built like a tank and comes with four chunky spikes that screw onto the bottom. The downward-firing, long throw 250mm driver delivers bass frequencies from 30Hz up to 200Hz.


It’s surprisingly attractive for a subwoofer too, and features an eye-catching illuminated red Teufel logo at the bottom of its gently curved front panel. Towards the top, you’ll find a small, purple-illuminated display panel, which shows the current input and format being decoded. Beneath it are power, input and volume buttons for up-close control, but it also comes with a small remote, which is stumpy, cluttered and surprisingly cheap-looking for such a luxurious system. 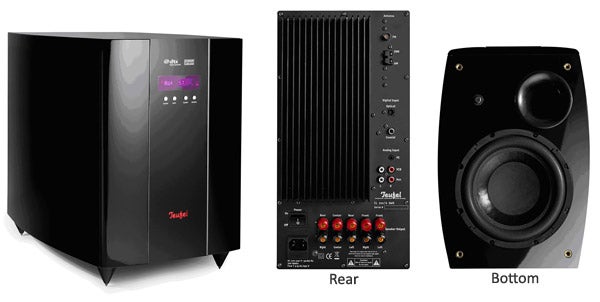 On the back is a decent array of sockets, including two analogue stereo inputs, PC audio input, optical and coaxial digital audio inputs and FM/AM antenna inputs for the built-in radio tuners. This isn’t a bad selection, but most home cinema fans will bemoan the lack of HDMI ports and Dolby TrueHD/DTS HD decoding, particularly with Blu-ray players being an increasingly common feature in British living rooms.


We hooked up the coaxial digital output from a Samsung DVD player to the Columa’s digital input and let it loose with ”The Fellowship of the Ring’s” Mines of Moria sequence. Its performance with this pulse-racing scene is sensational, delivering a fast, fiery sound with clean treble lending loads of snap to sudden effects like clanking swords and swishing arrows, without it ever lapsing into brashness.

Moving around the room, you get the sense that the tweeter waveguides are doing a great job, as the character of the treble stays the same no matter where you are. This excellent handling of high frequencies also allows the speakers to effortlessly convey the movie’s rich tapestry of sonic detail, from the distant rustling of leaves to gentle background ambience. The use of the same speakers for the front and rear channels – plus the same driver arrangement in the centre – ensures a uniform tonality across the soundstage, and of course their fantastic detail reproduction allows effects from the rear channels to be reproduced with pin-sharp clarity. 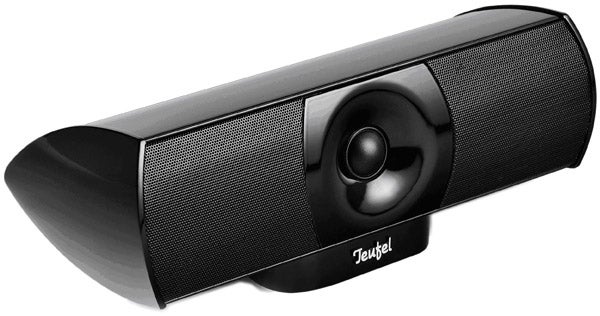 At the other end of the frequency range, the CL 700/6 SWR’s bass output is tight and punchy, and as a result the cave troll’s footsteps are given real presence as it stomps around the chamber, while its bellowing roar is deep and menacing. It’s perhaps not as potent as the subs supplied with some of Teufel’s more expensive systems, but there’s more than enough power on tap to give action scenes real clout.

Also impressive are the sub’s decoding capabilities, which ensure a wonderfully expansive yet involving soundstage with clean separation and impeccable steering. In the midst of it all, dialogue is conveyed with a clear, natural tone, and the movie’s sweeping score sounds rich and velvety as our heroes travel across the glorious New Zealand scenery. There’s a sweetness and sophistication about these speakers’ sound quality that makes them very hard to dislike, and although that price tag will put them beyond the reach of many buyers, once you hear them it suddenly seems like very good value for money. 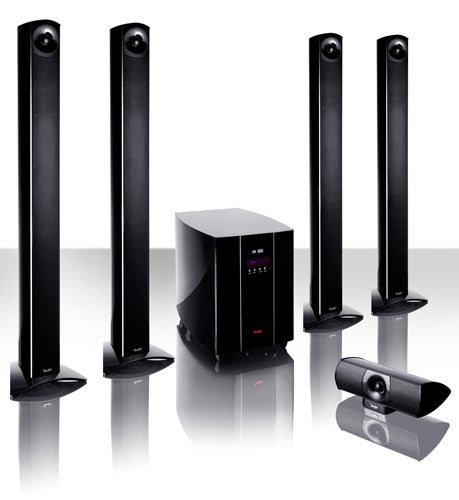 We also took the CL 700/6 SWR out of the equation and rigged up the speakers to our Onkyo TX-NR906 and Samsung Blu-ray deck, and the speakers take higher-resolution TrueHD and Master Audio tracks in their stride, delivering sparkling sound quality.


The Columa’s movie handling is immense but with music it’s just as impressive. Miles Davis’ ”Kind of Blue” on CD is beautifully reproduced, particularly the fragile, plaintive trumpet solos of ”Blue in Green”, which are delivered with a natural, transparent tone that never grates. With the more upbeat tempo of ”So What” it shows excellent rhythm and timing, a quality that comes in handy with more energetic musical genres like house and rock.


The Columa 700 R is yet another top-quality system from the Teufel stable, which combines sophisticated sound quality, elegant looks and faultless build quality – all for a price that might seem expensive at first but actually offers a lot of bang for your buck. The addition of a built-in receiver on the sub makes it a convenient proposition for those that need it, but although it’s a competent hub for your audio sources, the lack of HDMI and HD audio decoding is a real shame. Our advice is to pair the non-receiver Columa 700 system with a separate receiver, and hear these top-notch speakers really come into their own.