Columa 300 is the step-up version of the Columa 100 speaker system we reviewed earlier this year. Like its cheaper stable mate, Columa 300â€™s key feature is the inclusion of tall column speakers, which typically offer a more powerful sound than bookshelf speakers with their greater cabinet volumes â€“ and thanks to Teufelâ€™s cost-effective web retail approach, theyâ€™re yours for a much lower price than you might expect.


Columa 300 differs from Columa 100 in terms of looks and spec, and is designed for larger rooms (up to 30m²) but one thing they have in common is the ability to mix â€˜nâ€™ match tall and short columns, depending on how much space you have available. The two types of column are the CL 300 FR, which stand 1,123mm high, and the 392mm-high CL 300 FCR, which are more suitable for shelf placement or wall mounting. 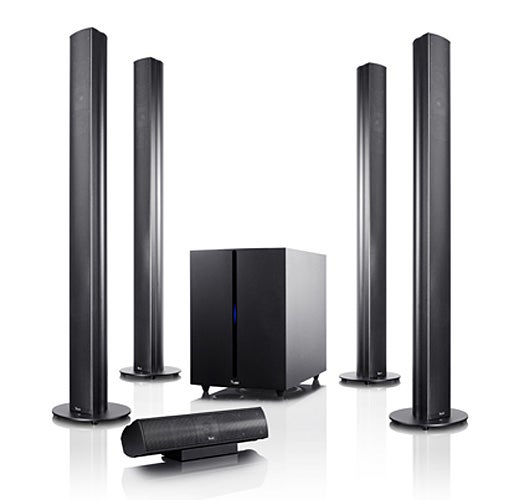 
Alternative versions of this system include the Columa 300R, which comes with an integrated 5.1-channel receiver, and the Columa 300 Wireless, which comes with Teufelâ€™s RearStation 4 â€˜wirelessâ€™ rear speaker kit thrown in. You can also upgrade from a 5.1 to a 7.1 system with a pair of additional CL 300 FCR speakers for Â£149.


We were sent â€˜Set Lâ€™ to test, with four tall columns styled in a sleek black finish (theyâ€™re also available in silver). Lifting the columns from the boxes, their heavy, solid aluminium cabinets ooze quality, which is not something youâ€™d expect from a Â£569 system. But this is Teufel weâ€™re talking about, a company that always punches above its price point when it comes to build quality. 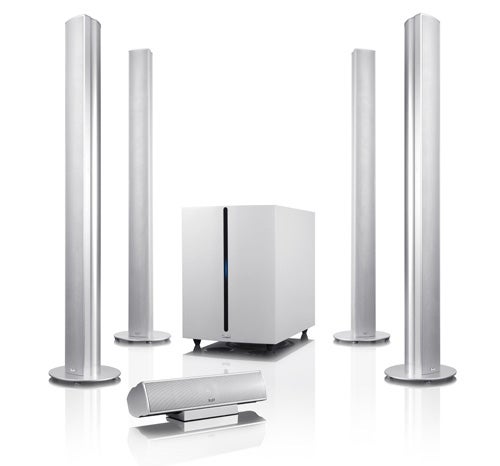 In situ, the speakers are attractive, but not as good-looking as the Columa 100, losing the distinctive side panels and glossy finish of the cheaper system. The look is more serious and streamlined.


At 220mm wide, the cabinets are remarkably slender and slip discreetly into their surroundings â€“ something that should earn them the thumbs up from any clutterphobes in your house. They screw onto heavy round metal bases, which again seem like they belong to a pricier system. On the back of each column are high-quality binding posts, placed right at the bottom to keep the cables out of sight.


The centre speaker also looks less playful than the Columa 100â€™s version, again ditching the semi-oval shape and gloss black panels above and below the speaker mesh. Itâ€™s 100mm high and 126mm deep, which should pose no problems when it comes to placement, and for table-top mounting it sits in the supplied cradle.


As for the subwoofer, itâ€™s much bigger than the Columa 100â€™s version, making it trickier to accommodate, but equally attractive. Its all-over black finish is broken up by a slim blue light on the front, and itâ€™s mounted on rubber feet to help with the downfiring effect.

Despite their differences in size, the short and tall columns have been acoustically matched to each other, with the same internal volume, materials and driver configuration, so there are no issues when mixing them up.


The two-way design includes two 70mm Klippel-optimised cellulite midrange drivers and a newly developed 19mm mesh-dome tweeter with a neodymium magnet, arranged in the Dâ€™Appolito configuration (a woofer above and below the tweeter). The numbers also look pretty good, with 100W power handling, a frequency range of 140Hz to 20kHz and a sensitivity of 84dB. 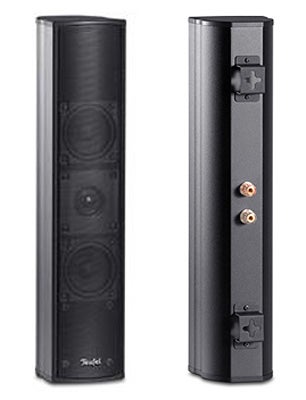 
The magnetically screened centre speaker shares the luxurious build quality of the other speakers, as well as the same drivers to ensure a homogeneous sound across the board. Unlike the columns, the front panel is removable should you prefer those drivers to be on show.


The subwoofer packs some serious bass-making hardware â€“ a 260mm bass driver sits inside the 41-litre enclosure, while the built-in digital amplifier musters 180W of power, some 80W greater than the Columa 100â€™s US 5108/1 SW. 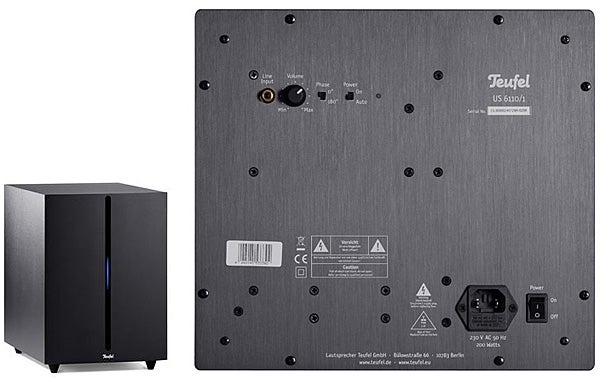 
The back of the sub features a lovely brushed finish, set into which is a cluster of controls, including a volume dial, phase and On/Auto power switches, plus a mono line input. A separate power switch at the bottom lets you shut it down completely.

The Columa 300â€™s sound quality is very impressive indeed, more compelling and authoritative than the Columa 100 â€“ and many other similarly priced systems, for that matter. The first thing we noticed is how powerful the system is, which gives epic action scenes the sense of scale and drama they require.


That means sequences like the opening to ”Inception” are an absolute thrill ride â€“ fast, detailed and expansive, with plenty of punch in the lower frequencies. Loud explosions and deep rumbling as buildings collapse are relayed with a deep, hearty thump. Likewise the thunderous noise of the rioting crowd outside Satoâ€™s apartment, which is every bit as menacing and tension-building as the director intended. 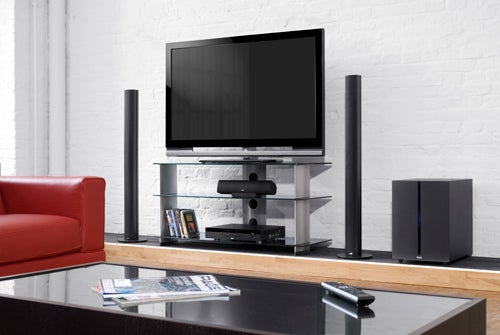 This is largely down to the extraordinary efforts of the subwoofer, which delivers tight blasts of raw, concentrated bass that never sound flabby. Bottom-end effects hit you where it hurts, but donâ€™t overpower the other speakers, and itâ€™s this balance and cohesion that makes for such an enjoyable listen.


And at the other end of the sonic spectrum, high-frequency reproduction is a delight. The lightest, most delicate effects can be heard filling out the background of talky scenes, such as Cobb and Ariadne walking the Paris streets, but detail also shines during lively scenes â€“ for example, smashing car windows break through the frenzied cries and rumbling footsteps of the rioting crowd.


The centre speaker has no trouble making itself heard, projecting dialogue with a clear, forceful tone and refusing to strain when charactersâ€™ tempers get the better of them.


Of course, this richness, detail and surprisingly impressive bass handling is in evidence all around the soundstage thanks to the matched speakers. Despite the budget price tag, this certainly isnâ€™t a budget performance, sounding a lot more mature and distortion-free than you might expect at this price. Itâ€™s also surprisingly musical, delivering a smooth, warm and confident rendition of Incognitoâ€™s ”Transatlantic RPM” CD, even when using the columns as a straight stereo pair sans sub.


Listening to movies and music through Teufel’s Columa 300 speaker system is an exciting, absorbing experience. Itâ€™s the sort of performance youâ€™d expect from a more expensive setup, and thankfully irons out the flaws we noticed with the Columa 100.


We love the solid aluminium construction, which again is better than you have any right to expect for 500 quid, and with a wide range of packages to choose from, thereâ€™s something for everyone. The only slight disappointment is that it doesnâ€™t look quite as stylish or distinctive as the Columa 100, but even so these slender columns are still sure to appeal.