What is the Teufel Cinebar Pro?

The Cinebar Pro is a large, weighty 2.1 soundbar/subwoofer system with a twist. The twist is that despite its frighteningly price tag, it lacks cutting-edge niceties such as Dolby Atmos and Alexa integration.

So can a case still be made for a premium stereo soundbar in this age of smart, immersive audio?

Let’s not beat around the bush: the Cinebar Pro is a beast of a soundbar. Measuring more than a metre wide, and weighing a whopping 11kg, it’s hardly discrete. And don’t think of partnering it with a flat-screen TV less than 65 inches.

Even its substantial, integrated wall brackets are intimidating. 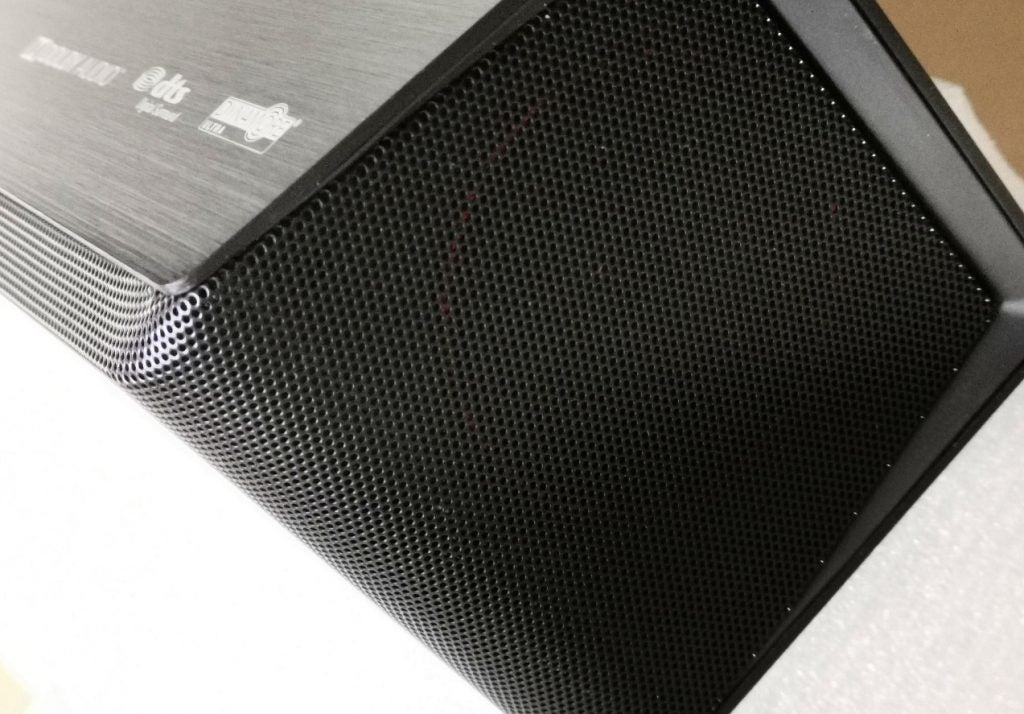 For those not brave enough to wall mount this unit, a simple pedestal stand is provided that slots into a recess on the rear. This is secured with Allen bolts, as are the feet on the accompanying wireless subwoofer. Annoyingly, there’s no Allen key supplied to tighten them.

Build quality is undeniably high; this thing is built to last. The metallic grille is non-removable, and the cabinet itself has a stylish brushed aluminium finish. Barely visible through the mesh, its drivers sport devilish red rims that catch the eye when light makes it through.

The driver configuration is interesting. The main stereo channels utilise twin mid-range squawkers and a tweeter. There are also two additional side-mounted cones that come into play when Teufel’s Dynamore processing mode is selected. Available in Wide or Ultra mode, Dynamore expands the soundstage laterally. The total power output is rated at 200W.

The Cinebar Pro ships with Teufel’s wireless T 10 subwoofer. Hardly compact, this is a ported design with a sizeable 10-inch driver, and 150W power plant. 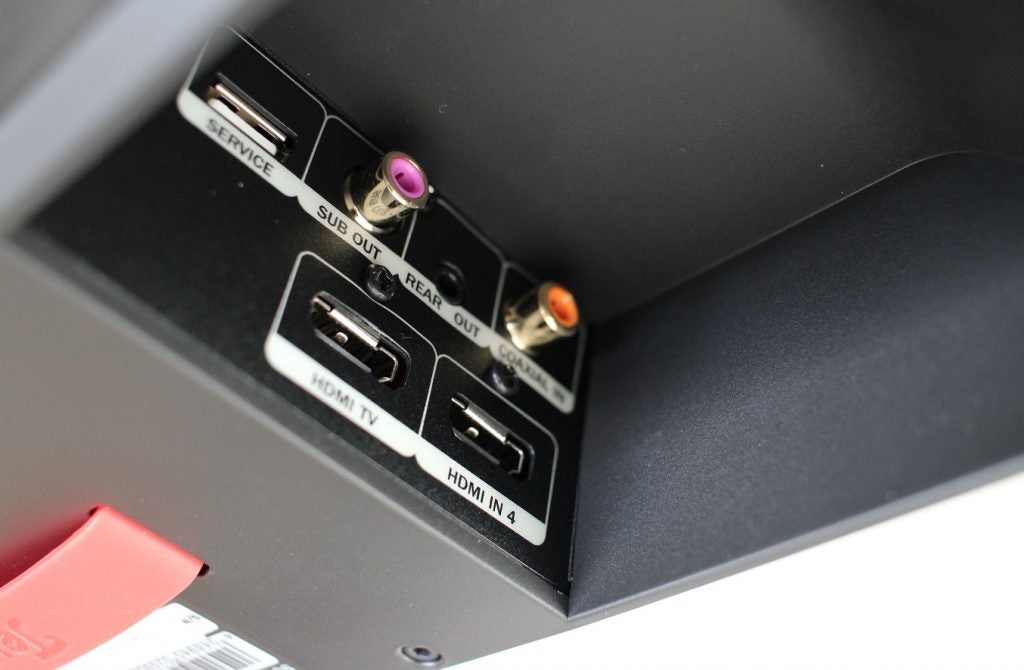 There are also coaxial and optical digital audio inputs, two 3.5mm aux inputs, and a wired subwoofer output (not required, as the supplied sub is wireless). There’s also a 3.5mm headphone jack.

Wireless support covers Bluetooth and Wi-Fi with Google Chromecast built in. A pair of Wi-Fi aerials rises centrally. It’s probably worth noting this when installing, if only to ensure that when raised they don’t poke into the TV picture area. It would be preferable not to use them; however, there’s no Ethernet hardwire network option provided.

Around the back there is some cable management, in the form of branded red rubber bands that can be used to stop cables dropping into view.

While essentially plug ‘n’ play – you can haul it straight from its box, hook it up, and kick back with some popcorn – time spent tweaking the Cinebar Pro will reap big rewards.

There’s nothing fancy about the Teufel’s on-screen menu system, but at least it has one. There’s no calibration mic supplied, but you can manually enter distances between your couch, the soundbar and subwoofer. 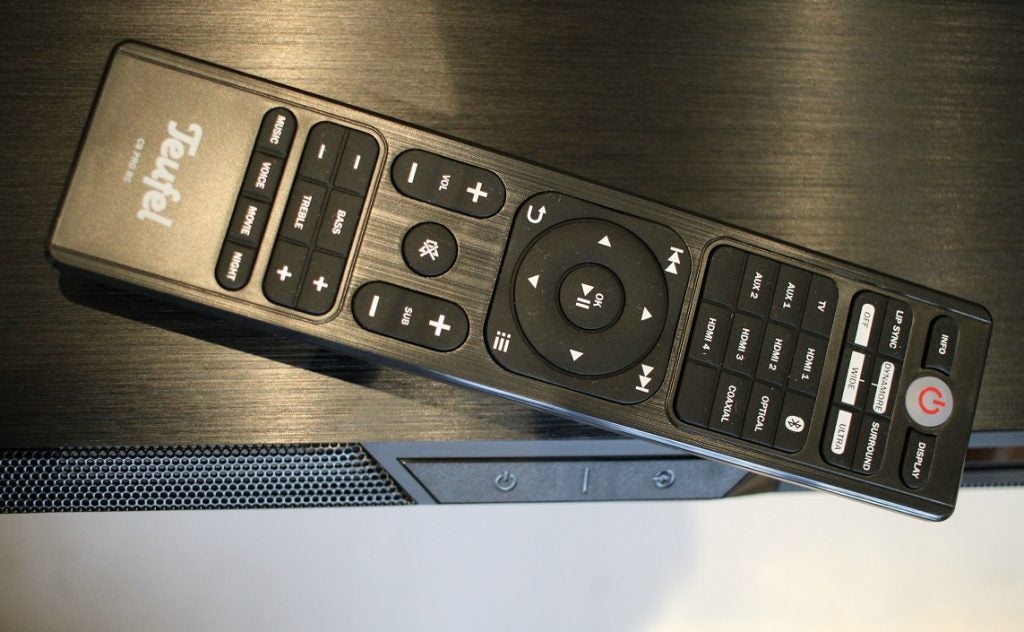 There are also options to enable HDMI pass-through, altering lip-sync delay (variable between 0 and 250ms) and TV source selection. When setting up, the wireless sub automatically pairs with the Cinebar Pro. Crossover is variable between 100, 120 and 150Hz, there’s also a 180-degree phase-shift adjustment if required, and a bass boost level control too.

The soundbar recognises both Dolby Digital and DTS sources, with multi-channel down-mixed to 2.1. The subwoofer itself can be used with its driver facing down, or firing forward. Generally, you should have the sub downward when it’s placed close to a wall, within rumbling distance of a screen.

If you have the space to position the sub away from a wall, the forward-facing option is probably the most effective. In addition to a fully featured, full-size remote control, the soundbar has on-body controls for volume, power and source selection, playback modes and simple EQ.

By now you might be wondering just why you should part with more than a grand for this old-school 2.1 behemoth. Here’s the thing: it sounds huge. Teufel might hold not truck with fancy immersive codecs, but this big bar gets the basics bang on. 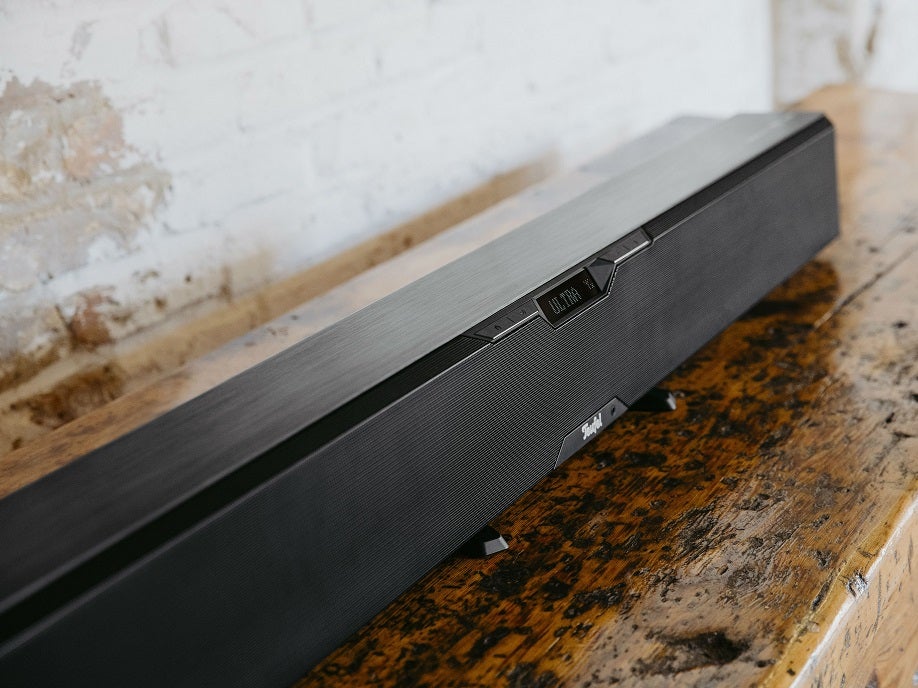 It delivers a wall of sound that isn’t only crisp and detailed, but visceral too. It not only articulates voices perfectly, and highs kept crystalline clear, but it’s also hair-raisingly exciting. And that huge bass driver has no shame when it comes to big-screen theatrics: it slams and pummels without compunction.

There’s real depth here. The sub sounds deep and meaningful at 31.5Hz, and can rearrange internal organs at 50Hz. The integration ‘twixt sub and ‘bar is also impressive. There’s no obvious gulf between the two; the combo hits home like Thor’s Mjölnir. 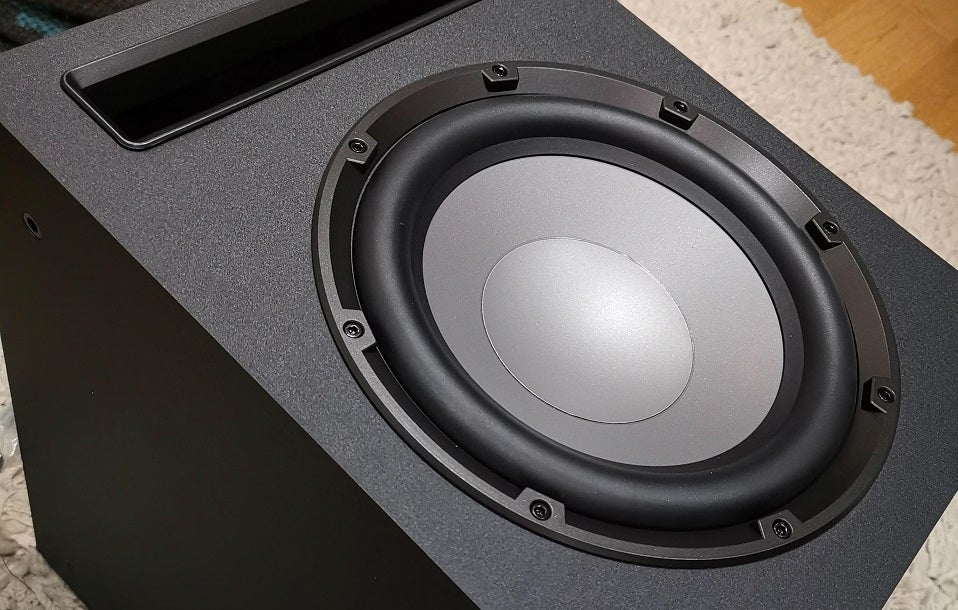 This is demonstrated early on in Sicario 2: Soldado. The terrorist attack in the supermarket is all the more shocking, when that big driver shakes the room.

With its Dynamore processing mode engaged, those side-facing drivers widen the soundstage to almost CinemaScope proportions. A great example of this is the scene setting Sicario chopper flyover, which gains extra travel in Dynamore Wide. The presentation is filmic.

Why buy the Teufel Cinebar Pro?

This big Teufel makes a virtue out of old-school simplicity. This 2.1 system is physically big, with a soundstage to match. There’s no attempt at design minimalism here; this is a Barbican of a ‘bar.

We can see it appealing to those in no rush to upgrade their existing system for immersive audio, or folk who want a 2.1 sound system that will work equally well with most content sources. Unfortunately, that asking price is steep for the specification.

Beautifully built, with a bass attack that could crack walnuts, the Cinebar Pro sounds as terrific with blockbuster movies on Blu-rays and it does with daytime TV shows. There’s no denying it offers terrible value for money – but sometimes, we just don’t care.