The Cinebar 50 is Teufel’s first stab at soundbar technology, catering for those who want a taste of the German brand’s patented audio expertise but don’t have the funds or freedom to install one of its more luxurious speaker systems in their home.


If you’re unfamiliar with the soundbar concept, here’s the low-down – the Cinebar 50 combines speakers, surround sound decoders, a preamplifier and a 200W power amplifier into a single unit, which makes it possible to mount the entire system on the wall below your TV or perch it on your AV rack. The general consensus is that TV speaker sound quality is pretty crap, so soundbars are a great way of upgrading sound quality without committing to full 5.1. 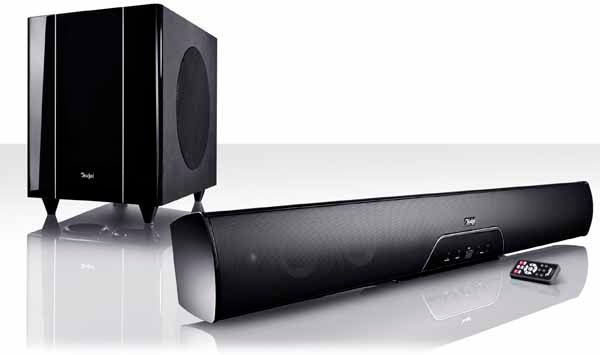 But most soundbars struggle to deliver the deep, foundation-shaking bass needed to give movies a real kick, so that’s why the Cinebar 50 is supplied with a powered subwoofer, which pumps an additional 150W of bass power into the room.


Having tested a number of Teufel’s speaker systems, it comes as no surprise that the main unit is impeccably built. It’s long and slender but surprisingly heavy, and the seductive gloss-black finish is likely to make your mates’ jaws drop open like a nest of hungry baby birds.


Peeking through the front speaker mesh are two mid-range drivers, two low-midrange drivers and two tweeters, dissected down the middle by a simple blue display panel, which shows whole words as opposed to one or two digits, plus a basic button arrangement that controls power, source and volume. 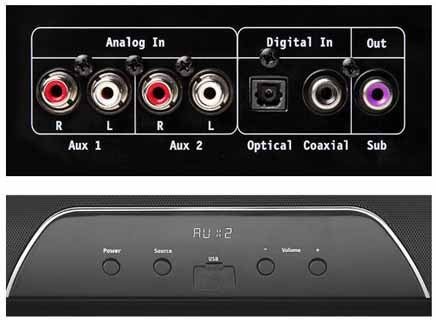 But here’s the best part – bang in the middle is a USB port (complete with a rubber dust cover), which allows you to play your MP3/WMA files from flash drives (up to 8GB) and hard-disks (up to 160GB) without even having to connect a Blu-ray or DVD deck.


On the back Teufel has attached a pair of incredibly strong wall-mounting brackets (which can be removed), and Teufel has thoughtfully included a set of angled socket adapters that allow connected cables to run downwards instead of sticking out awkwardly. In the box you’ll also find a base for the soundbar to sit in when placed on a stand.

As for the CB 50 SW subwoofer, it’s styled in the same luxurious gloss-black finish as the Cinebar with two eye-catching silver stripes running down the front, all of which prevents it from looking like an eyesore if you can’t hide it away. But for a system that’s all about saving space, it’s remarkably big and bulky, measuring 30.5cm x 42cm x 46cm – something a bit more compact would have been preferable. You may want to factor that in when planning where you’re going to put everything, and it’s also worth noting that unlike some of Samsung’s soundbars the sub connects to the Cinebar using a cable, which could cause you further installation headaches. 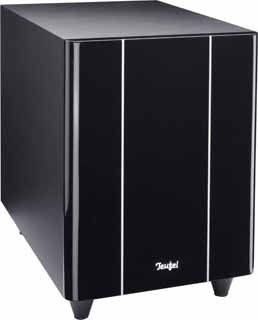 Connections are basic but this isn’t designed to be an AV epicentre – if you only have a couple of sources to connect (a DVD deck and Sky+, let’s say) then the selection should suffice. On the back of the main unit are two pairs of analogue stereo inputs, optical and coaxial digital inputs and the subwoofer output, while the back of the sub sports a cinch input and a volume dial, but more complicated controls like crossover and phase are sensibly omitted.


The Cinebar can decode Dolby Digital and DTS soundtracks and features a stereo amplifier (2 x 100W), but to make the sound more movie-friendly Teufel has included Dolby Virtual Speaker to generate a virtual surround effect. It comes in three modes – Stereo, Wide and Reference – which can be selected using the Mode button on the remote.


Joining Dolby Virtual Speaker is a range of EQ modes primarily for music playback, including Rock, Pop, Classic and Jazz, although for movies you’re better off opting for the ‘Flat’ setting. 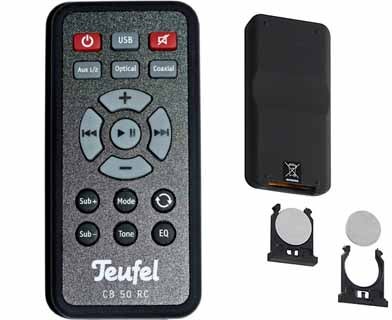 Unsurprisingly the system is a complete breeze to setup – place the components, plug them in, hook up the sub cable, done. But bear in mind you’ll need two free plug sockets as both units need power. Once installed the number of adjustments are limited. You can fine-tune the bass and treble levels using the Tone key, or change the sub volume using the +/- keys on the remote (separate from the main volume keys).


The credit-card sized remote will probably end up living down the back of your sofa, and it’s fitted with squashy buttons that are a little laborious to press. But at least they’re neatly arranged and well labelled.


To test the Cinebar 50’s mettle we fired up that old home cinema stalwart Gladiator and it’s safe to say that the sound quality is among the best we’ve heard from a soundbar. Perhaps not as smooth, powerful or detailed as the B&W Panorama (unsurprising given it’s about £1k dearer) but even so it’s a marvellous performer.

What’s most apparent is the Cinebar’s ability to dig out detail and convey high-frequency effects in a clean and enjoyable manner, even when the volume is turned up to near maximum. This gives soundtracks an irresistible sharpness and dynamism that some soundbars struggle to muster.


The opening battle scenes, for instance, are all clattering swords, swishing arrows and shouty soldiers, and through the Cinebar it makes for a gripping listen – the melee of effects are flung around the soundstage with satisfying directness and energy. Later on, it effortlessly teases out the gladiators’ clinking armour as they prepare for battle.

There’s also plenty of width – cut to the cheering crowds inside the coliseum and it certainly feels like you’re being enveloped. It’s no match for the clean channel separation and accurate placement offered by real rear speakers, but the soundstage is wider then you may expect.


We’re also happy with the clarity of dialogue, which comes through cleanly no matter how action-packed the scene. The subwoofer is a bit more restrained than we imagined it would be given its size and quoted power output, but it still lends convincing depth to the sound of chariots thundering round the coliseum without sounding boomy.

The Cinebar is also a dab hand with music through the analogue stereo inputs, unearthing plenty of detail. Adele’s 19 on CD sounds fantastic and her distinctive vocals are relayed with a pleasing tone. It’s a very crisp, clinical sound and perhaps lacks some of the warmth you’d get from some other Teufel speakers but it’s still utterly enjoyable.


The Cinebar 50 is an impressive soundbar debut from Teufel, offering the sort of sophistication we’ve come to expect from this company in terms of design and sound quality, without you having to pay an unreasonably high price for the privilege.


It’s definitely better than many cheaper rivals (the Crystal Audio and Sharp spring to mind), which justifies the higher price tag. You also get some nifty features into the bargain like a USB port and Dolby Virtual Speaker, which is moderately successful here, although we’ve heard better virtual surround and overall the sound quality falls short of B&W’s benchmark.


And while we’re having a moan, some HDMI ports and HD audio decoding would have been nice and that sub is inexplicably big for a space-saving solution, but these are mere blips in an otherwise superb soundbar.