Beautiful, hypnotic and frequently surprising, Tetris Effect is a bravura reinvention of a classic game that deserves to be recognised as a series peak.

Tetris has always been an exceptional puzzle game; now, thanks to the efforts of Tetsuya Mizuguchi and developer Resonair, it’s something much more than that. Mizuguchi’s career-long fascination with synaesthesia has given us the likes of Rez, Lumines and Child of Eden – and in the way it turns play into performance, Tetris Effect has at least as much in common with those games as Alexey Pajitnov’s seminal puzzler. The result, not unexpectedly, is extraordinary.

On its most fundamental level, this is the Tetris we all know and love. Tetriminos, geometric shapes comprising four tiles each, fall from the top of the screen into a well; your job, as always, is to rotate them to form complete horizontal lines, which are subsequently removed from the play area. And, as always, you’re beholden to the whims of the unseen Tetris gods, who have a habit of giving you a square block when the topography of your stacks is at its most uneven, and consecutive straight-line pieces just as you’ve plugged a column in desperation. The hold queue is present, however, letting you keep a single piece in reserve should you want to switch out the current Tetrimino – though once you’ve made your choice, you can’t swap back. The fundamental mechanics remain the same, but Tetris Effect amps everything up to a giddy, hallucinatory level.

That might all sound familiar on paper, but in practice it feels very different. Your every input produces a musical or visual response – often both. One stage is set against the wooden creaks and clicks of windmills, their sails turning gently as you rotate the pieces. In another you’ll hear Quindar tones, radio crackles and muffled exchanges between a NASA astronaut and ground control. Clearing lines has a more noticeable effect. In one level, cascading jewels (which spin as you rotate the blocks) swing back and forth on each clear. Lines are cleared more vigorously if you trigger a combo or earn a Tetris. It’s a good incentive to play better, and during the slower moments – or even when the speed ramps up if you’re feeling cocky – it’s hard to resist trying to sync your actions to the beat.

You’ll play three to five stages consecutively in Tetris Effect’s default Journey mode, and though there’s seemingly no overarching theme for each set (the winningly eclectic soundtrack pinballs between euphoric trance and jittery electronica via jazz and tribal drums) there’s a strong sense of escalation all the same. It’s more pronounced within individual stages, with sweeping visual changes – a rain-lashed forest steadily brightening as dawn approaches, to name but one – along with sudden tempo shifts for every dozen lines you clear on Normal difficulty. 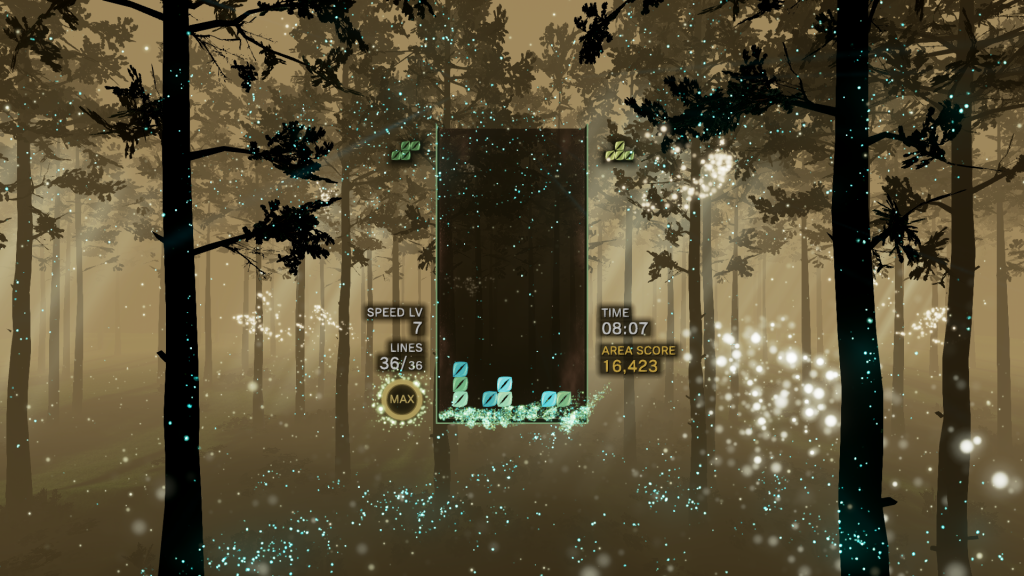 For all the pyrotechnical sturm und drang, Tetris Effect offers quieter, more reflective moments, like this one.

In general, most songs start gently, giving you a chance to settle in before the pace ramps up; some set a fast tempo before slowing down, giving you chance to recover and clear some space for the final push. The game’s generous enough to let you continue from the start of a single level if you fail; although your score will reset and you’ll get a lower grade, it means every type of player should eventually see the journey’s end.

By the third set of stages, it feels like Resonair is showing off, though to elaborate much further would be to spoil some of the most surprising moments I’ve experienced in a game for a long time. Suffice to say, there’s a sequence that segues between two very different kinds of pioneer, capturing the range of human experience in profoundly moving fashion – and that’s just for starters. A hard left turn in the third of four stages made me burst out laughing at the sheer audacity of it. It’s exhilarating and, particularly in VR, totally enveloping – and yet somehow, that serves to focus the mind all the more. 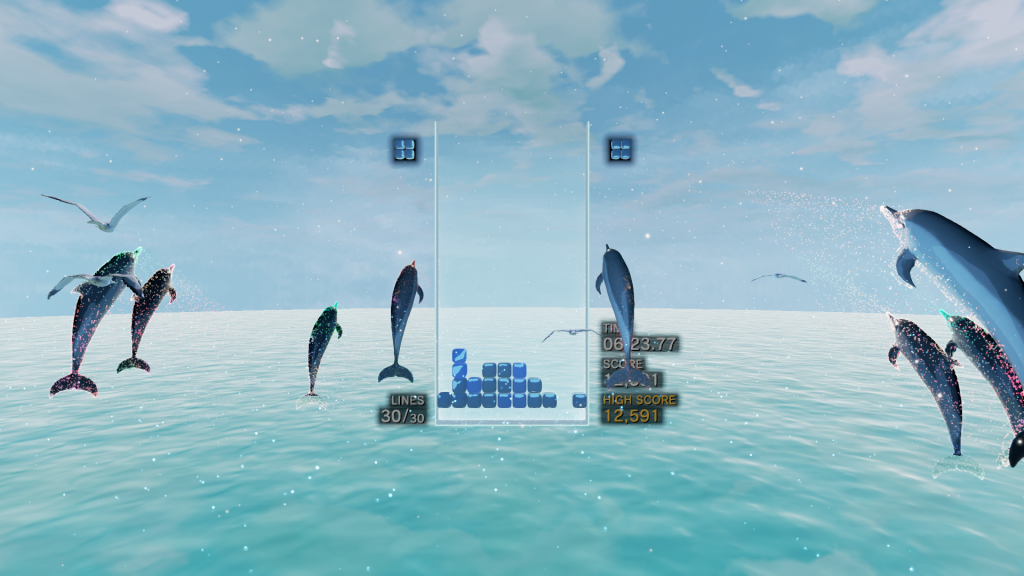 Altogether now, “So long and thanks for all the Tetris!”

As you stare intently at the central gulley and swirls of light dart by in your peripheral vision, it’s almost like receiving a scalp massage as you play. Visuals you can feel? It all feels like it’s part of some synaesthetic masterplan dreamed up by Mizuguchi.

Invariably, there are moments when you hit up too soon and a hard drop lands in the wrong place, or you rotate a piece once too often and leave yourself with a literal mountain to climb. At which point, a squeeze of the left trigger temporarily gives you a bit of breathing space. A zone meter fills as you play – more quickly at higher difficulties, and in larger increments when you clear several lines simultaneously or consecutively. Releasing this fades the soundtrack, letting you complete lines that stack rather than disappearing, exploding only once the zone empties and boosting your score accordingly. 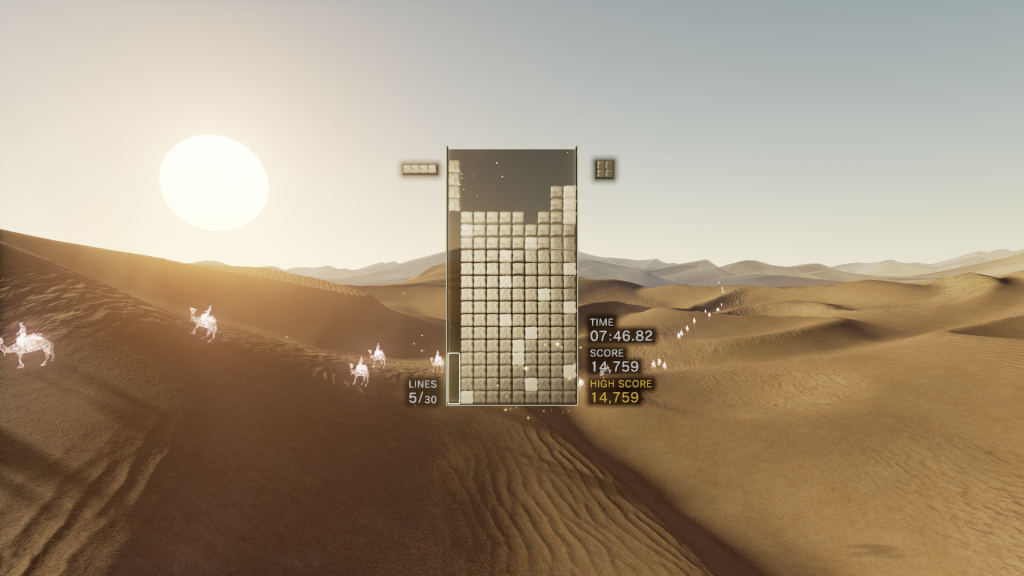 Tetris Effect transports you to a number of beautifully rendered locations. Unnecessary? Yes. Gorgeous to look at? Also yes.

For some players, this is a handy get-out-of-jail free card when all looks lost, but the best players will deploy it for massive bonuses. I’m by no means one of them, though I have managed a 16-line Decahexatris; get between 18 and 20 and an elusive Perfectris will be yours. Again, there’s a performative element to this: it’s fun to wait before dropping the final piece, like a DJ teasing the crowd before reaching for that fader and bringing the beat back.

There are moments of calm, but Tetris Effect is far from the soothing, zen-like experience you might think. Occasionally, the shifts in tempo seem a little too extreme. At a surprisingly early stage, it reaches a level of challenge on Normal difficulty that I predict many will struggle to keep pace with. Which is fine – this is clearly tailored more towards Tetris veterans than novices – but consider this advance warning that a not-insignificant number of players may have to stick to Beginner mode, at least for a little while.

Still, it’s not as if there’s a shortage of alternatives. Three relaxing themed playlists take the pressure off, keeping the action at a steady pace with an ambient backing and no game over. At the other end of the scale, you’ve got more focused options, where you’re scored by the number of combos earned and target blocks cleared. Other variants ask you to clear ‘infected’ blocks within three minutes, or prepare the well for an incoming line piece. And the classic game types, from Sprint to Marathon are present and correct besides. Perhaps the pick of the bunch is Mystery, where you need to adapt to a range of random effects, from bombs that need defusing to giant Tetriminos – or if you’re particularly unlucky, a flipped display with reversed controls. 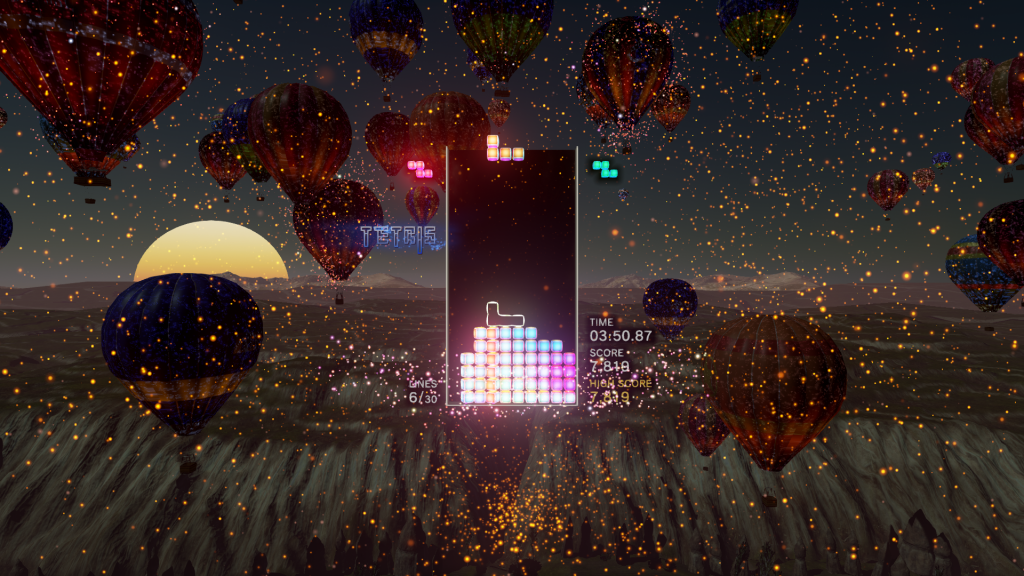 Once Tetris Effect’s charms have snared you, it’s hard to resist the temptation to lock into a rhythm.

On top of the now apparently mandatory RPG-style progression system – the unlocks for levelling up are hardly worth shouting about – there are collaborative online events where Tetris Effect invites its players to join forces to achieve a target tally. On paper, the notion of a world united by its shared love of Tetris feels like a combination of naive optimism and corporate bullshit. In practice, as you float serenely above the world, with avatars of your fellow Tetris addicts swimming by, it becomes strangely touching. “We’re all together…don’t you forget it,” sings vocalist Kate Brady in the game’s signature theme, I’m Yours Forever. Soppy as it might sound, in these divided times it acts as a much needed corrective.

But then Tetris Effect wants you to feel deeply connected to all things: from the creatures of the world to your fellow man and even to the Earth itself. That might sound horribly pretentious for a game that’s ostensibly about slotting falling blocks into gaps. Yet as you do just that, you’re taken on a mesmeric audiovisual journey, one that carries you from the ocean’s depths, up through the sky, into the stratosphere and beyond. In every sense, it’s an unforgettable trip.

Beautiful, hypnotic and frequently surprising, Tetris Effect is a bravura reinvention of a classic game that deserves to be recognised as a series peak. The odd difficulty spike aside, there’s little to fault in what is undoubtedly one of 2018’s very best games.