I’m not usually one to ignore the chance to ridicule grandiose nomenclature, so when I was first introduced to the Tension Labs EAP03 by our resident newshound, Mr Kelly, my first temptation was to mock the name. After all, it’s really just another portable headphone amp, isn’t it? For once, no. The EAP03 is both much more and just a little less than that. 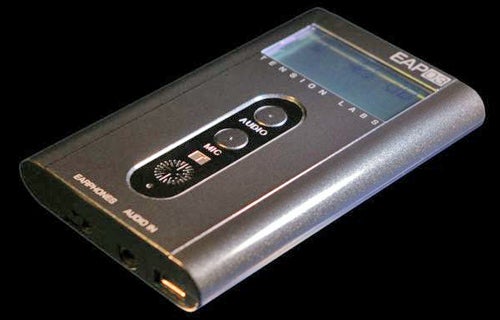 Released some time ago in the US, but now being introduced to the UK by the guys at Advanced Communications Solutions, the EAP03 is designed to accompany your MP3 player and earphones – more specifically in ear monitors – both on and off the road. The point about IEMs is important. While other portable headphone amps, like the iBasso Boa D2, are aimed more at larger, over the ear headphones – though they also work wonders with demanding IEMs like the Klipsch Image X10s or Shure SE530s (aka the E500PTH) – the EAP03 is focused squarely on the type of thing you wedge into your ear canals. You can use it with full-sized headphones, but that’s not really where its strength lies. You see, on top of basic amplification, the EAP03 also provides a range of features aimed at optimising and enhancing the output from IEMs, and making using them a little more practical while on the move.


Measuring 82mm x 53mm x 13mm, the EAP03 has a similar profile to an old iPod mini, and at 55g it’s both smaller and lighter than competitor products like the aforementioned D2 or the Graham Slee Voyager Amp (though of course not the miniature E5 and E3). The design is fairly simple, with a 3.5mm input, a 3.5mm output and a mini USB connector, a jog dial on the side and two buttons, a two-line monochrome LCD screen and a microphone on the front. Despite the plastic construction build quality is generally sturdy, and a number of stick-on Velcro patches are provided so you can affix your player to the EAP03 for easy transport. The only other accessories provided are the USB cable (for charging) and a short but chunky 3.5mm to 3.5mm interconnect, for hooking up the input on the unit to the output from your player of choice. 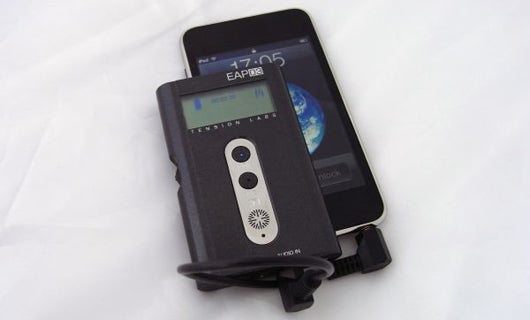 For power, the EAP03 uses a built-in lithium polymer battery, which takes two to three hours to charge and lasts for seven to eight hours at a time. That doesn’t compare brilliantly with the iBasso D2, but it’s enough for everyday use, if not a weekend trip or long-haul flight.


The EAP03 takes a little more setting up than your regular headphone amp. First of all, you need to know the sensitivity rating of your IEMs in dB/V at 1KHz. Some common Shure, Ultimate Ears and Etymotic models are listed in the manual and you can find more detailed on the Tension Labs website (http://www.tensionlabs.com/support.htm), but you can easily find the information yourself if you need to with a visit to Google.


Once you have this info, you can set up the EAP03 by using the jog dial to flick through the settings and the Audio and Mic buttons to make adjustments. First you set the Earphone Sensitivity, then you set the Amp Gain accordingly – without these two steps, you won’t get a great result from the unit. In fact, you’ll probably make the sound worse than it is through your player’s regular headphone output.

Here’s where things get clever. You see, the guys at Tension Labs care about your hearing. Now, we all know that cheap earbuds are bad for your ears – you have to whack the volume up to unsafe levels just to get a decent sound above background noise – but there are dangers even with high quality IEMs. that’s because a) there’s less distortion at higher volumes (encouraging louder listening) and b) many of us tend to like the sound we get at higher levels; even audiophiles risk putting their ears at risk. 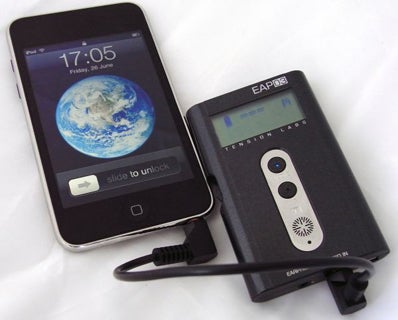 The EAP03 helps you keep a lid on this. By default, it uses the sensitivity and amp gain data provided with an analysis of the volume signal running through to give you an accurate idea of the actual output hitting your eardrums in dB. What’s more, you can change the display setting to tell you how long you can safely listen to the current output without posing a danger to your ears. I know it’s a little bit nanny-ish, but at least it makes you think twice. Meanwhile, a little signal bar at the bottom shows you when you’re pushing your headphones too far and you’re in danger of clipping. When the bar goes too far, just dial down the volume and you ensure that you’re getting the optimal sound.


And that isn’t all the EAP03 can do. First, there’s a switchable 3DX soundfield expansion mode, designed to replicate the more open sound you might get with a pair of stereo speakers by crossfeeding some of the sound destined for the left ear to the right, and visa versa. Secondly, there’s a three-band parametric equaliser, where you can customise both the frequency for the low, high and mid EQs and also the gain levels applicable. Thirdly, the EAP03 has a built in mic, allowing you to both measure the level of background noise in your environment and – more usefully – feed the ambient noise into your headphone input. Imagine you’re on the train or in-flight and the guard/flight attendant shows up. There’s no need to drag your IEMs from your ears so you can hear them – just press the MIC button on the EAP03 and you’re away. 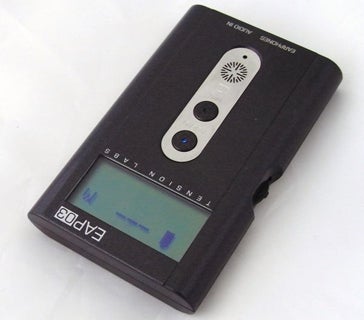 Of course, none of this would matter if the EAP03 dished out a mediocre sound, but it’s actually a very capable little amp. There are, however, some caveats. For one thing, the EAP03 is designed to be used with a headphone output, not an iPod line-out dock connector. While you can use the Amp Gain function to set the volume levels, you’re supposed to use the volume controls on your player. In practice, I got a better sound using a line-out dock and adjusting the Amp Gain to suit, but this means the dB readings on the EAP03 become inaccurate, while you need to visit the settings every time you want to change the volume. Secondly, the EAP03 isn’t designed to power demanding, high impedance, full-sized headphones.


The Earphone Sensitivity setting only goes down as far as 100dB/V, and you’ll need to push the Amp Gain quite hard to get a good sound from, say, the BeyerDynamic DT770 Pros or AKG K701s.In point of fact, I could get a very respectable sound from the DT770 Pros I have here, but if you want something to run full-sized phones efficiently, you might want to look elsewhere.

Otherwise, your mileage may vary. I used a set of Klipsch Custom 2 IEMs and a set of Denon AHC-551s, and got decent results from both. With the Custom 2s I definitely experienced a richer sound, more definition and a wider soundstage than I get with my 2nd gen iPod touch straight from the headphone output, with particular gains for more electronic music (Bat for Lashes’ Pearl’s Dream, Massive Attack’s Inertia Creeps, Justice’s floor-filling DVNO) and rock (Pearl Jam, Mastodon, Audioslave). It also helps that you can use the EQ to patch the weak points of your IEMs – in the case of the Custom 2s, a less than crystalline high-end. To my surprise, the EAP03 wasn’t thoroughly outclassed by the iBasso D2, either. Sure, the D2 offers a crisper low-end and a bit more definition overall, but the EAP03 provides equivalent power and presence. 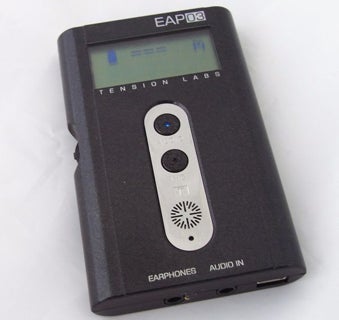 With the Denon ‘phones there was less to choose between the two portable amps; in both cases, you get more punch and a greater sense of space than you would with the standard headphone output, and a far better sound than you’d expect from such relatively cheap earphones. Just be aware that the 3DX option gives you markedly different results depending on both the earphones you use and the type of music you play through them. I’ve had everything from no difference to more realistic sound to a total mess during testing, which led me to switch the option off after a while.


Speaking to Gordon, who has also been trying out the EAP03, it appears you can also expect great things from the Etymotic ER4s and HF2s, with the EAP03 providing a more exciting, powerful sound from the already clean, well-balanced IEMs. He also rates the EAP03’s efforts with the Shure SE310s, citing enhancements to overall fidelity.


As you might expect, the D2 does more for demanding, over-the-ear headphones, pumping a richer, more energetic sound through the DT770 Pros and a pair of Grado SR125is than the EAP03, but then that’s not really Tension Labs target. 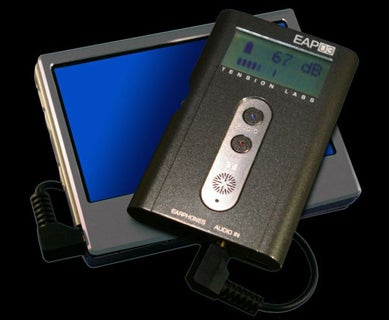 However this – and the price tag – means that if you’re in the market for a headphone amp, the choice is a difficult one. Those looking for a decent boost in performance from low to mid-range earphones and IEMs should still look at FiiO’s bargain-tastic offerings first, and the iBasso is still the most versatile headphone amp around, providing great portable sound, better support for full-sized headphones plus an external DAC, along with better battery life than the EAP03. If, however, you’ve invested £100 or more in IEMs and you’re prepared to invest another £160, then you’ll be pleased with what you get from the EAP03. It’s a good product, and with a little more work could be a great one. What’s more, it might just help save your hearing for many years to come.


The EAP03 is targeted at a niche market, and so it’s not the most versatile of headphone amps, but if you want optimal sound from your IEMs and access to a range of useful features, then the Tension Labs unit is worth the sizable outlay.