The problem with tennis is, it’s really hard. That’s a sentiment almost every British player over the last 50 odd years would firmly agree with – all until Andy Murray came along and, you know, started winning things. Even then, the sheer stress involved with taking part in major tournaments where matches come thick and fast in a short space of time is a feeling that translates particularly well to mobile.

That’s not because tennis is an easy sport to replicate on mobile devices – as Tennis Champs Returns proves, quite the opposite is true – but rather because the sense of frustration Murray and other pros must encounter when they lose a tight match has much in common with the anger that takes hold of gamers who come unstuck in their own tennis tournaments thanks to slippery touchscreen controls. As such, serving up a new, fresh way of controlling play is what Tennis Champs Returns puts front and centre, though sadly it’s not entirely successful in that venture. 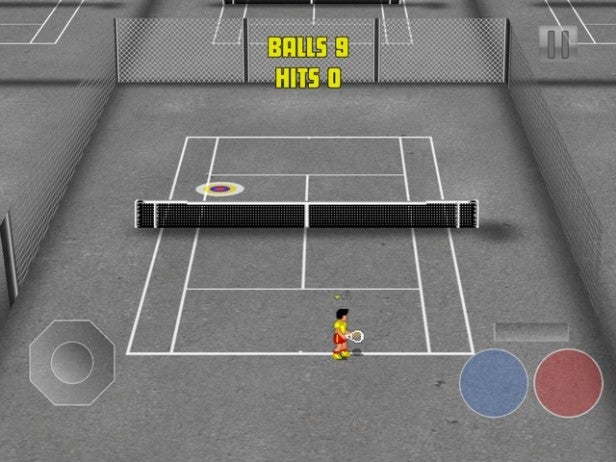 Tennis Champs originally made its mark on the Amiga many decades ago. As such, the game adopts a pixel-art style that’s commonplace amongst retro-style iOS releases, with menu systems that do more to tap into games of old than they do anything particularly interesting in the present.

Before you can get going, however, the game takes time out to teach you the basics – from serving to returning, to even moving around the court. It’s here that the game’s twist on the standard control system comes into play. As well using a virtual thumbstick to control your movement, the game also employs two buttons to hit the ball – one for a standard, slow shot and another for a pacey but risky return. It’s up to you to decide which shot to play, although, somewhat confusingly, using said buttons also takes care of some of the running for you when returning, with the thumbstick then solely taking control of where the ball lands if it makes it over the net.

On top of this is a separate power system: the idea being to lift your finger from whichever shot button you opt for when two bars meet in the middle of a little pop up gauge. It’s a rather confusing system to describe, though thankfully in practice it all comes together to make some sense. That doesn’t mean that mastering it is simple, though, as Tennis Champs Returns suffers from the same problem that has dogged almost every tennis title on smartphones; when the action gets heated, the tendency for your fingers to slide across the screen remains as likely here as in any other in the genre. 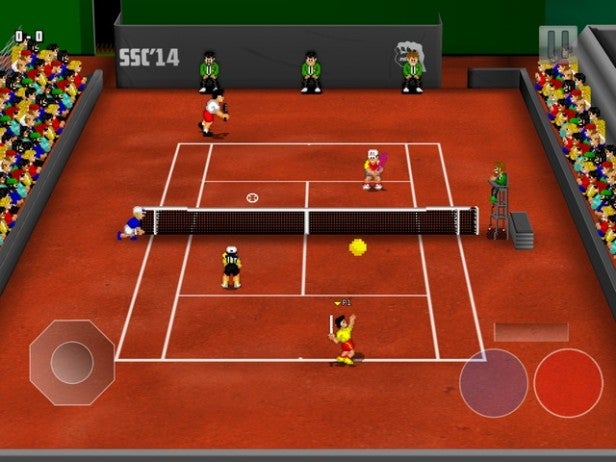 Seemingly in that knowledge, the developer has decided to break the action down into short and sharp nuggets of play. Taking part in the tournament in career mode, for instance, delivers a succession of tie-breaks rather than full on matches for your opening run, capturing the spirit of the game if not delivering it in its entirety until far later.  What’s more, as things stand you can only play as a man, with women characters said to be on the way in a future update.

This lapse, however, is indicative of just what Tennis Champs Returns represents as a whole. On the surface, it’s a consummate tennis sim with one off matches, a full on career mode and daily challenges all on offer, along with a control system that promises to do away with the problems that always dog smartphone tennis sims. In practice, however, the games themselves are a little too light to stand on their own two feet and the control system, though in no way a disaster, isn’t quite the simplistic revolution it bills itself as. As with many tennis sims, Tennis Champs Returns has much promise but is an imperfect experience as it stands on the App Store today, offering a glimpse of a new way of doing things but clipping the top of the net as it flies through.

Verdict:
Promising a fresh take but, in the end, falling foul of many of the hazards that hold tennis sims back on iOS, Tennis Champs Returns is no disaster but a slightly complicated control system and a generic approach to the rest of the games mean this isn’t the big event it should be.