There’s something we’ve never been able to understand about Western movies. What’s the point in a game of quick draw? Why wait for your rival to walk to the other end of the street before shooting them? Why not have a pop at them when they’ve got their back to you and they’re completely unawares?

Putting my reservations aside, there’s something about clearing a level in Tempo that makes us believe we would have made a pretty decent cowboy. Though set about as far away from the Wild West as you can imagine – the streets of London serving as the home for this Spooks-on-speed adventure – the gameplay actually has much in common with the art of quick draw. Both are games focus almost solely on your reaction time, with Tempo testing just how speedy your are over again. And again. And again.

The plot is almost as fast paced as the games themselves. A seedy American megalomaniac by the name of Moloch has taken over London, shutting down its security and defences and spewing his own men across the capital to take charge. It’s your job to reclaim the city’s streets, zone by zone, charging into each area and clearing it of all assailants in quick time. 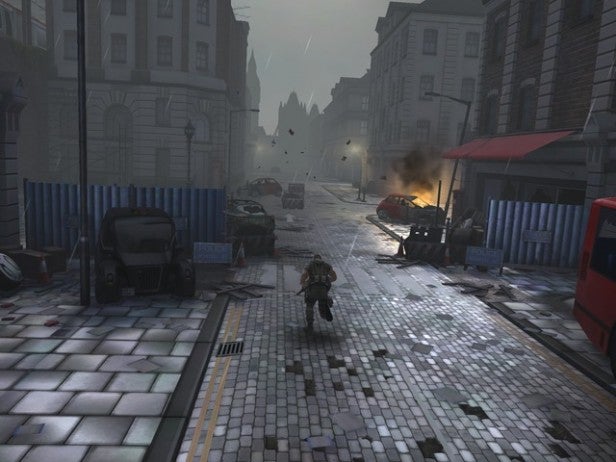 And ‘quick’ really is the word. Each level tends to last less than a minute – most come in at under the 30 second mark, in fact – with the clock counting down as you face a series of quicktime events (or QTEs) one after the other. These events, however, fall into three set categories, with the bulk focusing on taking out enemies with your gun. With a target placed over each rival, the aim is to tap the screen when an ever-decreasing circle enters a thin, yellow zone. Hit too soon, and the screen will flash red, losing you vital seconds in the process. Get your timing right, however, and you’ll be awarded a ‘perfect’, with a string of these top marks needed to progress through later levels.

Other events include tracing out a set path with your finger in quick time – used to navigate through tricky areas, disable automated sentries firing on your position or disable land mines – or simply tapping on the screen at pace, which is routinely used to break through barriers or fend of enemies in hand to hand combat. Piece a few of these together and dress play with some especially impressive 3D visuals and you’ve essentially got a level in Tempo, with the game ramping up with each stage that passes. Think it’s easy enough scoring one perfect shot under pressure? How about having to tap in time two or three times in as many seconds? 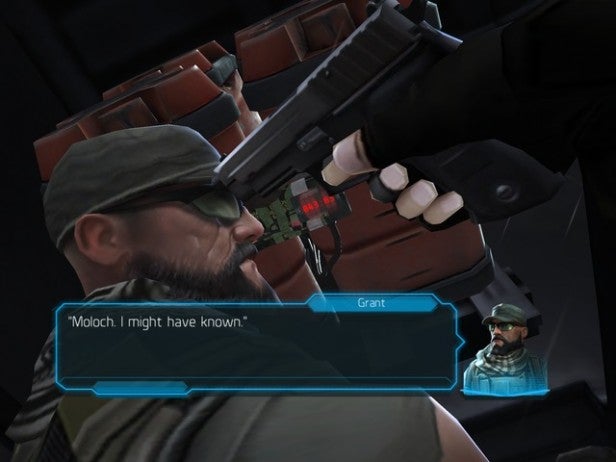 Increasingly, spare time is kept to a minimum in each stage, meaning that getting to the end of a level – rescuing a member of your team, diffusing a bomb, or sometimes even both – is a question of either not putting a foot wrong, or using the cash you earn in play to unlock bonuses to extend the level time or increase your accuracy.

Even with such trinkets unlocked, Tempo never gives you all too much time to think. Levels are over in the blink of an eye, the plot moves forward to unlock a new part of London, a new character lands in your arsenal and you’re onto the next stage. It is the perfect example of how to successfully condense an epic adventure for the mobile era; the action has been filleted, covered in breadcrumbs and baked to deliver some tasty morsels of play which, despite their short and snappy nature, never feel like too light a snack. 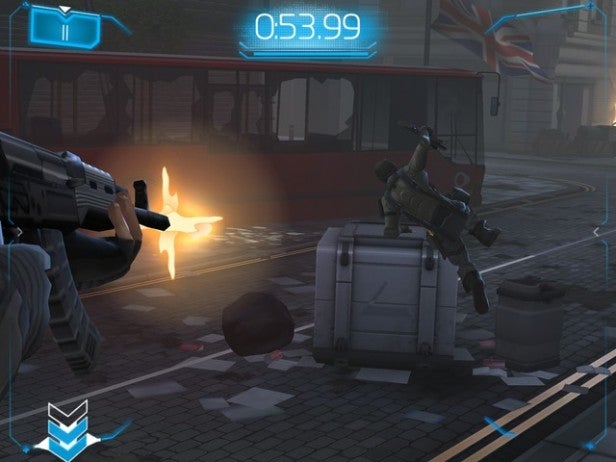 Instead, Tempo stands as a bona fide three course meal, drip fed to the player in such a way that just having “one more go” at a failed stage or moving on to play the next stage feels like no great commitment given the intentionally concise nature of the challenges. It’s no exaggeration to suggest that the folks at Warchest Games have pulled off a masterstroke here, proving that you can grip an audience and pull them through a complex plot without weighing them down with lengthy cut scenes or hour long stages. If setting a new benchmark in the action adventure genre was Warchest’s aim, then Tempo is very much on target.

Verdict
Stunning visuals and an engaging plot are only half the story with Tempo, with the game’s quick-fire action standing as the perfect example of now to deliver an epic adventure on mobile without weighing the player down with cut-scenes and convoluted action sequences.