Available on PS4, Xbox One, PC

Jeff Minter’s 1994 Tempest 2000 was the grandfather of the retro arcade remake, recreating and enhancing Atari’s pioneering vector graphics classic, Tempest, with new twists to the gameplay and the most astonishing psychedelic graphics. You won’t find many gamers of a certain age without some affection for the title, or its legendary British designer. But can that affection spread to Tempest 4000, a new sequel released nearly 25 years on?

Of course, fans of Minter – or the PlayStation Vita – will soon realise that Tempest 4000 isn’t exactly as new as all that. It’s effectively an Atari-approved 4K update of the 2014 spiritual sequel, TxK – itself a kind of Tempest 2000 with knobs on. This isn’t necessarily a problem, as TxK was, and still is, great. However, if you’re looking for a game that stretches the Tempest formula further, you might go away mildly disappointed.

Tempest was one of the first truly 3D games of any kind, using revolutionary vector graphics in a three-dimensional riff on Space Invaders, where your ship hovered at the edge of a tube, with the aliens moving down it to get you.

Ingeniously, you could move all around the tube, holding left or right to continue moving, tapping the fire button to send out volleys of destructive shots. It was a game of daring, sweeping moves and lightning-fast, last-minute dodges. 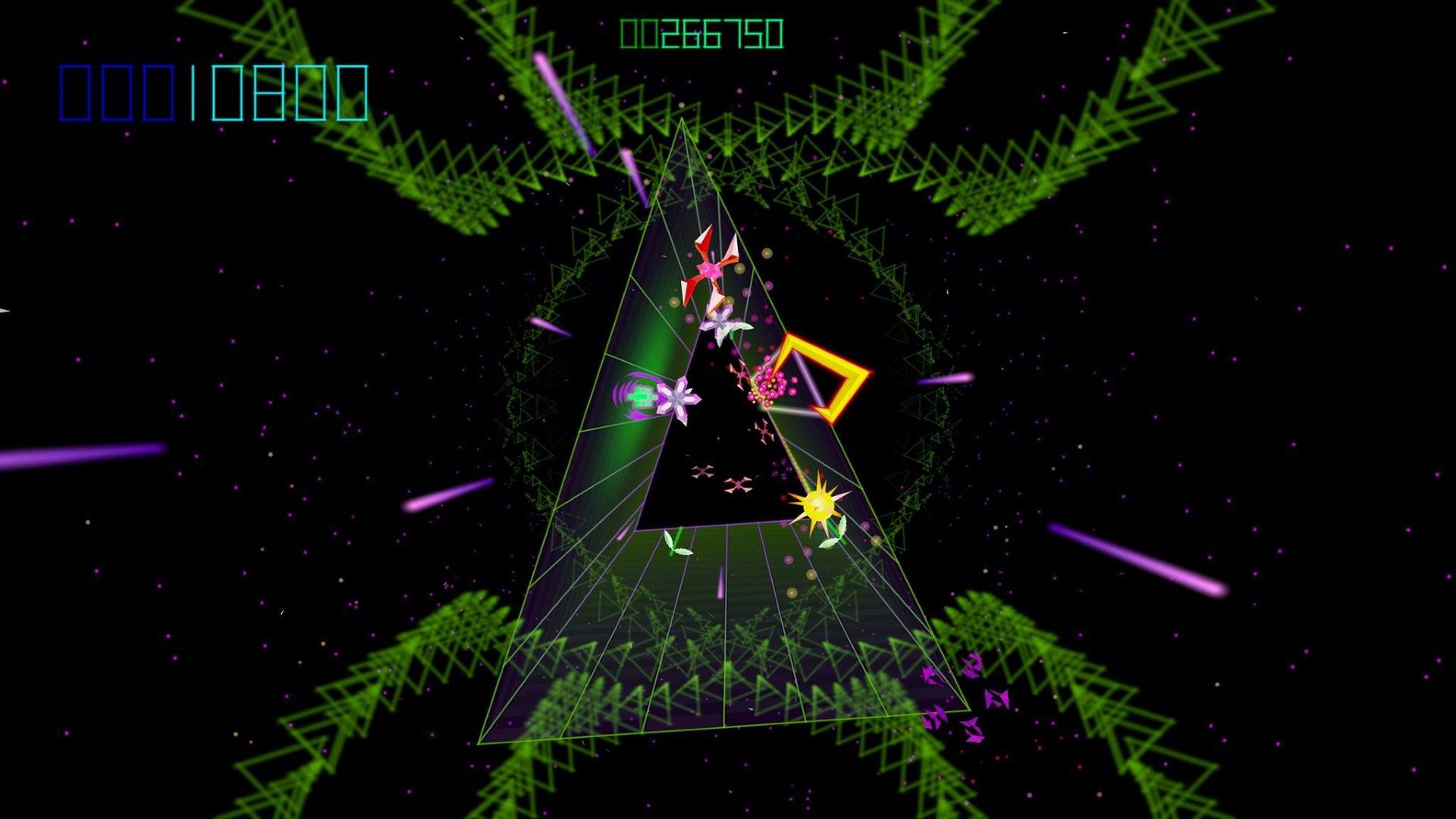 Tempest 2000 changed the formula by switching the tube for a selection of different extruded shapes, each one bringing in new challenges, along with the occasional new alien threat. It also introduced power-ups, boosting your destructive capabilities with more firepower, AI wingmen and edge-clearing spikey balls.

Most of all, though, Tempest 2000 transformed the retro arcade game by mixing up the colour palette and amping up the psychedelic fireworks and crazy neon-light effects. The original Jaguar version and subsequent PSX and Saturn ports were hugely influential on a whole generation of indie designers who were rediscovering the magic of the classic arcade titles. You can trace the line from Tempest 2000 through to Geometry Wars, and from there to Resogun and Housemarque’s other eye-searing PS4 hits.

Tempest 4000 is basically more of the same, only tweaked. It’s paced more aggressively and polished to something near-perfection. It feels like it belongs to the 1990s, with its blinding visuals and pumping house and trance soundtrack – but it’s still a potent adrenaline rush. It’s all about resisting panic, spotting patterns and coping with the challenges of moving around different 3D spaces, sometimes in quite counter-intuitive ways. 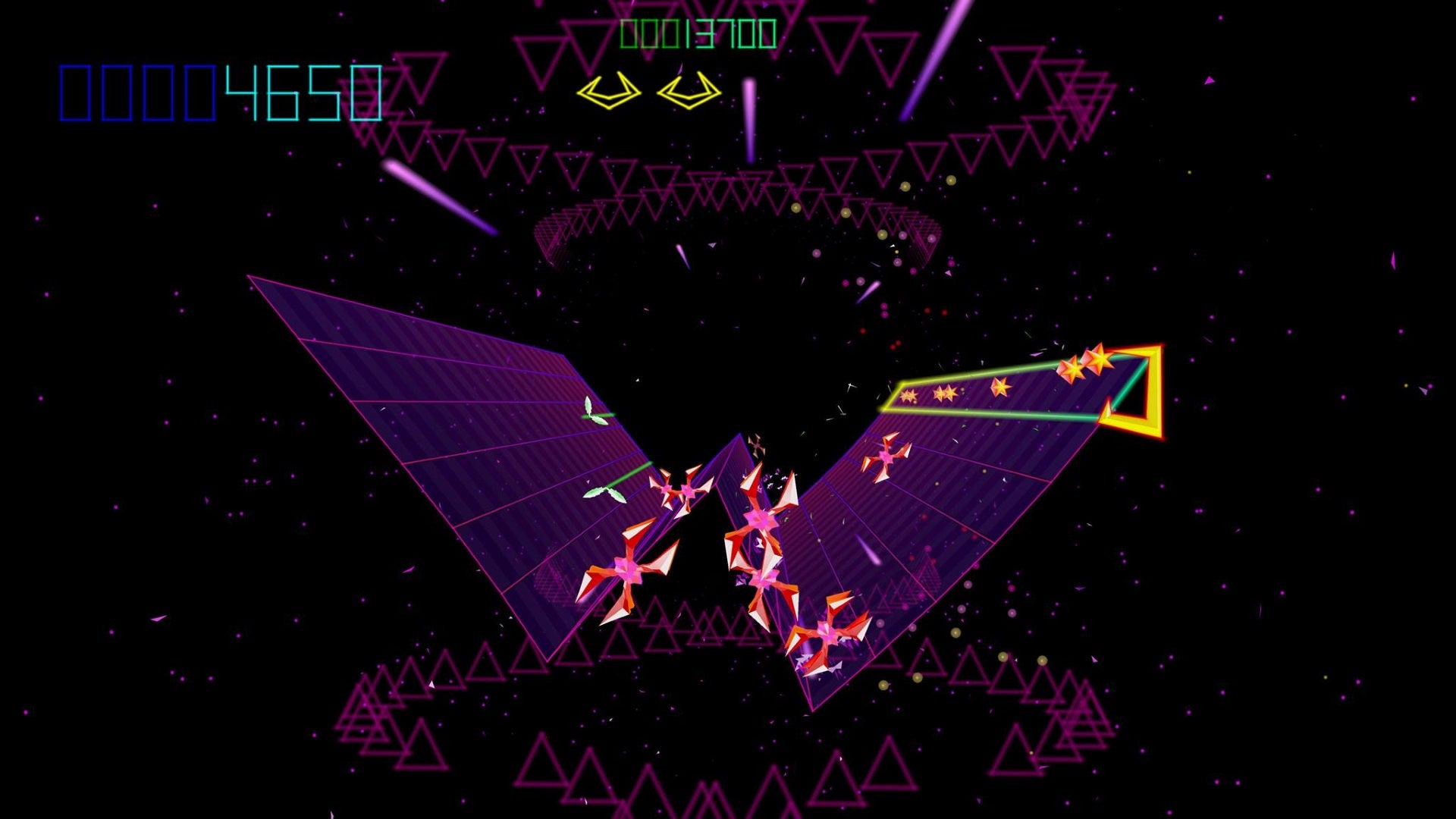 It’s also a game full of risk and reward, where power-ups can transform you into a blur of bullets and instant alien death, but where a split-second shift too far to the left or right can mean the difference between a dead alien and another life down the drain. Tempest 4000 requires both getting in the zone and being able to think tactically – and that’s not as easy to pull off as you might think.

It’s hard, too. I mean, really bastard hard like you wouldn’t believe. Play in Pure mode and you have three lives to get as far as you can, with all the odds stacked against you. Play in Survival mode and you get more lives, but you can still lose a ton of them in a few seconds of dumb or inattentive play.

The game is at its most forgiving in the Classic mode, where you can at least restart on any level that you’ve already reached, with the most lives you’ve ever reached it with. This gives you a chance to crack the level before you come back for a better run.

To be honest, it isn’t an instant hit. Even as someone who’s played Tempest before, it took a while before the action started to click. Once it does, however, it isn’t long before it’s furiously addictive. It’s good, then, but I’m not sure it’s another stone-cold classic. The visual style that once seemed awesome and unique has become something of an indie game cliché, and the soundtrack got on my nerves after a while. And while nobody does trippy flourishes, surreal references and weird superimposed statements quite like Minter, Tempest 4000 no longer looks or feels all that special.

Strong as the gameplay is, I’m not even sure it’s as exciting or progressive as, say, Housemarque’s collaboration with Eugene Jarvis, Nex Machina, or even Minter’s own PSVR effort, Polybius. Nor has Atari helped with a frankly nutty £25 price tag – roughly £10 over the going rate for this kind of thing.

Tempest 4000 is a great version of a classic arcade shooter. If you want to see why so many retro gamers rate Tempest so highly, then this is a great – if expensive – way to find out.

Yet Tempest 4000 is also the least revolutionary variant of Tempest, and arguably the first to feel less than essential. It’s a high-class psychedelic retro shooter, but no Resogun or Nex Machina.