Available on PS4, PC (both versions tested)
Perhaps it should have been obvious. What else could a collaboration between Sega and Game Freak – the team behind Pokemon – have resulted in, but an action-heavy 2D platformer where a rampaging, Rambo-styled elephant strikes back against hostile invaders. What could be more logical, predictable and not in any way bizarre than Tembo: The Badass Elephant?

This is a glorious throwback not just to the glory days of Sega platformers – and specifically Sonic the Hedgehog – but to the era when the PS2 and Gamecube ruled the console roost, and the likes of Capcom could find an audience for their wildest and most imaginative concepts. Tembo reminds me of Capcom’s Viewtiful Joe because it has a similar, distinctive cartoon style, but also because it shares its leftfield sense of fun. It’s a game that starts off silly and bombastic and only gets siller and more bombastic from there on in.

The concept is, of course, paper thin. Tembo is some kind of hardcore, military elephant. A bunch of purple goons have invaded his homeland, and Tembo’s not going to take it lying down. It’s up to our peanut-loving pachyderm protagonist to race from left to right through a series of levels, smashing into, onto and through any enemies that get in his way. Along the way he can earn extra points for rescuing civilians. It’s the old arcade classic Green Beret mixed with Sonic mixed with Viewtiful Joe and Rayman Legends. It’s an odd formula, but more successful than you might suspect.

That’s because while Tembo might be big and bulky, he’s not exactly short on killer moves. These include a nifty high-speed charge, a fearsome uppercut, a beefy ground-pound and a Sonic-esque spin, all of which can wreak destruction on the scenery and anyone unlucky enough to be standing behind, on or under it. This is really what Tembo brings to the 2D platform table; a kind of high-speed, mass destruction that the genre hasn’t really seen before, where buildings topple, elephants crash through the floors of skyscrapers and men and tanks can be knocked over like nine-pins – with a bowling ball if necessary. This badass elephant scores high for anarchic fun. 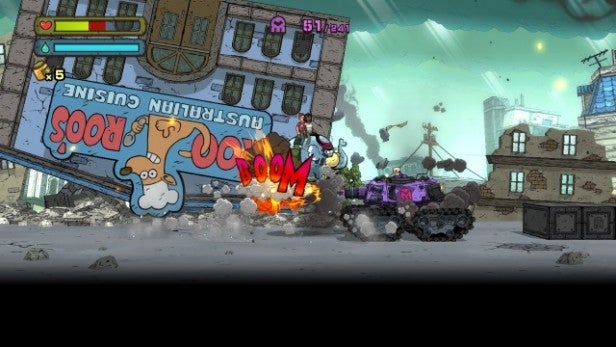 He controls well, too, again reminding you of Sonic with his sense of momentum and inertia, though with flashes of Nintendo’s Yoshi in Tembo’s targeted use of water and last-ditch hover at the end of every long jump. The slightly bewildering move list becomes second nature pretty quickly, though you’ll occasionally find yourself struggling to pull of an uppercut or duck-and-slide move with precision every time.

There are some neat mechanics in here too, with larger enemies that require more complex strategies, plus explosive crates to hit you hard if you try to just charge through. There are flames that need to be doused with water from your trunk, and seeds which sprout into platforms or jump pads. Some sections work like puzzles, asking you to think about which bits of scenery need to be knocked down in which order. Tembo isn’t nearly as dumb as it looks. 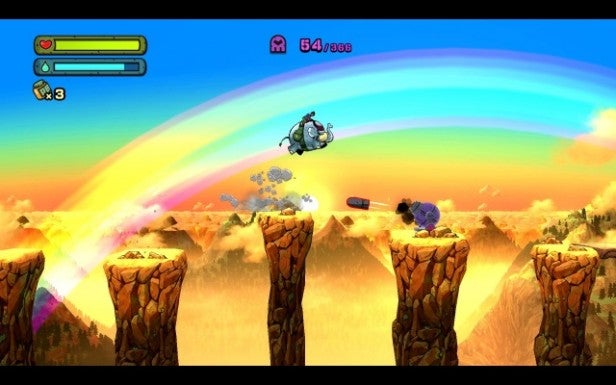 But then it looks pretty amazing much of the time, combining 2D cartoon visuals with sophisticated 3D elements, and coming up with some satisfying scenes of scenery-wrecking. Cut-scenes are short, funny and to the point, while the bombastic score echoes every action film you’ve ever seen. This isn’t some quick budget knock-off, but a game that has been put together with real attention and affection.

Unfortunately, it’s spoilt by one clumsy decision. Like some recent Nintendo platformers, Tembo doesn’t let you race through its levels, but requires you to collect points by downing enemies and rescuing friends before you can unlock the fourth level in each sector. This is trickier than you might think, with enemies and civilians hidden away in hard-to-find places, and while the game wants you to explore and discover its secrets, having a limited number of lives and only so many checkpoints might persuade you otherwise. To make things worse, you have to collect a pretty hefty percentage of the available points to win through. As a result, you’ll probably have to have several cracks at the first three levels just to open up the fourth level and subsequent boss battle, and the same goes when you reach the next sector. 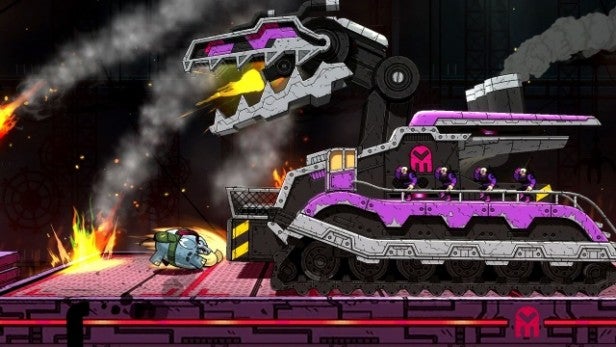 This doesn’t wreck Tembo, but it makes it more repetitive and grindy than it might otherwise have been. When Nintendo does this, it has the sense to engineer things so that you can knock off a good half of the game before you need to repeat anything, at which point you feel equipped to return and tackle old levels with new skills, more confidence and a little enthusiasm.

Having to play the first three levels once then tackle them again straight afterwards isn’t quite so much fun, even if it does extend the lifetime of the game. Later on, this only gets more aggravating as overpowered baddies and insta-death traps and drops leave you relieved to have made it through a section, only for you to realise that you’re going to have to tackle it again to hoover up those missing points.

Tembo succeeds despite this weakness because it’s as charming, boisterous and generally unstoppable as its elephant hero. It’s no epic, and not on the same level of invention or imagination as a New Super Mario Bros. U, Rayman Legends or Yoshi’s Woolly World, but at it’s budget price it doesn’t need to be. One poor choice halts Tembo on his headlong rush to greatness, but where he ends up is still a pretty good place.

Verdict
Tembo’s style, pace and emphasis on mass destruction sets it apart from other 2D platformers, and it’s almost an elephantine four tonnes of fun. While the need to replay levels to harvest points can transform it into a grind, this badass pachyderm’s infectious energy gives him irresistible force.