Available on PS4 (version tested), Xbox One and PC
Telltale Games has become a household name in the hearts of modern gamers. By covering an endless array of beloved films, comics and television shows, the talented studio has effectively created a new form of adventure that puts player driven storytelling at the forefront. In many ways, this all started with 2012’s The Walking Dead. Clementine’s emotional debut was exceptional and still holds water all these years later.

A New Frontier continues the journey of Clementine while introducing compelling new characters we’ve come to love throughout the opening three episodes. Javi is an excellent protagonist. Flawed, caring and always handy in a fight, his troubled past is substantial enough that every word of his feels far from inconsequential. The penultimate episode of The Walking Dead’s third season is the best yet in terms of dramatic characterization, often surpassing its hugely popular TV and graphic novel counterparts. 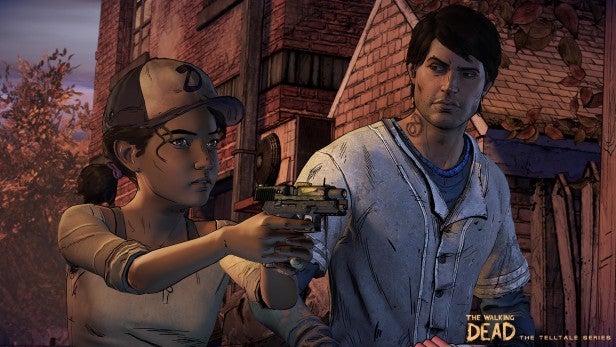 Unfortunately, Telltale has done a poor job of creating a world worth caring for beyond its excellent cast. During the last episode we were introduced to the troubled town of Richmond. Run by a dangerous group known as The New Frontier, Javi and friends quickly find themselves between a rock and hard place. The rock, in this case, being a horde of decaying walkers clawing at the gates. They must escape or form a translucent alliance built on murderous betrayal.

Thicker Than Water does little to flesh out this struggling stronghold, rushing us into an ultimatum that lacks any real substance. Why should we care about the fate of a town we’ve spent only a few minutes exploring. Its inner politics and societal dynamics are hardly touched upon in this latest episode. Joan, the main antagonist, is meant to appear as a scheming, double-crossing dictator. But we never get to analyse the world she rules over, so why should I believe in anything other than my close-knit group of friends?

Javi and Clementine’s relationship is expanded upon with some cute, touching moments. One such scene has Clementine tending to Javi’s wounds in a dimly lit doctor’s office. All of a sudden Clementine brings up puberty, of all things. It’s an embarrassing confession that feels honest as Javi awkwardly offers advice he has no place in giving. To me, this reflects how Lee clumsily held her hand in the first season. A man who found himself thrust into the role of a father amidst a battered, broken world. 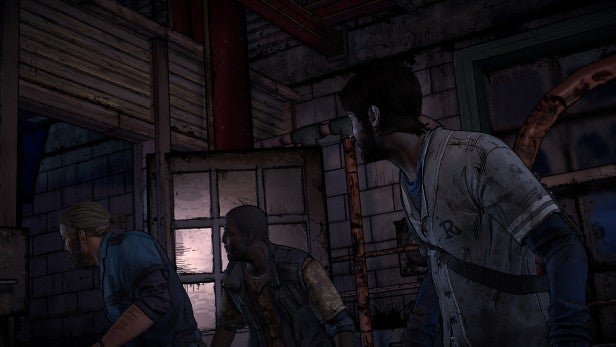 Clementine’s character as a whole is put to brilliant use throughout Thicker Than Water. Telltale has finally wised up to the fact that many players will subconsciously side with her no matter what. We’ve known her for years. Every single decision she makes is defined by a life spent fending for herself. She’s lost people, and her inability to trust Javi at first is perfectly justified. After all, being forced to grow up in a world where death awaits around every corner can’t be easy.

Despite its painfully slow opening minutes, A New Frontier’s fourth episode sets the stage for a tense finale. By subverting what we’ve come to expect from Telltale’s formula the stakes have never felt higher. I won’t spoil the big twist here, but one decision had me yelping at the screen in surprise as I had the rug suddenly yanked from beneath my feet.

Instead of one monumental player choice, we are thrown several in a matter of painful, blood drenched seconds. Javi and Clementine are at the centre, and I wanted nothing but to protect them. This didn’t stop the moment-to-moment action from feeling stale and repetitive, but it did throw a wrench into the works of a tale that desperately needed it.

The Walking Dead’s third season has been a consistently exciting ride thus far. The town of Richmond lacks depth and direction, gracefully pulled through by some fantastic character moments. Javi and Clementine make for two likeable leads, bolstered by a supporting cast I inevitably came to root for. Except Gabe – he’s the literal worst.

A New Frontier’s final episode could go out with a bang or sizzle into a cauldron of mediocrity. If executed well, Javi’s swansong could be something special indeed.