Telltale Games has created its own lucrative niche in the market. It grabs the wet clay of a major licence (The Walking Dead, Game of Thrones, Batman) and pushes it deftly into a mould of its own video game creation: an episodic narrative adventure, light on puzzles and action, but big on choices that feel genuinely meaningful – even if, in reality, the choices don’t lead to life-changing events.

For its latest bit of story-driven sculpture, Telltale has teamed up with Marvel to deliver an official Guardians of the Galaxy series. While it sticks closely to the tried-and-tested Telltale formula, judging by the first episode (of a projected five) it’s looking like another solid effort, and has the makings to be Telltale’s best work to date. 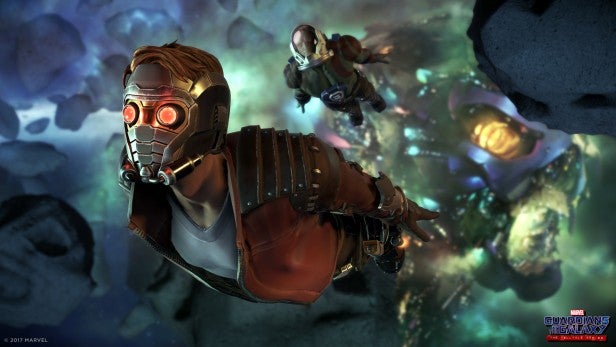 Given that the story is pretty much the reason for buying the game, I won’t delve too deeply into the plot and venture into spoiler territory of the first instalment, entitled “Tangled Up in Blue”. However, the general gist of the story concerns an extinct alien race, a god-like Titan (no prizes for guessing who that is, if you’re a Guardians fan), long-lost parents, and an artifact with a strange power that relates to all three of the previous. Naturally, knowledge of not only the Guardians movie but the Marvel Cinematic Universe would help improve your enjoyment of the narrative here.

The story unfolds nicely over the first episode’s two-hour run-time, with the usual Telltale mix of lightweight puzzles (essentially: look around this room interacting with everything until something advances the story), quick-time action sequences (press a specific button within three seconds to avoid being killed) and dialogue-based choices (for instance, “Which of my friends do I want to offend this time? This friend will remember my choice”) driving things forward at a pleasingly varied pace. Add to this, during a couple of sequences, the ability to use Star-Lord’s jet boots to explore upper reaches of an area, plus a time scanner that affords you a brief glimpse of recent events. 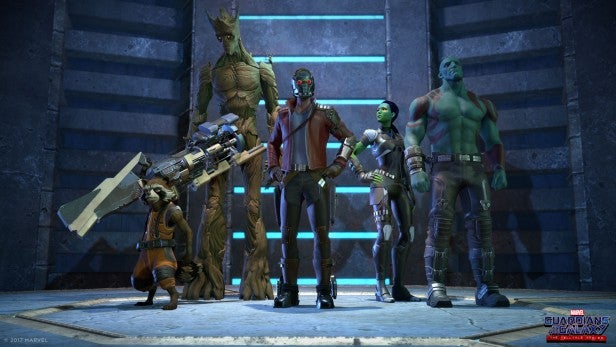 The Guardians and the supporting cast aren’t voiced by the movie series’ actors, but Telltale has assembled its own crack team of vocal talents, including Nolan “Nathan Drake” North as Rocket Raccoon, giving characters plenty of life. And while there’s the odd stutter here and there, animations are acceptably smooth and lifelike by Telltale standards. Add in the characterful comic book-style visuals and the licensed soundtrack (warning: you’re going to hear that one E.L.O. song a lot) and this might well be the best-presented game Telltale has made thus far. It definitely feels like a big budgetary leap above the past couple of Telltale titles (The Walking Dead 2 and Game of Thrones) I’ve played.

I’ll admit to being initially dubious about Telltale’s prospects of taking on these characters – who we already know well from the first Guardians movie and the comics – and involving them in a compelling story that doesn’t tread too heavily on the toes of the upcoming second movie.

After all, it’s pretty clear that none of the Guardians or any important supporting players are going to be killed off, which does somewhat lower the stakes of all the choices you make. In The Walking Dead, for instance, a bad call could lead to one of your group becoming zombie-fodder, but here the worst that can happen is someone’s nose being put out of joint (probably temporarily). 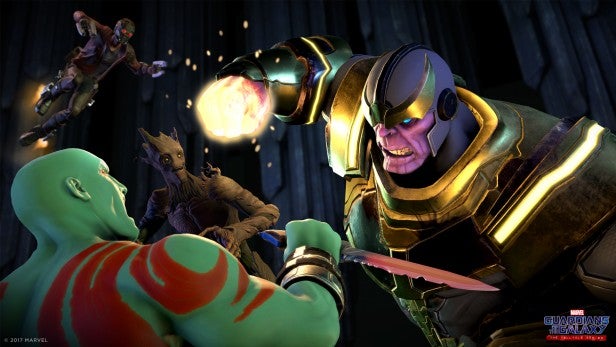 That being said, the first episode delivers enough sharp story hooks, entertaining action sequences and amusing lines that I found myself quickly sucked in, my reservations swiftly squashed; by the time it was over, I was looking forward to the next episode and finding out where Telltale is taking the Guardians of the Galaxy.