Phenomenal – if I had to pick a word to describe Tekken: Dark Resurrection, phenomenal is the one I’d choose. It would have been enough to be the best fighting game on PSP, but this is a contender for the best PSP game, full stop. Simply being a great handheld incarnation of Tekken is an achievement, but this is one of the best Tekkens on any system. It’s a game that makes all the usual cheap PSP ports look not just weak, but pitifully lacking in ambition.


Of course, it has been built on some pretty damn solid foundations: the arcade update of the best Tekken of the last eight years, Tekken 5. After the disappointments of Tekken Tag Tournament and the misplaced formula fixing of Tekken 4, Tekken 5 showed the series getting back to what it did best, throwing out showy multi-layer arenas and treacherous ground surfaces to just give us two guys or girls in a ring, each armed with a cart-load of wince-inducing special moves. And this being Tekken, the characters and the moves were hard-hitting, varied and superb. 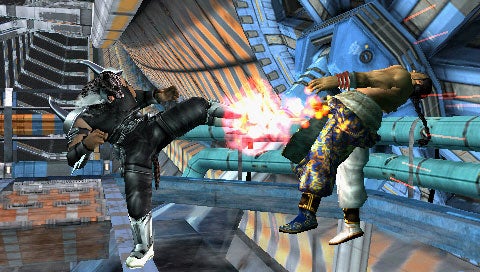 What’s so impressive about Tekken: Dark Resurrection is that it doesn’t feel like a watered down version of that Tekken 5 experience – in fact, you can safely argue that it’s been enhanced. You get a huge selection of play modes, and a vast range of over 30 characters to choose from, going all the way from old-school PSX-era heroes (Law, Nina, Yoshimitsu) through more recent additions (Christie, Bryan, Raven) to those weirdos that always creep out of the Tekken woodwork (Mokujin, Roger the Kangaroo). In a departure from usual form, all are available from the start, and Namco has even bundled in two new ones from the Dark Resurrection arcade game: Lili, a pampered princess with a taste for kicking ass, and Dragunov, a sinister pasty-faced Russian specialising in brutal high-powered combos. With minor exceptions, all are superbly balanced, and there’s such a wealth of options here that whether you favour power-combos, high-speed offense or sheer force, there will always be a handful of fighters to suit you. 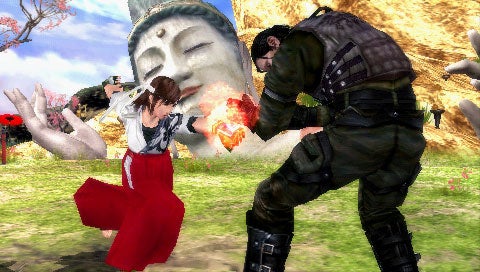 Even better, Dark Resurrection doesn’t look like a watered down Tekken 5. In fact, it’s hard to imagine how Namco could have got closer to the arcade or PS2 versions given the hardware limitations of the PSP. Somehow, using texture and lighting effects to mask the handheld’s relatively low polygon count, the Tekken team have produced something that, even under fairly close inspection, looks fantastic. The characters are beautifully animated, with flowing hair and wonderfully-rendered costume details, and while some of the arenas are fairly plain, with little going on beyond the actual fighting area, others have the intricate, multi-layered backgrounds we’ve come to expect from Namco since Soul Calibur. There are sunlit gardens and ruined Buddhist temples, grimy urban spaces and weird pink love palaces, plus rocky platforms with waterfalls behind, and – best of all – a nightclub dancefloor surrounded by sexy bikini-clad dancers. And across the board, the lighting is as good as it gets on PSP. 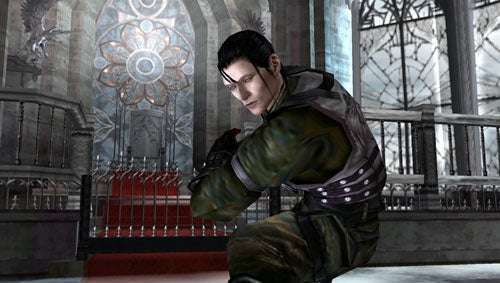 The audio efforts deserve just as much praise. I dare say the Tekken style of music isn’t to everyone’s taste, with its blend of heavy guitar, weird oriental noises and blistering dance beats, but Dark Resurrection doesn’t skimp on any of the listed ingredients. Meanwhile, the full range of grunts, roars, screams and the heavy smack of foot or fist on face is as good here as in the best Hong Kong fight flick you can imagine. It sounds utterly fantastic through bass-boosting headphones. 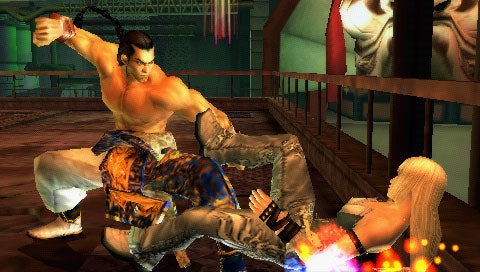 Yet none of this would matter if it wasn’t for one thing: Dark Resurrection plays superbly. The series’ strength has always been its relative simplicity: take two buttons for fist, add two for feet, then mix and match with the D-Pad to pull off moves and killer combos. It still works here, and whether you’re a dumb button masher or a combo-cutting ninja, it’s surprisingly easy to pull off complex moves with ease. For maximum dexterity you might want to play with the PSP on your lap, so you can hit all four face buttons with your fingers instead of relying on your thumbs, but most sensible Tekken players would say the same of the PS2’s Dual Shock 2 controller, and while it’s a little trickier to pull off any diagonals, this shouldn’t adversely affect your play too much. 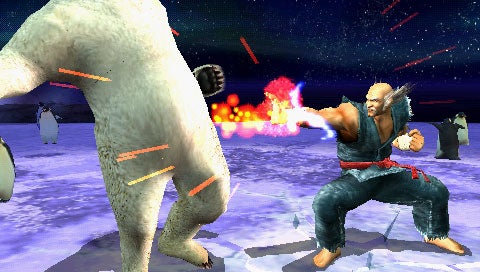 You may also be surprised to find this is a beat-em-up with hidden depths. Of course, you get the traditional one-player story mode, complete with cartoon intros, the mandatory bizarre storylines – time travel, curses, family drama and sibling rivalry a speciality – and neat CG endings (Anna’s being a particular highlight), but there’s also much, much more. The arcade mode, for example, simulates playing against a series of arcade challengers, with you struggling to hold on and climbing higher and higher up the rankings. More scope for battle comes courtesy of Tekken Dojo, where you work your way through the ranks of several themed dojos, and if you should get bored of that lot, you can always take time out with the bonus games, including a spot of Tekken-themed bowling. 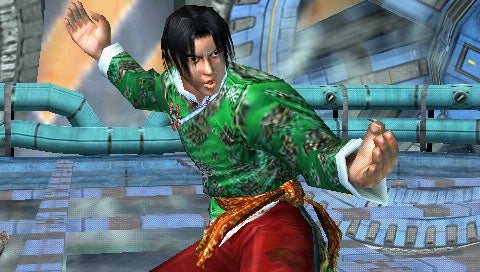 Nor has Dark Resurrection forgotten its roots as the classic before-pub, winner-stays-on beat-em-up. I’ll admit to some slight disappointment at the lack of real-time online play, but instead Dark Resurrection lets you connect up to upload and download packs of ‘ghosts’ which offer a snapshot of a given player’s character roster and play style. This network-friendly sharing actually gives you a reason to customise characters, and you can spend points earned in-game on their looks and wardrobes, changing colours, adding masks or hats, and altering hair styles or colours. I know, it’s sad, but I must admit it’s also kind of fun. And when you have some mates closer by, there’s always good old ad-hoc two-player action, and though I don’t think you’ll ever beat the experience with a gang of mates, a TV and a couple of four-packs of lager, this comes fairly close. 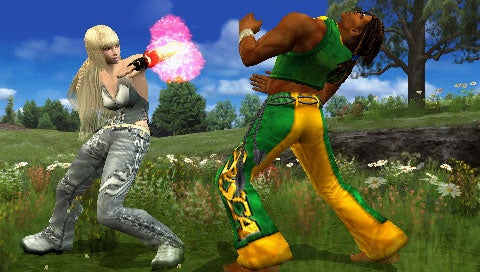 So there you go. Like Ridge Racer or Syphon Filter: Dark Mirror, Tekken: Dark Resurrection shows that you can have an established series hit the PSP without cludges or compromises. Not everyone likes beat-em-ups, and the Tekken name doesn’t sell systems like it used to, but if the idea of another run for the King of Iron Fist title even slightly appeals, this is one handheld offering that you really have to own.


The Tekken renaissance continues, with a masterful handheld effort that shows exactly what the PSP can do when pushed.