Part of the White Collection – a range of six coordinated food-prep appliances finished in glossy white and stainless steel – the Mastermix is no afterthought addition. By combining a mighty motor with its patented Tripl’Ax technology, which translates to six directional blades, the BL800140 promises a smooth blend every time.

The Mastermix’s 15 speeds plus pulse make it ideal for batters, milkshakes, cocktails and soups, while two automatic programmes for smoothies and ice crushing take the effort out of everyday tasks. The emphasis on convenience sits at the core of its design, as the jug splits for cleaning and all the detachable parts are dishwasher safe. 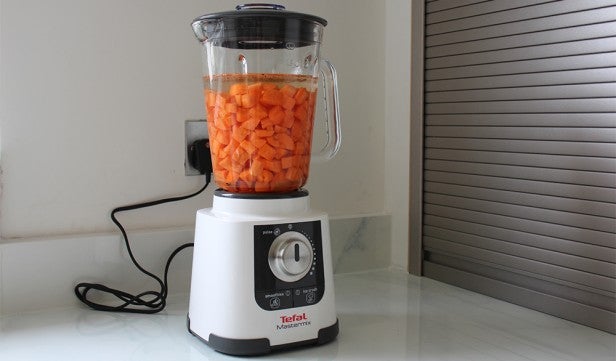 Fans of colourful appliances may find the exterior of the Mastermix lacking in excitement, but this minimal approach heightens the feeling that it’s a solid basic that won’t let you down.

Aesthetics aside, the more interesting design features relate to function. Peer into the jug and you’ll find what makes it special: two upward serrated blades that create a cyclone, so pieces of food aren’t left behind; two downwards blades to whisk up chunks from the bottom of the jar; and two horizontal blades that are sharpened and serrated to give a smooth finish.

The blades screw into a thermal shock-resistant glass jug, which allows you to blend hot soup and then cold liquids without having to wait for it to cool. 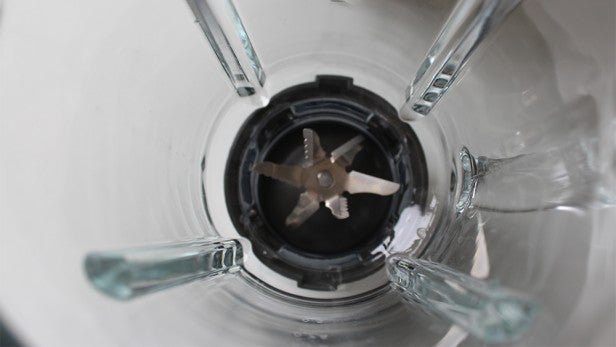 Its automatic programmes consist of a smoothie setting that ramps up speed, and an ice-crushing setting that’s a series of pulses to blitz said item without melting. Both need to be stopped manually, so it will still require supervision. Finally, four suction pads beneath help keep the blender firmly on the worktop. 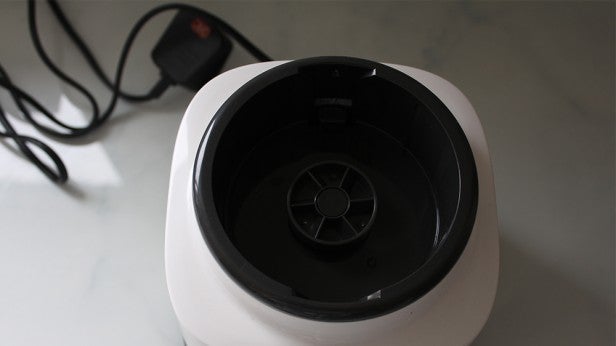 Before I could start to use the Mastermix, the jug needed assembling. The blade unit, gasket and glass jug combine to create a watertight seal, before the whole can be dropped onto the base. Not having to twist the jug into the base is a useful feature, plus it could be placed with the handle to the left or the right. A long power cable is also a plus.

I started by making a strawberry and banana smoothie with milk. Adding liquid to the jug first, I followed with the fruit. The lid of the blender pushed on, rather than twisted, so it was essential to make sure that it was firmly in place. 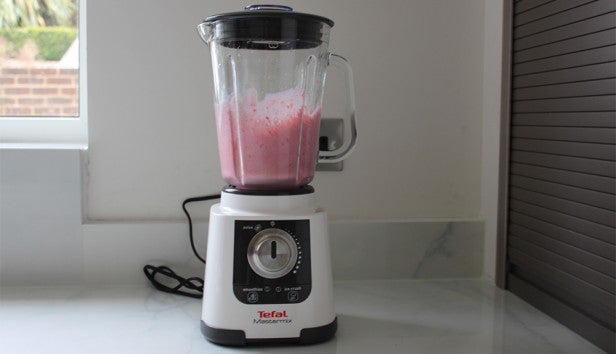 Selecting the smoothie programme button started the appliance immediately, with the blades quickly working their way through the fruit at a lower speed before cycling up to a faster speed that began to make the mixture a consistent colour. The programme needed to be stopped manually, by pushing the smoothie button again.

After about 20 seconds, the finished drink had no traces of the more fibrous fruit and was very smooth. A scraper would have been a useful accessory to be able to clean down the sides of the jug after blending.

Next, I tried making the only recipe provided in the instruction booklet: carrot soup with cumin. This required blending together the raw ingredients prior to cooking. While the Mastermix has a 2-litre jug, its max capacity is 1.5 litres for thick mixtures and 1.25 litres for liquids, making the quantities for this recipe just within the guidelines.

Adding small pieces of carrot and water to the jug, I selected the maximum speed on the control dial. While the appliance made more noise initially as it blitzed the carrot, this soon faded as the mixture became more thoroughly blended. After about a minute, it appeared to be consistent and foamy. The mixture tended to separate slightly as it was cooked, but the final soup was free of lumps of carrot. 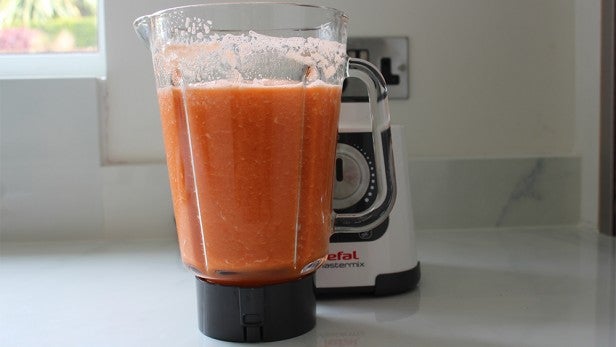 I finished by using the ice-crushing function with around a dozen ice cubes. Adding them to the jug and securing the lid, we started the programme. Bursts of a few pulses at a time followed by a pause began to chop the cubes into smaller fragments until they resembled snow. After about a minute, we stopped the programme.

While the consistency of the ice wasn’t entirely uniform, with a few larger chunks remaining, it was suitable for making drinks.

Cleaning was straightforward since all the parts of the machine could be popped in the dishwasher, and the detachable blades were easier to clean by hand than those at the bottom of a jug. 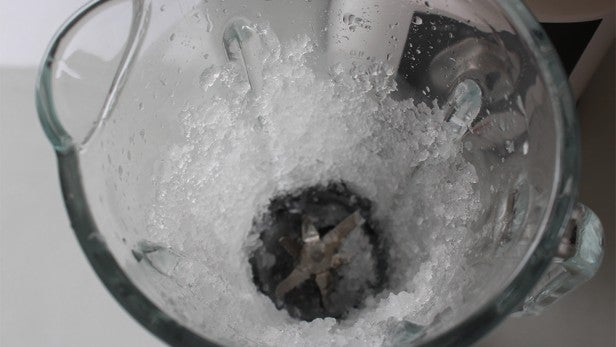 While it isn’t reinventing the wheel, the Mastermix BL800140 is an excellent example of a blender that, instead of cramming in multiple functions and extras, prefers to focus on doing one thing well – blending.

Given its power and features, it’s good value for the price. Also, its design is stylish enough that you won’t feel the need to hide it in a cupboard. The 1.25-litre liquid limit could be frustrating for keen cooks, but it’s a great buy for families and those who will mostly use it to make drinks.

A smart summer go-to for smoothies, cocktails and shakes.