What is the Tefal Cook4Me Connect?

Tefal Cook4Me Connect is a time-saving kitchen gadget. It builds on all the features of the original Cook4Me – a high-speed, hi-tech pressure cooker with around 60 built-in recipes – and adds app connectivity too.

The app makes it infinitely more useful than its predecessor. You can keep an eye on cooking via a smartphone and tablet, even if you’ve popped to the shops for a last-minute ingredient. But more importantly the app means you can add many more recipes – there are hundreds online ready to be sent to the cooker. 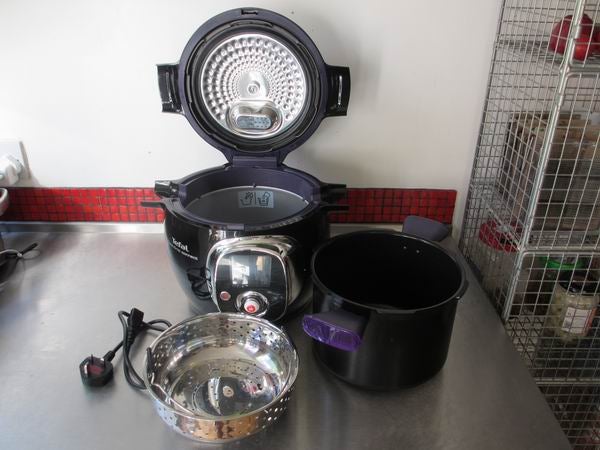 Overall, the Connect looks the same as its predecessor. It boasts the identical buttons and a colour screen, although in this model that panel has been upgraded to a touchscreen.

The Connect may be a pressure cooker – that’s how it serves up dishes faster than a conventional cooker – but from the outside it looks more like a slightly bulky rice cooker. And in fact, as well as complete dishes it can cook rice, steam veggies and more.

Like its predecessor, it comes with around 60 built-in recipes, but connect via app (iOS and Android) and you can choose from hundreds more recipes that can be downloaded to the Cook4Me Connect. The recipes tend to be simple ones: they’re quick to prepare and don’t require too many ingredients. 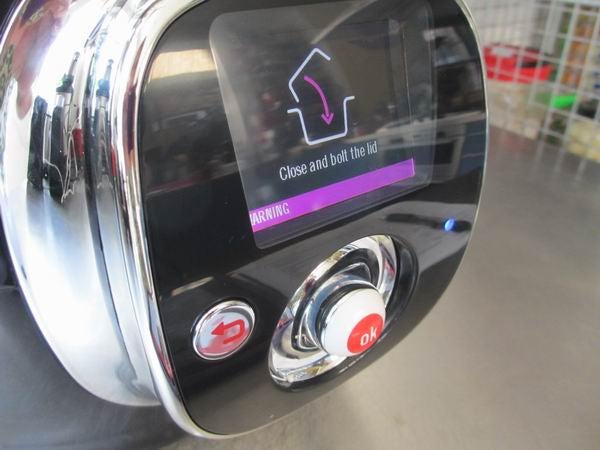 The cooker saves you time in more ways than one. The smart recipes talk you through how to cook the dish quickly and easily. And then, as a pressure cooker, it cooks significantly faster than if you were making the same dish in a saucepan.

More confident cooks can simply select ingredients and quantities if they prefer, rather than being led by a recipe.

The bowl is non-stick with a ceramic coating, and has cool-touch handles, and both the cooking pot and steam basket are dishwasher-safe.

There’s no slow-cooking mode – it’s supposed to be fast, remember – but you can fill it with ingredients in the morning and set a timer for your dinner to be ready on your return home from work. And crucially, if you’re delayed at work then you can control it via app to ensure your meal is cooked at your new dinnertime. 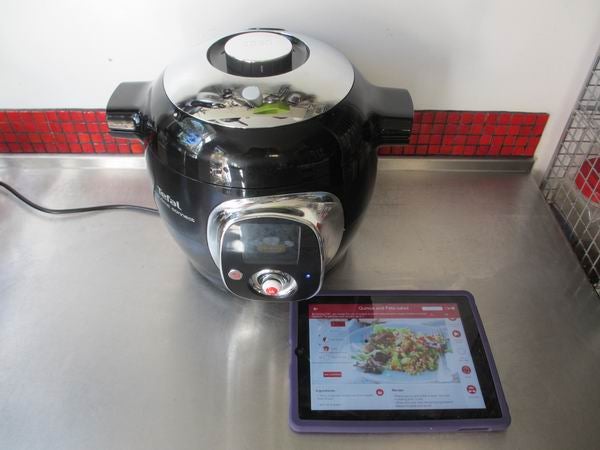 Tefal Cook4Me Connect – What is it like to use?

We started out by downloading the Tefal app to a second-generation iPad and then paired the Cook4Me Connect with it via Bluetooth. This was a smooth process, with the app talking us through each step. Instructions appeared on the Cook4Me Connect’s screen too – which was reassuring. You don’t have to be a technophile to drive this cooker.

Next we picked out a recipe from the hundreds available on the app: a quinoa and feta cheese salad. The app lets you filter recipes: for example, to select favourite or least-favourite ingredients. Novice cooks will appreciate that some of them also include video demonstrations. 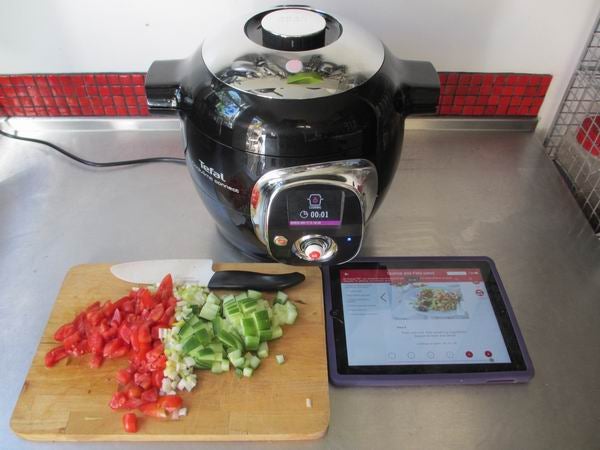 Before beaming the recipe to the cooker, we scaled it up to serve six people instead of two. The app automatically trebled all the quantities, doing the maths so we didn’t have to.

Cooking time is fast – but not as fast as it’s billed to be. For example, our recipe claimed that the quinoa cooking would take just five minutes, but the process actually took ten: four to heat up, five to cook and then another minute to decompress before we could safely open the machine, using the chunky knob on top. 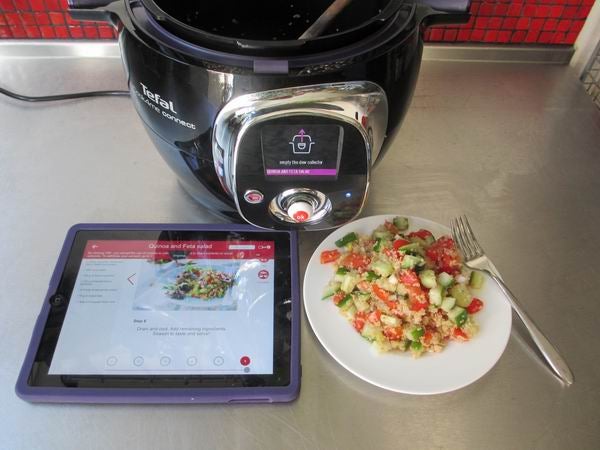 We were also annoyed that it played a cute digital tune to announce that dinner was ready before the one-minute decompression time. But the alerts sent to our app were great; we could supervise progress from the other end of the house.

In its defence, though, the Tefal was still quicker than cooking in a saucepan. And since it controls the cooking temperature, you’re left free to chop the remaining ingredients or do something else while it cooks. You don’t need to watch it. In fact, you can’t watch it. It’s sealed as it cooks.

The dish was cooked quickly and tasted good – although it was a little soggy. We’d use slightly less water next time. You can’t amend the recipes, but you can add notes to it via app on occasions like this. Should I buy the Tefal Cook4Me Connect?

Quite possibly. The Cook4Me Connect makes healthy food fast and it walks you through the recipes. So if you’re an unconfident cook who wants to wean themselves off a diet of ready-meals, sandwiches and takeaways, it’s well worth a look. The growing catalogue of recipes makes it infinitely superior to its predecessor. It is a bit bulky but really, our only major criticism is that it is expensive.

The features speak for themselves. If you’re unsure whether to buy it or not, download the free Tefal app and browse the recipes. If you see plenty of stuff you’d love to cook then go for it.

If you simply want the pressure cooker but don’t want app control and recipes then you could consider its predecessor, the Cook4Me, as you can shop around and save up to £90 on its original price. The more affordable Tefal RK302E15 8 in 1 Multi Cooker and Sage Risotto Plus are worth a look too.

The Cook4Me Connect is far smarter than its predecessor and serves up healthy food fast.