The Tefal Blendeo BL2A3142 is a basic, easy-to-use blender that can successfully create smoothies and soups. While it struggles with ice crushing, it does come with extra blades for grinding and chopping smaller amounts of ingredients. It’s a bit budget in its look, but on a positive note it takes up very little worktop space and is light enough to move around constantly.

The Tefal Blendeo BL2A3142 is a small budget blender that helpfully comes with two additional cups and blades for chopping and grinding ingredients.

While it struggled with crushing ice, it successfully blended fruit and veg into smoothies and soups, as well as pureed onion and processed nuts into butter.

Even though the Blendeo may seem a tad small and plasticky – further emphasised by its shiny white finish – it’s an efficient little blender with a number of things going for it.

The jug here is very light and attached to the not-much-heavier base with an easy but secure twist. Helpfully, the base has two rubber feet as well as two suction pads, meaning it can attach itself to the worktop to avoid sliding around when blending. This blender did get a bit shaky at times, but the suction cups kept it firmly in place.

The lid comes with a transparent measuring cup, with 50ml and 1.5oz measurements. The jug itself goes up to 1250ml in 250ml increments on one side, and to 40oz in 8oz increments on the other. 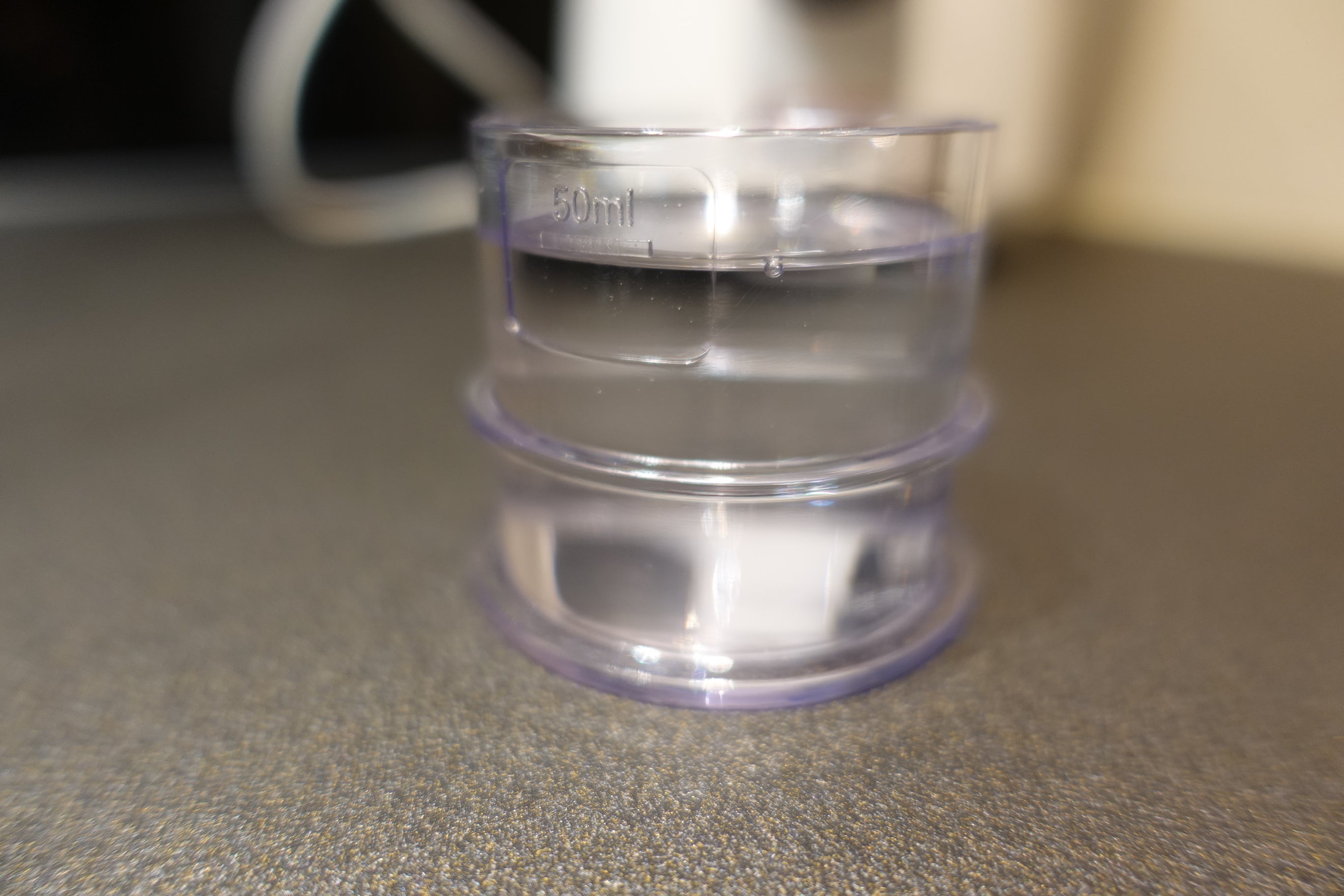 There’s a handy measuring cup in the lid

There are only two speed settings and a pulse function, making this blender very easy to use. For selecting a speed, the knob needs to be twisted to the right; for pulse, twist it to the left. It’s also relatively easy to hold the knob down for pulsing, meaning it doesn’t become too tiring. 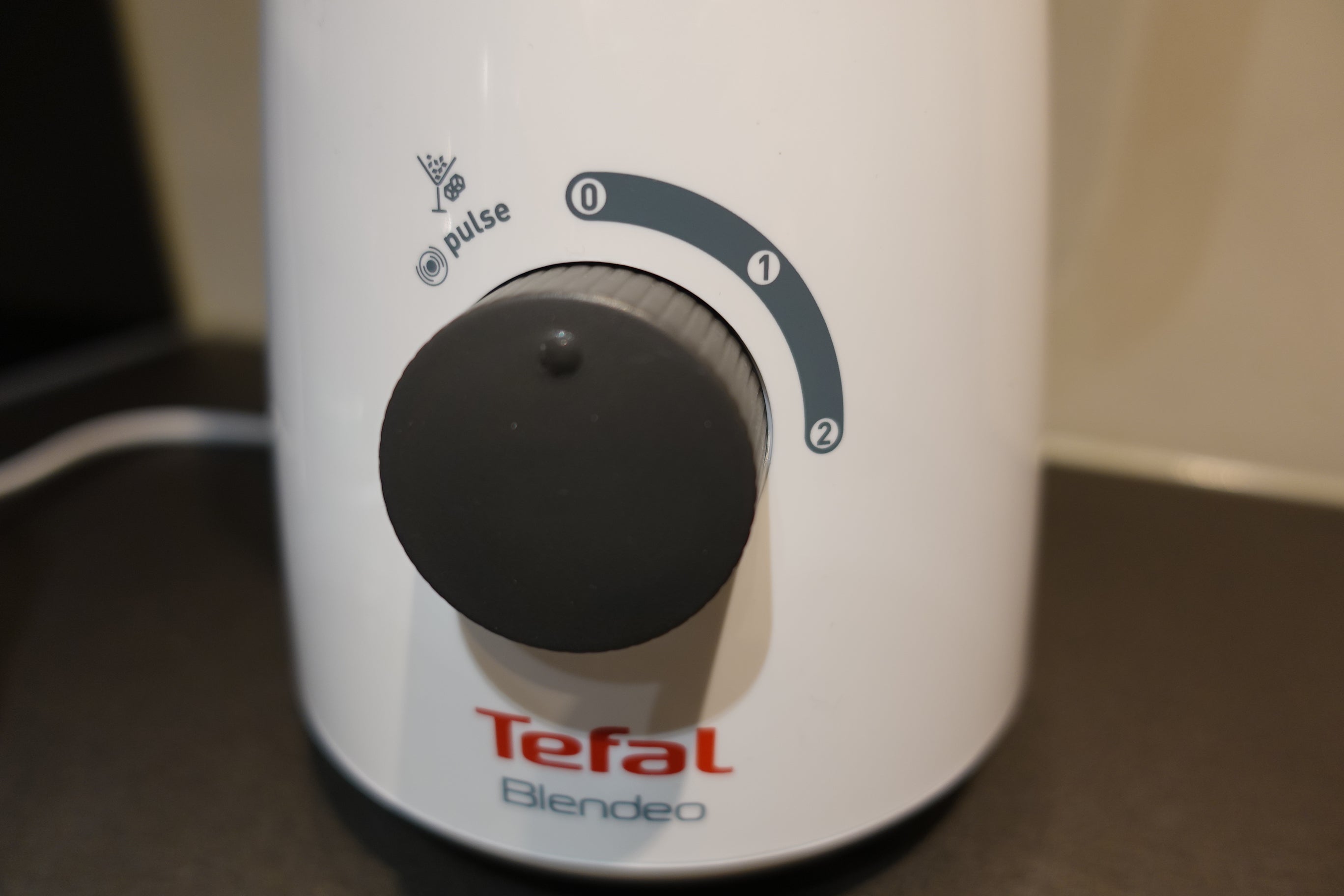 There are two speed settings and a pulse control only

In addition to the main jug unit and its blades, this blender comes with two further sets of blades and two small transparent plastic cups.

The chopping blades are attached to a green base and are suitable for small quantities of herbs, garlic, onion, meat and dried bread. The grinding blades on a red base are suitable for nuts and coffee beans, although for the latter you risk burning the coffee; a proper burr grinder makes more sense.

For using these tools, the picture-focused but easy-to-use manual suggests speeds, times and quantities. But the suggested quantities seem a little low, even considering the small cup sizes. I doubled the amounts on a few occasions with no impact on quality. 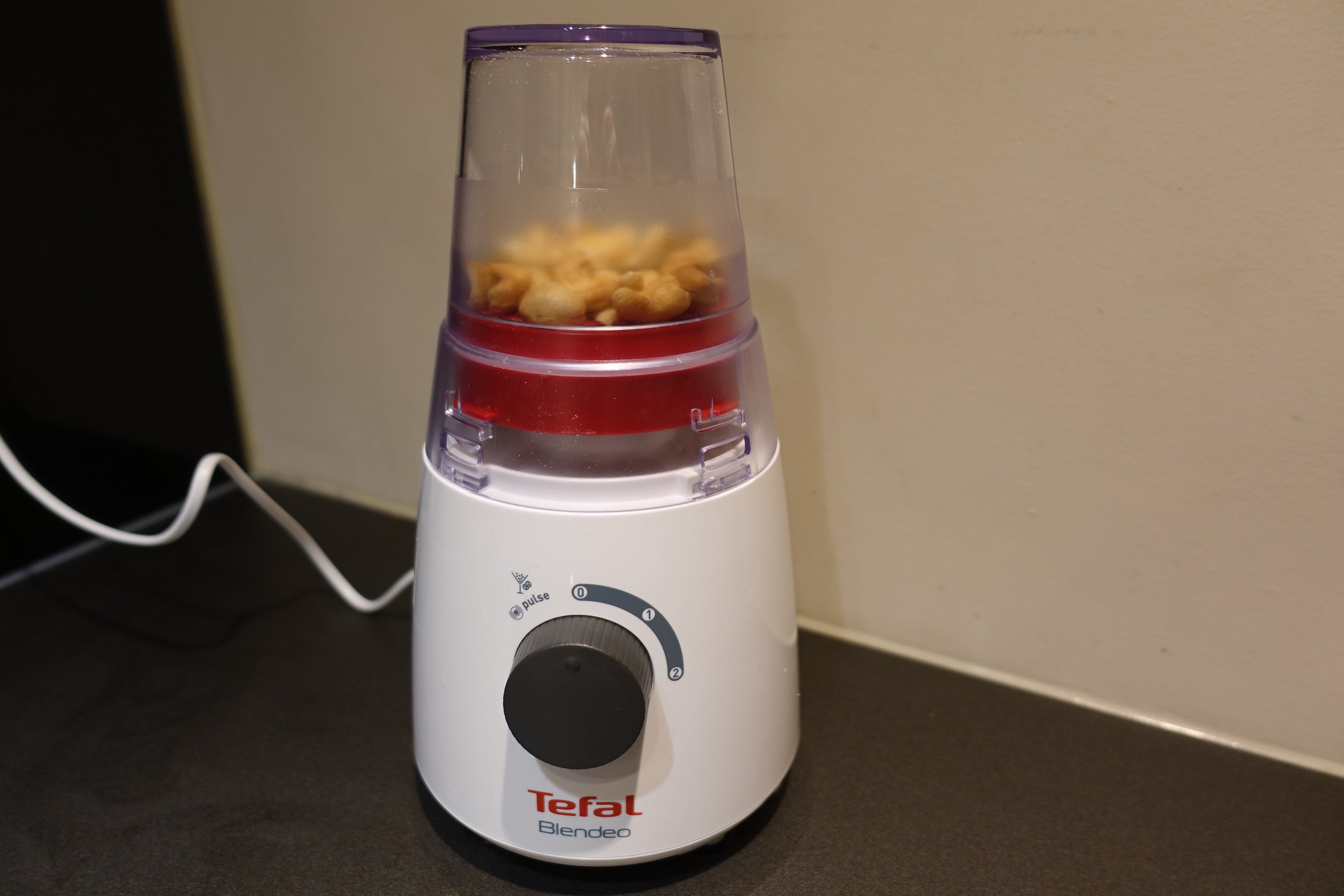 There’s a smaller grinder accessory in the box

Helpfully, the jug, the lid, the measuring cup and the smaller accessory cups are all dishwasher-safe. However, all the blades need to be washed manually. The main jug’s blades can be removed easily, by twisting the bottom. When cleaning, be mindful of the rubber seals provided with each set of blades, since these are crucial to prevent leakage.

I began by blending chopped mango, frozen pineapple cubes, coconut milk and some seeds. It took about 30 seconds for the mixture to mostly come together, but some honey I’d used as a sweetener remained stuck on the sides of the jug, prompting a further 30 seconds of blending. I started with setting 1, moving to setting 2 soon after for the rest of the blending. Ifinished with two pulses.

While the blender became a little shaky during this process, the suction pads kept it firmly in place. The resulting mixture was thick but drinkable, and pleasantly smooth with all the seeds crushed. 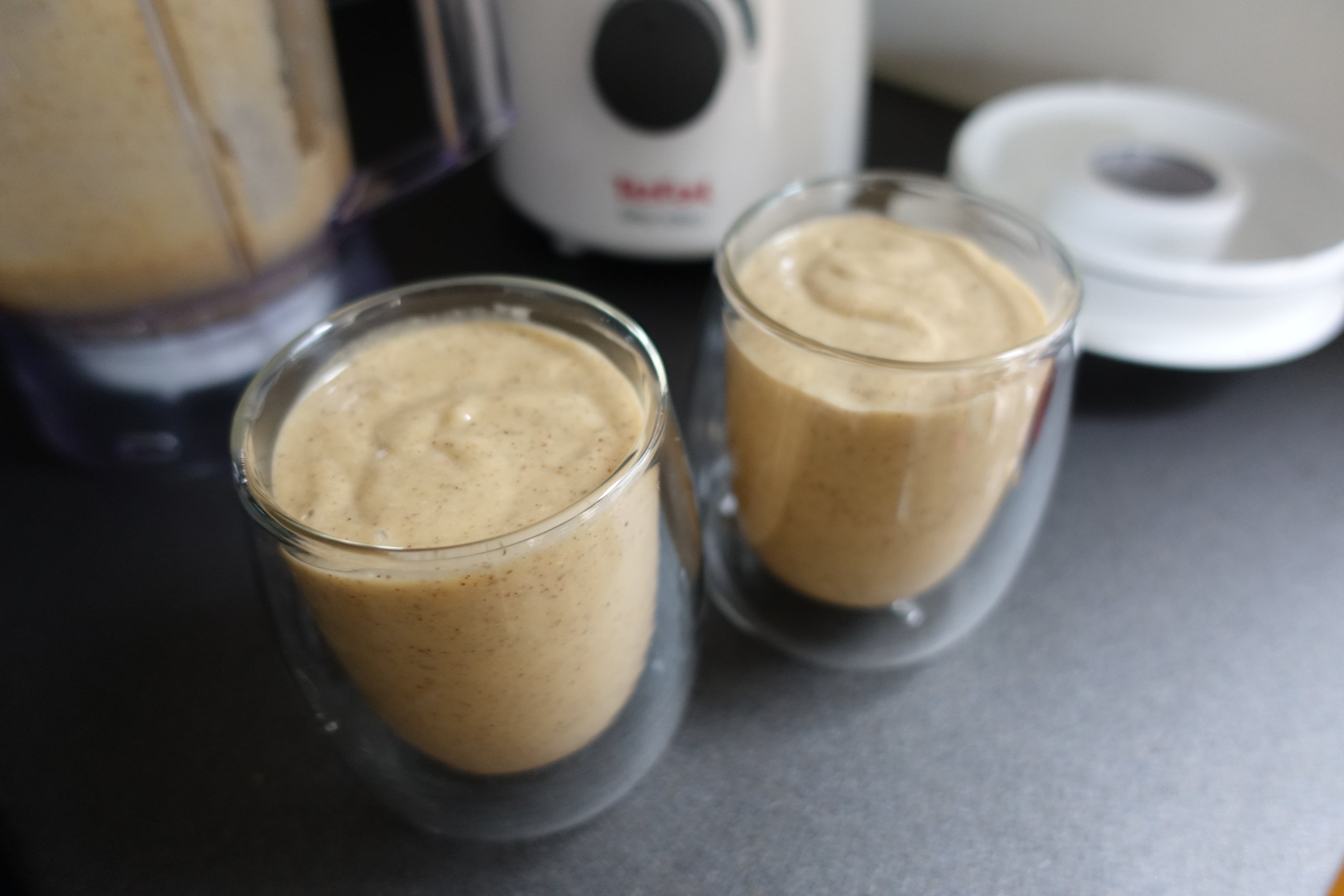 Smoothies came out nicely mixed without any larger chunks remaining

Next, I tried a trickier smoothie with water, frozen strawberries, cacao and protein powders, avocado, banana, cacao nibs and cashews. The blender managed to lose all trace of the cashews and cacao nibs, performing better than the Morphy Richards 403010 Total Control Blender on that front. 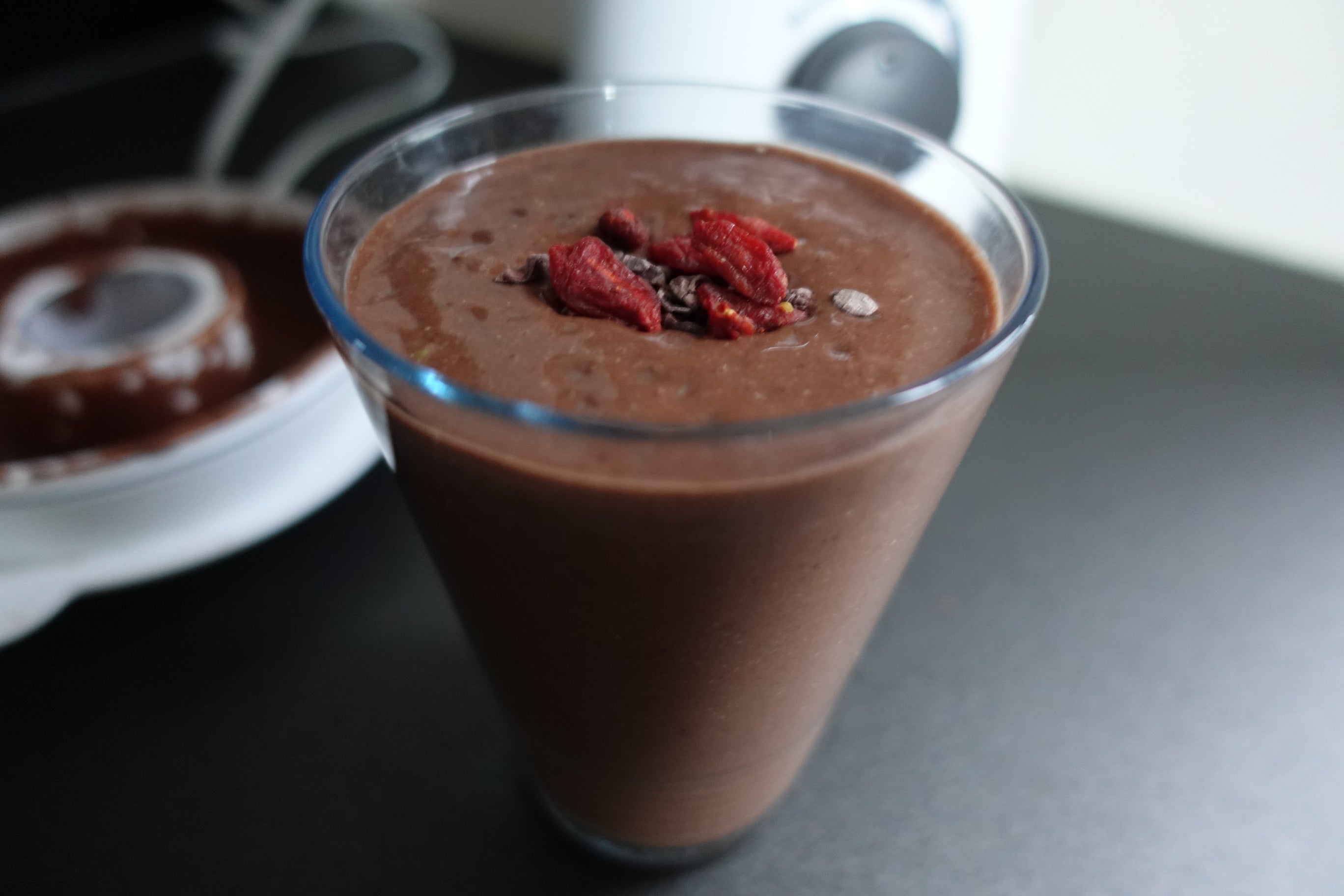 Even trickier smoothies came out well

However, the Blendeo struggled when it came to crushing ice. After 55 seconds of pulsing, the bottom of the jug looked a slushy mess, while larger ice cubes remained on top. By the time I managed to get the larger bits crushed, the smaller ones had turned into water. 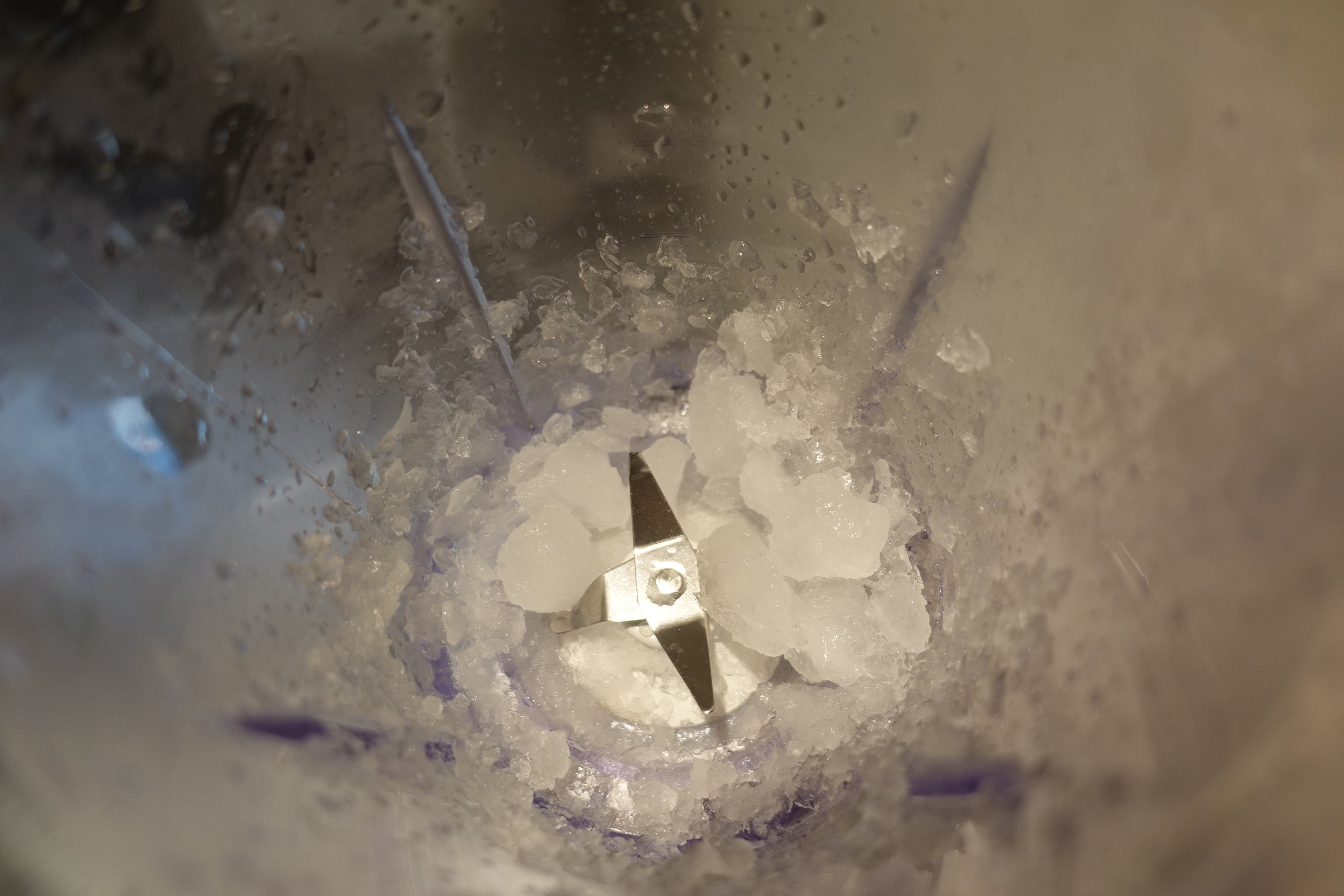 I then set my sights on making a frozen dessert. I pulsed and then blended eight small ice cubes, some syrup and two handfuls of frozen strawberries. Even with a little water and extra pulsing time, I wasn’t able to avoid an uneven texture with occasional chunks of ice. 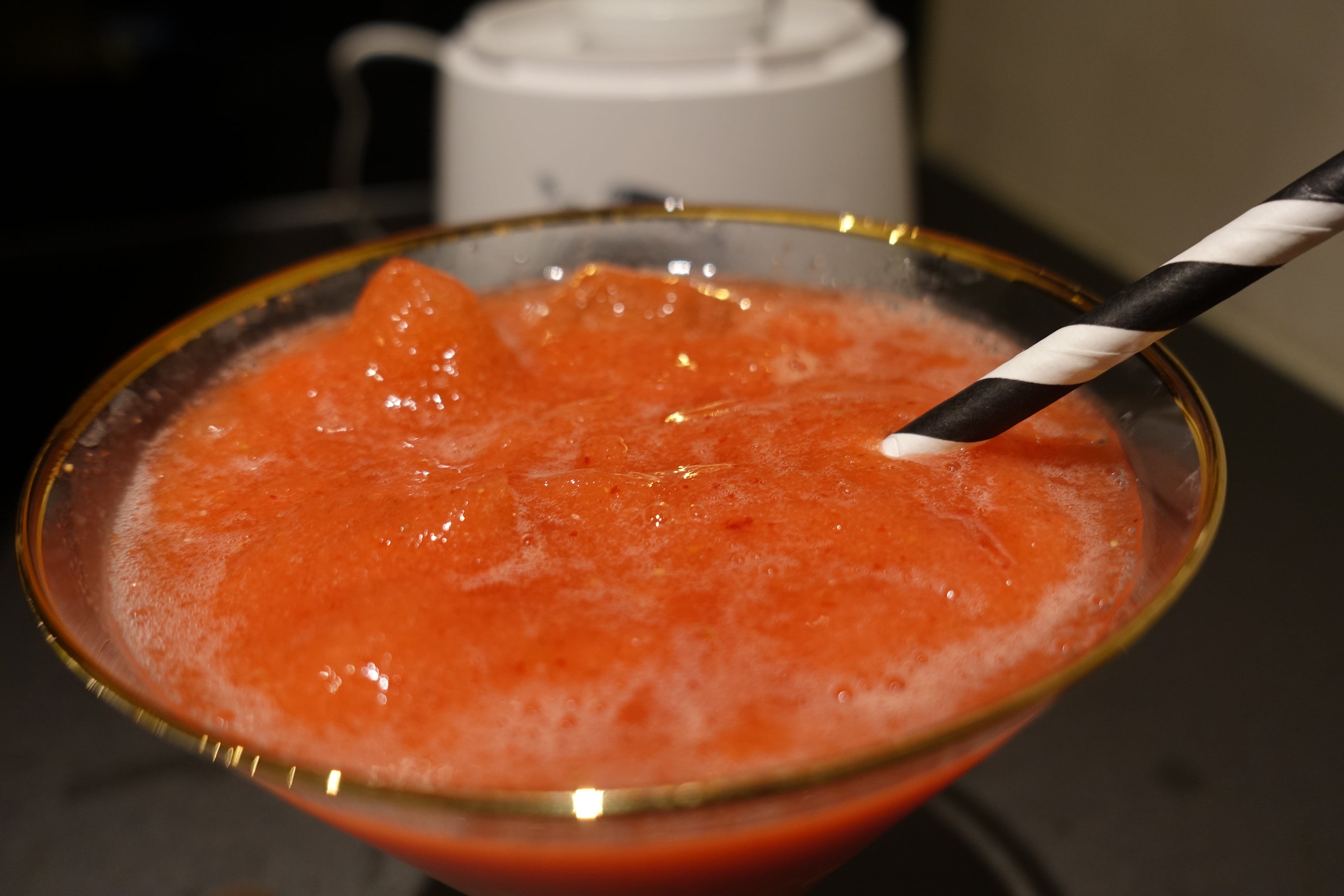 To make soup, I blended briefly boiled cauliflower, leek and soft beans with some stock and milk. As the manual recommends not to blend anything over 80°C, I waited for the mixture to cool to about 70°C. After 45 seconds of blending on speeds 1 and 2, the resulting mixture was smooth and fluffy. 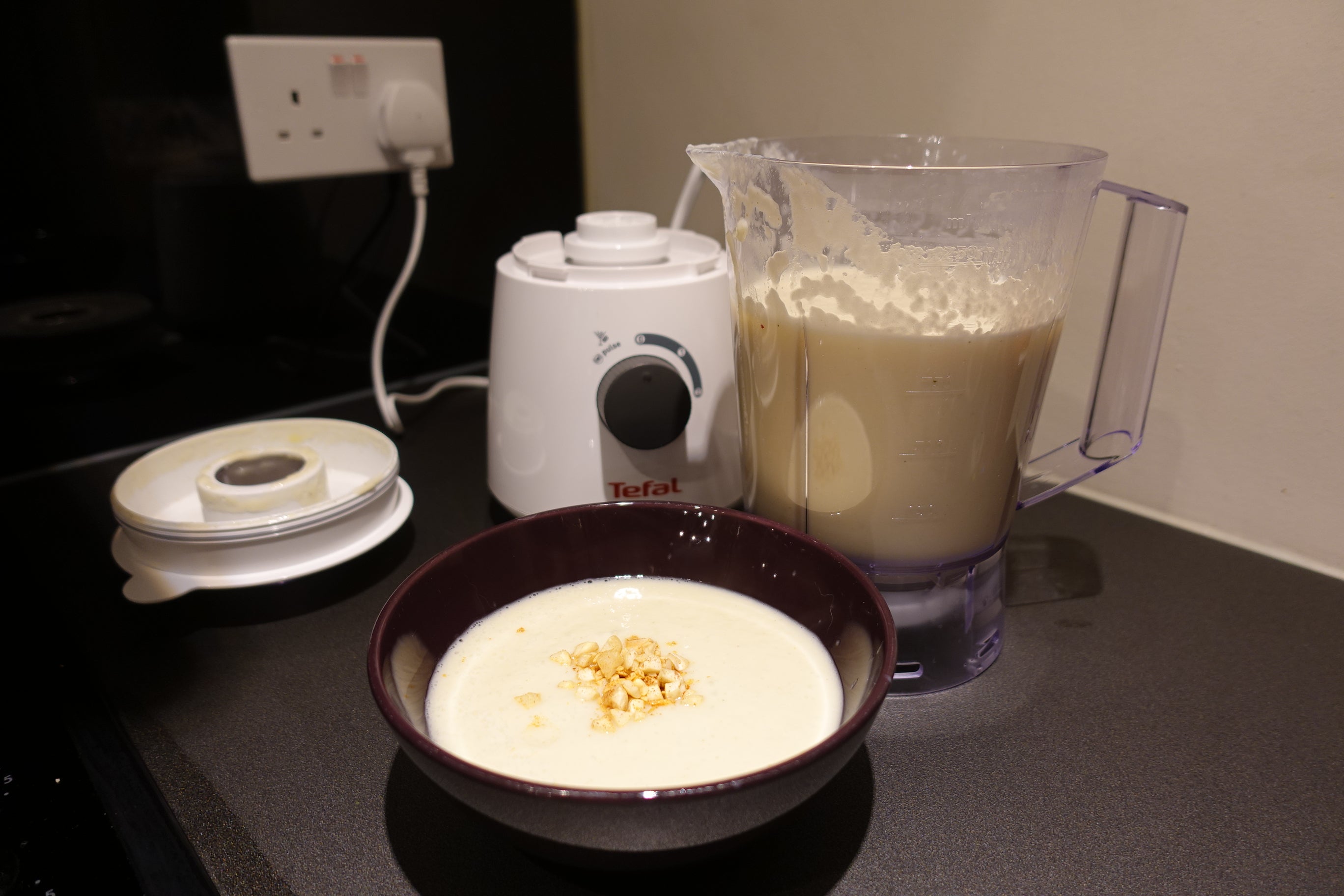 Our soup was smooth and tasty

Next, I used the grinder accessory to make some nut butter. Blending 40g salted roasted cashews for 30 seconds on speed 2 produced some nice, if a little dry, cashew butter. I also tried processing a larger amount – 90g – of crushed roasted nuts and had similar results in the same time frame. 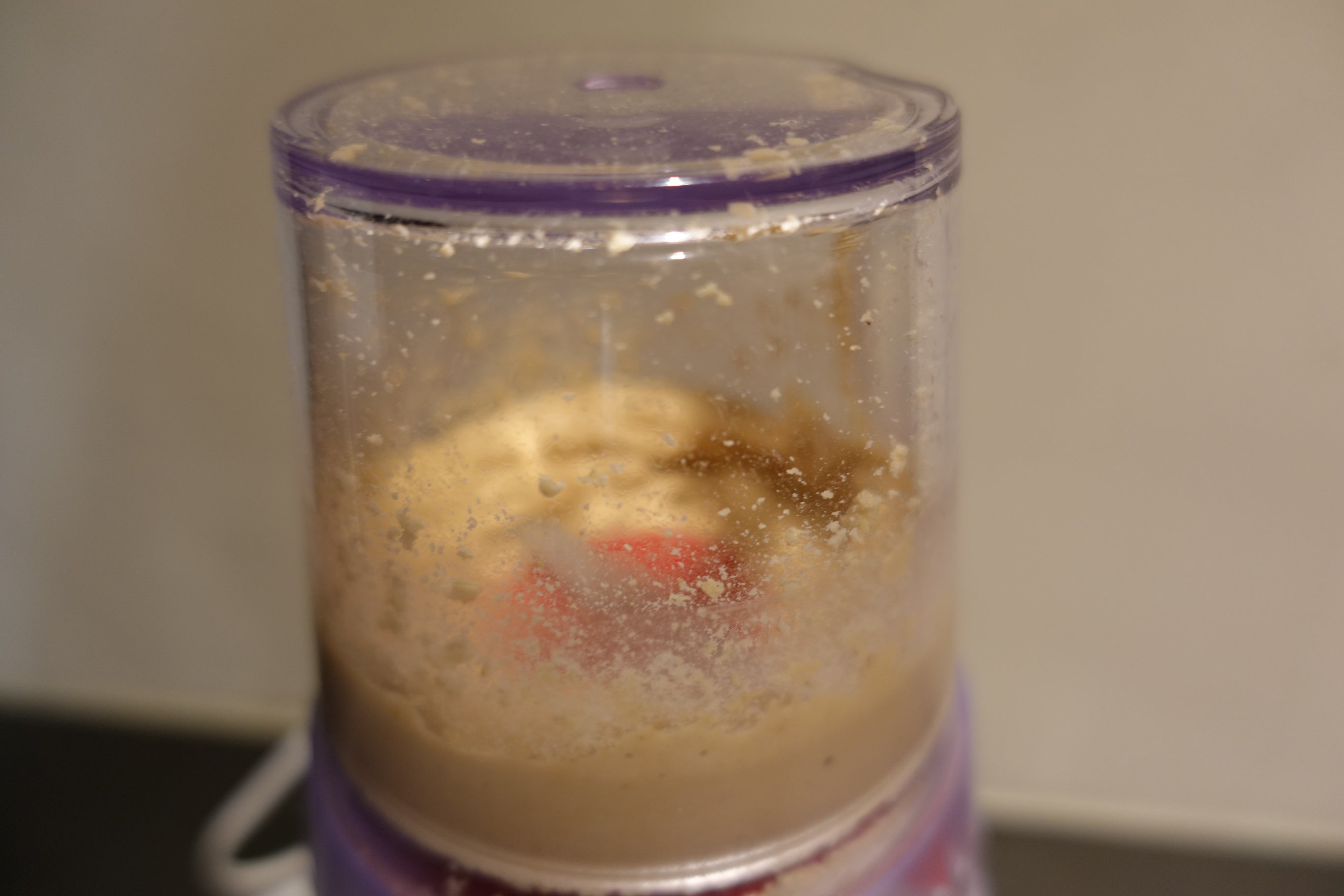 The nut butter was a little on the dry side, but still tasty

Finally, I used the chopper accessory with some onion. Starting with a quarter of an onion – about 30g, as recommended in the manual – I pulsed it 15 times. The result was slightly uneven, with some larger bits and some nearly pureed. I added another quarter of an onion, and pulsed a little longer, finishing with a relatively smooth onion paste. 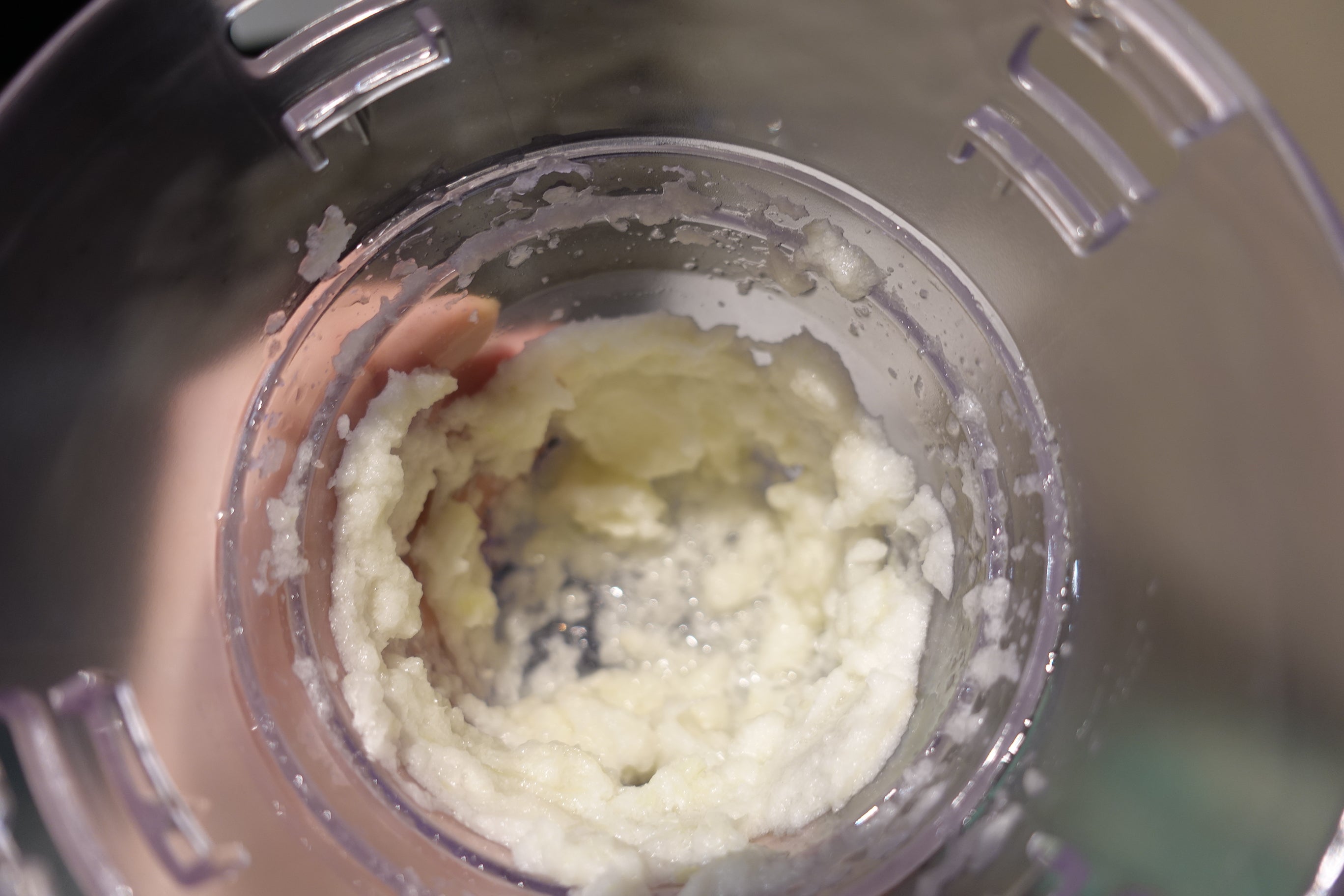 If you’re on a budget and looking for a small multi-functional blender, the Tefal Blendeo can cover blending, chopping and grinding – but the latter two only for smaller quantities.

But if you don’t need the variety then the Morphy Richards 403010 Total Control Blender with its glass jug may prove a sturdier option. Nevertheless, the Morphy Richards blender had issues with ice, too – so if you’re looking to crush ice or make ice-blended drinks regularly, you may be better off with a more powerful machine.