What is the Tefal ActiFry Smart XL?

It’s been a decade since the ActiFry launched, and while the latest version still produces healthy chips with only 20ml of oil, plenty has changed. The ActiFry Smart XL comes with Bluetooth connectivity, allowing you to cook a variety of recipes without touching a single one of its buttons.

Instead, it can be controlled via a dedicated app, so you can cook everything from low-fat fried food and stir-fries to risottos, fish and desserts. Coupled with a pan that can hold up to 1.7kg of food and dishwasher-safe parts, it’s no overstatement to say that this is the ActiFry – but bigger and better than ever.

There’s no getting away from the fact that this machine deserves the XL part of its name. It weighs 6kg and takes up a fair amount of space, plus the lid needs room above to open fully, so there’s no parking it under wall cabinets while cooking.

However, it’s attractive enough to live out on the worktop, pleasingly curvy and finished in glossy black. It features minimum buttons for manual use at the rear: just plus and minus control to toggle time and another to start, pause and stop cooking. 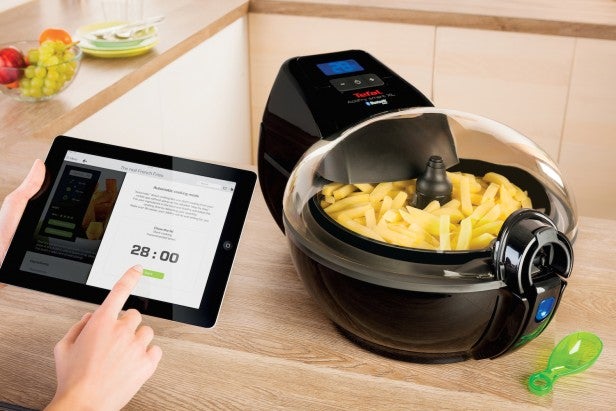 Inside, the setup is also fuss-free, with a removable non-stick pan with a fold-down handle and a rotating paddle that’s secure when the pan’s tipped up but that can be removed. The lid is see-through so you get a view of what’s going on, and can also be detached.

The ActiFry cooks by way of a heat-pulse system, with the Smart XL adjusting the temperature, time and stirring motions depending on your chosen meal. Cook using the app and you can start, stop and pause cooking from another room in the house. However, you’ll need a reasonably up-to-date device that has Bluetooth LE.

Tefal ActiFry Smart XL – What is it like to use?

In general, Bluetooth-connected appliances can be a pain to pair, but the ActiFry Smart XL linked up to the app on an iPad first time. The app includes a wide range of recipes, divided into those that can be cooked with any ActiFry, and those specifically for the ActiFry Smart XL – which cook with a static paddle.

We started by making meatballs. The app divides the prep and cooking process into steps with accompanying photos to guide you, although not all of these have been incorporated yet; stock photography was used in this and other recipes.

Once the meat mixture had been rolled into 16 balls, we placed them at the rear of the pan, so they’d be cooked at the right temperature (the pan having been preheated). Opposite, we poured in canned tomatoes for the sauce. We then closed the lid and chose the start command on the app. This set a cooking time of 22 minutes.

Since the meatballs were soft, the ActiFry’s paddle didn’t begin to turn until they had browned. The result was a well-cooked dish of meatballs that were far easier to cook than conventional frying.

Next, we tried the recipe for Healthy Poutine to test the ActiFry’s staple offering – chips. Disappointingly, the gravy for this dish had to be made separately.

Slicing skin-on potatoes into 1cm strips, rinsing and drying them, we added them to the pan along with an ActiFry spoon full of oil – about 20ml. Closing the lid, we started cooking with the app, with this programme taking 28 minutes. The chips were delicious: evenly fried with a crisp exterior, fluffy interior and no sogginess in sight.

Moving on to a dessert: Cinnamon Apples. We added peeled apples, apricots, sugar and cinnamon to the pan and started the programme from the app. After the cooking time of 15 minutes had elapsed, there was a layer of caramelised sugar that had set on the paddle. This required scrubbing with a non-scratch sponge. The apples and apricots were soft and moist, though.

We finished by trying the Roast Chicken, substituting thighs for drumsticks coated in a marinade. The paddle slowly turned, frying the chicken for 20 minutes. The drumsticks were evenly cooked, although the skin had been pulled off in places, with some smaller bits becoming detached.

Some chunks of the marinade were slightly singed, too, but cooking chicken this way is healthier than deep-fat frying plus the results were more consistent. All the parts could be removed for cleaning in the dishwasher, and while this was easy, cleaning the paddle by hand in between recipes was laborious. 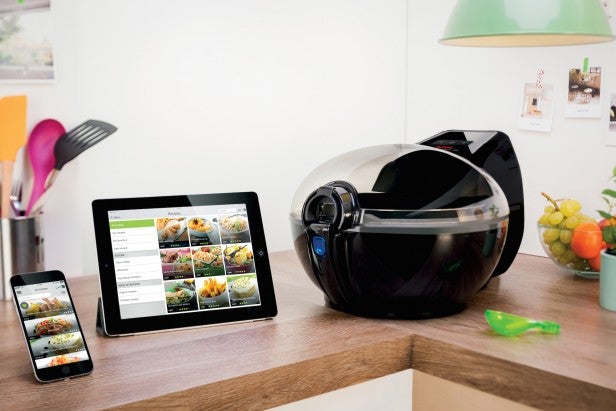 Should I buy the Tefal ActiFry Smart XL?

The Tefal ActiFry Smart XL does plenty of things well: the app is easy to use, its chips are faultless, the cooking is even, and it’s more versatile than a standard ActiFry – making it great for families. However, even though its parts can be removed for dishwashing, cleaning the paddle by hand feels like a chore, as food sticks to it and is difficult to remove.

In addition, only one ActiFry spoon is included, despite it being used in almost every recipe for oil, liquids and spices – and often more than once. It would be good to see the recipes with equivalent metric measurements, rather than relying so heavily on the utensil.

This fab fryer and its ambitious app are worth welcoming into your kitchen.