Tefal’s ActiFry Genius XL 2in1 costs about £30 more than the previous model – but it’s a price bump that brings real value. This model comes equipped with everything you need for a whole meal – a pan big enough for 1.5g of chips while you grill steak on the bottom, or even a full English breakfast. If you can make enough space for it, it has the potential to deliver tasty, easy dinners on a daily basis. If that isn’t worth paying a little extra for, then what is?

What is the Tefal ActiFry Genius XL 2in1?

If you’ve ever used an ActiFry, then you’ll be familiar with its “one spoon of oil” or fat-free hot-air cooking that makes everything from low-fat chips to whole meals with just a stirring paddle and a pan. However, this latest incarnation, the Tefal ActiFry Genius XL 2in1, takes the concept further by allowing you to cook two things in it at the same time.

The addition of a tray on top of the pan means you can grill burgers while cooking a side dish below, meaning there’s no waiting around for different parts of dinner to be ready. As the next step on from the ActiFry Genius XL, it’s essentially even more genius for healthy meals for the whole family.

Tefal ActiFry Genius XL 2in1 – What you need to know

Tefal ActiFry Genius XL 2in1 design – Big and bulky, but two cooking zones go some way towards offsetting its size

It’s rare to find a kitchen with acres of free worktop space, especially in family homes where any spare inch becomes a magnet for clutter. Which is why the more an appliance can do, the greater an asset it becomes.

The Tefal ActiFry Genius XL 2in1 is one such double-duty model. Until this point, ActiFry models have tended towards being pretty cumbersome, with space required above for the lid to open. While that’s still true here, the fact that you can cook two things at once makes the space requirement far more forgivable. Thanks to the upper tray, you can cook two things at the same time

During testing, I was able to whip up mini-pizza breads while sautéing mushrooms, and roast chicken at the same time as chips – without watching the clock or standing over a pan. This may not sound like a revelation, but if you regularly coordinate a family dinner while supervising homework, it could be a game-changer.

Inside, it resembles the Genius XL – there’s a large pan with a handle that folds in while cooking, and back out again so the pan can be lifted out for serving. There’s a clip-on turn-over ring, good visibility through the lid, and a stirring paddle to keep food moving for even cooking.

What’s different is that the stirring paddle now fits the tray on top of it, rotating it at the same time. Ridges on the base of the tray act much like a grill, allowing fat and juices to drain away as food cooks, and there’s a special handle that latches onto the centre so it can be lifted off easily.

The Tefal ActiFry Genius XL 2in1’s features are similar and just as versatile those on the Genius XL. There remain nine automatic programmes plus manual cooking (although I found that adjusting programmes was easier than programming a manual cook setting), a 60-minute timer, and a temperature range of 70-220ºC. Like the Genius XL, there’s a nine-hour delay start and automatic keep warm that help it to fit around a busy day. 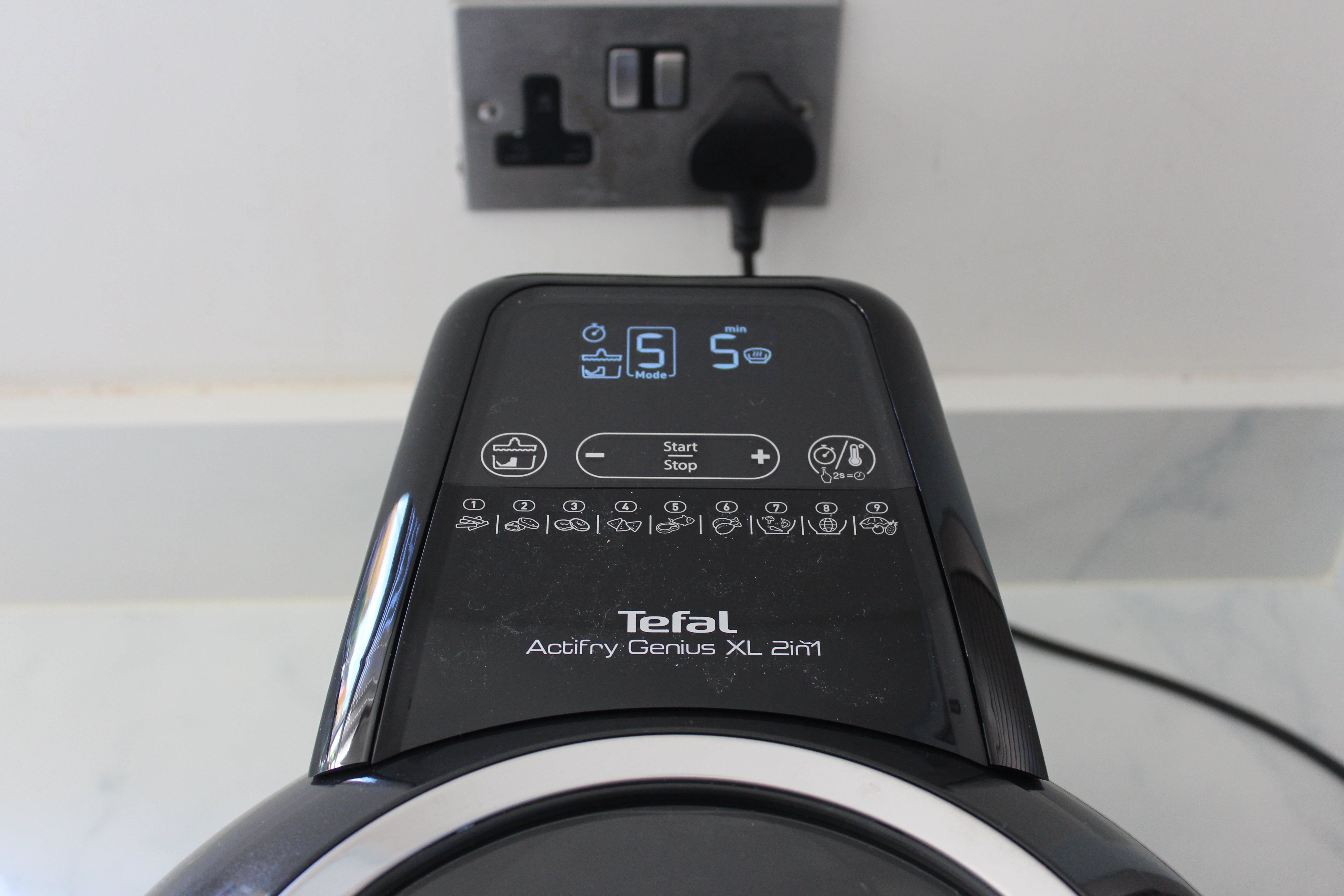 There are separate controls for the two parts of the fryer, which makes this machine a little complicated to use

Programming the Genius XL 2in1 is more complex, since time and temperature can be adjusted for both the pan and tray. The main problem I had when setting it was accidentally selecting the pan and tray option and then not being able to revert to just cooking with the pan. Without the instructions at hand, I would have been at a loss – it isn’t the most intuitive to set.

On the plus side, the recipes provided (including the 300 or so on the MyActiFry app, which carries veggie and vegan options, too) are a perfect way to get used to its functions.

Tefal ActiFry Genius XL 2in1 performance – A wider variety of cooking options than its predecessor, plus easy cleaning

ActiFrys might have forged a reputation for low-fat fries, but the twin cooking surfaces of the Genius XL 2in1 mean it can cook almost any foods quickly and easily.

For example, I sautéed mushrooms in 10 minutes and cooked chicken drumsticks through to the bone in 15. The only area where it didn’t work as well was when toasting bread for the pizza, as some of the residual flour on it blew around the cavity, ending up in the removable filter and around the rim. 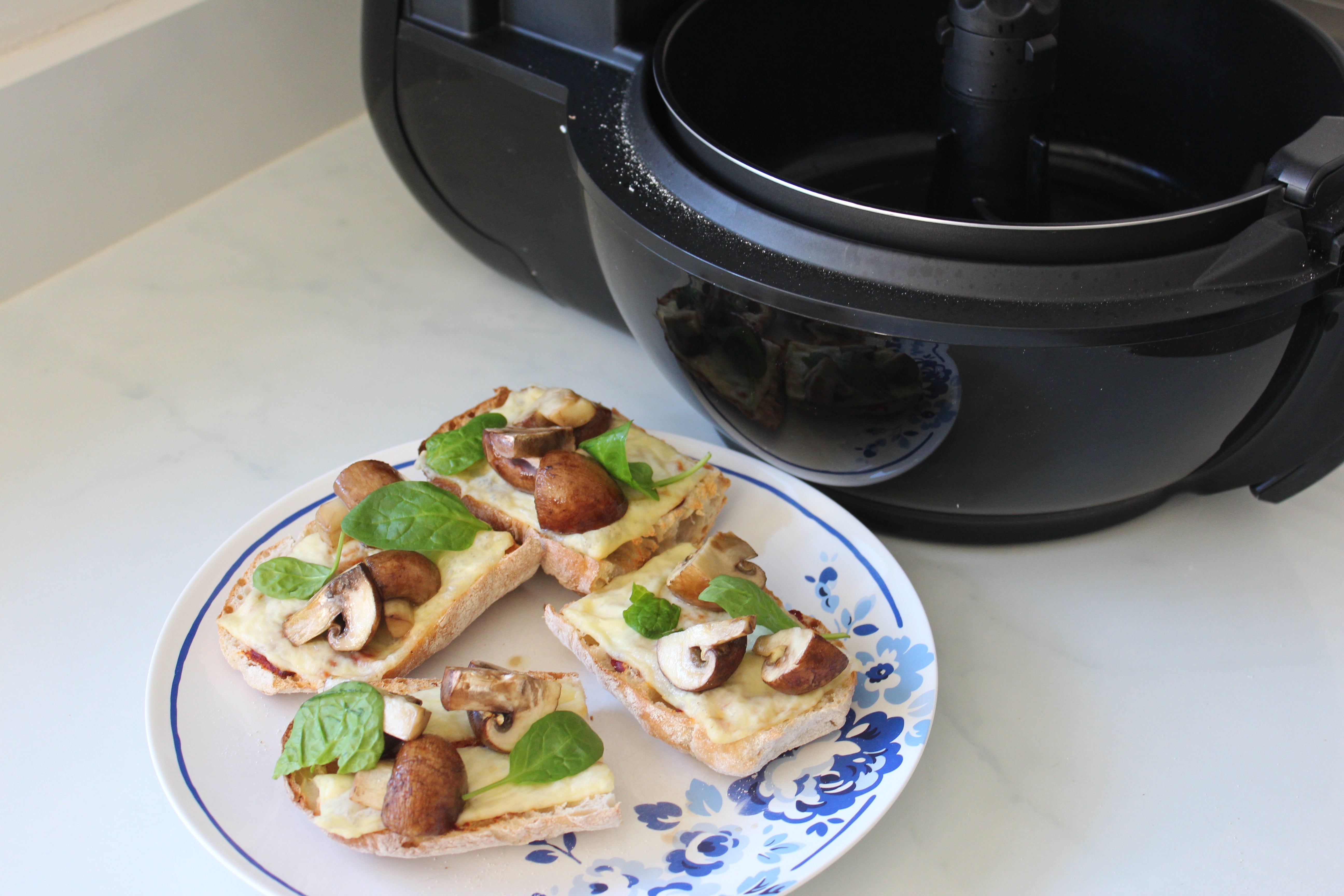 The only other issue it has is that cooking is just as noisy as the Genius XL – it’s tricky to have a conversation over its whooshing. This makes it less suitable for an open-plan kitchen, especially if it’s cooking one of the longer programmes.

Where it does excel is clean-up afterwards. All the parts are dishwasher-safe, even the removable lid, plus there are no awkward areas for food debris to gather, meaning washing up is almost as effortless.

Should you buy Tefal ActiFry Genius XL 2in1?

While there’s no getting away from the issue that the ActiFry Genius XL 2in1 is a pricey, quite sizeable, appliance, its capacity and versatility makes it ideal for families, batch-cooking, and even keen entertainers who’d rather be socialising with their guests than slaving over a hot stove.

The ease of cleaning, variety of programmes and delay start makes it ideal for regular use and busy lives. If you’re short on worktop space or only plan to use an air fryer occasionally, give it a miss – but for those who love to come home to good food fast, the Tefal ActiFry Genius XL 2in1 is sure to become a permanent fixture.