Don’t you just hate those people who reckon there’s no point having hundreds of TV channels when they’re all ‘filled with nothing but rubbish’? Anyone who’s actually spent quality time with hundreds of TV channels knows the real point is that even though 95 per cent of the channels might be showing rubbish at any particular time, there will always be something on somewhere you’ll be interested in. In other words, having hundreds of channels puts your viewing schedule in your hands, rather than at the (often bizarre) whim of a handful of broadcasters.


Our clearly strong feelings on this subject (!) inevitably predispose us to feel very favourable towards TechniSat’s HD-Vision 32. For this rather remarkable 32in LCD TV, hailing from Germany, offers you the opportunity to watch potentially hundreds of TV channels without any need for even a single external receiver box. How? By building in tuners for analogue terrestrial and satellite broadcasts, digital terrestrial and satellite broadcasts, and even analogue and digital cable broadcasts. 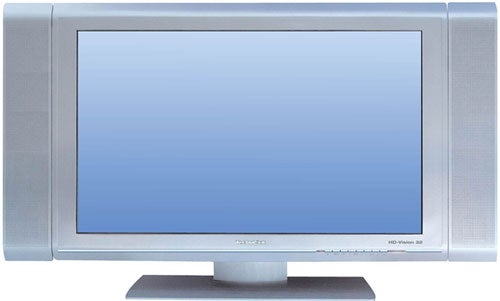 On paper this sounds like a dream come true for people who want channel choice without the clutter and complication of extra boxes and remote controls. But does the reality live up to the hype?


First impressions bode ill. The HD-Vision 32 just isn’t a particularly attractive TV, thanks to its rather chunky demeanour, plain lines and flimsy build quality. It can at least be bought in a series of different finishes: high gloss black, high gloss white, standard black, platinum and silver. Plus you can choose whether you have speakers that run down each side of the TV or speakers that run under the screen. But the fact is that none of these design selections exactly set our pulses racing.


At least things look up with the TV’s connectivity. Twin HDMIs show an appreciation of HD fare, and these are inevitably backed up by component jacks for analogue HD sources like the Xbox 360. Other sockets include two Scarts, a USB port for attaching USB storage devices, a D-Sub PC input, a subwoofer line out, and a digital audio output for delivering any Dolby Digital 5.1 audio broadcasts one of your countless channels might deliver to a suitable AV receiver.

Not surprisingly for such a ‘catch all’ TV, the HD-Vision 32 also carries two CI slots where you can add subscription cards for some of the satellite or cable channels you might want to receive. Critically, though, these CI slots won’t work with Sky cards, due to Sky’s insistence of marrying its cards to specific Sky boxes. Boo.


With that bombshell, other limitations of the HD-Vision 32 suddenly start to appear. For starters, with no Sky available, the amount of English-language programmes you can pick up plummets. What’s more, you’re really going to have to know your satellites to know where best to point your satellite dish in order to get the best digital and analogue channel choice. 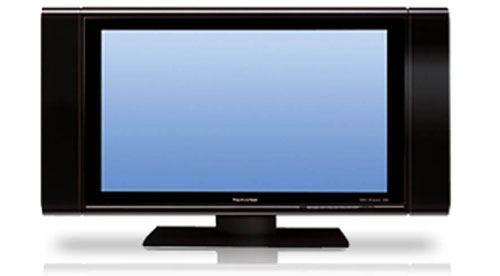 In other words, not only are you going to have to fork out for a satellite dish, but you’re going to have acquire quite a bit of ‘Euro TV’ knowledge to go with it. The HD-Vision 32’s not looking like quite such a convenient, easy way into hundreds of channels now, is it?


These feelings only escalate as you try and use the TV on a day to day basis. The main problem is that the TV’s channel listings system is immensely tedious to navigate due to the sheer number of channels you can end up with. A few aids are offered for organising channels, but you’ll have to put in a fair amount of time to make this work truly effectively – and even then, it’s certainly no match for Sky’s Electronic Programme Guide (EPG).


The set is at least compatible with Freeview’s 7-day EPG, though. And it can download via satellite regularly updated listings from a programme guide compiled by TechniSat itself. But really this all only helps a little with the general sense of befuddlement that we felt throughout our time with the HD-Vision 32.

Still, we guess there could still be a niche market of free TV/satellite devotees out there willing to live with the HD-Vision 32’s difficulties – provided it at least has the performance to match its unique flexibility. Sadly, it doesn’t. A number of flaws in the set’s pictures become immediately apparent.


The single worst offender is the amount of blurring over fast-moving objects. Watching a Premiership footie match, for instance, it’s hard to make out players’ features or even their shirt numbers at times. And after watching for a full 90 minutes we actually found ourselves feeling slightly nauseous. Yikes!


The HD-Vision 32’s colours leave much to be desired, as well. They’re just about OK during bright scenes, but during ‘normal’ or especially dark scenes they become muted and really quite unnatural in tone. 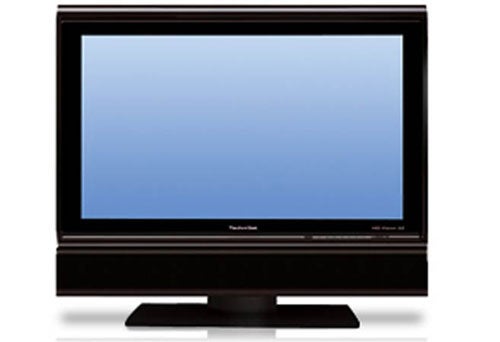 The HD-Vision 32 sadly makes a clean sweep of falling prey to classic LCD weaknesses by suffering some pretty unimpressive black levels. Dark parts of a picture are hidden behind the tell-tale grey mist that always gives away TVs with contrast problems, with the result that dark scenes lack scale and look low on detail, and dark games like Gears of War become really quite difficult to play.


We should say in the interests of fairness that there are times when the HD-Vision 32’s pictures look quite good. And those times basically involve vibrantly colourful, high-quality HD sources, with which you’re suddenly free to appreciate the set’s innate sharpness and brightness. But of course, these sorts of scenes crop up during only a small portion of a typical viewing day.


Sonically the HD-Vision 32 is more successful. Bass lines can sound a little hollow, but aside from that the clarity, volume and soundstage presence the speakers deliver is admirable.


On paper, its ability to deliver hundreds of channels to your home without any need for a Sky subscription or external set-top box sounds tantalising. But in practice the hassles of actually getting these channels, the demands of handling so many channels, and most upsettingly of all, the picture quality with which the channels are presented makes the HD-Vision 32 a product that only the most die-hard satellite surfers should even think about forking out £1300 for.