What is the Technics Ottava f SC-C70 sound system?

When space is tight, an all-in-one music system is a great solution. By combining CD playback with DAB radio, high-res audio support and Bluetooth streaming, you can scratch all your audio itches at once.

New-age music centres are big business. Ruark Audio and Naim (to name but two) have found an enthusiastic audience prepared to pay a premium for an all-in-one universal sound system. It’s an area Technics also covets.

The SC-C70, aka the Ottava f(orte), is a 2.1-channel, five speaker all-in-one, offering a wide range of media support. It plays CDs, has a DAB/FM radio, pairs with Bluetooth devices and is DLNA and AirPlay compliant.

The Ottava f ships with full-size IR remote control, but you can also drive the system using the Technics Music app, which grants even more functionality. 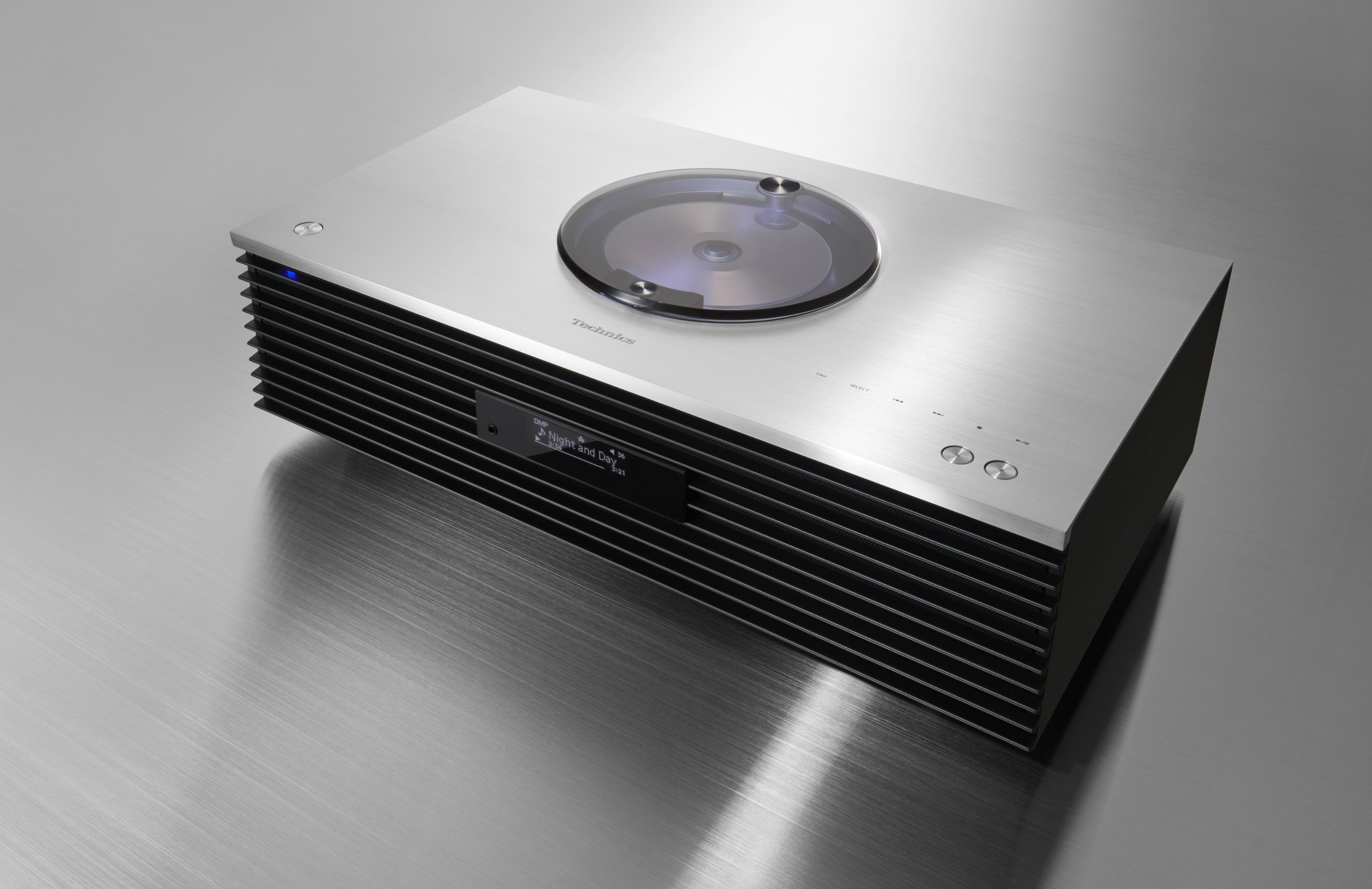 Technics has adopted a utilitarian, modernistic look with this Ottava model, distinguished by a grille protected by louvred plastic slats. Hiding behind are two 2cm silk dome tweeters and a pair of 8cm mid-range woofers.

The tweeters are fronted by an acoustic ‘lens’, which aims to widen the soundstage, and a 12cm subwoofer on the underside routes to dual-bass reflex ports on the rear.

Attention to detail is high. The aluminium top plate boasts a premium hairline finish, with touch-sensitive transport keys and Power/Volume buttons. The top-loading CD player has a cool rotating cover, the disc illuminated with a subtle light when it spins. The drive itself is isolated with vibration absorbing material.

And this music system isn’t only lush on the outside. The mid-range and tweeter speaker units are enclosed in separate chambers, while the cabinet is reinforced for extra rigidity.

The Technics engineering stamp is evident in the use of a trio of JENO (Jitter Elimination and Noise-shaping Optimisation) audio-processing engines. These are used for subwoofer, mid-range and tweeter channel management, and time alignment. This system is clever, and then some. 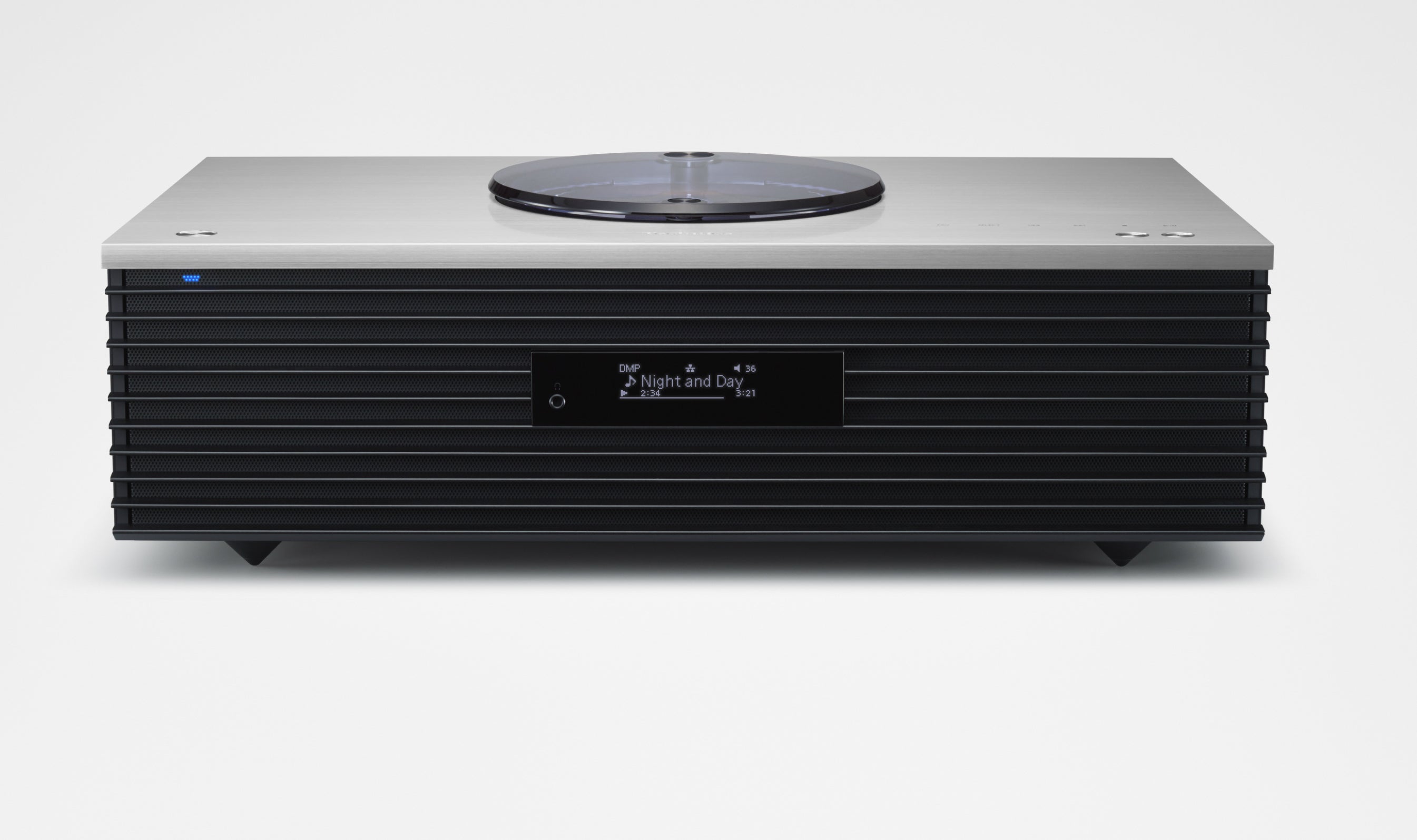 While the majority of system functionality is self-evident, more is revealed when you download the Technics Music app. Here you’ll find Spotify, Tidal and internet radio services. A ‘Favourite’ function provides quick access to your top five radio stations and Spotify playlists. There’s also some basic system management, such as Sound Settings and Tone Control, if you want to twiddle bass, mid and treble.

There’s also Space Tune. No, not a sequel to Space Jam, but a preset EQ setting to optimise performance based on the position of the unit in your room. To be honest, it’s pretty ineffectual. Users of the iOS Technics app can calibrate the system a little further using the microphone in their iOS device. For this audition, only the basic EQ preset available to all, was used. 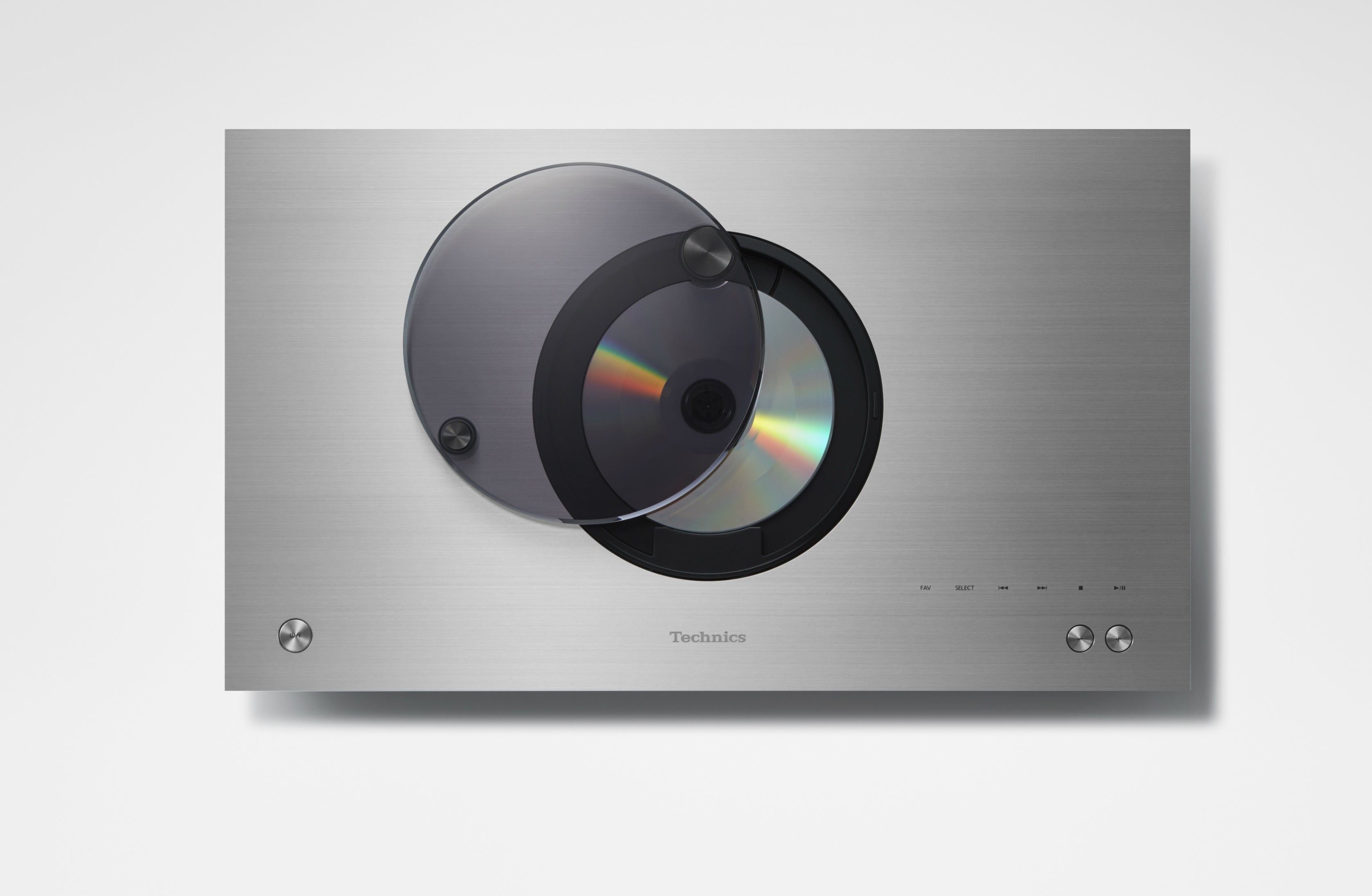 It may be compact, but the Ottava f is notable for its wide soundstage. This open, spacious presentation presumably owes much to that acoustic lens, which uses angled five-degree horizontal fins to stretch stereo width.

It also plays loud, certainly enough to fill the average-sized living room. Digital amplification is quoted at 2 x 40w for the woofers, with 2 x 10w for the tweeters.

Although compatible with mostly any source, the Ottava f is very much a high-res audio player at heart. Even CD is given a lift, courtesy of a CD high-res re-mastering algorithm that expands the frequency band by oversampling and adds a bandwidth extension.

As a consequence, disc playback is exceptionally precise. A spin through Blondie’s ‘Parallel Lines’ recreates a live edge that accurately reflects the band’s punky roots. ‘Venus in Furs’ by The Velvet Underground and Nico is similarly sharp and jangly. Some may find the tone a bit acidic, but I rather like it.

The system applies a comparable upscaling technique to Bluetooth, ostensibly to give it the equivalent range of CD (although there’s no provision for aptX).

The Ottava f even makes a good fist of Rimsky-Korsakov’s ‘Dance of the Tumblers’. Played as a 24-bit/96kHz WAV, the SC-C70 combines spatial depth with lightness of detail. Ravel’s ‘Introduction and Allegro for Harp, Flute, Clarinet and String Quartet’ (24bit/192kHz FLAC) is similarly refined. The perfect soundtrack to a Sunday morning fry-up? I reckon so. This is a lifestyle sound system, not an audiophile hi-fi.

If the Ottava f does have an Achilles’ heel, it’s bass response. Not only is it limited, but there’s a DSP artificiality to the low end that doesn’t entirely convince. At 50Hz, those bass ports honk like fog-bound cruise ships.

‘Nemesis’ by Benjamin Clementine, 24-bit/44.1kHz, takes the SC-C70 about as low as it will comfortably go, with its cheeky vocal harrumphs. Stream some Lee Perry and that subwoofer quickly reaches the limit of its excursion. 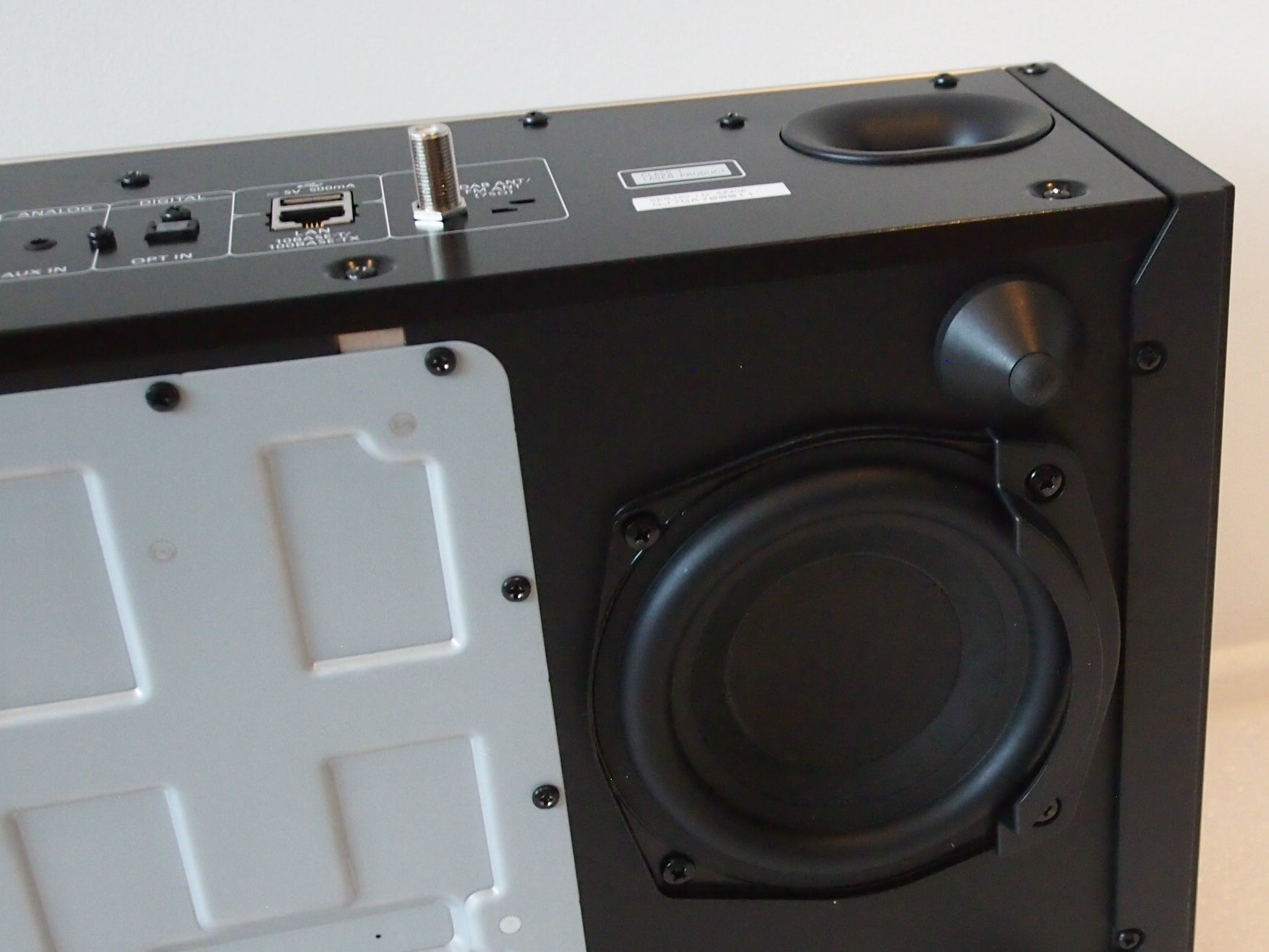 If you’re shortlisting lifestyle all-in-one systems, then this jack of all trades certainly merits serious consideration. The contemporary design is a bit Marmite – it’s kind of space age, which work for us – but system functionality is peerless.

Key reasons to audition are a soundstage that plays wider than its compact form factor might suggest, plus well-rounded, meticulous handling of high-res audio files. It’s predisposition to upscale CD isn’t to be sniffed at either. 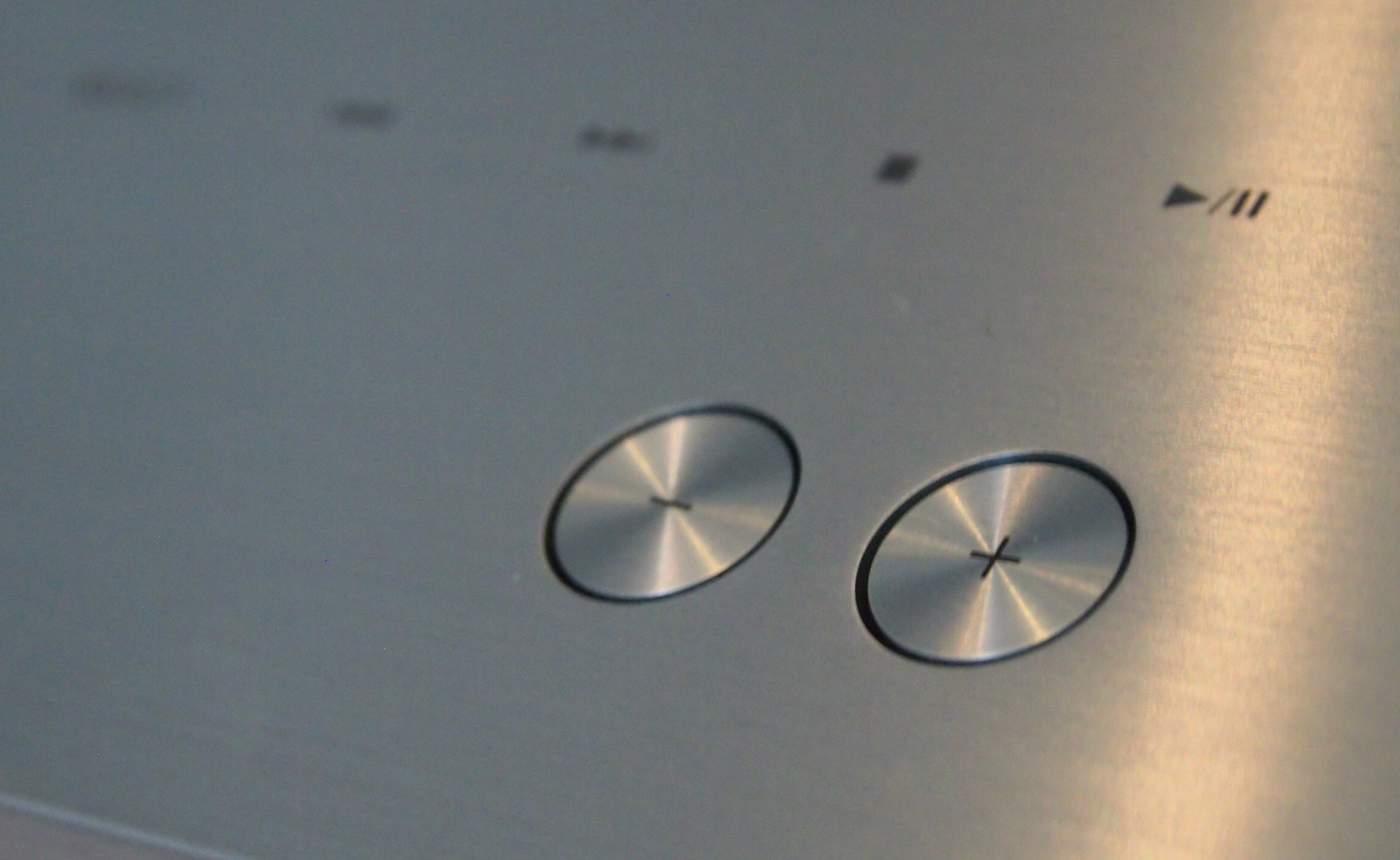 This technically advanced all-in-one music system impresses with its stereophonic width and detail. Stick to high-res audio sources and it won’t disappoint.