Technics' second-generation Ottava f all-in-one music system offers a significant step up in performance over its predecessor thanks to a refreshed driver array, and adds Google Assistant and Chromecast streaming to its CD, DAB and Hi-Res playback.

The arrival of the latter adds a welcome contemporary flourish to the multi-format playback mix, and driver upgrade makes things even more intriguing.

There are no changes to design, however. Technics continues to tread a somewhat eclectic path for its lifestyle products, eschewing the Euro-Scandi retro chic of its rivals in favour of a more divisive techie dress code. It’s available in dark silver or all-black finishes.

So is this your next music centre?

Indicative of its premium status, the Technics Ottava f SC-C70MK2 sports a nice brushed finish to the aluminium top plate, plus touch-sensitive transport keys that beep when stroked. The distinctive louvred slats part only to reveal an understated text display. A 3.5mm headphone jack is on offer, too. All things considered, it’s a very handsome unit.

Deeper bass is handled by the 12cm woofer on the undercarriage, with dual bass reflex ports exiting to the rear. 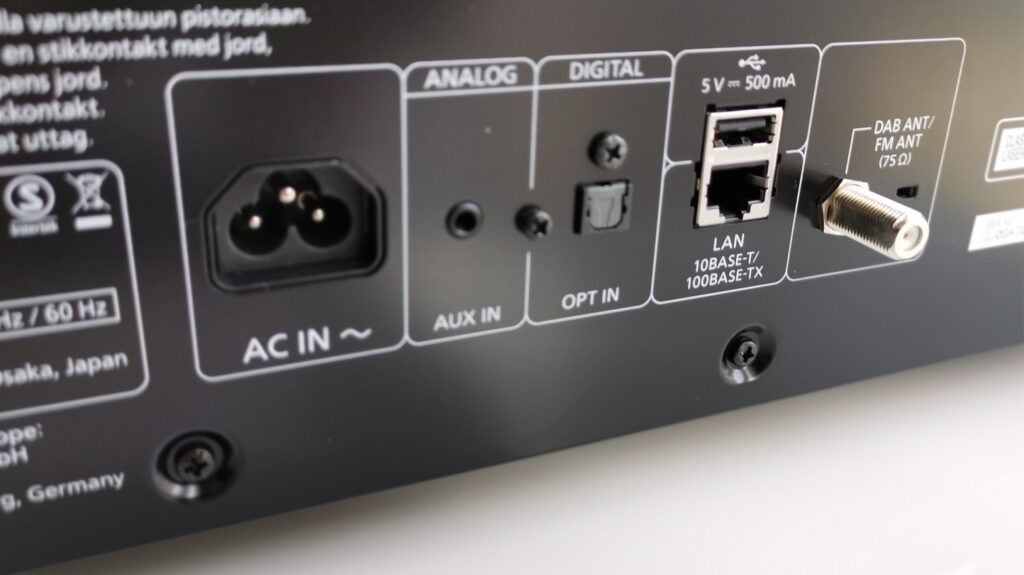 Build quality is meticulous. The 8cm and 2cm dome tweeter speaker units sit within their own separate chambers, while the CD drive is isolated on a bed of absorbing material.

The SC-C70MK2 ships with a largish IR remote control; there are dedicated CD, Radio and BT buttons, plus the usual transport and navigation keys.

Technics Ottava f SC-C70MK2 features – Comprehensive playback options, but not as intuitive as you might hope

There’s no doubt that the SC-C70MK2 is a substantial piece of kit. A 2.1-channel sound system, it combines CD and USB playback, DAB radio, with Bluetooth (v4.2) and Wi-Fi wireless connectivity. Appropriately, it will claim a significant amount of sideboard space for the privilege, and tips the scales at a healthy 8kg.

The system features a top-loading CD player with transparent cover. Playback is bolstered by proprietary High-Res remastering technology, designed to emulate the wide-band sonics of High-Res Audio. This tends to work better with older recordings. 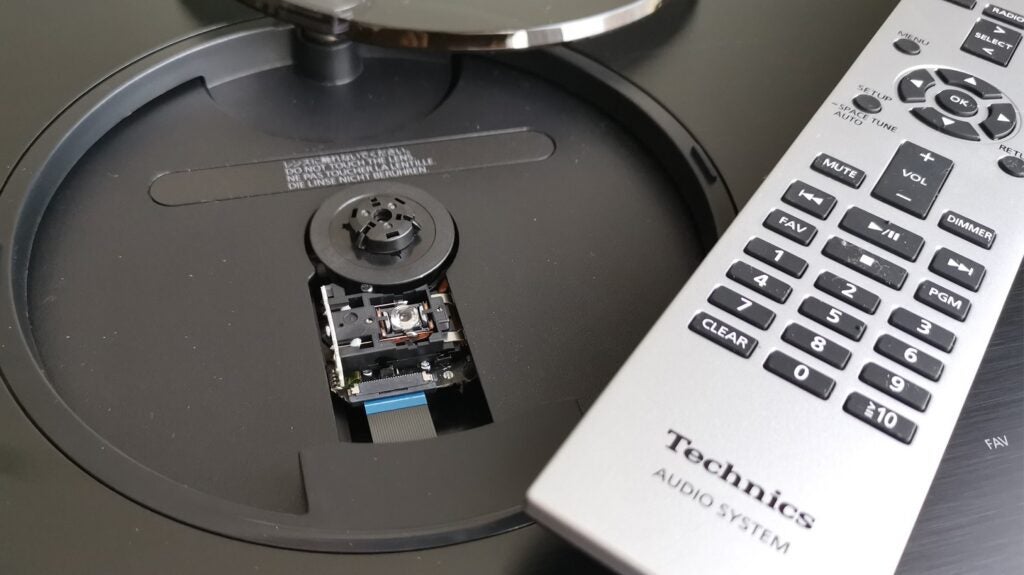 But for all its sophistication, installation is a bit of a chore. Perhaps we’ve been spoiled by smart speakers that can be added to a home network in minutes, but setup and Wi-Fi management here isn’t as intuitive as it should be. Ploughing through a wordy instruction manual, just to work out how to get online, seems archaic.

Consider us happy: the SC-C70MK2 is quite the entertainer.

In addition to that driver refresh, its tweeters have been re-voiced, making them more of a family match with Technics’ SC-C30 and SC-C50 systems. The presentation remains upfront, but some of the sharpness has been shaved off.

This second-gen iteration also exhibits greater driver synergy than its predecessor. This gives the system a gleeful bounce that makes the swagger of Oasis’s Supersonic seem authentically boozy.

The SC-C70Mk2 actually does a good job with dirty rock ‘n roll, and this isn’t something we thought we’d ever say about a Technics all-in-one.

All too often, compact systems such as this struggle with metal, unable to find nuance amid the noise. But incredulously, this MK2 knows how to mosh. The raging riffs of Slayer’s Angel of Death are cordoned off from the steamrolling percussion, the band’s propulsive energy well served by Technics’ digital power plant.

With 2 x 30W going to the stereo pair, and 40W assigned to the subwoofer, this system has no problem making its presence felt in an average-sized room. 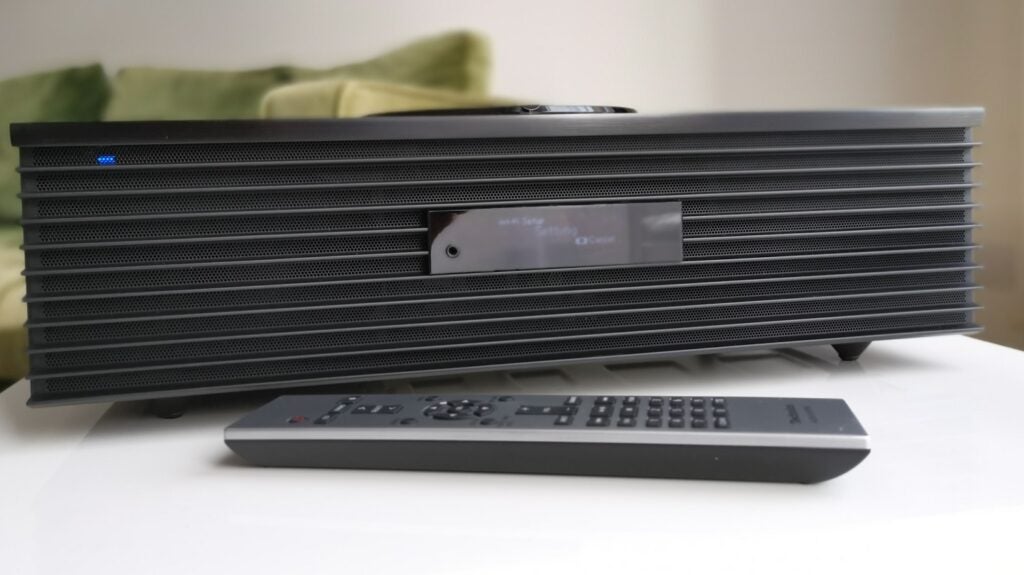 Admittedly, low frequencies have a tendency to clump together at volume, but it’s a transient niggle. John Coltrane’s interpretation of My Favorite Things suffers a little from this occasionally sloppy bass, but his sax is pitch-perfect, and that’s what really counts.

Koleyewon by Naira Marley really pushes the SC-C70MK2’s bass extension, but the Ottava f doesn’t flinch or distort. Similarly, Ryde by Niniola is full-bodied and rhythmic. The system’s fluent mid-range really comes to the fore on the dance floor.

We were surprised at just how genre agnostic the system is. Maximo Park’s Baby Sleep, from Nature Always Wins, enjoys an authentic gutty guitar tone that chops away beneath the sing-song chorus. The soundstage has a splendid liveliness, a presence that spreads beyond the confines of the chassis itself. The system plays big tunes brilliantly big.

Spinning One For The Ages, by Sparks, you get the impression that electro pop is another happy place for the SC-C70Mk2 – those new tweeters, with their light silk diaphragm, are pin-point precise.

Michael Nyman’s Chasing Sheep Is Best Left To Shepherds proves the point. With a nod to Purcell, strings and wind huff and puff, with each layer neatly flouncing atop each other with gorgeous clarity. The SC-C70MK2 doesn’t blur the lines. For a compact all-in-one, it’s bang on the neo-classical money.

If you’re looking for an all-in-one music system with serious audiophile DNA and an uncanny ability to flit between genres, the SC-C70MK2 is most definitely a worthy purchase.

The brand definitely needs to modernise its set-up routine, but the addition of Chromecast and Google Assistant support is a step in the right direction. There’s no doubt that this second-generation Ottava is an improvement over its predecessor, offering greater musicality thanks largely to a more homogenous driver array.

Overall, the SC-C70MK2 should be considered a very polished performer. It packs in a lot of Technics’ talent for the price.

You should buy the Technics Ottava f SC-C70MK2 if…

You should not buy the Technics Ottava f SC-C70MK2  if…