In a world where any version of Mario Kart exists, other kart racers are always battling amongst themselves for second place. I’d make a strong argument that Sega’s blue blur took that position with 2012’s Sonic & All-Stars Racing Transformed – and even argue that it remains a high watermark for the genre to this day – which puts the recently announced Team Sonic Racing under a potentially unflattering spotlight.

Developed by Sheffield-based Sumo Digital, Team Sonic Racing is a separate fork to the studio’s earlier Sega All-Stars racers. That means no crossover characters like Space Channel 5’s Ulala, Jet Set Radio’s Beat, or Super Monkey Ball’s AiAi, with the new game instead of focusing entirely on the anthropomorphic inhabitants of Mobius as they’re drawn into a story-based racing adventure.

Yes, there’s narrative to Sonic’s latest petrol head outing, although not one that was on show at E3 2018. What was on display was the team mechanics – a gameplay shift that changes how the game works as a racer, and one I can see being incredibly divisive to players.

In the adventure mode, you’ll choose from pre-set teams of three racers, and control one of each trio as your main character. Each team features one racer whose specialty is speed, one for technique, and one for power, their attributes affecting how each handles, and the power-ups that best complement them. 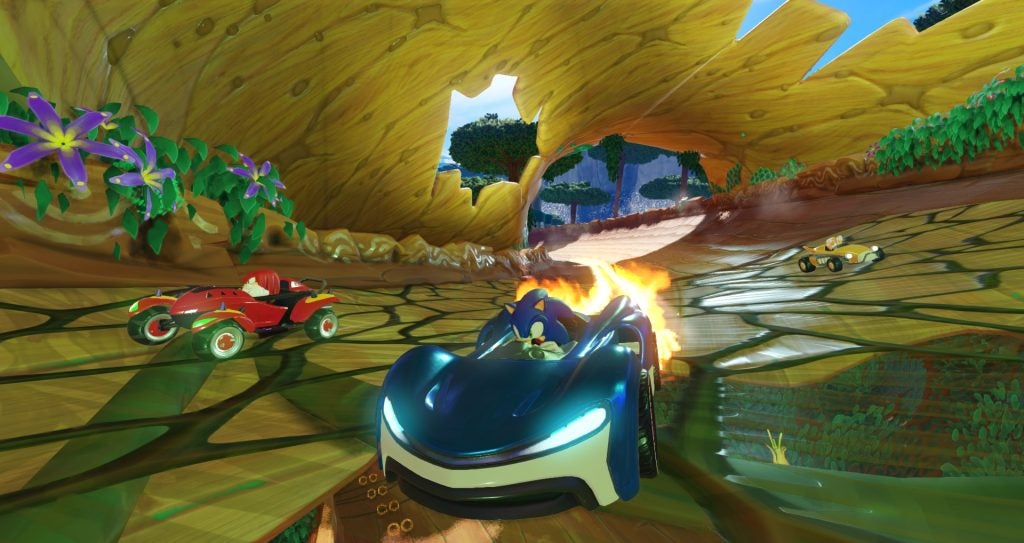 The E3 build had two teams on offer – Team Sonic, with Tails and Knuckles, or Team Shadow, with Rouge and Omega. Both are nice nods to Sonic Adventure 2’s Hero and Dark teams, with the latter swapping out Robotnik for Omega. It appears as though the final game will have five teams and 15 total characters to start with, as the selection screen had three columns of three characters each greyed out. I wouldn’t be surprised if the Chaotix team – Espio, Charmy, and Vector – filled one of those team slots, especially as Sega says the shift to purely Sonic­-related characters is in part because they better fit into teams.

Jumping into a race, Team Sonic Racing ticks a lot of the expected boxes for a modern kart racer: imaginative tracks, alternate routes, and plentiful power-ups to collect as you zoom around. One nice tweak is that you can not only pull off the expected boost starts at the beginning of each race, but you can stack up to three ‘charges’ for it if you time hitting the accelerator at the right time during the countdown. Miss just one though, and you’ll lose all your launch speed.

The group dynamic comes into play almost immediately though, with allies able to ride in each other’s trail to gain a speed boost or skim past a teammate to give them a boost in turn. Performing these ‘Team Actions’ fills an Ultimate Meter, which gives a massive, sustained speed surge for the whole team. The differences between speed, technique, and power racers are easily apparent too. Sonic and Shadow zoom ahead of the pack, but can be easily knocked around by other cars; Tails and Rouge have tighter controls and felt better able to pull off Team Actions; while Knuckles and Omega are slower but more powerful, capable of shoving other racers around.

You’ll want to make the most of those Team Actions to keep your whole squad ahead too, as the final result isn’t down to simply who passes the finish line first. Instead, the final track times for each individual member are combined, resulting in a team score. If you come first, but your teammates end up dead last, chances are you’re not going to win the race overall – hence that aforementioned sense of division for players. This is going to be a love-it-or-hate-it mechanic, potentially over-complicating the simple fun of kart racers. That said, this doesn’t feel like the sort of kart racer where just holding down the go-fast button will result in victory. AI racers put up a fierce challenge, and you’ll need to pay attention to their efforts to run you off the track. It’s actually surprisingly tough to finish in the top three. 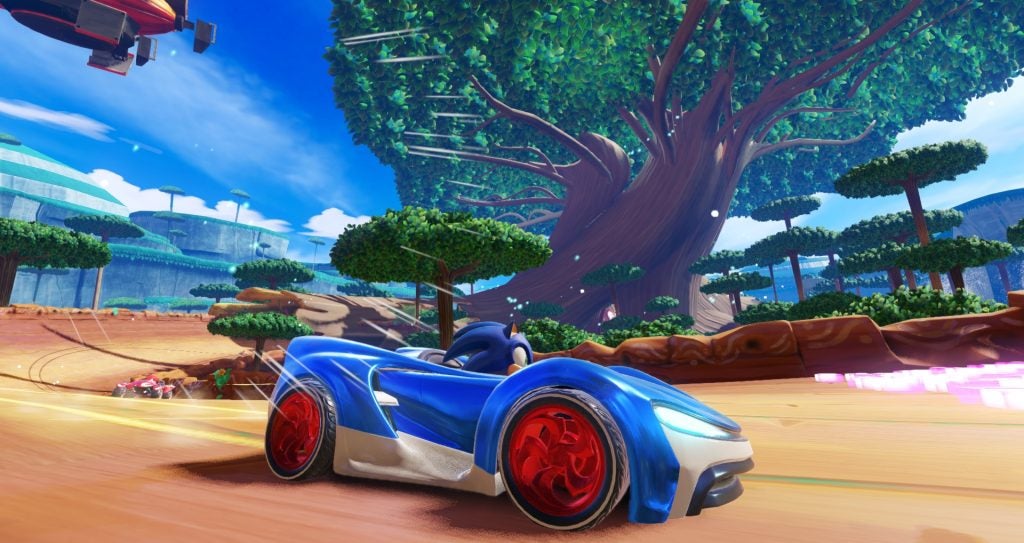 There are other tweaks to the kart racing formula that make use of the team structure, too. Items can be swapped between members with a tap of the circle button (on PS4), either sending an unwanted one you have to a partner who can make better use of it or requesting one when you’re riding on empty yourself. The items on offer at E3 weren’t terribly inspiring though, all feeling like stand-ins for Mario Kart power-ups – speed boosting Wisps in place of mushrooms, blocks instead of banana peels, and so forth. Hopefully, the finished product will have some surprises.

Away from the story mode, I was told by a Sega rep at E3 that Team Sonic Racing won’t be as restricted by the pre-existing team line-ups of the Sonic-verse. In the planned online mode, for instance, you’ll even be free to build a team featuring multiple instances of the same character – a triumvirate of Tails, if you like. There are also plans for vehicle customisation, with four blanked-out boxes on the racer select screen that are set to be used to mod your rides. I’m also told rings collected during the course of races are going to feed into the game’s economy, and while not confirming that Sonic’s virtual chop shop is where they’ll be spent, it seems a likely connection.

At the moment, I’m more concerned by what wasn’t on display. Only one track was playable at E3, and with a dearth of characters, items, and modes, it’s hard to get a feel for what Team Sonic Racing will really become– right now, it just doesn’t have the spark that Sonic & All-Stars Racing Transformed did.