Extra-terrestrials haven’t ever been quite as en-vogue as the 90s since The X-Files left the google- box, but iPod docks are doing their best to bring them back into fashion. With designs seemingly inspired by flying saucers, alien heads and ET’s mothership,  docks like the TEAC SR80i Mini Aurb and Philips DS9800 are here to add a touch of the other to your living room. Will you flee from their otherworldly vibe? 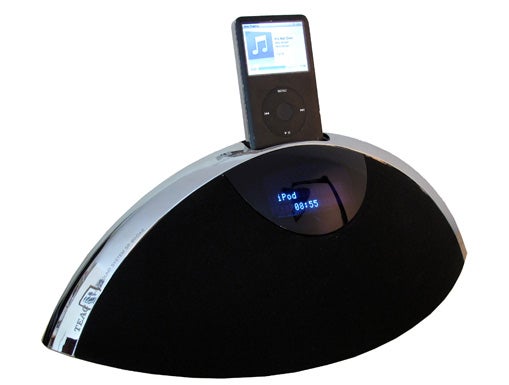 The TEAC SR80i Mini Aurb is the little brother of the original Aurb SR100i. It’s cheaper, lighter and smaller, and also features the DAB radio missing from the pricier model. The look is similar though – black and silver, shaped like the visible bit of an eye.  We’re in two minds about the design. It’s more eye-catching than a drab black box, but when its silvery sections are made from plastic rather than metal, and its display a dated-looking blue  LCD affair, we’re less inclined to give it the benefit of the doubt.

Its iPod dock, sitting on top, sticks out a little too clearly when not in use too. There’s a rubber bung you can jam into it to keep dust out of its nooks and crannies, but as this is black – conspicuous next to the silver trim – it’s not much help aesthetically. The SR80i doesn’t have the design confidence of the more imposing SR100i, and its look suffers a bit as a result. To get the design injection living rooms crave though, you usually have to spend more than the £150 asked for here. Whether you like the basic eye-ish design or find it an eyesore is like the Marmite test. Drop us your view in the comments, if you like. 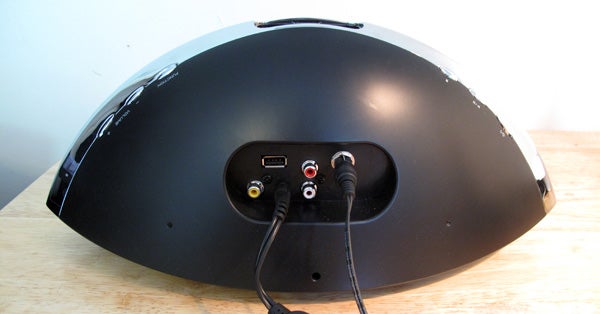 Aside from piping-out tunes from your iPod or iPhone, the TEAC SR80i also offers a DAB radio, FM tuner, USB MP3 playback and a phono auxiliary input. It will output video (in standard def) from your iOS device using the S-video output too. This is a very complete spread of options for a dock like this. All that’s missing is wireless music streaming and internet radio – and frankly both would be a nightmare to use given the interface used here. The two-line display is similar to that found on Pure’s portable DAB radios, but the self-consciously modern design used here begs for something a little more high-tech. 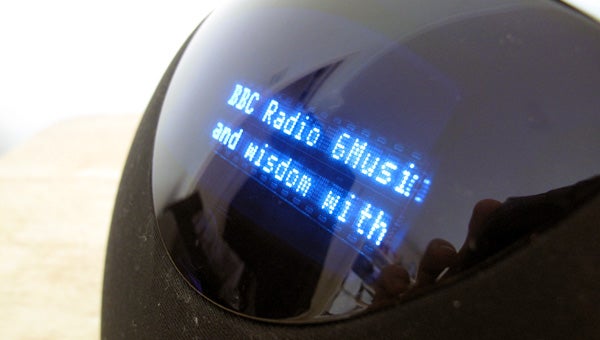 In a move that all-but admits the deficiencies of the archaic-looking LCD display, the TEAC SR80i relies heavily on its remote rather than an on-screen menu system. This puts features like equalisation at your fingertips, but also means you’re stuffed if you lose the remote, as the on-device buttons only give you access to the playback basics.

The ellipse-shaped remote is a cut above the low standards set by the average iPod dock zapper, but it’s still not great. The buttons aren’t discrete, like on a “proper” remote, and a few layout quirks mean it takes a little white to get used to. Still, it is a cut above most docks’ remote controls nevertheless.

Whether the remote has us prodding the wrong key occasionally, or the design has us  questioning if it has the courage of its convictions, fades into insignificance compared with whether the SR80i sounds good or not.

The TEAC SR80i is a mid-sized iPod dock. It’s not small or cheap enough to excuse anaemic bass, but its sound is still going to be limited by its size. The only real way to satisfy in this middle ground is to pack-in high quality drivers and hope for the best. It’s what the SR80i has done, and it has come up trumps.

At low volume levels, the TEAC is a bright-sounding system – a little wallflower-esque when compared directly with bigger docks like the DS9000. Like a choir singer just dying to blast out some rock ‘n’ roll though (yes we’ve watched the Sister Act movies too many times), it scales-up its sound remarkably well.  High-end detail and resolution is good from the off, and sibilance-free, but once you hit the 50 percent volume mark, the bass comes into its own too. Smooth, fairly rich and well integrated, it gives the SR80i a power we honestly didn’t expect to discover on first audition.

Larger docks with larger drivers will improve on this with greater scale and presence, but for a dock of its size and price, its performance is impressive. Very unusual for a lifestyle item like this, the tone controls are useful too. The remote control lets you tweak the bass and treble levels, -4 to 4 on each, and we even found that in the party zone (volume 50-75%) the SR80i benefited from a slight bass boost. We wouldn’t need many fingers to count the number of times a relatively cheap device like this has offered useful built-in EQ.

Boost the volume up even further, beyond the 75 percent mark, and things start to fall apart. Its two-way speakers pull off a good show, but with small drivers running the show, there’s only so much volume they can produce before showing the strain. To translate this into real-world terms – if your party has less than 25 people, the SR80i will cope with ease. If you’re revelling on a whole other level, you’ll need a bigger boat. 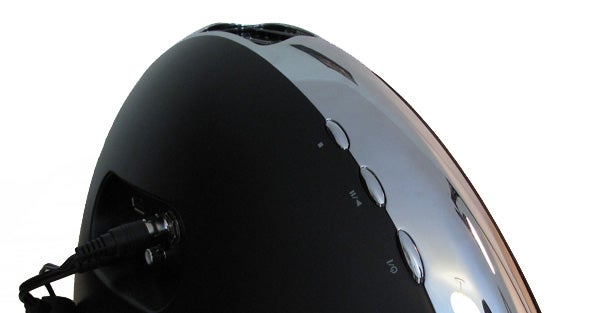 The TEAC comes up with excellent results in one of our standard “party” tests, Simian Mobile Disco’s Sleep Deprivation, supplying enough of a meaty bass thud to get neighbours riled-up, but it’s also fab as a more restrained kitchen DAB unit. That bright sound signature lends voices excellent clarity and isn’t hungry for more volume when handling music.

We couldn’t get as good a signal with the wire aerial as we normally can with a metal telescopic one, and while we can understand TEAC’s decision not to include one – it would dilute the look – we did wish there was one occasionally. As is, you’ll have to experiment with aerial positioning a bit.

The TEAC SR80i isn’t going to eclipse bigger and more expensive rivals like the B&W Zeppelin, Philips Fidelio DS9 and TEAC’s own SR100i, but its blend of great sound and quality features is hard to beat at the price. It sounds better than Altec Lansing’s efforts and the flexibility of its connections and radio skills help it to nudge past the JBL OnBeat dock. If you like the look, this is an excellent buy.

TEAC hasn’t many laurels to rest on these days, and the extra effort this has spurred-on is evident in the SR80i Mini Aurb. Its design could do with a slight tweak or two in our opinion, but it offers loads of features and a chameleon-like sound that means it can transform from a meek kitchen-top radio to something to turn your living room into a disco with a nothing more than an elongated press of the volume button.

Its relatively petite stature and drivers means it can’t compete with the big boys on sound, but on its home turf this lesser-known contender sure knows how to play.