Teac deserves a lot of credit. The Japanese company may not set pulses racing, but it has exceptional distribution channels making it one of the most visible tech brands on the UK high street. Its products aren’t without merit either, particularly in the dog-eat-dog sector of iPod docks where the Aurb and Mini Aurb have been notable highlights in recent years. Unfortunately 2012 isn’t off to such a good start…

The NS-X1 looks great on paper. Teac markets it as “the coolest, slimmest AirPlay System” and from a superficial perspective it has a point. Measuring just 55mm deep at its thinnest point (95mm at its thickest), the NS-X1 is certainly the most svelte AirPlay equipped dock we’ve seen to date and weighs only 2.1Kg. It also has a clean, almost retro, design aesthetic. For those living under a rock, AirPlay is Apple’s proprietary wireless streaming technology that allows Macs, iPads, iPods and iPhones to stream lossless quality audio to any AirPlay equipped speaker without the need for dongles or additional peripherals. 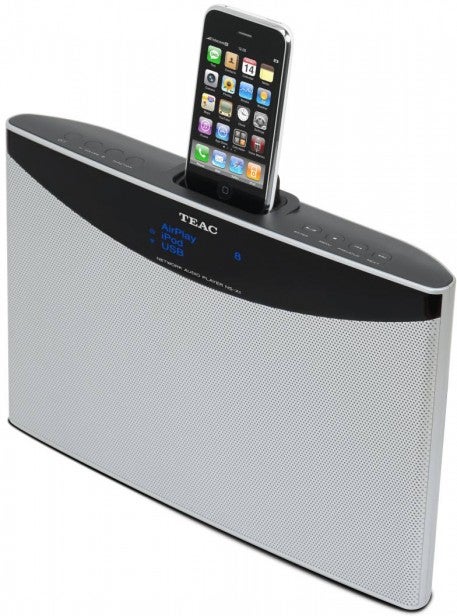 The trouble is high costs have limited adoption of AirPlay and products which do feature it often have high asking prices. Again the NS-X1 scores well here, coming in at under £200. Teac further raises the value of the NS-X1 with built in Internet Radio and PC streaming while the design is fully wall mountable. The NS-X1 stereo speakers aren’t earth shattering at just 2x 10W with Bass reflex, though an FM tuner, auxiliary and Ethernet inputs, DLNA compatibility and a bright OLED display suggest value for money.

Sadly, much as you should never judge a book by its cover, you should never judge a product by its spec sheet. While the NS-X1 looks the part, a closer look reveals the dock to be poorly constructed. This is a device built from top to bottom with low grade plastics: display, speaker grill, buttons, everything. The NS-X1 doesn’t feel as if it will fall apart in your hands, but hold it near its ports and the rear section creaks and clacks – the latter a sound that also describes the noise of using the control buttons along the top. The whole experience feels like an exercise in cost cutting. 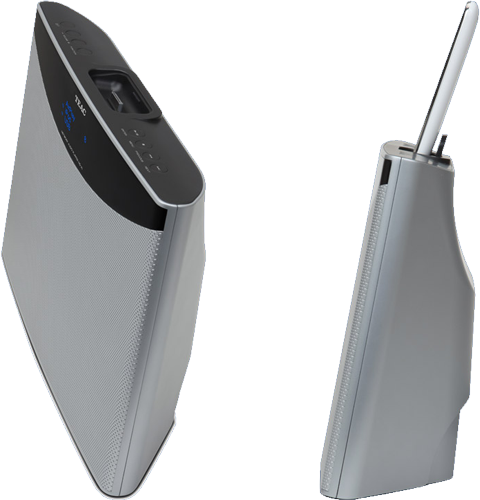 Of course the appeal of AirPlay and Internet Radio could make these cuts feel worthwhile, but here we hit another crucial flaw: ease of use. For all its convenience when up and running, AirPlay’s elephant in the room remains the difficulty in getting it setup in the first place. Teac’s own user manual has no less than three pages of instructions during which you’ll battle with DHCP, IP addresses, WPS, network keys and have to restart the NS-X1 a number of times. It must be stressed this isn’t Teac’s fault, it is an inherent flaw in AirPlay at this time though one we can see less tech savvy users struggling with.

Despite our grumbles, once setup AirPlay’s convenience is undeniable. It may be restricted to Apple devices and iTunes software, but it is a doddle to use and allows users to change the output from their player to the NS-X1 in just a few touches/clicks. Being able to walk in the house, take out your earphones, tap a few buttons on your iPod/iPhone and have your track continue streaming wirelessly on your home stereo is a joy which never gets old.

Similarly the vast array of Internet Radio stations means with enough searching there is something for everyone and Teac’s system of ‘bookmarks’ for your favourite stations is clever, stopping you mix them up with the presets on the FM tuner. That said while the NS-X1 does have WiFi, Teac has limited it to 802.11b/g, and their reduced range means you can’t take the dock as far from your router as you could if it were equipped with the newer 802.11n. With wireless n cheap to implement this is another unnecessary corner cut. 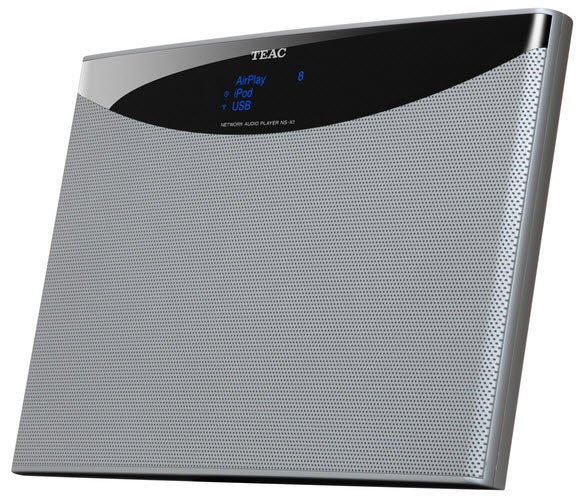 All of which means the NS-X1 needs to pull things out the fire with exceptional sound quality and sadly, it doesn’t. We mentioned its 2x 10W speakers could be a potential weak spot on paper and this is true in reality. While the Bass reflex technology produces reasonable bass for a device of this size the overall impression is music sounds muffled and it is hard to pick out individual instruments. Limited stereo separation hinders this further and at times the NS-X1 sounds more like a mono speaker as everything blasts out in a garbled mess. Then again ‘blasts’ is an inaccurate term, at maximum volume sound distorts horribly and keeping it together results in a realistic maximum well below what would be expected even for such a slim and light dock.

This is not the end of the problems. The NS-X1 takes an inordinate amount of time to detect an input source. For example, switch to a device connected to the auxiliary port or iPod dock and you’ll endure an inexplicable wait of up to five seconds – enough to make you think something is wrong. The dock also doesn’t intelligently switch inputs. Plug in an iPhone or iPod and it will sit on another function until you manually change it. Unplug the iPhone or iPod and it returns to the root menu meaning you’ll have to select the input once more when you dock your device next time. These are small irritants, but they add up to a great deal of frustration. 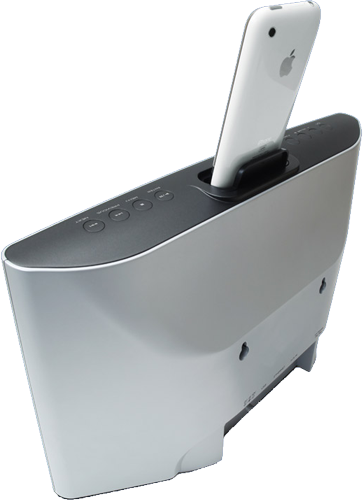 Which leads us to price. At £199 the NS-X1 is indeed an affordable AirPlay system, but it is heavily overpriced for the build quality and sound performance on offer. In fact in a straight shoot out the NS-X1 cannot match the build quality, volume or clarity of our current favourite ”portable” speaker, the £85, 400g Pasce Minirig and that says it all.

”’Verdict”’
Teac has had some notable successes with docks in the past, but the NS-X1 falls short. The appeal of the NS-X1 lies in being a slim line dock with AirPlay and Internet Radio for under £200, yet look closely and the sums don’t add up. Build quality and materials are a disappointment and sound reproduction is muffled and distorts badly at mid to high volumes. Similarly while Internet Radio is a nice inclusion it may as well be attained through an Internet radio app on your iPod or iPhone or by streaming from iTunes. Being brutally honest the NS-X1 isn’t so much a bargain AirPlay dock, but a budget dock which adds AirPlay for a non-budget price. Teac can do better, so can you.