Whenever the word ‘rugged’ is mentioned in conjunction with an item of technology, a primitive urge stirs inside me and a tingle of excitement shivers down my spine. Almost immediately, the Johnny Knoxville in me (doesn’t everyone have one?) begins to devise all manner of evil schemes and increasingly elaborate test scenarios designed to test the mettle of such claims.


I imagine driving over it with my two-ton MPV and stamping on it with a pair of ice skates. I dream of dropping a caravan on top of it and immersing it in freezing dry ice. I fantasise of putting it straight onto a searing hot barbecue, cackling and rubbing my hands together with glee as I picture the plastic melting and the battery going ‘boom’. 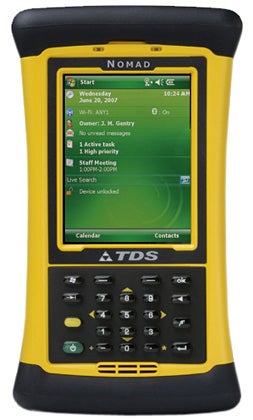 Strangely, however, when I propose such ideas to manufacturers they’re usually less than enthusiastic and keen to stress that, when they mean ‘rugged’, they actually mean ‘ever-so-slightly less prone to break when you drop it in the street’ than your average piece of throw-away technology.


Which was why I was that bit more excited than normal to get my mitts on Tripod Data Systems’ ‘rugged’ Nomad 800L. Why? Well, despite the fact that it runs bog standard Windows Mobile 6 and has a list of specifications you’ll probably find quite familiar, this is no ordinary ‘rugged’ piece of kit. More importantly, perhaps, its manufacturer was happy for me to bury, submerge, bake, freeze and generally treat it with casual violence in order to prove how tough it really is.


It certainly isn’t aimed at your average office worker. Apart from being too bulky and heavy to appeal to techno-fashionistas, the Nomad is simply too expensive for the average suit. This is aimed at those who, normally, can’t use the technology that city types can in the field because it’s simply too fragile or the conditions they work in are too harsh. From oil rig workers to couriers, nomadic elk herders and technologically savvy camel traders, there’s a whole swathe of workers out there who could benefit from computing power that doesn’t give up the ghost outside the benign conditions of a western city.


To that end it has been designed to work at temperatures from -30 to 60 degrees Celsius, survive for 30 minutes under a metre of water, withstand drop impacts, vibration and work at altitudes of up to 15,000ft. The trouble is my visits to the Arctic tend to be quite sporadic these days, I don’t have a desert in my back yard and flying at 15,000ft in an unpressurised plane cabin isn’t something I generally tend to do in my spare time. So I had to get a little bit creative with my testing.

First off, the Nomad took a trip to the Arctic tundra that is my freezer. Now, since most domestic freezers can manage a temperature as low as -18ºC, I figured this would be a demanding enough test. And since most other pieces of technology I’ve been skiing with usually seize up when it goes below -10ºC, I figured it would certainly prove a point. 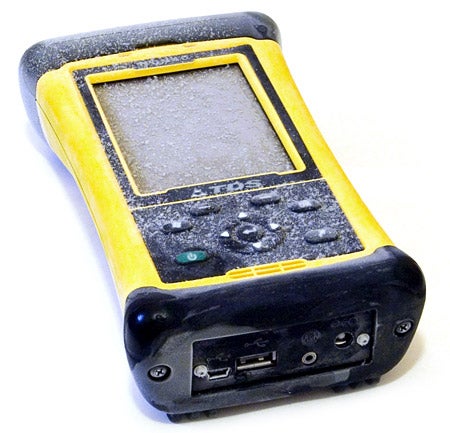 I took it slow at first, checking every 15 minutes that everything was okay. But two hours and a can of beer later, I decided recklessly to go the whole hog. I left it in overnight. As you can see from the pictures, it was pretty frosty the next morning, but when I hit the on button it fired up no problem and I was able to browse my contacts and connect to my Wi-Fi network straight away.


I wanted to give it a bit of a beating too, so I buried it in the (somewhat damp and mouldy) sand of my two-year-old’s sand pit. Next I chucked it into a hole in the vegetable patch. I dropped it on carpet and concrete, soaked it in a steaming hot shower and submerged it in the kitchen sink. I was about to drop kick it into a pool of boiling builder’s tar when I thought better of it – it’s so solidly built, I’d be more likely to break my foot than do the Nomad any damage. 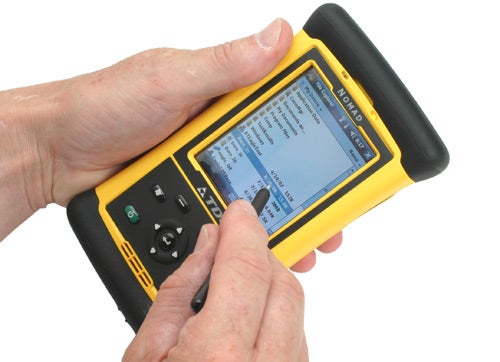 Remarkably, it shrugged off every assault with barely a mark on it, until I unintentionally went a step too far and ground a piece of old brick directly into the Nomad’s screen in the vegetable patch test. Even then it survived with just a light scratch when most other so-called rugged items of technology would have given up the ghost and cracked, quite literally, under the pressure.

It’s certainly very impressive and as hardy an item of technology as you’re likely to find anywhere, but let’s not forget that under all of its bright yellow armour and rugged braggadocio, there lives a humble PDA. And it would all be to no avail if it was difficult to use and a poor performer in the field. 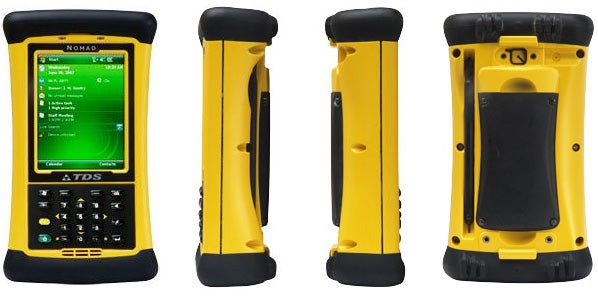 Fortunately, it’s highly capable here as well. It would be useless in the subzero temperatures of the Arctic, for instance, if you couldn’t read the screen in bright sunlight. But the bright 480 x 640 resolution TFT screen is just as readable outside as it is indoors.


Likewise, you might as well feed it to a polar bear if the buttons weren’t usable with gloves on, and the Nomad does reasonably well here too. Though the buttons are small, they’re mostly well spaced, which means it’s simple to press one without hitting another. I say mostly, because the directional pad in the centre of the control panel could have been larger. As it stands, it’s a little on the small side and I found it fiddly to use precisely with thick ski mitts on. 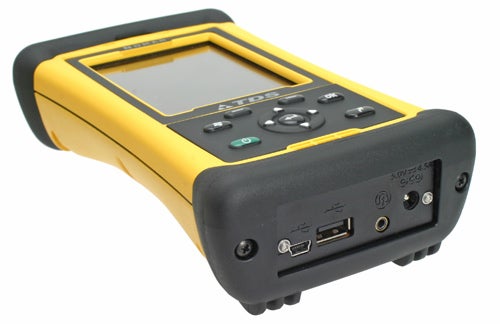 On the other hand, the luxurious metal stylus with its hefty weight and spring-loaded tip is easy to grip, if a little difficult to extract from its magnetised slot when your hands are fully gauntleted against the chill. And the elasticated strap on the back makes it easy to get a decent grip on it, even in wet and slippery conditions.


And battery life must be good too, if a device is to be relied upon when out in the wilds far from power. Luckily, the 5200mAh unit supplied with the Nomad is a trooper, with well over a third of its capacity still registering after three days of testing.

Even if you take a step back and consider the Nomad without your hardhat on, you’ll most likely be impressed. Under the hood, an impressively quick 806MHz Marvell processor drives things along at admirable pace and there’s a reasonable 128MB quota of RAM onboard plus a generous 1GB of flash storage built in. 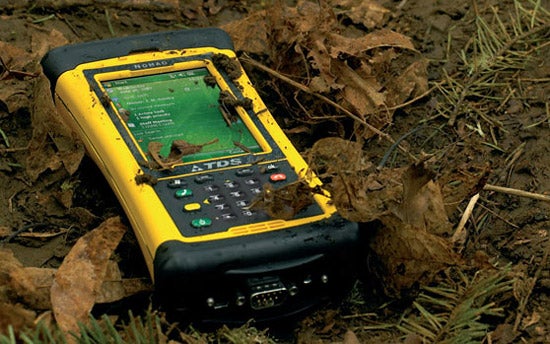 Expansion potential is good too, with a Type II CompactFlash slot and SD card slot under a sealed and screw-secured top cap, and full-size and mini-USB sockets on the base of the unit. Just make sure you blow the sand out before you attach to the latter because they’re not protected with any form of flap or cover.


And, needless to say, there’s a whole raft of extras and options you can use to expand the Nomad’s capabilities. Bluetooth comes as standard, as does wireless 802.11b/g and, of course, an integrated GPS receiver. If you’ve got your own CompactFlash accessories that you want to use and these don’t quite fit under the cap, TDS has thoughtfully designed an extended version. 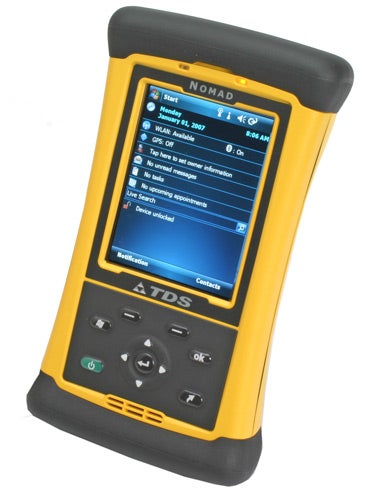 There’s an option for a camera, in case you need a photographic reference from a field visit. You can also fit it with a battery pack that will take AAs – for those times when you just can’t get to a plug socket – and it can be specified with a laser bar code reader – ideal for all those courier drops in the wild reaches of northern Siberia, or simply if you’re a butcher who wants to do a stock take over Wi-Fi from inside your walk-in freezer.


The Nomad is no ordinary PDA. It’s built like the proverbial brick outhouse and can take a hell of a lot of abuse. The screen is the most vulnerable area, but the odd scratch doesn’t stop it working and, more importantly, it doesn’t crack under pressure. It’s also the most expensive PDA I’ve ever seen at over a grand, plus it’s heavy at nearly 600g and very bulky. But if your business has a need for a tough piece of technology that’ll work outdoors without seizing up, or your staff work in extreme environments, it fits the bill nicely.


Now, where did that blowtorch get to?